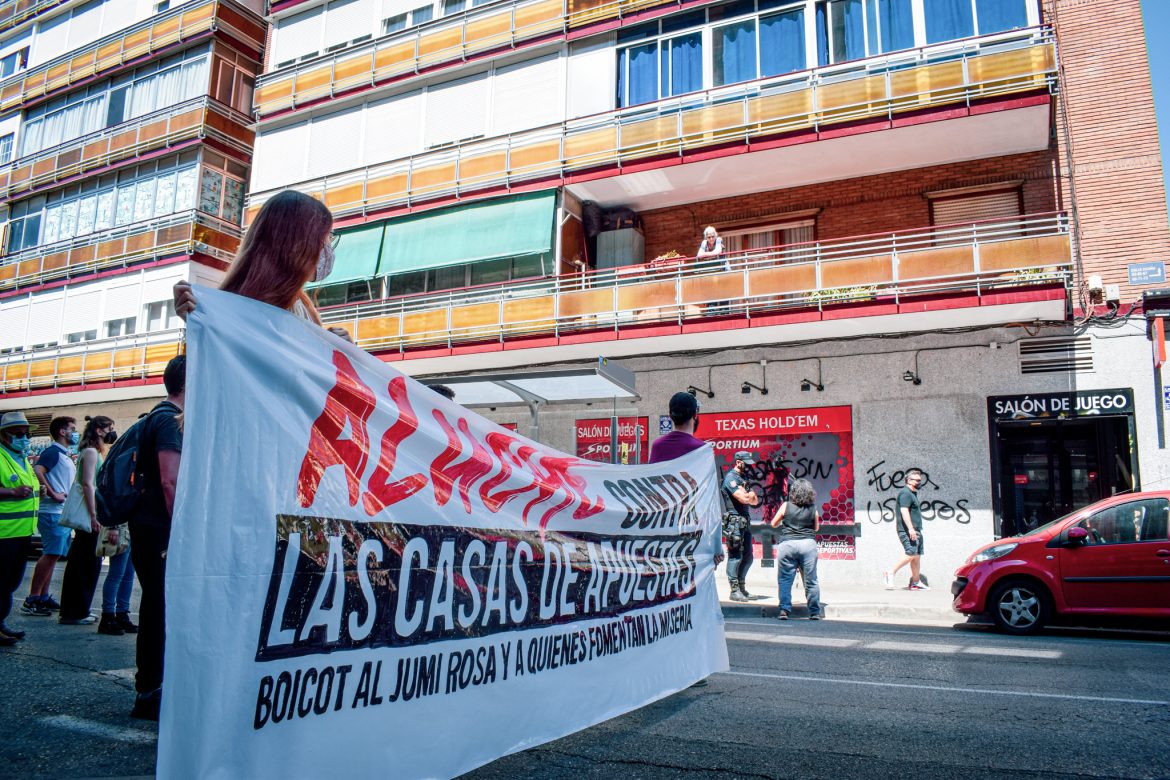 Historically, the gambling industry in Spain has always been significantly smaller than in other European countries but, after the 2008 financial crisis when youth unemployment skyrocketed, the industry began expanding both in person and online, and targeting young people in particular.

The result is youth addiction, which echoes the heroin epidemic of the 1980s, during which Spain’s GDP growth rate slowed to levels similar to the 2008 crash. Back then, addiction destroyed the lives of many young Spaniards and gambling is increasingly – and not unreasonably – being referred to as the “heroin of the 21st century”.

In the city Madrid, gambling has disproportionately affected the poorest. Three quarters of the city’s casas de apuestas are situated in its four lowest-earning districts: Carabanchel, Usera, Villaverde and Puente de Vallecas. And, while many here plunged deeper into poverty, loosing their jobs due to pandemic-related cutbacks, betting shops have thrived. Large corporations have continued their rapid expansion over the last year and the number of casa de apuestas in Madrid has increased from 375 in March last year to 407 in April this year.

One of the greatest fears is what the outcome of the sudden influx of gambling will have on the future of Madrid’s youth, especially when a study carried out by the region’s own health department showed that 22% of 14 to 18 year-olds in the city have gambled in person, despite under-18s being prohibited from entering betting shops.

A ban on betting shops

Cities across Spain have started to take action. Barcelona announced a ban on the opening of new betting shops within a 800m radius of educational centres, in effect meaning that no new sites can be opened. However, in Madrid, the PP-run city council have made no such commitments, with all three right-wing parties having refused to incorporate stricter policies on the casas de apuestas into their 4 May election manifestos.

As this epidemic of ludopatía (gambling addiction) continues to spread through the city’s youth, the task of combatting the danger has, once again, fallen to the kids of the barrios themselves. In responding to a problem that they’ve seen affect their own friends and classmates, the fight against the betting shops is being led by youth collectives who are aiming to create greater awareness of the issue.

Last month, a crowd of around 500 residents in Barrio Aluche gathered to demonstrate their opposition to the now- 14 casas de apuestas in their neighbourhood. Here, I met David Moreno, 19, and Ismael Clark, 20, who explained that a previous protest had been successful in stopping one betting shop from opening altogether.

Ismael told me about his school days and how many of his classmates (under 18 at the time) would head to the nearest casa at break time to try and make some quick winnings. Whilst it may have started with just a few euros, for some it spiralled out of control with one case of a student even stealing from their parents in order to gamble. Most shockingly, Ismael comments that out of everyone in his class, just two or three of the boys had never gambled.

Meanwhile, David, who is a spokesperson for the movimiento vecinal against the casas, explained that the hope of the groups is that through different means of action, they can create wider consciousness in the barrio about the youth gambling problem and the reasons behind it. He emphasises how the presence of so many casas in combination with such relaxed security rules and the widespread advertising that young people are exposed to makes for such a potent danger to the youth.

The youth fight continues, but these young people are all too aware that there’s only so much they can do to raise awareness of gambling addiction themselves while also putting pressure on the government. Therefore, the regional and municipal authorities must take action – they’re the only ones who have the relevant powers on this issue, and who can ensure that age limits are better enforced and stricter policies imposed in order to limit the rise in youth gambling addictions in Madrid’s barrios.

While president Ayuso, mayor Almeida and the Partido Popular dismiss this issue, Madrid’s youth continue doing all they can to hold back their friends from gambling addictions in any way they can, from the grassroots.

This article and photos are by Freddie Scott, a freelance journalist and photographer from England but now very happily living in Madrid. Over the last year, Freddie has been following social and political movements in the barrios of the South of Madrid and publishing pictures and stories to his social media account, The Other Madrid. Follow Freddie on Instagram at @the_other_madrid.

Madrid’s youth fight back against the gambling epidemic invading our barrios was last modified: July 22nd, 2021 by Madrid No Frills
Share:
Previous Post