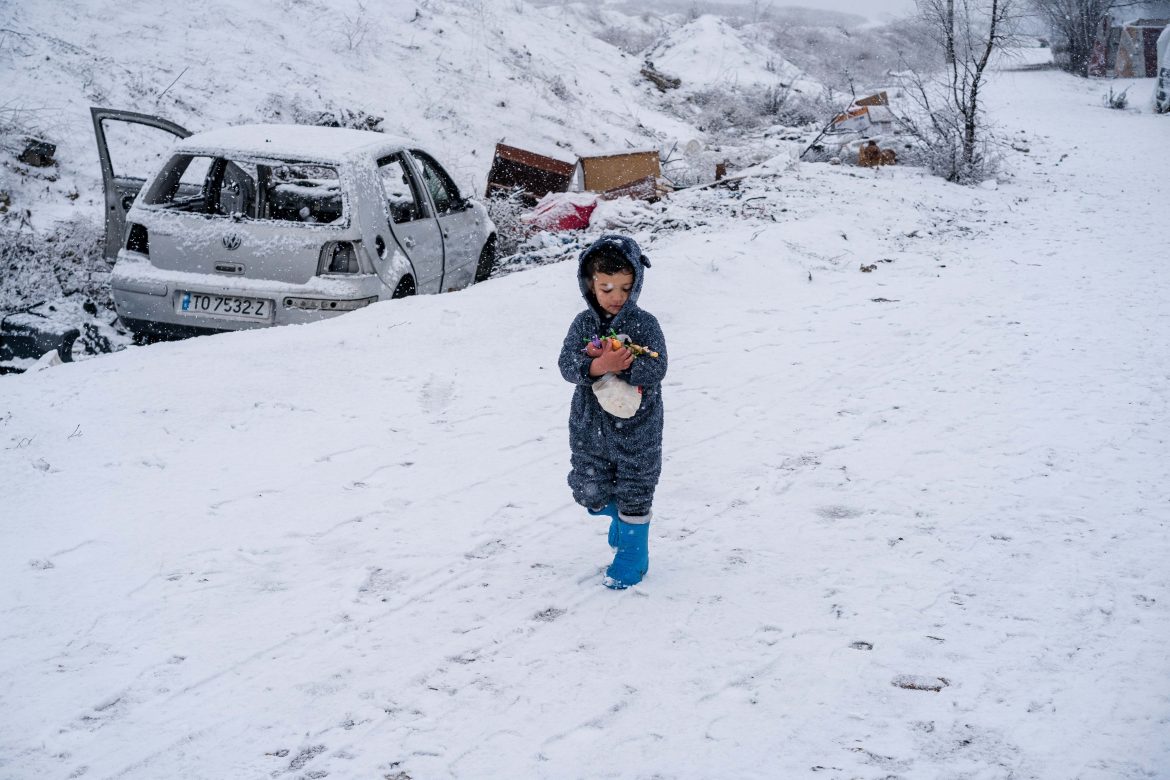 As Madrid plunges to -11°C this week and sees historic snowfall that is predicted to be the most snow this century will ever have, children of the Cañada Real Sector 6 forget their traumas for a moment and enjoy the magic of their world in white.

After three months and six days without electricity due to abusive neglect on the part of energy company Naturgy and the Regional Madrid Government, momentum surrounding the neighbourhood’s situation is finally gaining speed. Every Spanish newspaper has now raised the alarm as well as most mainstream international newspapers, and profound independent art stunt by Boa Mistura involving 4000 candles spelling out “NOS ESTÁN APAGANDO” (they’re switching us off) has once again put the Cañada on Madrid’s radar.

As a result of all the noise, solutions have finally been offered, but they’re not exactly what residents had in mind.

With the historically low temperatures arriving this weekend, Mayor Almeida probably suspects people are going to die, so he’s suggested a mass transfer of residents to temporary sheltered accommodation – the same as what has been offered to rough sleepers in the capital. Sector 5 & 6 residents will be offered rooms in hostels and beds in an old furniture factory, and there are rumours that the Red Cross is trying to open up the trade fair space IFEMA to accommodate hundreds more, all instead of switching back on their electricity, which they pay for.

Although some residents are just relieved that the authorities are “finally thinking of us”, the neighbourhood has widely rejected this offer. The association of Cañada Youth explained to me,

In the first place, this is not a real solution, we do have homes, what we do not have is electricity. This is a strategy to move the focus of attention, there are not even 300 beds there and now with COVID-19, how do you intend to put 4000 people there? It is irrational of course.

Instead, they will continue fighting for their long-term rights, not a quick fix that would allow the Madrid Regional Government to tick a box, and which residents believe would cause more harm to their children than if they stayed in their homes.

The residents of the Cañada are not homeless; they have homes. They simply want their homes to be recognised as homes and have their electricity switched back on, just like everyone else in Madrid.

THIS IS AN EMERGENCY

Over the past few months, I’ve posted more about the Cañada than I’ve ever posted about any single topic because this is an emergency – a human rights emergency during a State of Emergency – and I’ll keep going on about it until their electricity is switched back on. This is exactly why I created this platform and why I have worked consistently for four and a half years to reach more and more people, so that marginalised communities – whose reality is constantly drowned out by discrimination – can be seen, heard and understood by a diverse, caring and open-minded audience.

If you support what I do, and what the people of the Cañada are fighting for, please share their story with everyone you know because making noise works.

Do it for him…

You may have noticed that I don’t run ads or do sponsored posts, yet all articles are freely available to everyone, everywhere, all the time. That’s because I, Leah, created this blog with one intention: to provide a further space for communities to speak up and speak out and with absolute refusal to let rich brands and those in a position of privilege influence what I publish.

This platform will keep telling those hard-hitting stories of inequality and discrimination, keep pushing against capitalism and keep delivering the independent journalism this city so badly needs without anyone telling us what we can and can’t say.