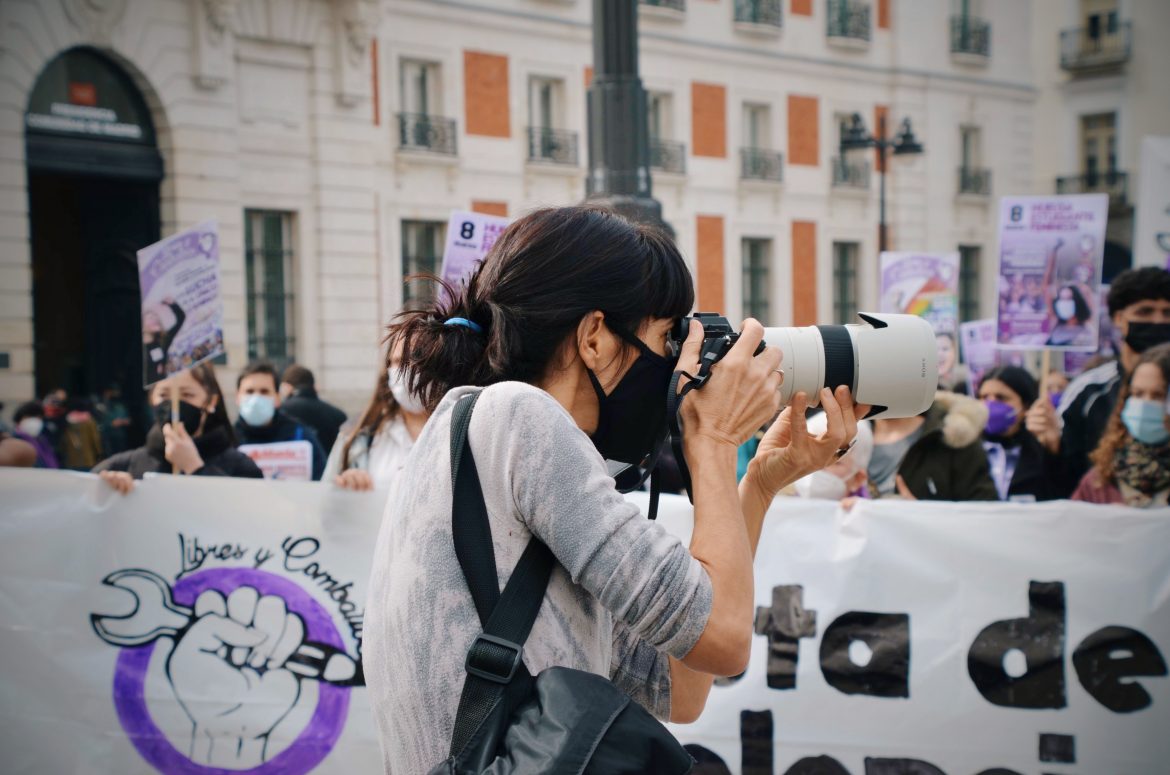 Take a close look at the photo below. Do you see anything off-balance?

Of all the photographers in this scene which I captured at one of this year’s unofficial Women’s Day protests, only two are women. In fact, just 15% of photojournalists are women. That’s the distribution you can see in the photo above.

At every protest I attend in Madrid, I’m one of very few women holding the camera. You’ll probably find me crouching down on the ground, as many women photographers do so as to not get in anyone’s way. Perhaps this is why our images are different, why they have an alternative perspective to what we’re normally shown in the media.

Why is representative discourse important?

The press holds a lot of social power in the world and this power should be held by the full spectrum of society. Representative discourse does not yet exist because women and other marginalised groups are too often not the ones holding the camera, the pen or the mic.

In practise, representative discourse is centred around trust and understanding. For example, a woman is more likely to be accurately represented by someone who has lived similar experiences to her, who might have experienced sexism, objectification, misogyny or patriarchal career setbacks. In knowing that the person interviewing you hears you, or that the person taking photographs of you sees you, you feel more at ease and are more likely to feel safe and empowered to explain yourself accurately. As another example, a migrant is more likely to be accurately represented by someone with a migrant background: an understanding of racism, cultural differences and fear of the authorities.

As much as a journalist may do their best to accurately represent their subject, the subject’s voice and image is still going through that of the journalist, and unconscious bias comes into play. I’ve been on both sides: I’ve interviewed and been interviewed, and when I connect with the subject or the journalist, the story unfolds in the most magical way.

How can you help ensure representative discourse in the media?

Learn who took the photo, who wrote the article, who held the mic, and celebrate their work. Below is a concise list of local women, trans women, non-binary journalists, photographers and collectives whose work and perspective I admire and value. Their work covers everything from women’s rights, trans rights and migrant rights to the Covid-19 crisis, racism, extreme poverty, politics and more.

Follow them, share their pictures, celebrate their view on the world and we will come that bit closer to equality. And keep this list bookmarked as I will be adding to it constantly as I meet more and more women journalists whose work needs celebrating!

HELP ME SPEND MORE TIME ON MADRID NO FRILLS

✊🏾 Today is the one-year anniversary of Spani