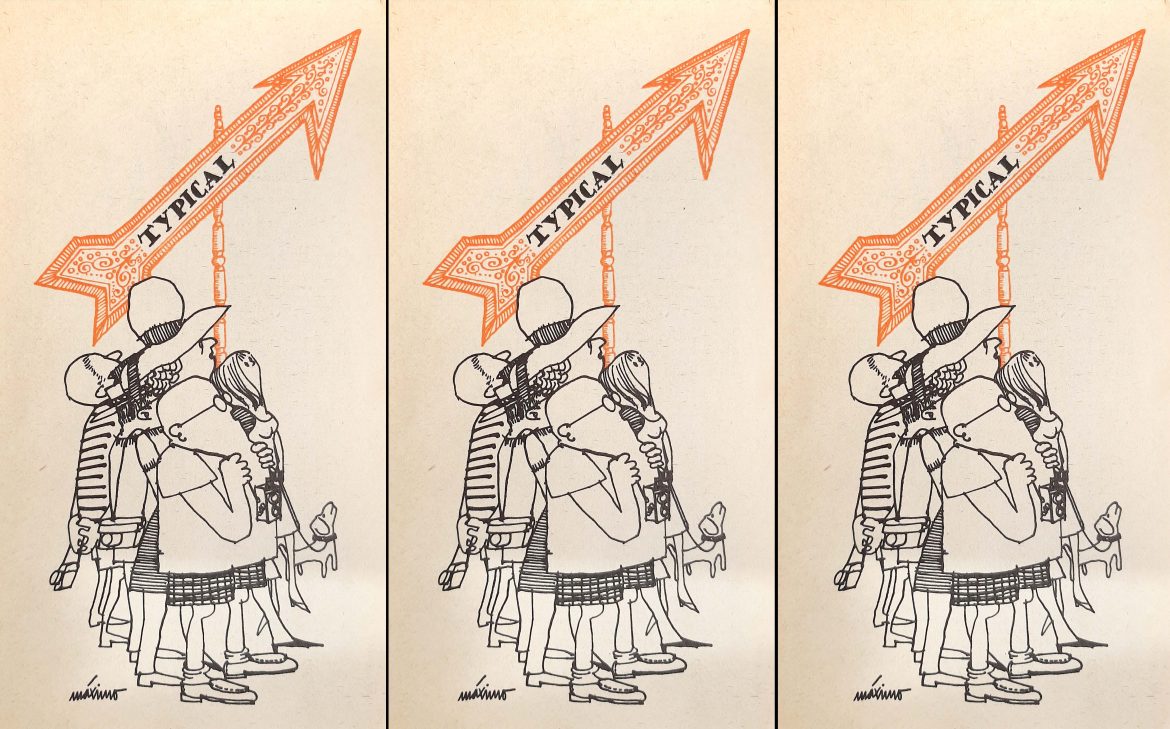 Just as Spain was finally starting to recover from its last financial crisis, the deepest recession we’ve ever witnessed has only just begun. Poverty, inequality and reliance on precarious work inflicted by a decade of government-imposed austerity remains all around us, and the few tourists that trickle in today – just as their pre-pandemic forefathers did – continue to feed into this.

Tourism was Spain’s miracle antidote to the 2010 recession, spearheading the country’s recovery – many believe. Between 2012 and 2019, there was a 26% increase in the number of visitors to Madrid, with over 10.4 million last year alone. Tourists would spend a lot of money, especially foreign visitors who, until the pandemic, accounted for 55% of all tourists to Madrid. Chinese, American and British tourists, in that order, topped the spending charts, and the average visitor spent an average of €270 per day bringing in a total revenue of around €10.5 billion in Madrid alone.

Cristina, 38, is a singer from Malaga and has been living in Madrid for 14 years. “I am from Fuengirola, where our motto is “A smile to tourism”. My father has been a receptionist for most of his life. He started working as bellboy and is now the deputy head of reception at his company. Thanks to tourism, a man like my father, who was hungry as a child and who has a thick accent has learned to speak six languages ​​by dealing directly with foreigners, and being able to afford private classes. A person like him, who comes from a traditional and humble background was able to become a self-taught polyglot and is very open minded for his age and place of origin.”

The Tourist Saviour Complex is a new term. I just invented it, so I’m also going to define it:

Tourist Saviour Complex is the belief that seemingly underprivileged locals can be saved, educated and granted opportunities by tourism that the very tourists they’re serving take for granted.

What has been overlooked during a decade of this supposed win-win situation is that there’s a loser.

“It’s kicking people out of their homes, including elders with a pension that cannot bear the price increases, because money is worth more than people, and because tourism brings money”, Cristina continues.

Lavapiés has seen one of Spain’s most rapid rent increases due to speculation and tourist rentals removing property from the local market. Between 2018 and 2019, the average cost of rent in Madrid increased by almost 60%, which is significantly more than the already-high nationwide average increase of 7% in this same period.

Tourism is an important sector for the Spanish economy. Before lockdown, it represented 12% of Spain’s GDP, whereas now, it’s only just recovering to a fraction of that. But while recovery happens, it’s important to remember that mistakes were made during the recovery of the 2010 financial crisis and the country’s dependence on tourism was one of the biggest.

According to a report released by the Madrid City Council last year, there were more than 22,000 tourist apartments in Madrid at the time, more than half of which are located in Madrid Centro. Of stays last year, it must be pointed out that 37.5% were Spanish and 62.5% were all other nationalities (US 19.6%, France 9.4%, UK 8.4%, Argentina 5.7%, Italy 5.6%, Germany 4.7%, Mexico 4.6%, Brazil 3%). National tourism is part to blame for the damage tourist rental apartments are having on neighbourhoods, and this should not be overlooked.

Before the pandemic, tourism had a visible dark side. “Tourists Go Home” was spray-painted on facades all around the city centre, and the anger towards foreigners in general continues as can be seen in the picture below of a new hotel in Lavapiés, which says “Fucku guiris. Refugees [welcome]”. 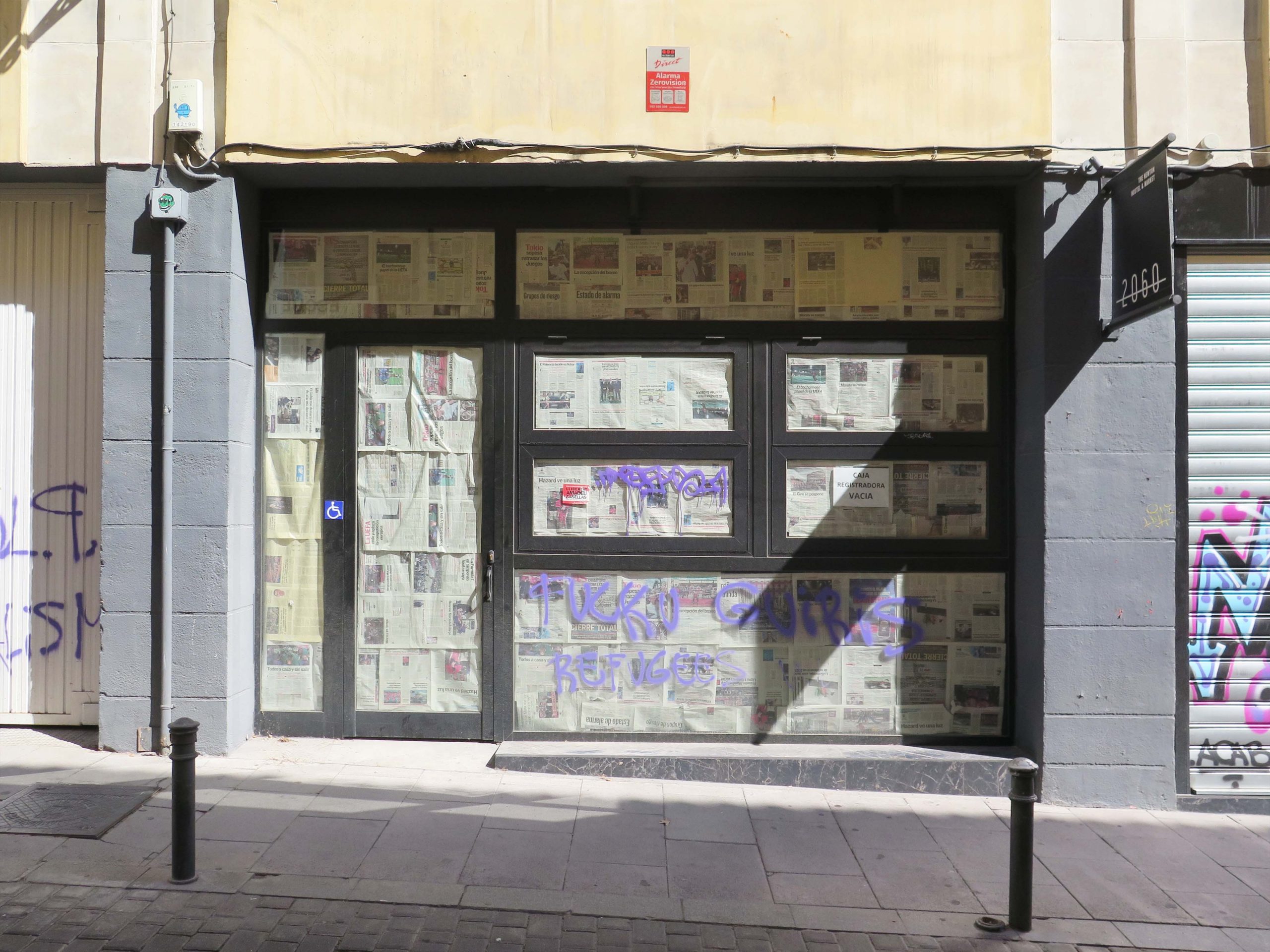 Local foreigners are often mistaken for tourists and are also frequently blamed for causing gentrification through the common belief that they are willing to pay higher prices for coffee, food and rent. In recent years, an increase in xenophobia towards Guiris is undoubtedly connected to international vulture funds buying up housing and evicting residents.

Between 2013 (when the authorities started to collect statistics) and June 2019, there were 237,032 rental evictions in Spain, many of which involved families, and many of whom are single parent households headed by women. 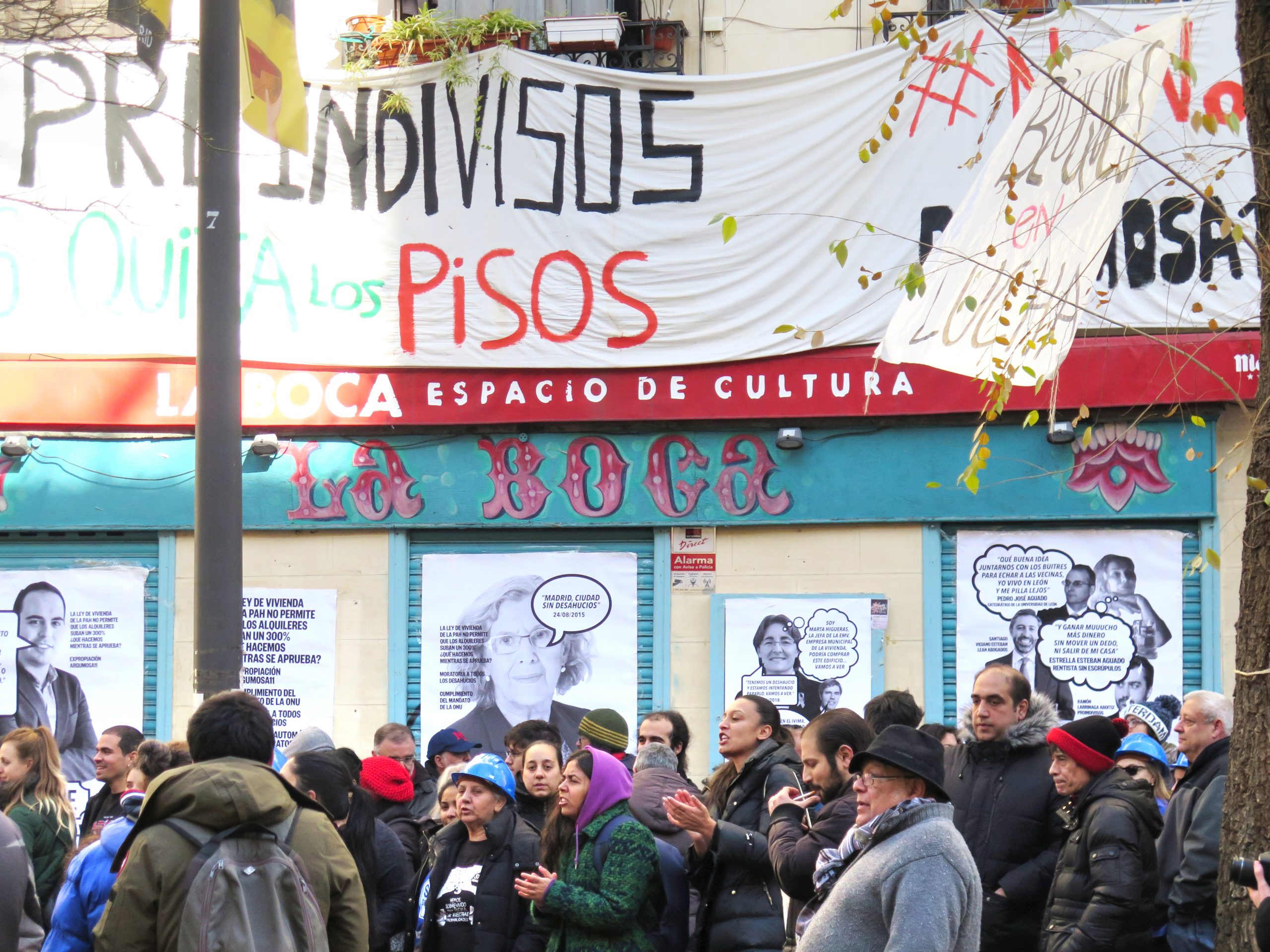 This shortage of social housing has had a devastating impact on low-income families, especially those who have been evicted. The lack of adequate social housing stock has meant that many families have had no choice but to seek housing in the private rental market where they have to pay higher rents, pushing them even closer to the breadline and another eviction.

Despite this obvious scarcity in social housing, Madrid City Council sold 4,800 social housing units to foreign investment trusts Goldman Sachs and Blackstone. At the same time, 153,000 flats lie empty across Madrid alone, according to Idealista, which was painted on a sign at a recent protest. 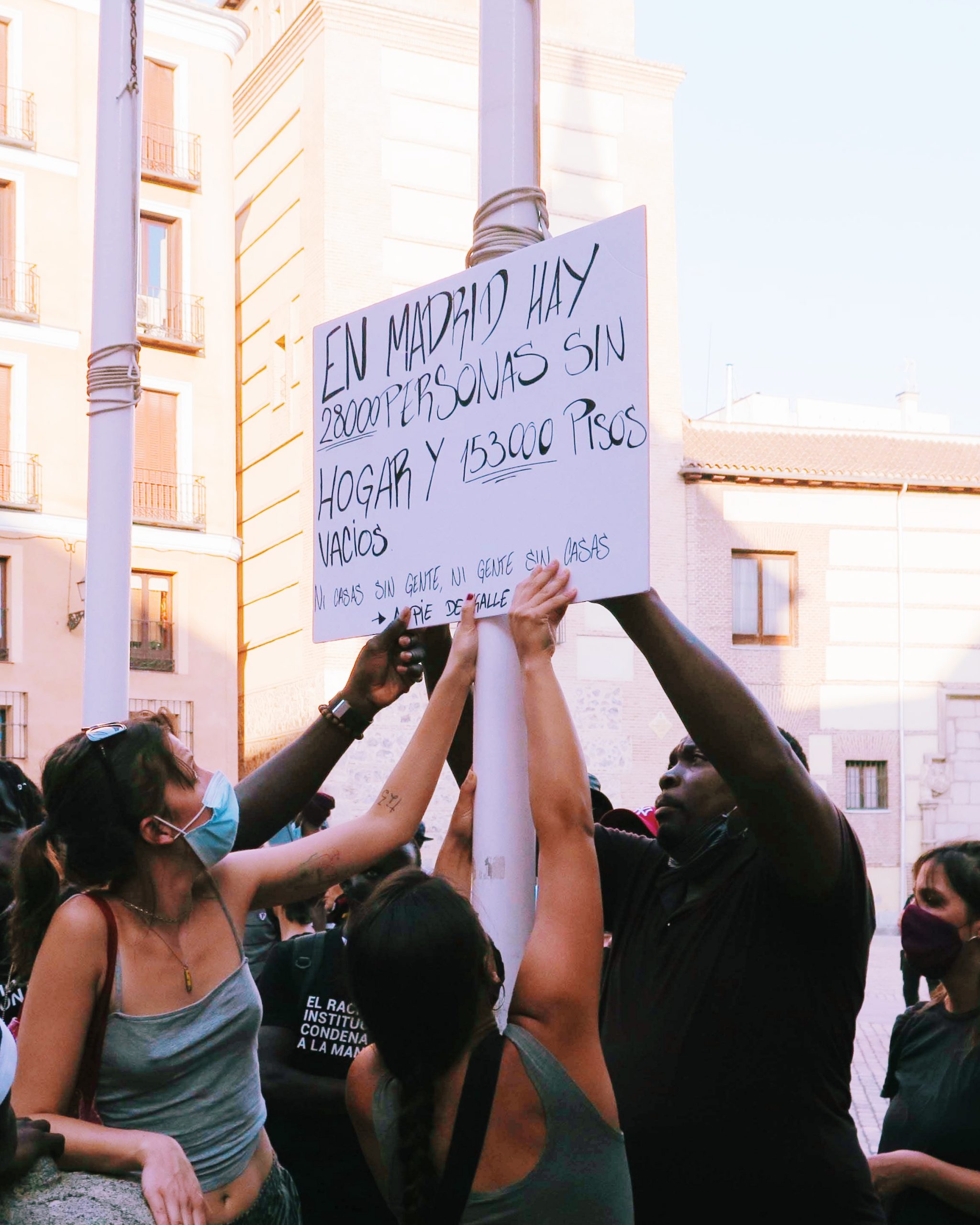 In Madrid, tourists and local foreigners are not to blame; the local City Council is, who chooses profit over people and who still stick by the narrative that tourists can “save” Spain – and it hasn’t stopped.

Have you heard about #VuelvealCentro (Come back to the Centre)? It’s Madrid City Council’s latest gimmick to “save” the city centre by doing €1 tours.

Victoria, 43, a social worker and long-term resident of Lavapiés says, “I hope that the economy doesn’t continue to be based on tourism, but rather in small industry, agriculture and livestock. We have the potential to do so. I’m sick of globalisation and tourism”.

For a decade, Spain has put tourists before its residents, and profit before its people. With a chance to learn from mistakes made during the last economic crisis and its double-edged-sword recovery, the country needs to take a close look at itself in the mirror and see that this is a country with fertile land, strong industry and a generation of young, ethical entrepreneurs.

While tourists slowly return to Spain, I hope that the nation treats them like locals – not saviours – because Spain has the power to be self-sufficient and independent. Whatever happens, it’s time for Spain to gain the confidence it needs to not rely on tourists to save us, but to take care of itself and its people.

Four four years, I’ve been driven to bring you real-life stories told by the very communities that don’t receive the coverage they deserve. Understand how racism, exploitation and poverty are pre-assigned fates chosen by those in power, and how communities experiencing this are overcoming it together.  You may have noticed that, unlike the vast majority of publications, MNF remains free of ads, sponsors and rich investors. Independence is everything and I will not be influenced by those in a position of privilege or power. Therefore I invite only my audience to support this project and only you to help me keep doing what I do.  Support MNF for as little as $1 per month, which you can cancel at any time.

We need to talk about Madrid’s ‘Tourist Saviour Complex’ was last modified: February 15th, 2021 by Madrid No Frills

This is a blog for the under-reported narrative, s