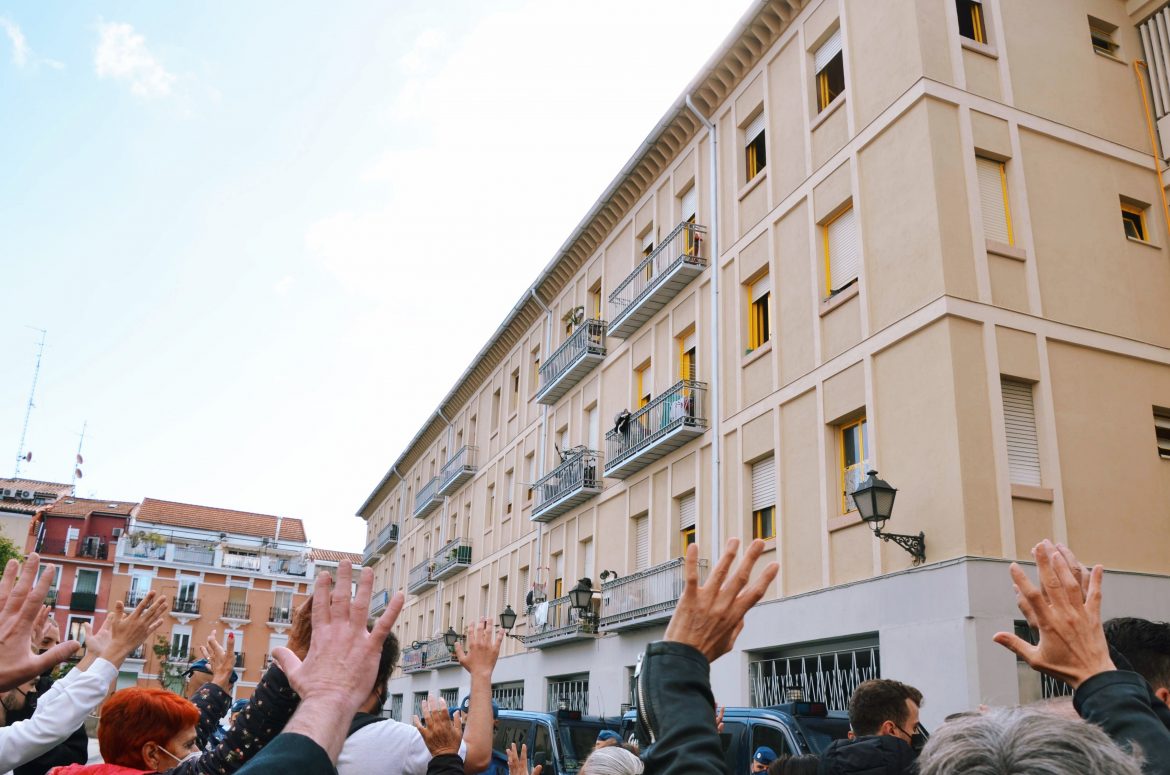 Let’s start with an example. In 2010, Elisabet heard about a flat in a social housing block in Lavapiés that had sat empty for five years. She broke in, changed the locks, and made it her family home. With three children, now aged 14, 15 and 23, she was recently handed an eviction notice by the council telling her to move out. She was also told that, despite being the mother of two minors and having no income, she was not entitled to social housing. “They’ve told us we have to leave. If I’m thrown out, I’ll be living on the street,” said Elisabet.

“My kids are in the flat in tears, surrounded by suitcases. I wanted them to go to school this morning so that they didn’t have to see the eviction, but they were sick with fear, I couldn’t send them.”

Protesters and anti-eviction warriors PAH chant “shame” and “no houses without people; no people without houses” from Plaza Nelson Mandela, the on square which Elisabet’s fourth-floor flat overlooks. There are around 100 of us, thirty police officers, four riot vans and one passing helicopter.

Asun, a well-known anti-eviction activist in the barrio and proud Gitana is wearing a t-shirt of herself saying ‘We have survived beyond our chances’. She is leading the chanting and keeping spirits high when, suddenly, the crowd goes silent beneath screams from Elisabet. With one leg over her balcony, she is threatening to jump from the fourth floor. Elisabet’s children managed to pull their mum back inside and paramedics entered the building.

It was an upsetting moment for everyone – people were crying and some even had to leave. A police officer, who remained stern and guarded, had tears in her eyes. No one can see someone on the edge of suicide and not be affected by that – even Madrid’s housing activists who’ve seen it many times before.

After three hours of protesting, the crowd had no choice but to move on: “We have another eviction in Carabanchel,” explained Asun, and the crowd marched down Calle Mesón de Paredes towards Metro Lavapiés.

The eviction Elisabet and her family went through today will stay with them for the rest of their lives. Evictions are state violence. Evictions are a human rights violation. They’re cruel and wrong and should be made illegal – no matter what the circumstance of the tenant.

How are evictions are a human rights violation?

Offence: being unable to pay a bill. Punishment by law: homelessness.

Who has committed the greater crime? The tenant or the law makers? My friend Pablo thinks it’s the tenant. Here’s how our conversation went…

Pablo: My mother owns a property that she rents out. Why should she lose money because her tenant doesn’t pay?

Me: You’re right. Why should she lose money? The council should pay.

Pablo: So, if the tenant refuses to pay, why should the council now pay?

Me: The tenant rarely refuses to pay. The reality is often that they can’t pay. In this case, would your mother feel comfortable evicting them and leaving them potentially homeless?

Pablo: No, she’s not a monster. But if she loses money, she will be homeless. So, what choice does she have?

Me: In the current system, she has no choice. The current city council will not help her tenant, and therefore will not help her. But, in the UK, for example, the tenant can apply for housing benefits which your mum would therefore receive. In the case of Elisabet (an unemployed single mother of two minors) she would be entitled to housing benefits.

Pablo: So, in that case, the tenant can stay, and my mother will also be paid?

Me: Yes, that’s right. Everyone wins.

Pablo: But the money is from the State. Why should we pay our taxes so people can live rent-free?

Pablo: It’s more complicated than that.

Me: Is it? No matter who you are or what your circumstances are, don’t you think you should be entitled to decent housing?

Pablo: Yes, everyone should be entitled to decent housing. But stopping evictions shouldn’t just end with the landlord/lady having to let someone live in their property for free.

Me: Then join PAH and help us change the law on housing rights so that we can achieve more social housing, more housing benefits and no more evictions.