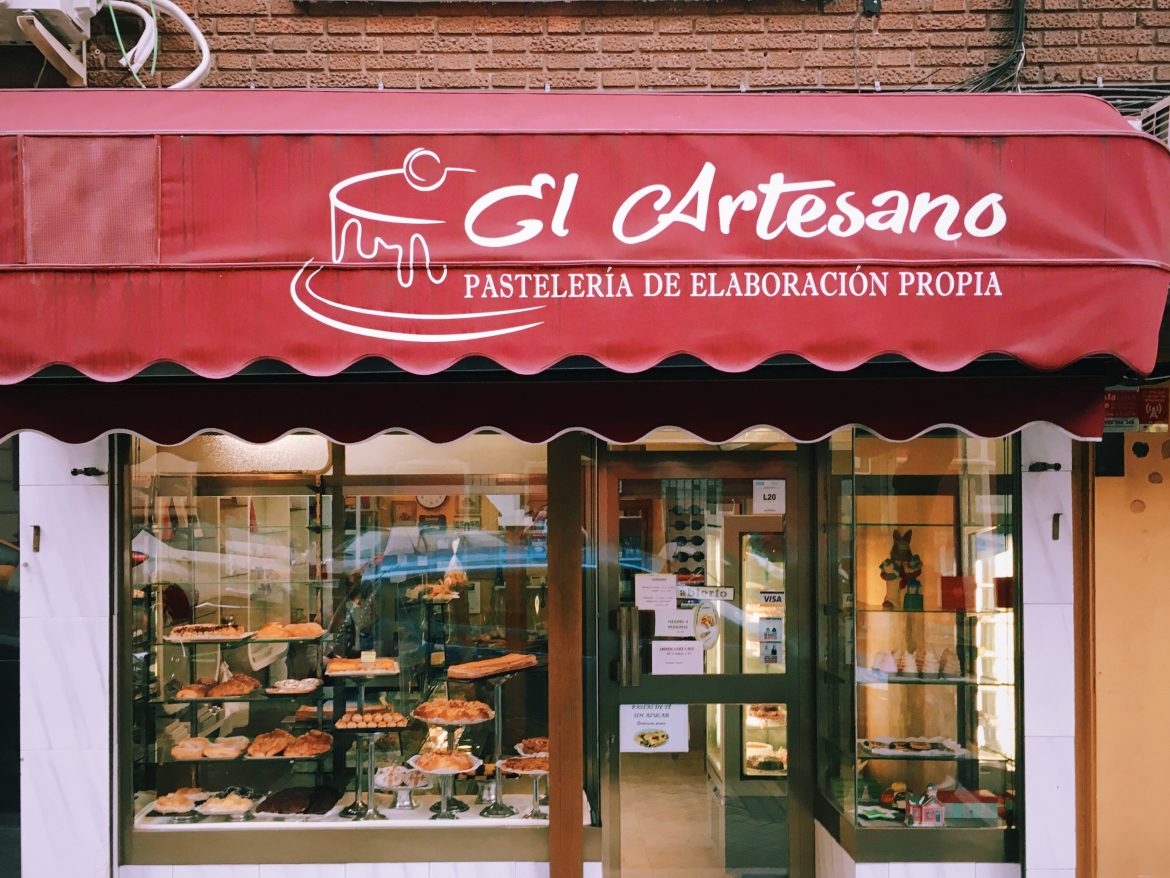 “The best pastelería in Madrid” is a bold claim, with the potential to spark messy cream fights. But a good argument can be made that El Artesano, a small pastry shop in Ventas serving the local community for over 50 years, is an honest contender.

Cabinets are stuffed with rows of round buñuelos containing tiny reservoirs of chocolate, crema, nata, cabello de angel, trufa, cafe or frambuesa, all ready to be bitten into and burst in your mouth.

The round buñuelos are also delicious, but tricky to eat. The moment you break through the load-bearing outer wall of chewy dough the entire ball structure collapses, releasing a slow-motion wave of thick custardy cream. The best tactic seems to be to make a “surprised emoji” face then stuff the whole buñuelo in your mouth in one gulp.

On top of the cabinets are piles of huesos de santos, cylinders of sugary marzipan with a hard sugar almond coating and a thick yolk filling. Their resemblance to bony fingers echoes the bones of saints, made specially for All Saints Day last week.

Everything is made here. Come, look!

…says Paloma, one of the owners of El Artesano. She leads me to the back of the store and down a tight staircase to the kitchen where two bakers are baking, including her husband Julian Azores Torres. They both took over the bakery five years ago, keeping its station as the neighbourhood bakery alive.

In Madrid, the artisan pastry sector is represented by an independent, non-profit association called ASEMPAS that aims to champion and defend artisan pastry as a symbol of prestige and quality. Even though Madrid’s 600-plus pastelerias have been hard hit by the Covid crisis, ASEMPAS have noted an uptick in recent sales of seasonal pastries. The demand is still there: madrileños still want to buy pastries to celebrate the city’s changing seasons.

The result was a double-layered crown filled with cream, similar to a roscón de reyes, the colourful crown dessert eaten across Spain at Christmas. The association stresses that the Corona de la Almudena is not a roscón but Madrid’s own unique offering invented to celebrate Our Lady of Almudena who, as well as being the patron saint of Madrid, also happens to be patron saint of the pastry guild.

Further online baking classes can be found here, and below is one I watched last week…

Compared to the roscón, the Corona de la Almudena is simpler, smaller and creamier, and not adorned with colourful crystallised fruit like the roscón. Instead, it’s lightly showered with sugar or scattered with almond flakes. It will be sold in pastelerías across Madrid but only between the 9th and 11th November!

Today, El Artesano have opened specially for us to buy and take away a neatly wrapped parcel of pasteles and a Corona de la Alumudena so that we can celebrate autumn’s sparkle with a traditional pastry, as madrileños have done for years. In spite of everything that’s happening around us, the rhythm of the year continues so let’s take a moment to enjoy it.

This article was written by Anna Wyndham, a British Australian researcher and writer living in Madrid. She balances enjoyment of the capital’s neighbourhood life with frequent escapes to hike through the Sierra, and has big plans to start a blog about Madrid’s overlooked corners. Watch this space!

In two days' time, on the evening of Juernes, the

⚠ Malasaña eviction tomorrow. A residential b

This is the smallest stall in the Rastro, and here

Guess who's preparing for the Rastro reopening TOM

Food bank @vecinasdelavapies were born out of the