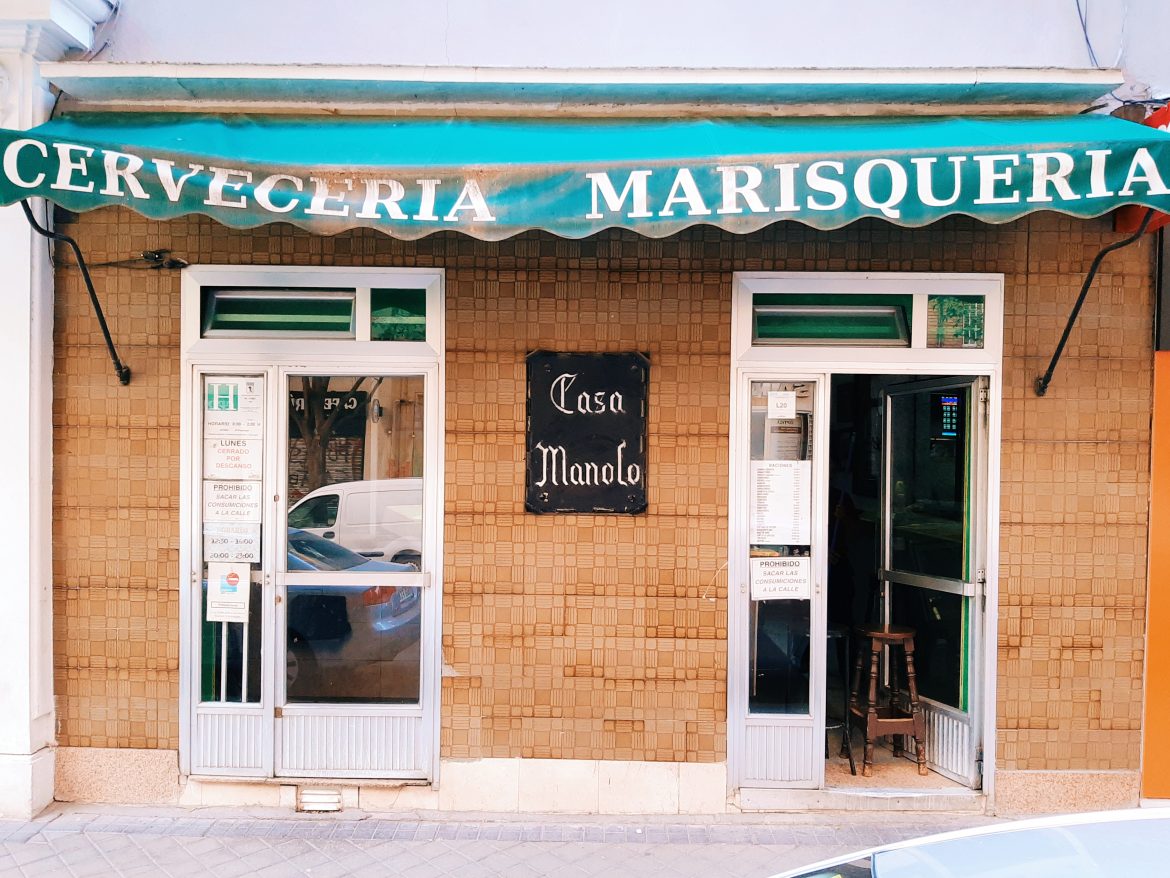 I’m proud to say that I grew up frequenting the neighbourhood bars of La Latina with my dad, and I have fond memories of their no-frills charm. But it took me many years living abroad in Denmark to appreciate the cultural richness of my barrio, and it came mixed with nostalgia and grief at the places that had closed.

Well, it wasn’t really the places itself, but the stories of the owners behind the bar. I clearly remember my dad talking about their different regional origins and calling the owners by their names. He grew up in Carabanchel, where many migrants from La Mancha settled in the 50s, so pointing out the stories of those fast-emerging bars became an exercise of self-recognition. Madrid’s identity was being built.

After years living in Denmark, where I trained as a baker, I’ve moved back to Madrid and I’m re-discovering my own city with new eyes – especially Chamberí, where I’m currently living with my sister. As close as 1 minute from our flat, I come across Casa Manolo.

The space is a classic no-frills bar with a huge bar spanning the length of the room and three standing tables outside. It has mirrors, some of them with old Mahou branding, which is a beautiful souvenir of history for clients to enjoy.

As in most of these personalised bars, the working set-up is on point. One plancha and a frier are perfectly managed in a one-man-show. Who could imagine pouring cañas, frying calamari and boiling goose-barnacles could look so chilled, all the while chatting to customers?

After being given a mixed plate of fried seafood a try, we thank the owner, who we thought would be named Manolo. To our surprise, he’s called Ángel. He’s a calm soul, speaks slowly, moves softly and is approachable.

In 1972, Manolo (the original owner of the bar) joined the hundreds of other ‘Manolos’ who opened bars under the iconic name. Years after being Manolo’s apprentice, Ángel took over the bar and has kept the menu exactly the same from the first day. Ángel is now 67 and plans to retire soon, but he’s not optimistic about the future of Casa Manolo. Closing for several months during lockdown was a financial struggle and, in addition to some health problems, it pushed him away from the front line.

Let’s see how the pandemic develops because, if it continues this way, I’m done.

…he states while pouring some sherry for an elderly couple. Ángel doesn’t rely on casual customers and proudly shares that most of his clients come from other areas just to pay him a visit.

They aren’t customers, they are friends. The day I will be gone, who will come?

Ángel, his bar, and the micro-culture that exists inside all feels at risk of extinction. He, along with many others, is an honourable member of the Spanish migration boom who came to Madrid shortly after Franco’s death looking for a better future. They found the up-and-coming service industry, a solution to a rapidly changing country, filled with uncertainty. But when I ask Ángel if he enjoys his work, he tells me…

No, I have never liked it but it happened to be this way, and here I am. Yesterday I woke up at 3 am to pick up the seafood from the central market, and I do it twice a week. Then I close the bar almost at midnight most days. You see, it’s noon and I haven’t had breakfast yet. I just want to retire.

I later leave the bar with the feeling of a heavy heart: one would imagine that those who are respected for what they do actually like their job.

As a Spanish emigrant returning home, I feel like I’m coming back to a decaying culture: a barrio rapidly turning into a theme-park with streets full of new bars offering great experiences but void of any unique identity. Today, for any kind of business, building up a reputation seems inevitably linked to a bar’s existence on social media with food and an atmosphere perfectly tailored to be ‘grammed’. I can’t relate.

My childhood memories tell me that no-frills bars are a part of the barrio’s culture, where you invest in an experience and getting to know the people behind the bar, rather than a produce. Frequenting no-frills bars was – and still is – a charming quest that culminates in a type of friendship, even if the bar owner is tired.

It isn’t really about the bar itself but the person who runs it: it’s Casto from El Palentino, Lola and Nemesio from San Lorenzo, José Ramón and Encarni from El Melos, and the many endless more to be mentioned. It’s about those bars that still link us to the migrant-led madrileño culture of the post-dictatorship boom years and remind us that it’s not about the Gatos, but about those who have moved to this city and defined the identity of Madrid.

Arturo Romera is Blogger of the Future graduate of the University of Madrid No Frills! He is also a baker based between Copenhagen and Madrid. After graduating from culinary school, he has worked in the food scene of France, UK and Denmark. He currently studies organic farming, researches craftsmanships and is an early-career journalist. You can follow Arturo over on Instagram here: @romera.figueroa.