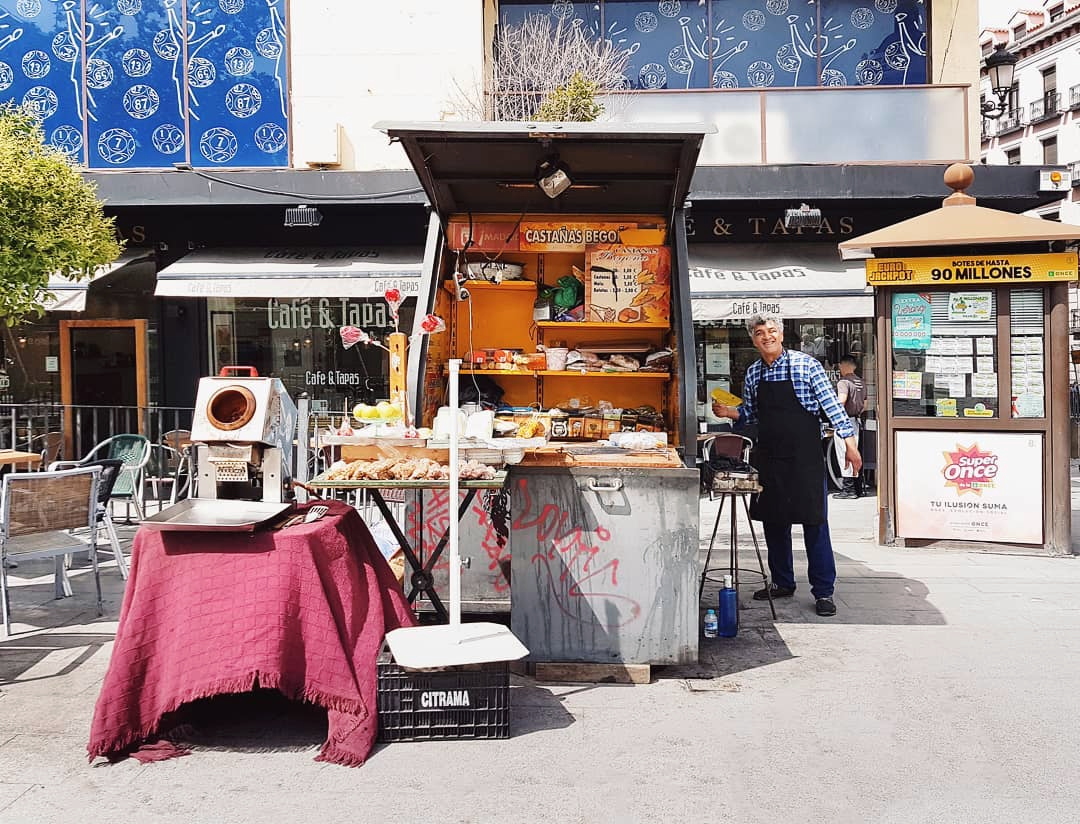 They’re one of the reasons why our trajectory between A and B looks like that of an indecisive swift, yet so many of us are still determined to dodge the little roadside shops. Commuter mode is something these veteran shopkeepers see a thousand times a day, but they do still hope you will see them. They’re perfectly placed should you spontaneously decide to get your shoes shined, grab a bag of chestnuts or pick up a newspaper, though these gifts of the street are rewarded only to those who slow down.

Allow yourself an extra five minutes to get to the nearest no-frills bar, and you’ll witness our streets come alive with a multi-generational community of micromerchants, just like these…

THE SHOE SHINER ON GRAN VÍA 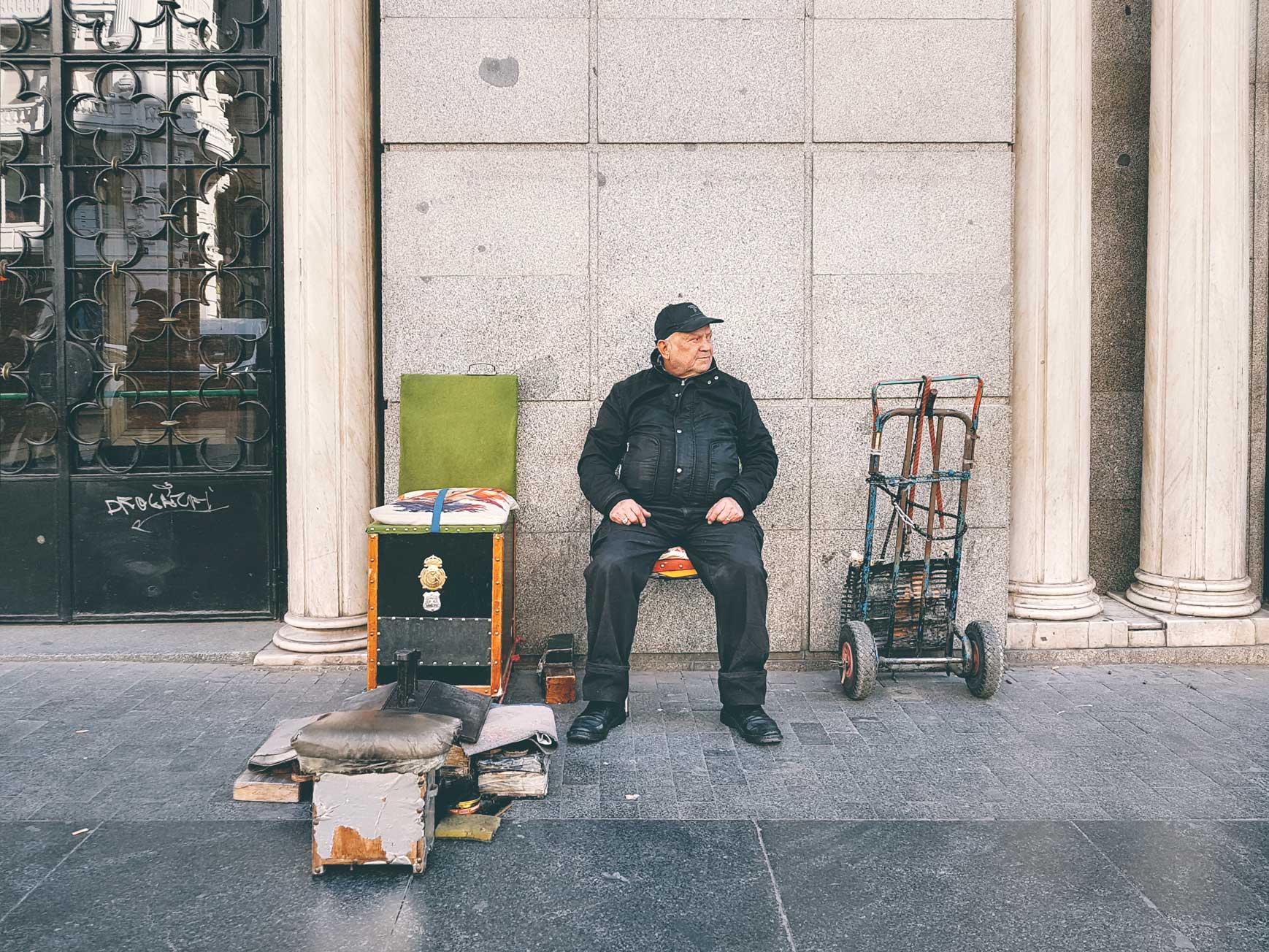 “I’ve been here shining shoes in this exact same spot for 39 years. We used to be an entire community of shoe shiners on Gran Vía, maybe 50 of us. Where I’m sat right now used to be a theatre. Look, I’ll show you the old ticket booth inside this entrance.

The theatre used to look after me, let me use their washrooms and give me coffee. The theatre is now an H&M and they don’t let me use their facilities anymore – I have to go to a cafe down the street and around the corner. I’m scared that someone will steal my box while I’m gone.” 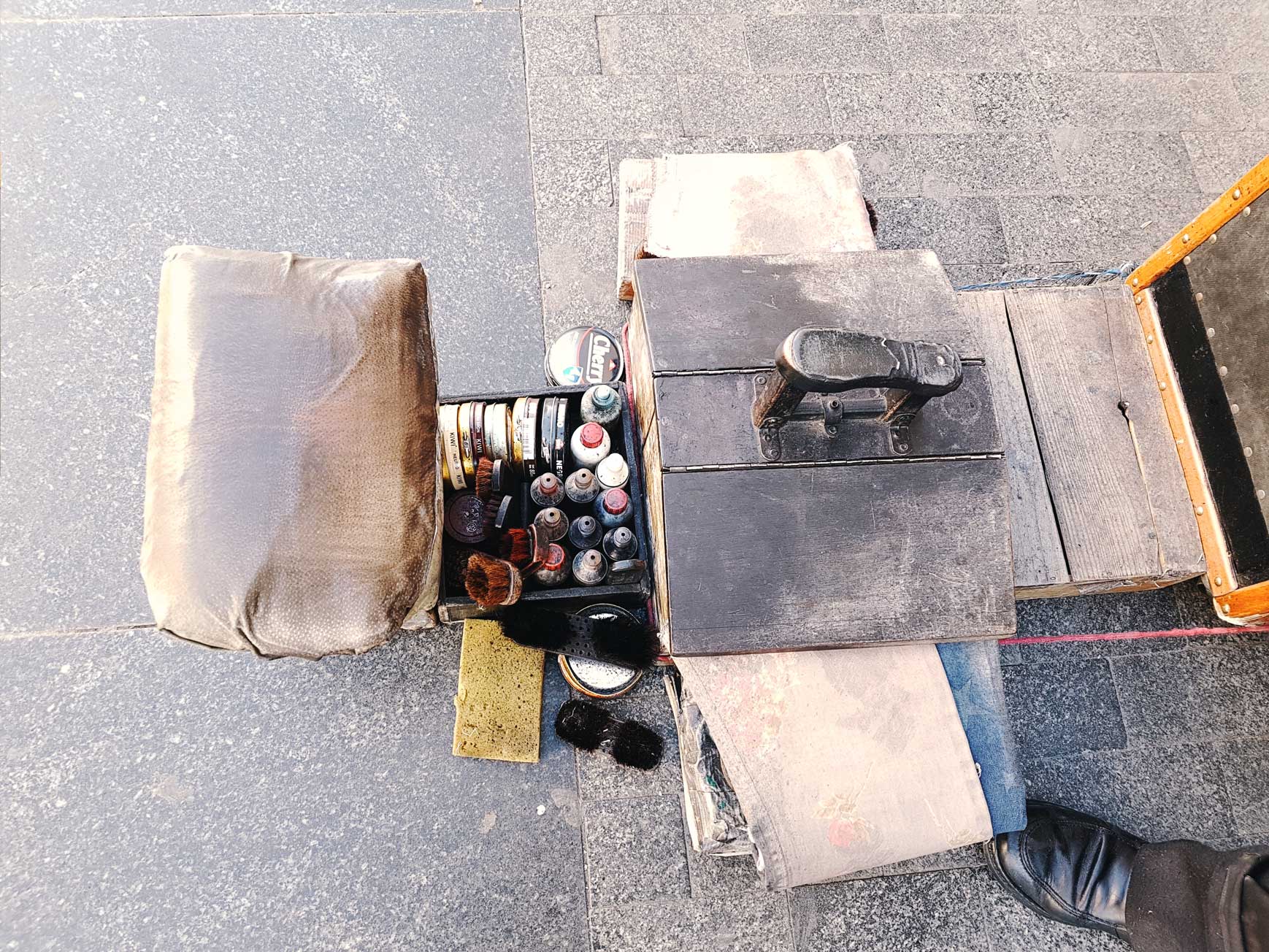 “I used to work a few hours in the morning and have maybe 50 customers. Then, I would have enough money for the day, so I’d finish by lunch time. Now, I have to work morning to night, and I get no more than five customers in one day.

There are only a few of us shoe shiners left. The guy over there – he’s Mexican – he’s been here for 15 years. Young people don’t buy leather shoes that much anymore and, even if they do, they have their own shoe shining equipment at home so they don’t come to me.” 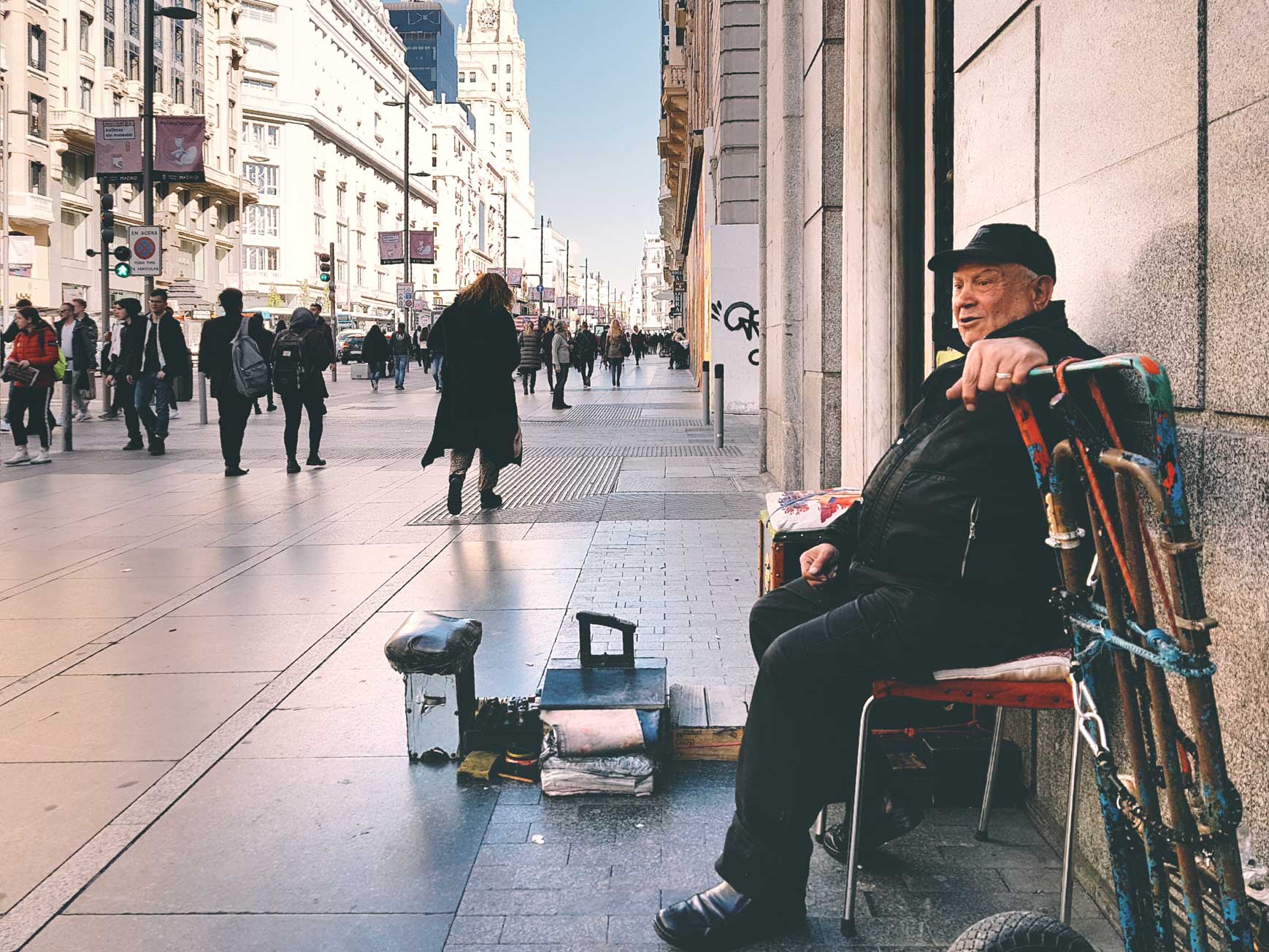 “See here, I make my own special shoe shining potions at home and bring them here. At the end of the day, I put everything inside my box, where the customers sit, and I take it to a storage unit nearby. Then, I take the metro home to Usera.” 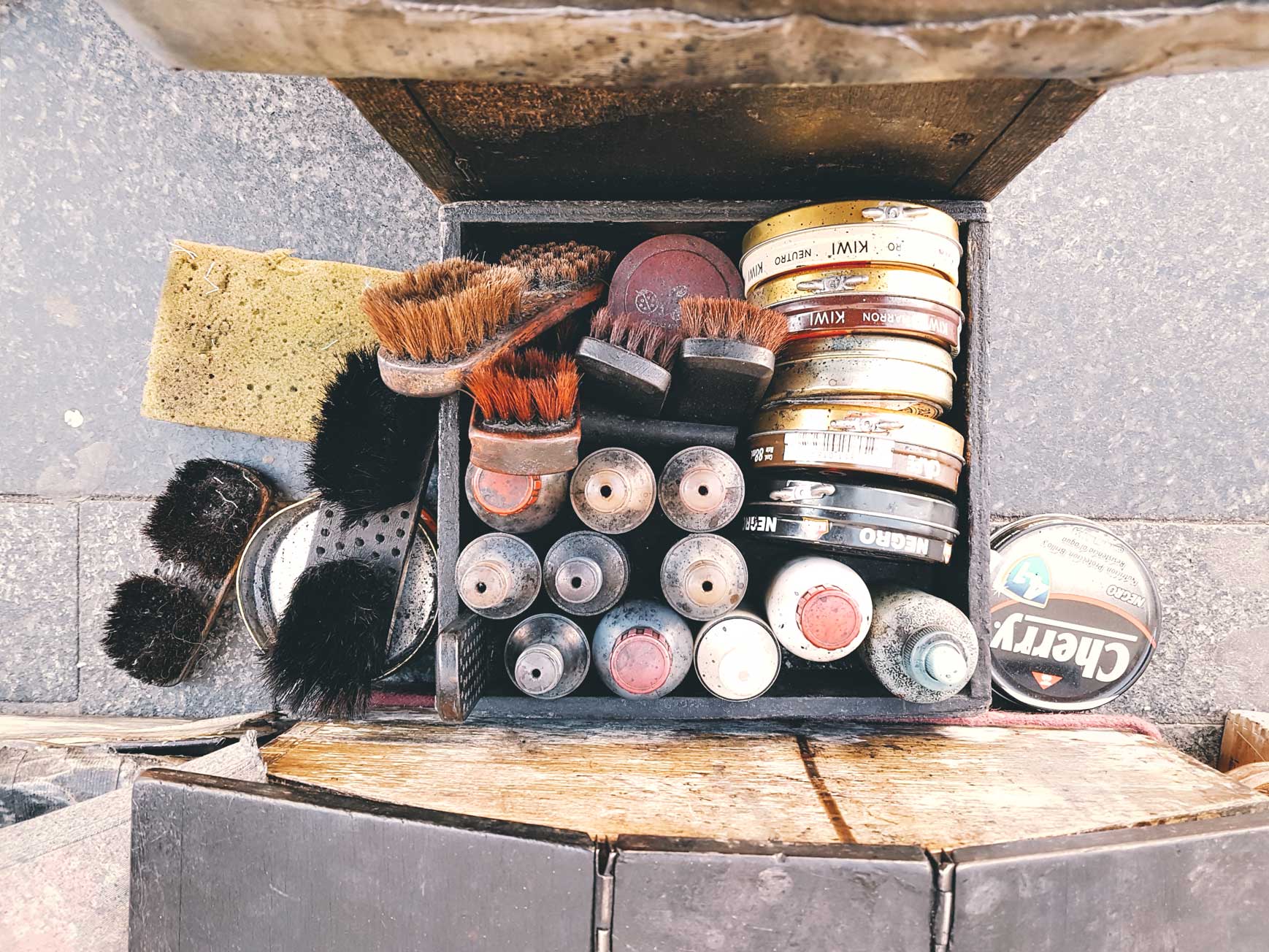 Get your shoes shined for a few euros by Fernando outside H&M on Gran Vía, 37. 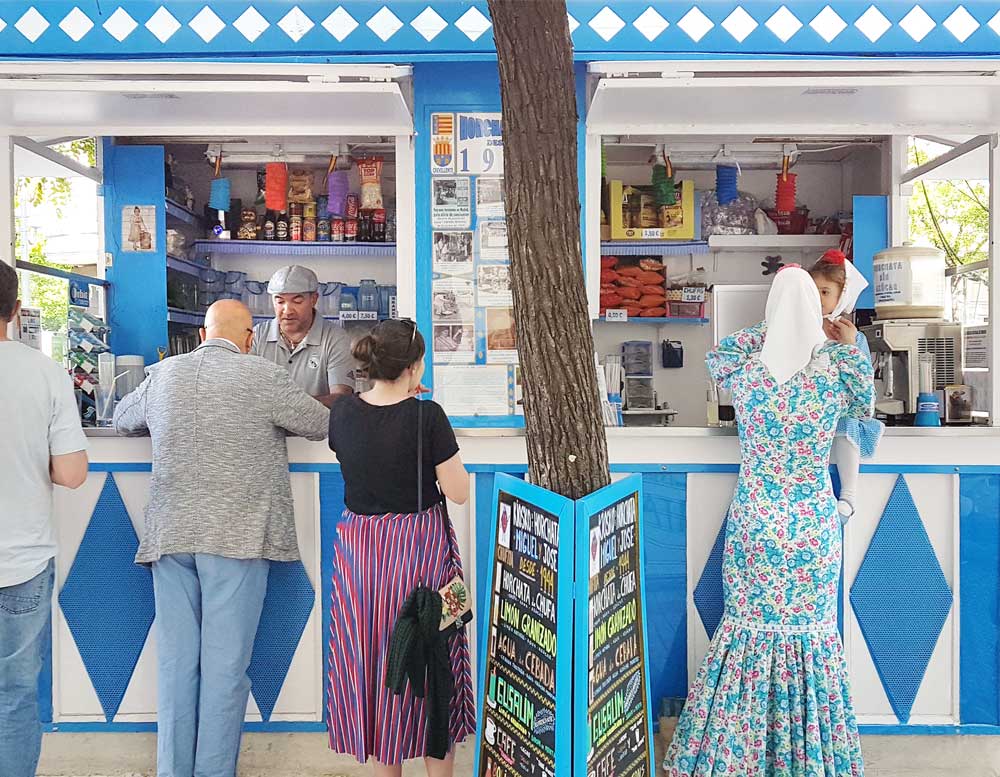 Find the best horchata in Spain right next to Retiro park in a little roadside kiosk run by the fourth generation of the same family, just as it has been for 75 years. Cousins Miguel and José own the last of Madrid’s horchata kiosks, which once numbered around 300, and proudly prepare their horchata according a family recipe dating back to the early 20th century. 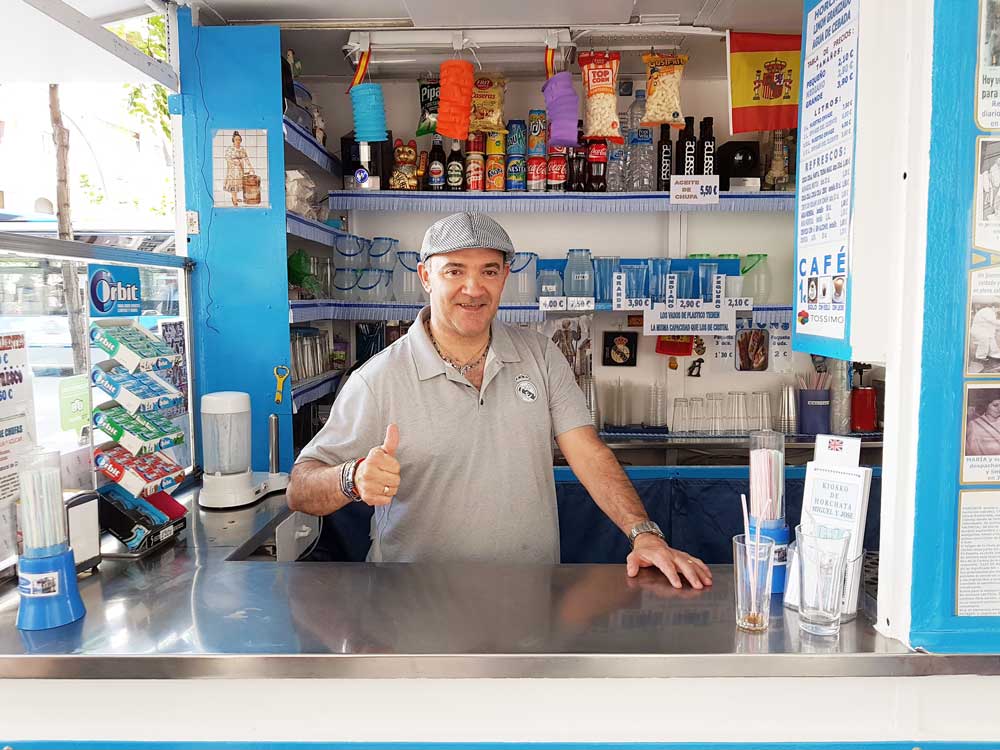 “I have a daughter who’s 21. She loves the kiosk, but I don’t think she’ll take over from me. In the past, it was a given that the children would carry on the family business, but now a butcher’s son is becoming a doctor and a fishmonger’s daughter is becoming a lawyer! So no, Miguel and I are probably where it will end.” 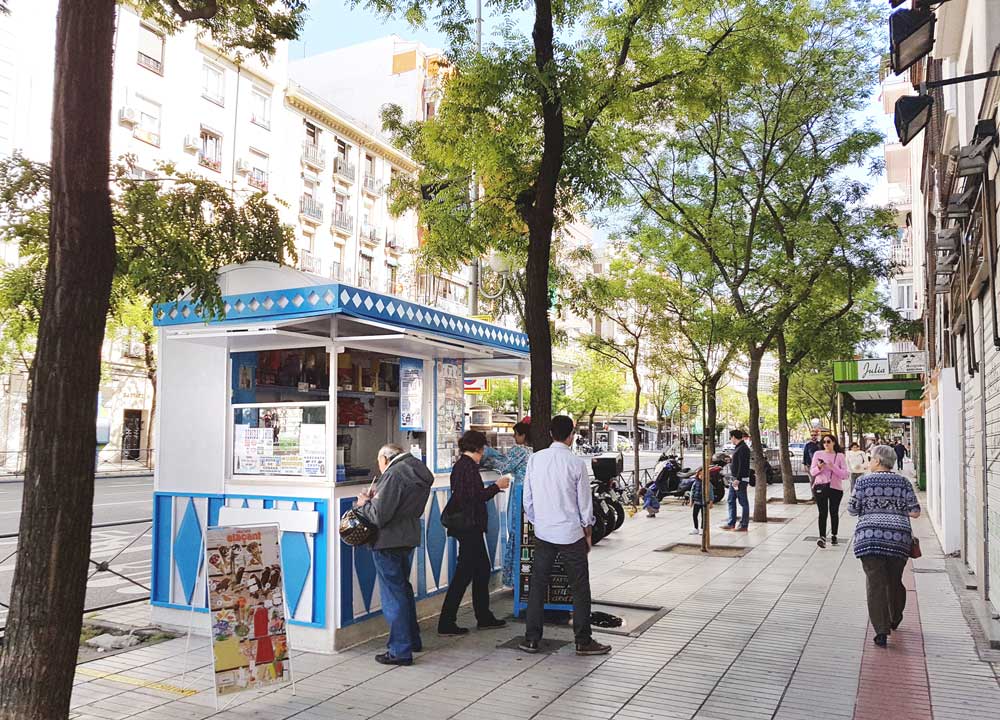 Get your fresh horchata from Miguel and José by the roadside on Calle de Narváez, 8.

“We’ve been here on Plaza de Jacinto Benavente for 37 years. We started out in front of the churrería, but they made a complaint about the smoke to the town hall, so we moved to near the entrance of the car park. We’ve since moved four more times and have been in this spot for the past 13 years. Madrileños love our chestnuts, and the corn and peanuts are popular amongst Latinos – particularly Ecuadorians.

I’m from Morocco by the way, and Begoña is from Madrid – that’s her name there on the sign. We take it in turns to work shifts here. If there’s anything you need, just come by. We’re always here!”

“I’m the 4th generation of my family to run this kiosk. I’m open from 6 am to 6 pm every day of the week. Sometimes it gets very cold, but I’m always here.” 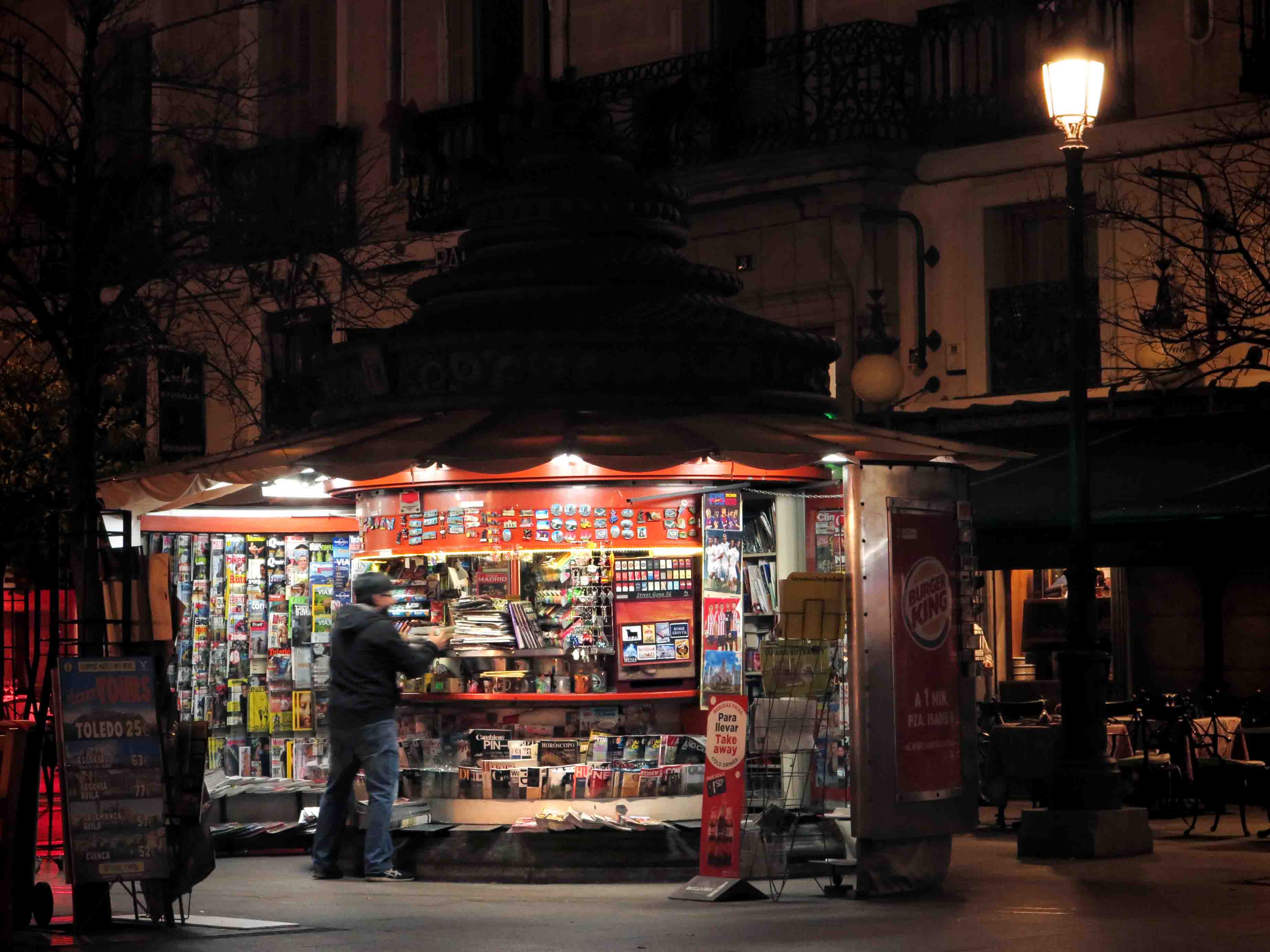 “Business is nothing like how it was when my mother was running the kiosk. My customers are elderly, and they’re dying. When one of my customers dies, they’re not replaced by another younger customer. I value them, and they value me too. I play an important role in their lives. You know those people that go and visit old people every day in their homes? I’m like that, but the old people come to me, buy a paper, we chat a little and then they go to the bakery. They know the bakers too, and the bars. We’re a community.” 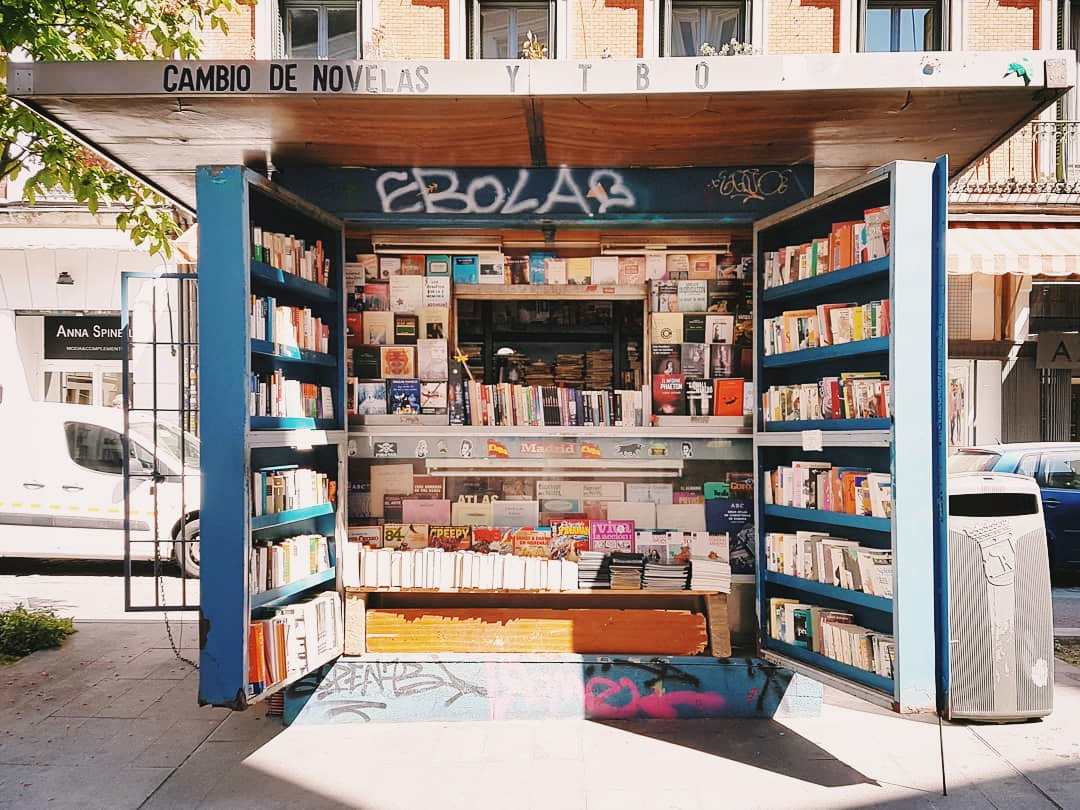 “We’ve been here since 1965. I’m the grandson of the founder. It was my grandmother’s, and then my father’s, and now I work here. We used to be over there [he points to a dozen meters away] but we moved here a few years ago.”

Lavapiés 🧅🚪 Seeing this reminded me of goi

📸 Let me take you back to the Cañada Real, to