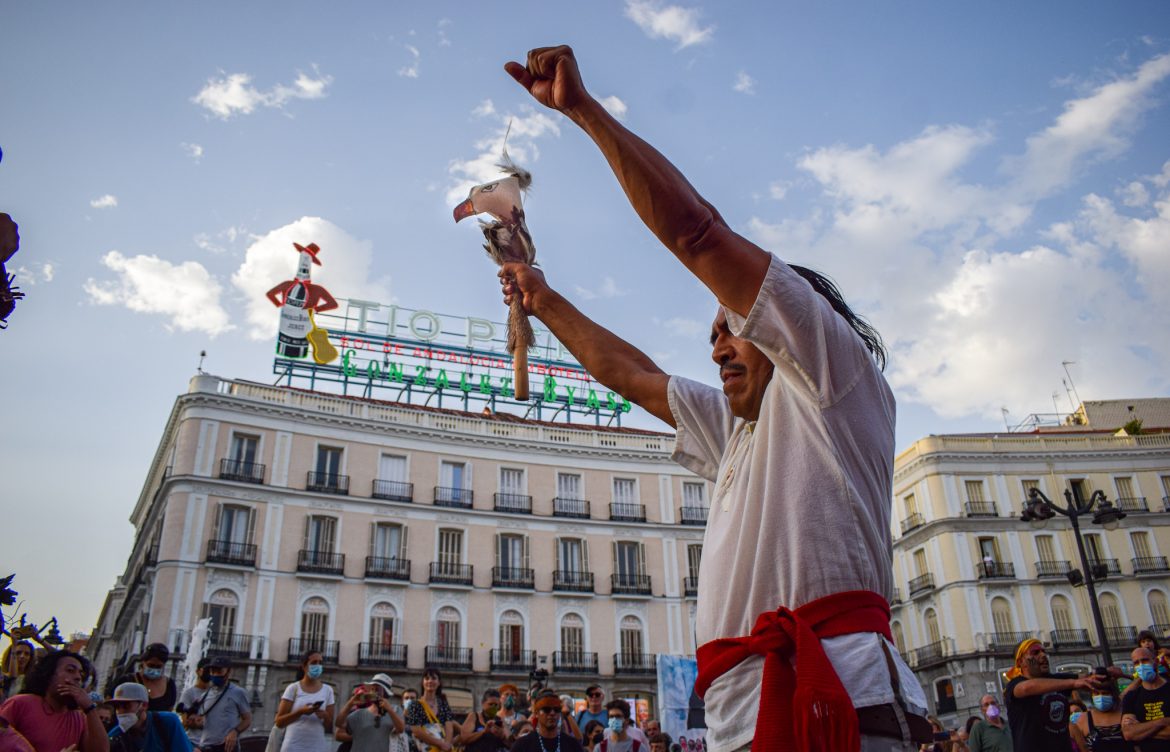 Just after sunset on 13 August 2021, with temperatures still topping 35C, the seven delegates of the Zapatista National Liberation Army (EZLN) stepped onto the monument in Madrid’s Plaza de Colón. They had just completed a historic journey from the jungles of Chiapas in Mexico to the Spanish capital to mark 500 years since the Spanish conquest of the Aztec capital Technoctitlán, now Mexico City. A local crowd, who marched behind the delegates, marked their arrival with thunderous applause.

While the symbolic reference to Spain’s colonial past was clear, the message of the Zapatistas focused clearly on the here and now and, crucially, on the fact that they had come to Europe not just to speak about past wrongdoings, but to emphasise the ideas of unity between progressive peoples across the world.

A brief history of the Zapatistas

Zapatismo and the Zapatistas take their name from the agrarian leader Emiliano Zapata, who, during the Mexican Revolution (1911-1917), played a key role in mobilising popular support to demand land rights for indigenous communities. Although Zapata was killed in an ambush organised by the government in 1920, his contribution during the Revolution has given him a legendary status in Mexican culture, with politicians and groups of various ideologies seeking to associate themselves with him.

Although Zapata originated from the central state of Morelos, his fight for land rights and self-governance for indigenous communities has had great relevance across the nation. This is particularly true in the ethnically Mayan southern-border region of Chiapas where, on 1 January 1994, a group called the EZLN sparked international headlines when they launched a military takeover. This move was triggered by Mexico’s signing of the neoliberal NAFTA free trade agreement.

The EZLN, having now taken control of the capital and major towns in the region, grasped the opportunity to explain their motivations to an international audience, citing the poverty and inequality that the population of Chiapas faced, and promoted an ideology focused on ecologism, grassroots democracy and anti-globalisation.

Although the Mexican military quickly turned back the EZLN’s gains, the group won many hearts and minds nationally and internationally, forcing the government to accept the legitimacy of many of their demands and to negotiate a solution. In 2005, the group officially laid down its arms and became a movimiento social.

Today, the EZLN continue to play a significant role in the rural communities of Chiapas and, more broadly, as a progressive force in Mexican politics, campaigning against megaproyectos that damage the environment, and raising awareness of how the policies of the Mexican state damages indigenous communities.

Activism inspiration around the world

The message of the EZLN has been a source of inspiration to progressive activists across the globe. The announcement in September 2020 that a delegation would come to visit Europe generated great excitement here in Madrid.

After their 1000km journey to the Atlantic coast from Chiapas, the seven delegates (four women, two men, and one non-binary person) set off on a six-week boat trip across the Atlantic Ocean, replicating the journey taken 503 years earlier by the Spaniards coming to Mexico.

Although rich in symbolism, the trip to Europe was much more than a PR exercise. The ‘Gira Zapatista’ (Zapatista Tour) included meetings with representatives from more than 20 nations and various visits to cities throughout Spain and other parts of Europe. Their first official meeting was with the Kurdish female forces who have fought against the terror of ISIS, with the Kurdish representatives speaking of how they had long looked up to the Zapatistas actions.

The tour also included an appearance at a political festival in Bretagne, France, where the delegation met with activists and participated in discussions about ecologism, feminism and anti-globalisation. The Gira Zapatista’s tour emphasises the value of an internationalist perspective that promotes the unity of oppressed people from vastly different contexts, whether that  be class, gender, race or language.

In Madrid, on August 13 this year, the Zapatistas marched through the streets to follow the EZLN float down Calle de Alcala chanting “Zapata vive, la lucha sigue!/Zapata lives, the struggle continues”. One of the first Black members of Madrid’s Parliament, Podemos’ Serigne Mbaye, joined them, waving a Mapuche flag which represents the indigenous community of Chile. In a recent speech, Serigne said,

To celebrate colonialism is an act of racism.

This march through Madrid, which felt more like a celebration than a protest, was promoted by the organisers of the Gira under the title ‘No nos conquistaron’ (we were never conquered). This title is a direct reference to comments made by the Mexican President, the populist Andres Manuel Lopez Obrador (AMLO) who, in 2019, wrote letters to the Spanish state and to the Catholic Church demanding that they make an official apology to the “pueblos originarios” of Mexico for the abuses committed during the Conquest 500 years ago.

The EZLN have repeatedly criticised AMLO’s attempt to make political gains from the issue, in particular for fueling both the idea that the indigenous populations were defeated and assimilated by colonialism, and for implying a victim narrative for these people. In response, the EZLN stated that “that they have not conquered us [and] that we are still resisting and in fact in open rebellion.”

The determination of the EZLN and many Indigenous peoples not to simply become the victims of their situation, but instead continue to resist, is inspiring to activists here in Madrid. Although the contexts may be vastly different, there is undoubtedly a clear parallel to be drawn between the social struggle waged by the EZLN and that of activists in the Spanish capital.

Fighting for our public services, Zapatista-style

During an event in early July which first welcomed the Zapatistas to Madrid, Mónica Gortayre, from the Comisión de Migración y Antirracismo of the feminist movement 8M made reference to the parallels between the fight by the two groups. Gortayre stated that Madrid welcomed the Zapatistas “in a period of lucha (struggle)”, explaining that activists in the city were “defending our local clinics, our public health system and a public education which is free and of good quality”. This lucha will require not just complaints of the suffering the barrios are going through, but also a message of hope and solidarity, as well as a vision for a better future ­– hallmarks of the EZLN’s action.

While there may be much that separates the jungles of Chiapas and the urban landscapes of Madrid’s barrios, the EZLN’s message of rebellion and dignity serves as an inspiration for activists in the Spanish capital. As Madrid moves into a period in which public services are being increasingly cut to the bone, the lesson of the EZLN and other progressive groups worldwide encourages local activists to focus on solidarity and hope.

The Zapatista movement will return to the streets of Madrid again tomorrow on the anniversary of Christopher Colombus’ arrival to the Americas, where is it claimed that he ‘discovered’ the lands and ‘enlightened’ and ‘civilised’ it’s people, bringing them Spanish and Catholicism. But for the last 529 years, a complex system of exploitation of land, raw materials and people has existed, but it’s a story that remains largely unwritten. Books must accurately reflect historical facts regarding past tragedies and atrocities, in particular slavery, human trafficking and colonialism.

Madrid’s Descolonicémonos 12 Octubre group have organised a series of events which begin tonight at 18:30 on Plaza de Colón, and continue tomorrow from 17:00 on Sol and conclude on Plaza Nelson Mandela at 19:00 with concerts and performances.

All info of the events can be found here.

This article and photos are by Freddie Scott, a freelance journalist and photographer from England but now very happily living in Madrid. Over the last year, Freddie has been following social and political movements in the barrios of the South of Madrid and publishing pictures and stories to his social media account @the_other_madrid.