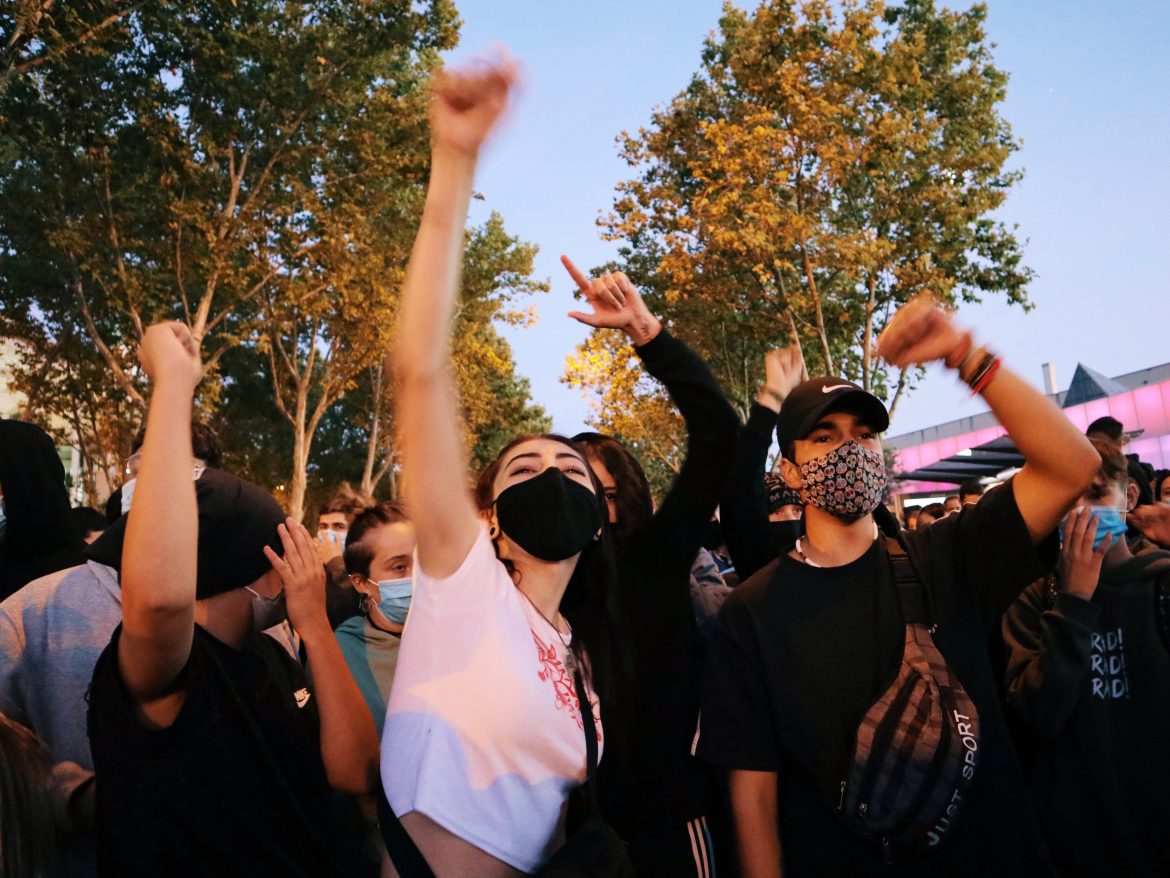 The chant which translates “Long live the working class!” echoed through the streets of Vallecas this weekend as neighbours hung out of their windows banging pots and clapping, making as much noise as possible from the confinement of their homes. This anthem of resistance is the united response of the people of Vallecas against the President of the Comunidad de Madrid, Isabel Diáz Ayuso, who has imposed new restrictions to lock down Madrid’s poorest neighbourhoods and install border patrol.

Vallecas is familiar with rising up and fighting back. This neighbourhood survived the most brutal attacks during the Spanish Civil War of 1936-39, then spent decades fighting for amenities as basic as running water and paved streets. Once again, Vallecas reignites its iconic revolutionary spirit, represented by the ‘k’ in Vallekas, to fight against an unsurprising spinoff of the coronavirus pandemic: discrimination.

This summer, I moved to Vallekas. I feel at home just like many who live here, but lately, things have felt quite surreal. I carry my salvoconducto (safe passage letter) every day when I go to work just in case I get stopped and asked why I’m travelling outside of my neighbourhood. I can go to work, but then I must come directly back to my neighbourhood and not stop off on the way – not even to pick up bread.

Last week, the Madrid regional government announced a selective lockdown for 37 health zones which includes Vallekas and, this week, they’ve added a further eight. People can travel in and out of their restricted neighbourhoods for essential activities including school, work or caring for dependents. Bars must now close at 10 pm and social gatherings are restricted to six people. Parks and play areas are also closed to the public.

In contrast, in non-restricted areas, people are free to travel to different neighbourhoods and continue their regular activities. The selective confinement has left many people feeling disappointed and confused. “In the end, it’s a little absurd […] every day, people in the neighbourhood have to leave their neighbourhoods and take public transport to go to do their work in other neighbourhoods that are not confined,” explains Miguel, a local to Vallekas.

A member of staff at a fruit shop on my street wonders if the restrictions have reduced footfall to her store. “I’ve noticed a decrease in sales and there are less people entering the store since the new rules were put into place.”

Residents of Vallekas gathered in front of several health centres, including the Centro de Salud Peña Prieta. As I waited for the protest to begin, I saw a little boy stare at the closed park, which had tape around the area with the phrase, “Prohibited to pass” written on it. He stood next to his father and I couldn’t help but wonder, why are the betting shops open but the public parks closed? As the protest began, I was overcome with solidarity and pride as we clapped and chanted, “Public health care! Public health care!”

Ramon, 41, a third-generation Vallekano and member of local support group Somos Tribu, which was set up in March during lockdown, said, “We find it particularly unfair that this affects lower-income neighbourhoods – it is double segregation, double discrimination. Not only are we discriminated against for our low incomes, but also now the authorities are discriminating even more by taking selective action.”

Many Vallekas residents believe the negative representation of working-class neighbourhoods and the selective lockdown has led to humiliation, further discrimination and some people are even getting laid off from their jobs. Ramon explains, “Now discrimination, I tell you, is twofold. Not only do they point to Vallekas as what we were before, which is a neighbourhood with many vulnerabilities and low incomes, but also now, they point us out for contagion rather than reinforcing the public health system.”

Maria, a neighbour of mine, feels abandoned and left behind. “[This is] one more symbol of the abandonment that this neighbourhood has, and many other working-class and poor neighbourhoods, above all in the South. In the end, they leave us here, segregate us from the rest of Madrid, do not give us the means to protect ourselves then isolate us and leave us here without any interest for the people who live here – neither for our safety nor for our health.”

Javier is 60 and has lived in Vallekas his whole life. Like Ramón, Javier is a member of Somos Tribu and is wearing a black shirt displaying the organisation’s logo. “Somos Tribu started as a WhatsApp group because there were people who wanted to help people who couldn’t go out [during the lockdown]. People started pulling together money for the people, for food and for diapers too.” During the lockdown, neighbours would help high-risk neighbours by buying their groceries and bread. Somos Tribu has now grown into a network of neighbourhood groups and food banks that span five areas within Vallekas (San Diego, Palomeras, Nueva Numancia/Portazgo, Doña Carlota and Entrevías/El Pozo).

Violent clashes with the police

That same evening, a 300-strong protest outside the Asamblea de Madrid in Vallekas turned violent as police charged protestors in what appeared to be a provoked but coordinated manoeuvre and a use of force far beyond what was necessary. Four people, two of whom are minors, were arrested and some were photographed with bloody heads – a common signature of a police baton blow to the head. Photographs and video footage capture the clashes unfolding in detail.

In response to the police violence the night before, around 2000 people peacefully gathered in front of the Asamblea de Madrid in Vallekas. Later on, as the protestors meandered through the neighbourhood en mass, passing by our fruit shops, multicultural restaurants, no-frills bars, barbershops and Chinese bazaars, families were clapping from their balconies cheering the protestors on, shouting “¡Viva la clase obrera!”

Whenever people ask me where I live, I happily say “Vallekas”, yet, I often receive mixed reactions including concern and shock. It’s important to break down the stigma and stereotypes attached to working-class neighbourhoods, because these negative portrayals perpetuate systemic racism. “Vallekas is a very emblematic neighbourhood and very pointed out by the mass media; they always talk about crime, but they don’t talk about the strength of the neighbourhood movement, they don’t talk about the vitality, the cultural richness that this neighbourhood has. And I think it’s also important to know,” says Ramon.

Ana, a resident of Vallekas, adds, “For the good, for the bad, Vallekas has been a neighbourhood that has always moved a lot. Indeed, it has been more out of necessity than on its own initiative but well, at least it is mobilised too, all the culture it has […] all the multiculturalism that there is, and inter-culturalism too.”

When the clock struck 12:00, neighbours resumed banging pots and clapping from their windows and balconies in support of public health care and the unity of our neighbourhood. Right by the Puente de Vallekas metro exit, under the roaring M30 which has now become an official hard border between Madrid’s rich and poor, Vallekanos gathered with signs displaying their various demands: no more cuts, better public transport, investment in health care, contact tracing and homes for the elderly, as well as a general outcry again repression and the selective confinement of working-class neighbourhoods.

The underpass beneath the M30 is also a bus interchange, with buses displaying destination: Puente de Vallekas. The bus drivers joined us from behind the wheel, beeping their horns and smiling and waving as we shouted, “¡Vallekas se resiste!” And I have no doubt that we will keep resisting, just as this neighbourhood has done for almost 100 years.

This article was written by Alexis Lahorra, a 26-year-old Filipina-Canadian from Montreal, Canada, born in Saudi Arabia and now living in Vallekas. Alexis is a mental health advocate, EFL teacher and educator and speaker. Watch her TedxTalk, follow her on Instagram and visit her website here.