La Guindalera’s traditional high streets and beautiful no-frills bars set it apart from its upmarket neighbour of Salamanca. La Guindalera’s working-class roots and narrow winding streets communicate a more humble undertone than the luxury-shop lined streets across the thunderous 10-lane Calle Francisco Silvela. In the 19th century, this neighbourhood was studded with cherry orchards and called La Huerta de Don Guindo (The Garden of Mr Cherry Tree), from which the area takes its modern name.

The micro-district of La Guindalera is located within Avenida de America, Calle Alcala, Calle Francisco Silvela and the M-30, and is characterised by streets filled with a diverse mix of architectural styles. Blocks of modern flats are broken up by centenarian casa bajas (traditional Spanish bungalows), and a curious collection of mountain-style houses can be found here too.

One of my favourite areas of the barrio is Colonia Madrid Moderno right next to Las Ventas bullring. A few rows of charming two-storey houses with distinctive steel pillars supporting windowed turrets can be found on Calle Roma and Calle Castelar. Some still have gardens packed with flowers and other houses don pretty tiles. Around a hundred of these houses were built back in 1890 but, sadly, the majority have been replaced with more modern buildings.

During lockdown, La Guindarlera’s strong community spirit came to the fore. I watched queues form outside the local fruit and veg shop, Quintin, whose owners Javier, Luis and Carmen went above and beyond to keep locals stocked up with essentials while never failing to share a friendly word and smile with everyone.

Neighbours yelled across the streets to each other during the lockdown, checking in on elderly residents as a voice of comfort and reassurance. The daily 8pm aplauso sanitario led to a nightly balcony DJ act to liven up my street and bring a much-needed smile to our faces.

Being so proud of my neighbourhood during this time inspired me to create Guindalera Voices, to be able to keep sharing my neighbours’ stories and stay connected with them.

Farmacia Guindalera became a therapy service to neighbours during the lockdown which still continues, while also making sure housebound clients always had their medicines and supplies.

It is such an endearing barrio! Ever since I started working here in, I’ve felt like part of a big family.

The desire to help out the neighbours seems to be a strong trait. Kumar, the owner of Indian restaurant Sagar, put a sign up during lockdown offering free food to those who suddenly couldn’t afford to buy it, saying,

The most important thing is that nobody goes hungry.

Local art school owner Beatriz is hoping to set up a SMS donation scheme of €1 to local food banks in exchange for beautifully painted bookmarks by her students.

When I was a boy, we’d have flamenco singers up here at the bar, improvising songs until 5am, it was another world!

… Sergio tells me from the cute corner bar at Casa Sierra, decorated with bull-fighting photos and memorabilia.

Growing up in La Guindalera, Sergio remembers the bar being surrounded by fields, often kicking a football around the adjoining streets with his friends. He took it over with great hopes to reach its 100th year of business, which dates back to 1925. But he fears that, like lots of other businesses, his days are numbered.

While the pandemic is damaging business for bars across Spain, Sergio has also noticed a change in young people’s habits, believing that they tend to order from delivery companies rather than eat out. He has recently applied for a terrace license in the hope of encouraging more custom and having outside space would certainly make it even more of a perfect stop for a tapa or two.

Sergio’s son Raúl, who also works in Casa Sierra, is named after former Real Madrid star Raúl González Blanco. The footballer himself has frequented the bar and his framed photo, alongside his young namesake, adorns one of the walls. Let’s hope all of this history isn’t lost and Casa Sierra manages to celebrate its 100th anniversary in the near future.

Casa Laura, owned by José, a born-and-bred ‘Guindalero‘, is a tiny no-frills bar that opened in 2018. “Things are complicated at the moment,” says José, but is determined to remain positive…

La Guindalera is like a pueblo, everyone knows each other and there’s a great deal of trust amongst people – it’s a great barrio.

This article was written by Suzanne McCullagh, who, having immersed herself in Spanish culture and gossip at ¡Hola! Magazine for 17 years, is now enjoying life as a freelance writer. She created Guindalera Voices during lockdown and loves nothing more than chatting to her neighbours and sharing their heart-warming stories. You can find her on Instagram here. 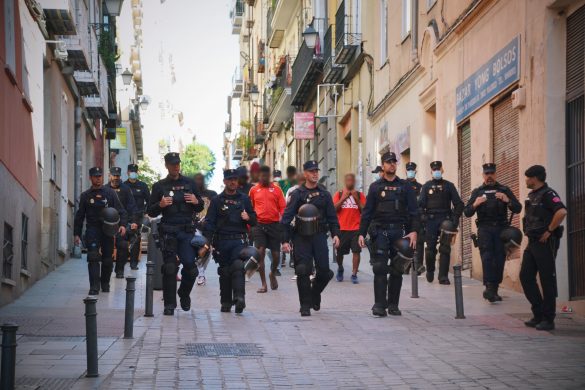