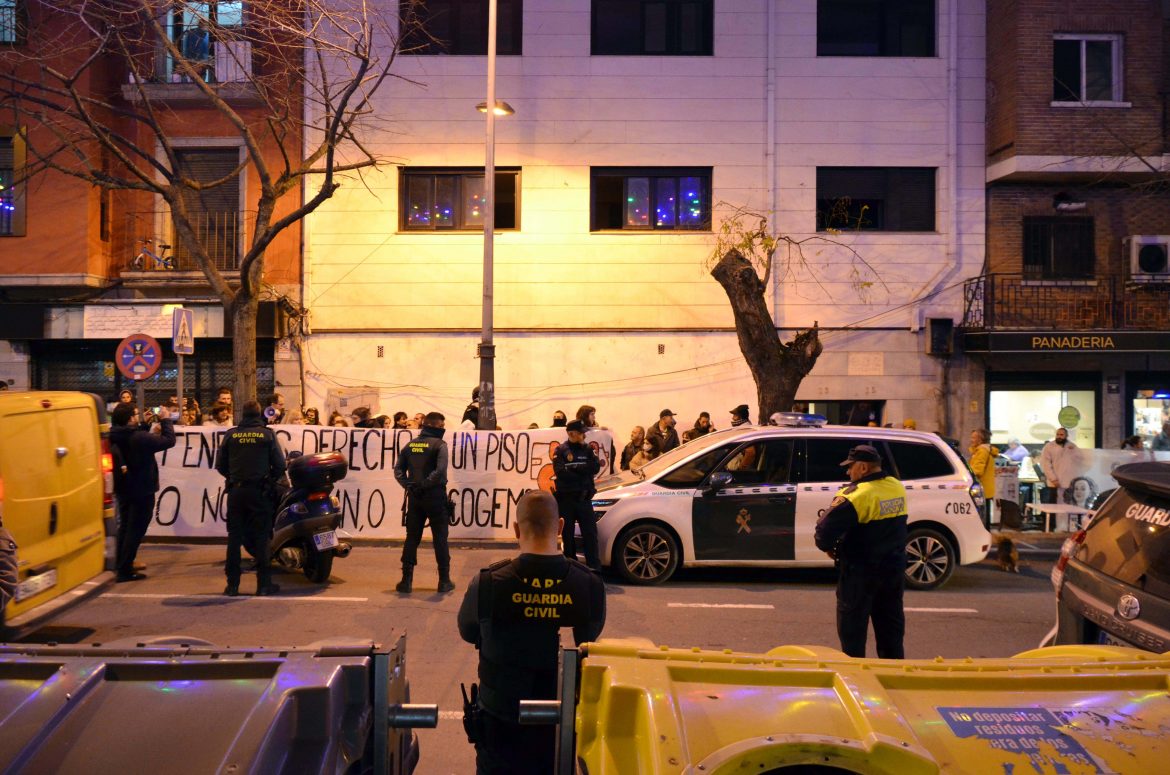 A residential building owned by the state-owned ‘bad bank’ SAREB was deliberately set on fire on Wednesday morning in what appears to be becoming Spain’s most violent mass eviction since the 2008 crisis began.

Residents of Calle Real 13, a property in Collado Villalba near the Sierra de Madrid, were woken by the smell of smoke. Within minutes, a fire had engulfed staircases and landings, and smoke billowed out of the windows.

Firefighters successfully evacuated residents through windows and through the smoke-filled stairwell. Medics treated 14 people for smoke inhalation and one for burns. Nine people were hospitalised.

Forensic investigators have reportedly indicated that the fire was intentional as they identified numerous points of ignition. One resident I spoke to feels SAREB is taking advantage of this situation to evict around 100 residents. This would leave them in the same precarious situation they were in before occupying Calle Real 13 just over two years ago, by which point the building had sat empty and abandoned for 12 years.

A local relief effort organised by the Asamblea de Vivienda de Villalba (AVV) has been helping the displaced residents, but no social housing or even temporary hostel accommodation appears to have been offered by the local council. For now, around 40 residents are being taken in by friends, or by neighbours unaffected by the fire. But this is not a long-term solution and also not one that all residents are comfortable with.

Another resident of the building has ash and soot covering his hands. He asks for a pen so that he can write down the name of a hostel where he hopes to sleep that night.

“Nobody is asking us how we are,” says a resident, who said that she didn’t dare open her door during the fire as she could feel the heat coming through. She explains that her neighbours are still in shock and “can’t get the image of flames and smoke out of their head.”

Despite evictions in Spain being generally connected to the financial interests of property owners, the act of arson that occurred on Wednesday morning feels like an aporophobic hate crime (an attack on people specifically because they are living in poverty). Some residents are also immigrants, ethnic minority, Muslim and disabled. It cannot be ignored that hate crimes may have been committed.

In contrast, people who can’t afford decent housing in Spain are criminalised by aporophobic policy, irresponsible media discourse and a legal system unable to identify that the real crime is the refusal to provide affordable housing for all.

Last night in Villalba, around 200 residents, local neighbours and activists from all over the Comunidad de Madrid gathered on a square nearby and in front of the burnt-out building. They denounced the arson attack, the failures by the local council to help residents, and demanded a long-term housing solution for all residents.

But, as reported by Público, immediately following the protest around 10 private security staff, a representative of SAREB and several bricklayers arrived at the building. By the morning, entrances to the staircases where residents access their flats had been bricked up. Their furniture and other personal belongings are still inside.