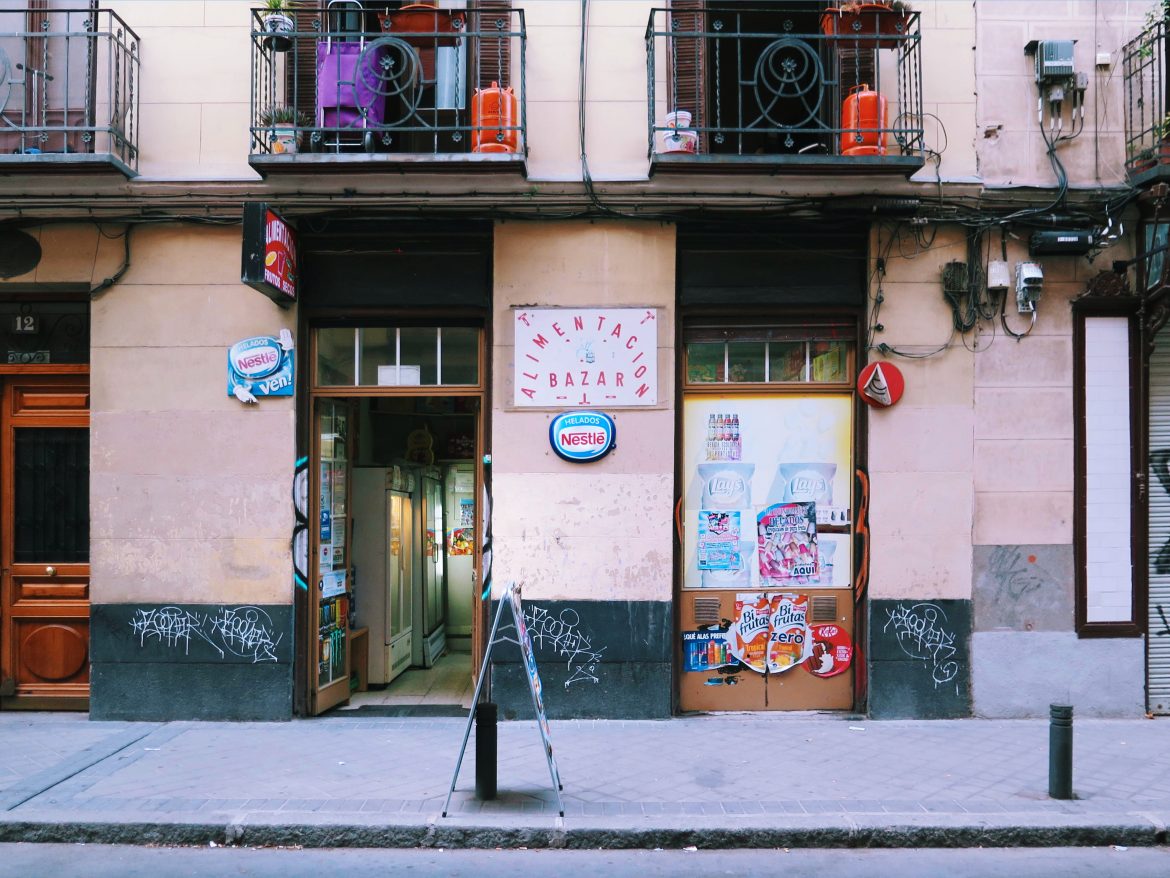 A year ago, my photo series of 100 of Madrid’s no-frills bars reignited the nation’s love for a time-honoured aspect of Spanish culture, but around 20 of these no-frills bars are actually Chinese-owned.

Earlier this week, I was thrilled to see this article in El Comidista giving Chinese bars the credit they deserve for preserving an aspect of Spanish culture we all claim to cherish, yet so few are prepared to preserve. And then my thoughts turned to our corner shops: Madrid’s other well-known Chinese-run businesses, and to the element of mystery surrounding their community.

My high-school bestie is second-generation Chinese, born in the UK to two Chinese parents. As the only non-white teenagers in our class, we bonded over our mutual dilemma of how our culture at home was different to the culture surrounding us.

Catching up with her on Skype, with her mum pitching in every now and again, she helped me piece together the story of Spain’s Chinese migration…

China has a very top-down authority, and with the one-child policy in place until 2015, a lot of people wanted to escape. Zhejiang seems to be where almost all of Spain’s Chinese residents are from – it’s quite a poor region and many people who leave the country do so without skills. When they arrive in Spain, they look for work that doesn’t require a degree, such as owning a shop, bar, restaurant or business.

Many Chinese nationals are business owners, and in Madrid, the corner shop has become culturally linked with the Chinese – so much so that some locals derogatorily refer to their local alimentación or bazar as a “chino”, though this term is falling out of fashion.

And of course, this term jars with Brits, harking back to the racial slurs of the 1980s and 1990s aimed at Pakistani-, Indian- and Bangladeshi-run corner shops. But the Spanish term is clearly indicative of the role the Chinese play in the corner shop scene in Madrid. I’ve even heard a corner shop referred to as a “chino español”  because it was run by a Spaniard.

Allegedly, the concept of the corner shop/convenience store as we know it didn’t really exist in Spain until around the millennium. Legend has it that Chinese entrepreneurs saw a gap in the mercado sector and created a mini boom in small, local businesses. This concurs with the graph above, which goes back to 1998, and the graph below, which shows that 54% of Chinese nationals working in Spain are registered as self-employed and are the largest group, by nationality, to be economically autonomous.

The presence of the Chinese in Madrid has had a significant impact on the city’s culture too. As explained in this recent article in El Comidista, many Chinese nationals are helping to preserve Spain’s much-loved neighbourhood bars – and the same is true of our beloved corner shops. But one of the most visible impacts the community have had on Madrid is something that is not quintessentially Spanish.

The Chinese community in Madrid is concentrated in the neighbourhood of Usera, aka Madrid’s China Town, whose swinging red lanterns, Chinese-only ads and hole-in-the-wall restaurants make the narrow, gridded streets around Usera metro station feel more like a suburb of Hong Kong. 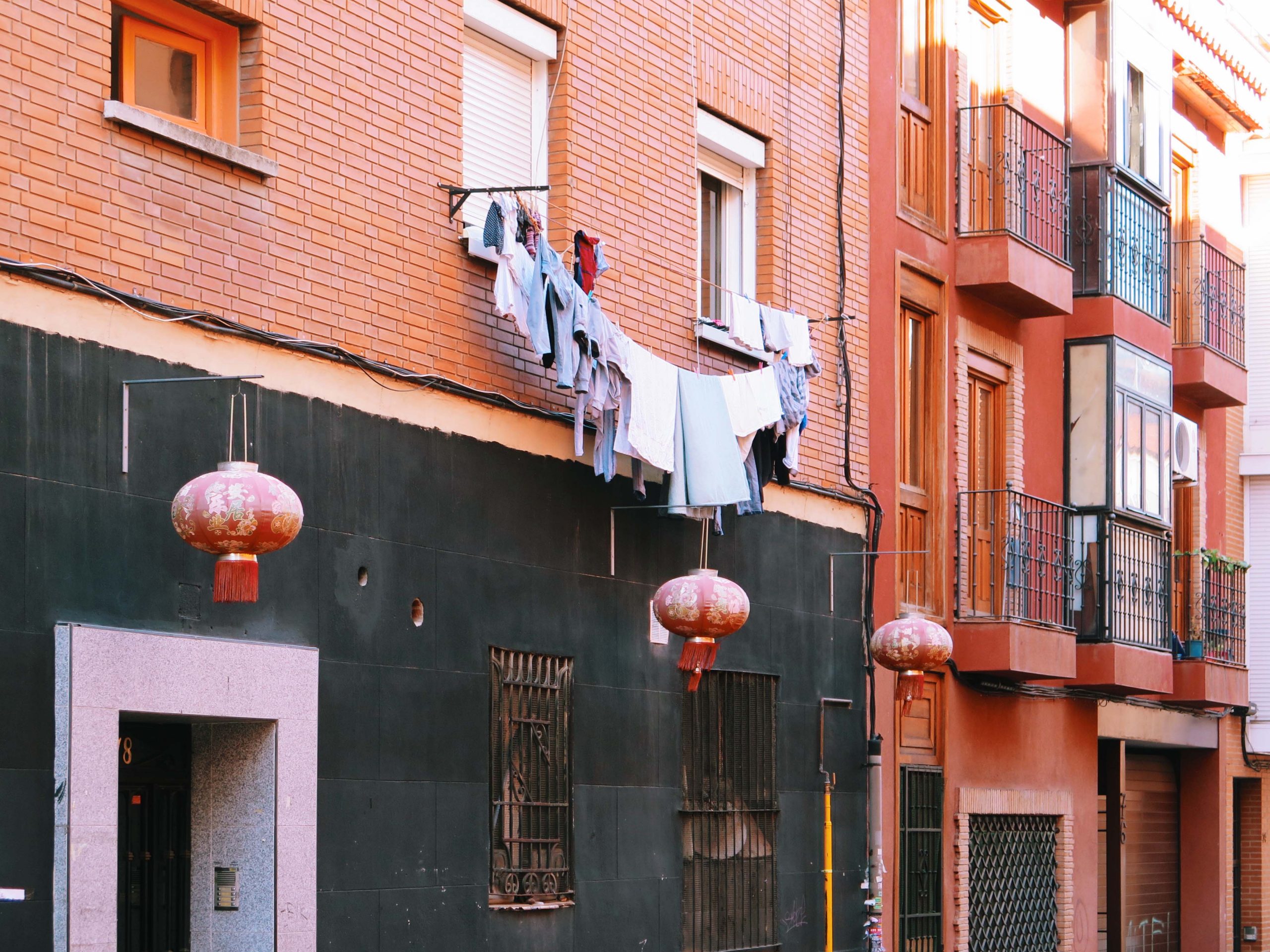 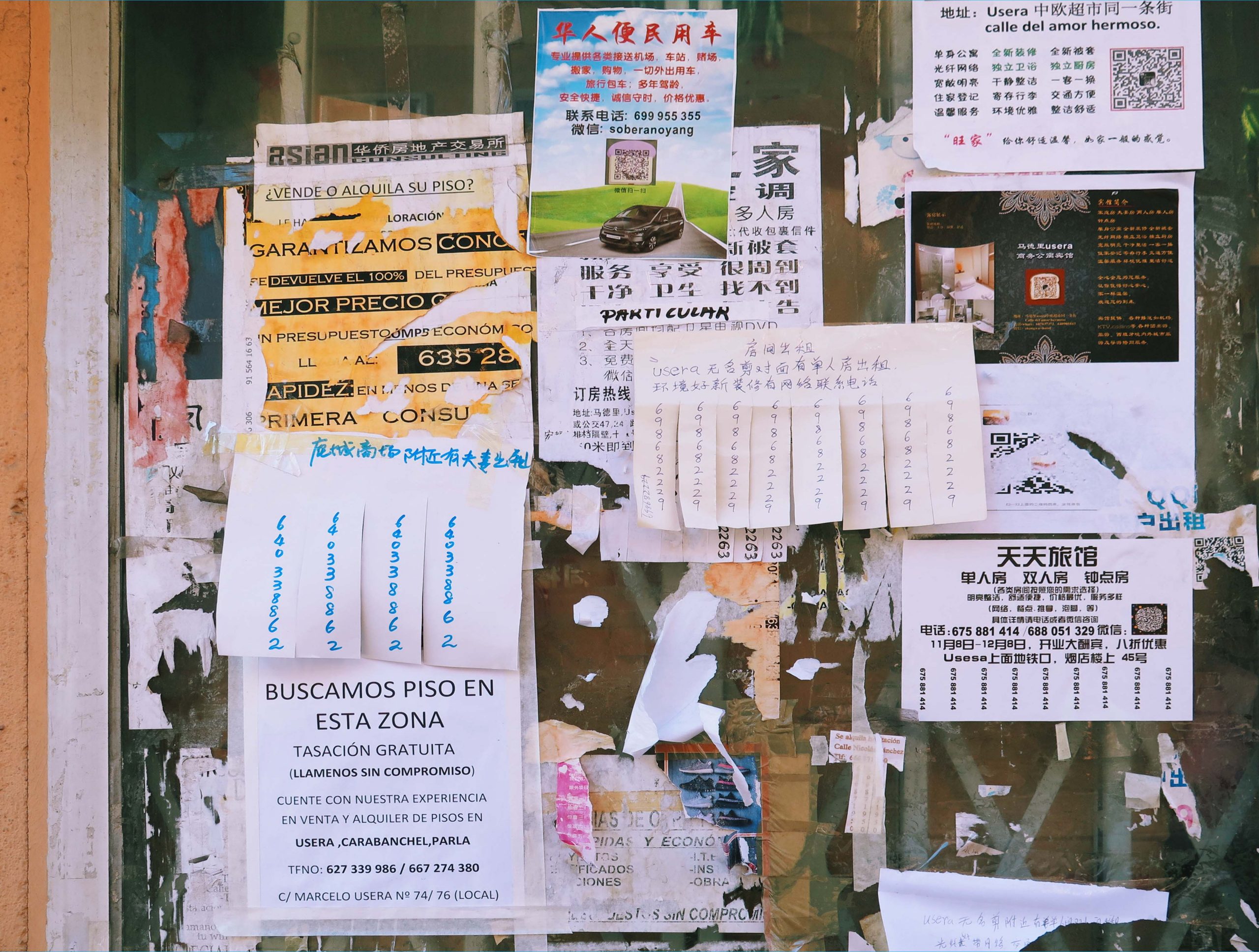 The Chinese husband and wife team, and their teenage children who speak perfect Spanish. The shrine on the top shelf next to the jarred pulses. The Chewits the mother gives us every time we buy alcohol. The speed the father can run to catch up with thieves who think they can get away with stealing a packet of chewing gum. The awe when he returns with the gum and he’s not even out of breath. The shifts they put in seven days a week from 9 am to midnight. The abuse they get after dark, and the protectiveness we’ve developed of them…

They’re a community we must endeavour to learn more about. 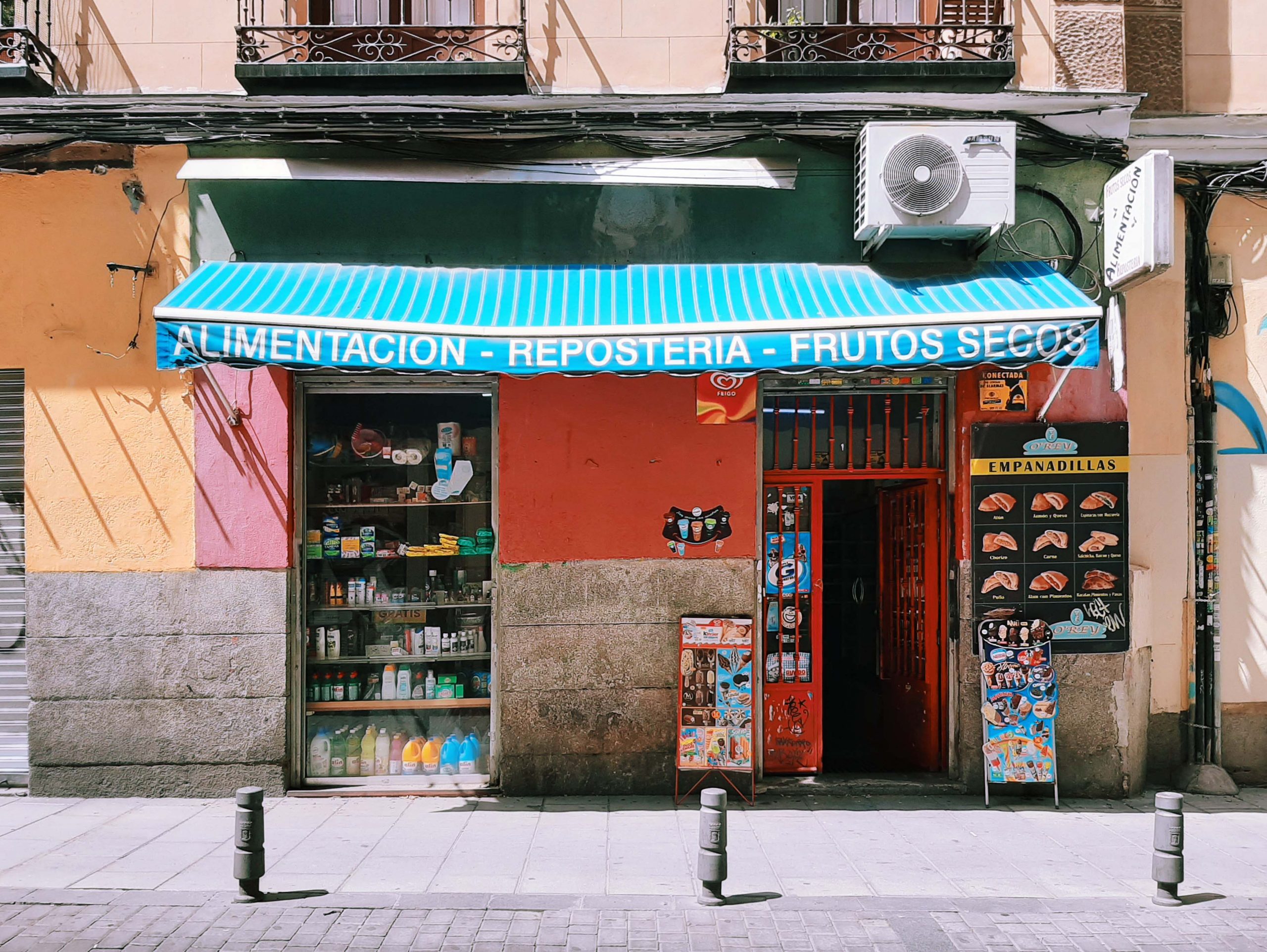 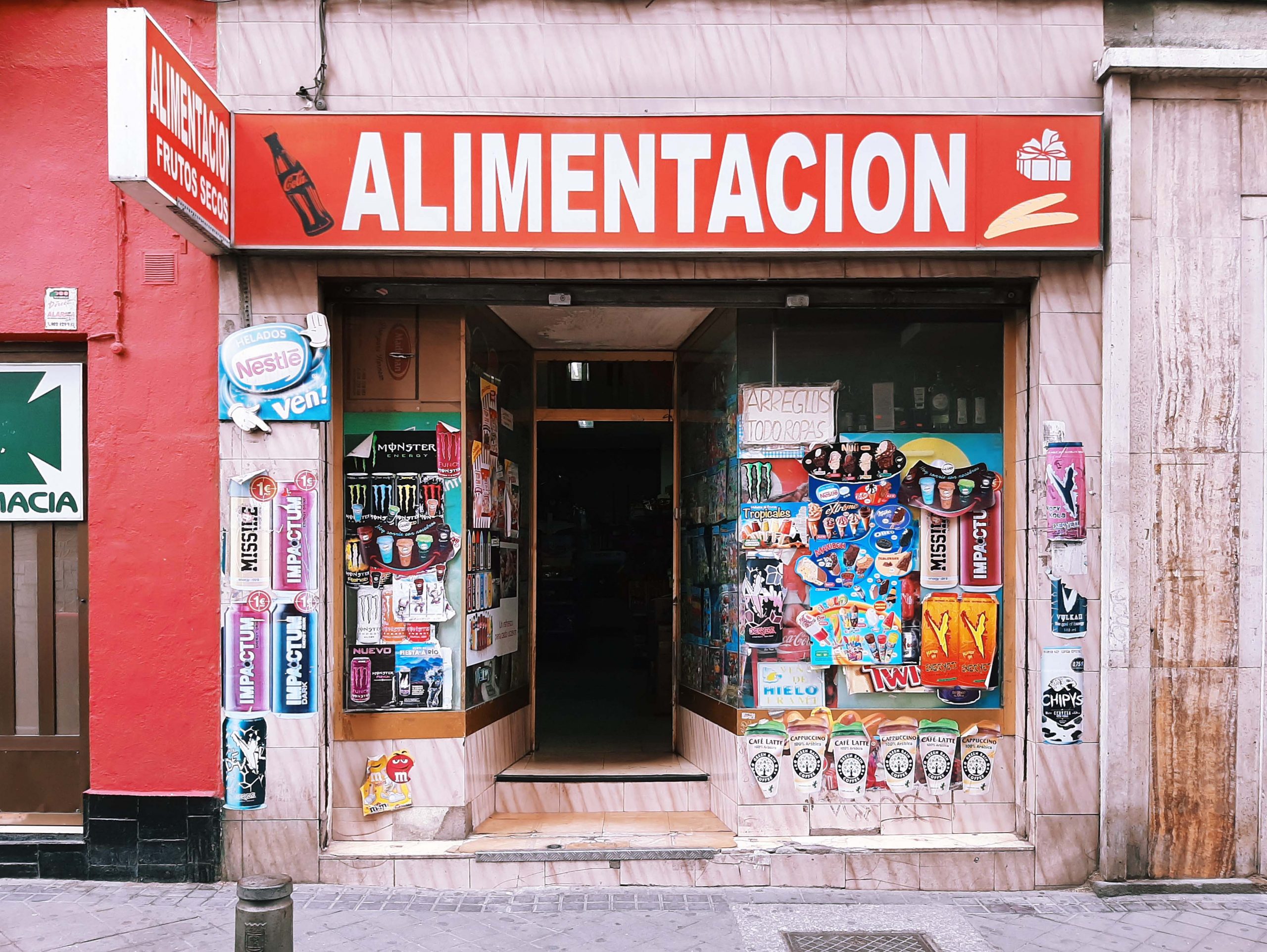 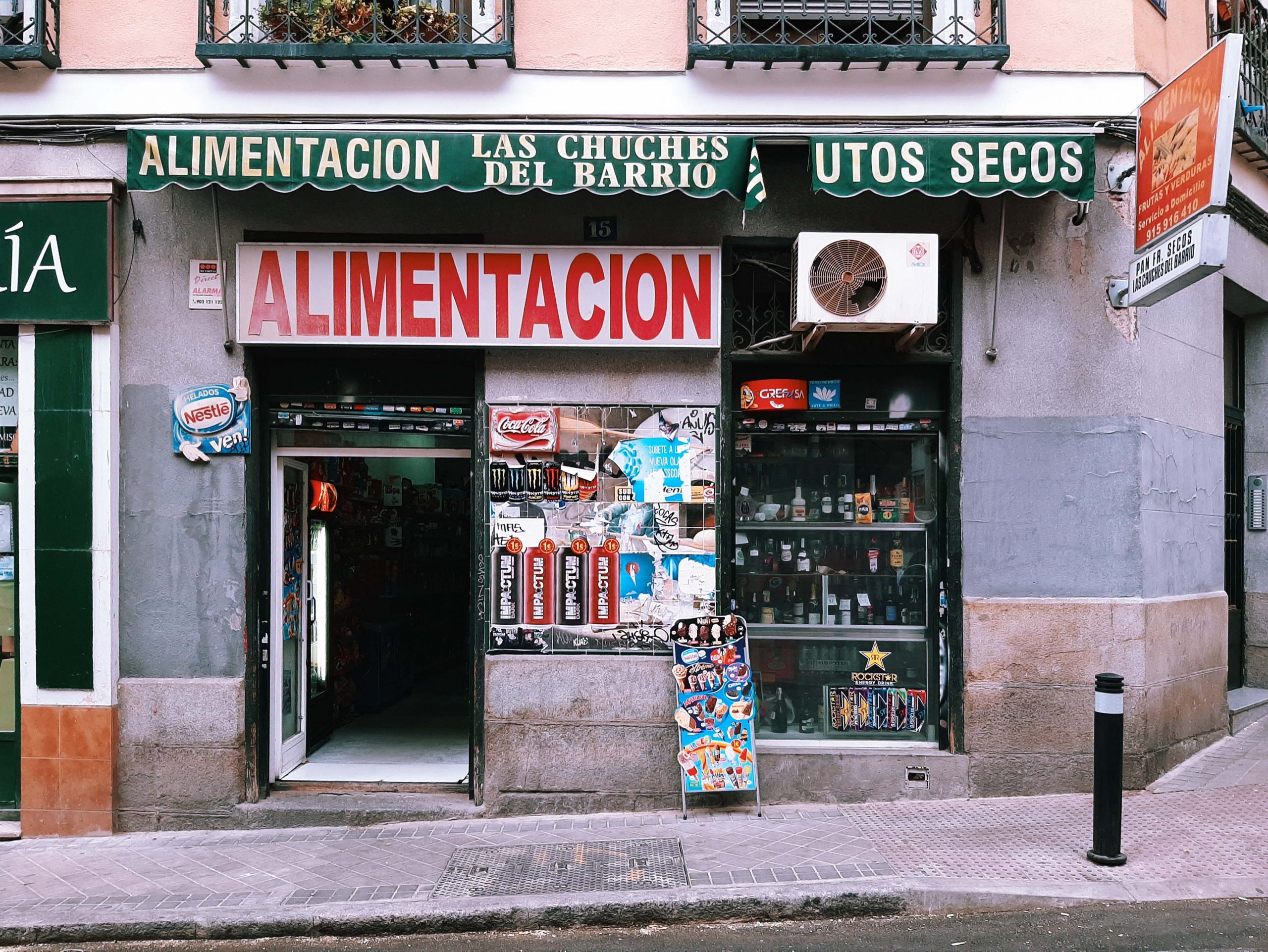 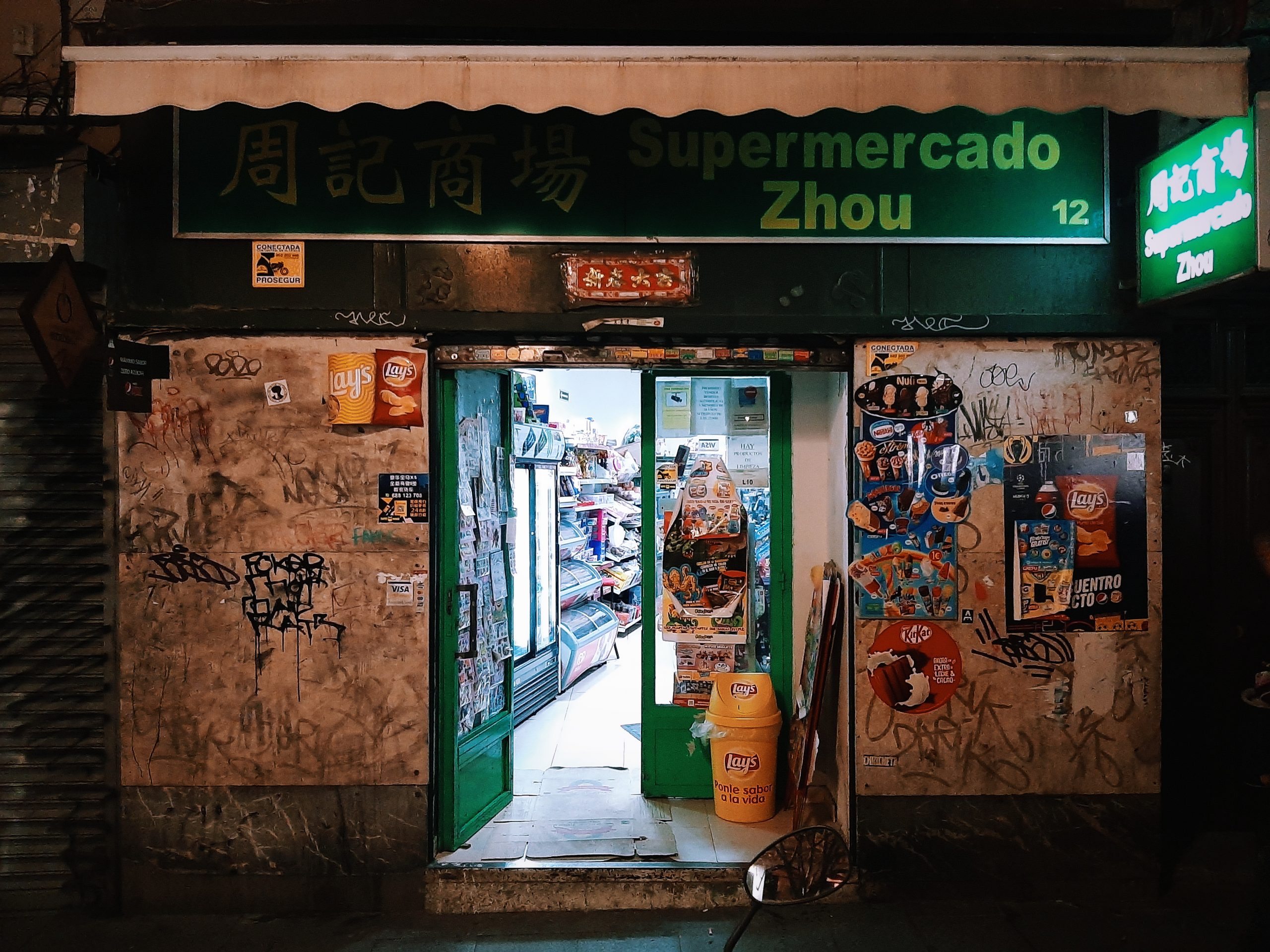 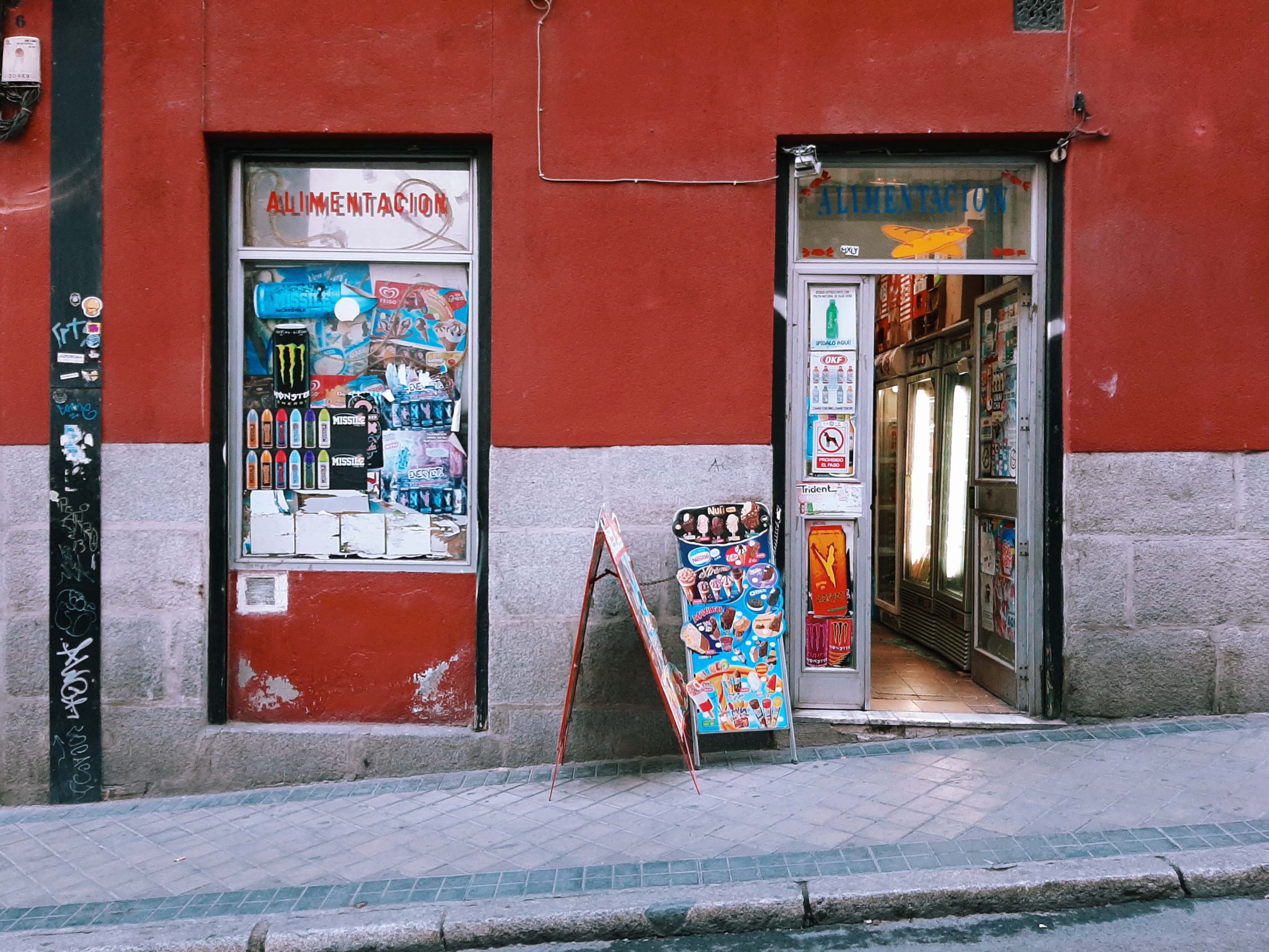 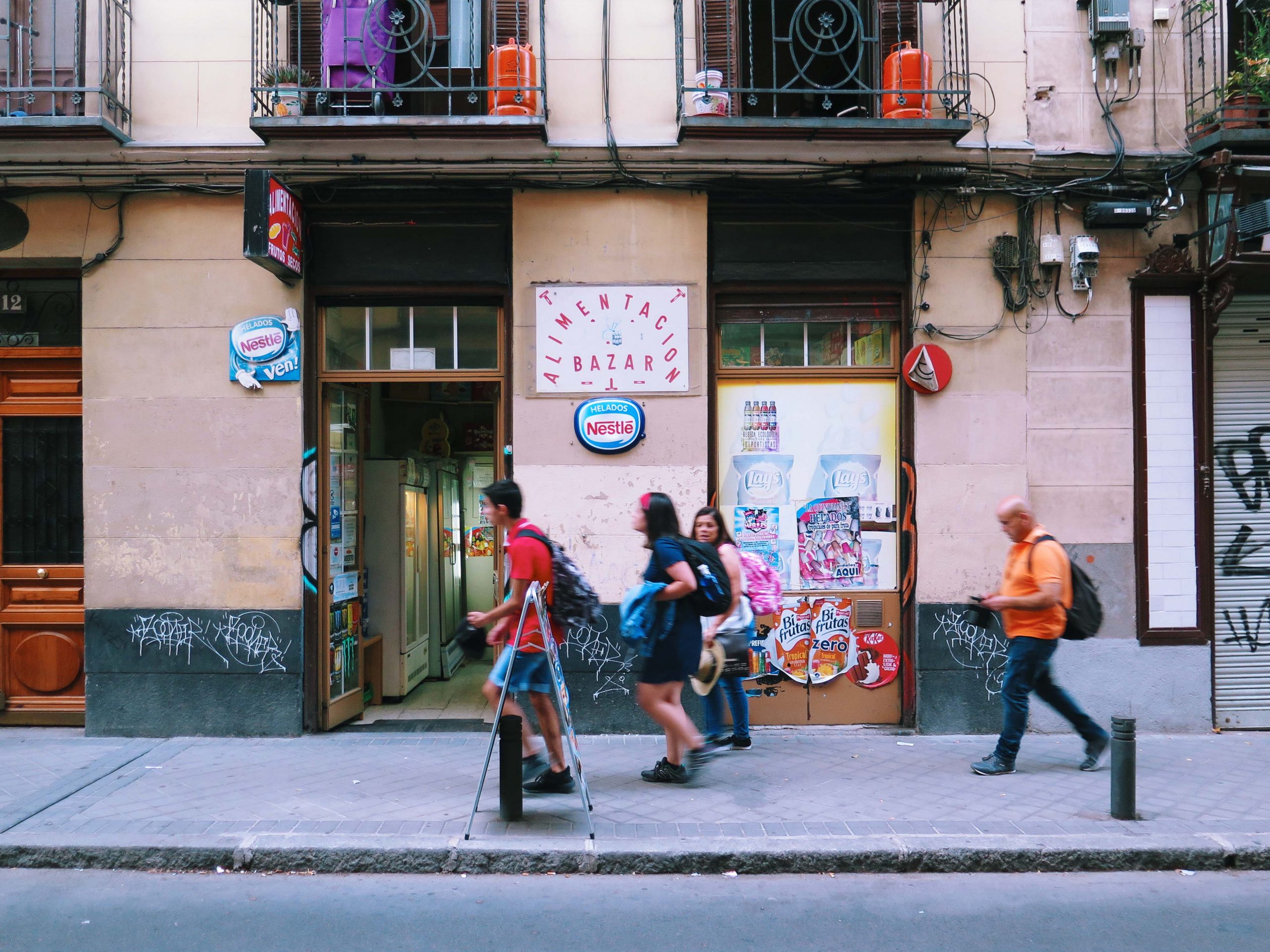 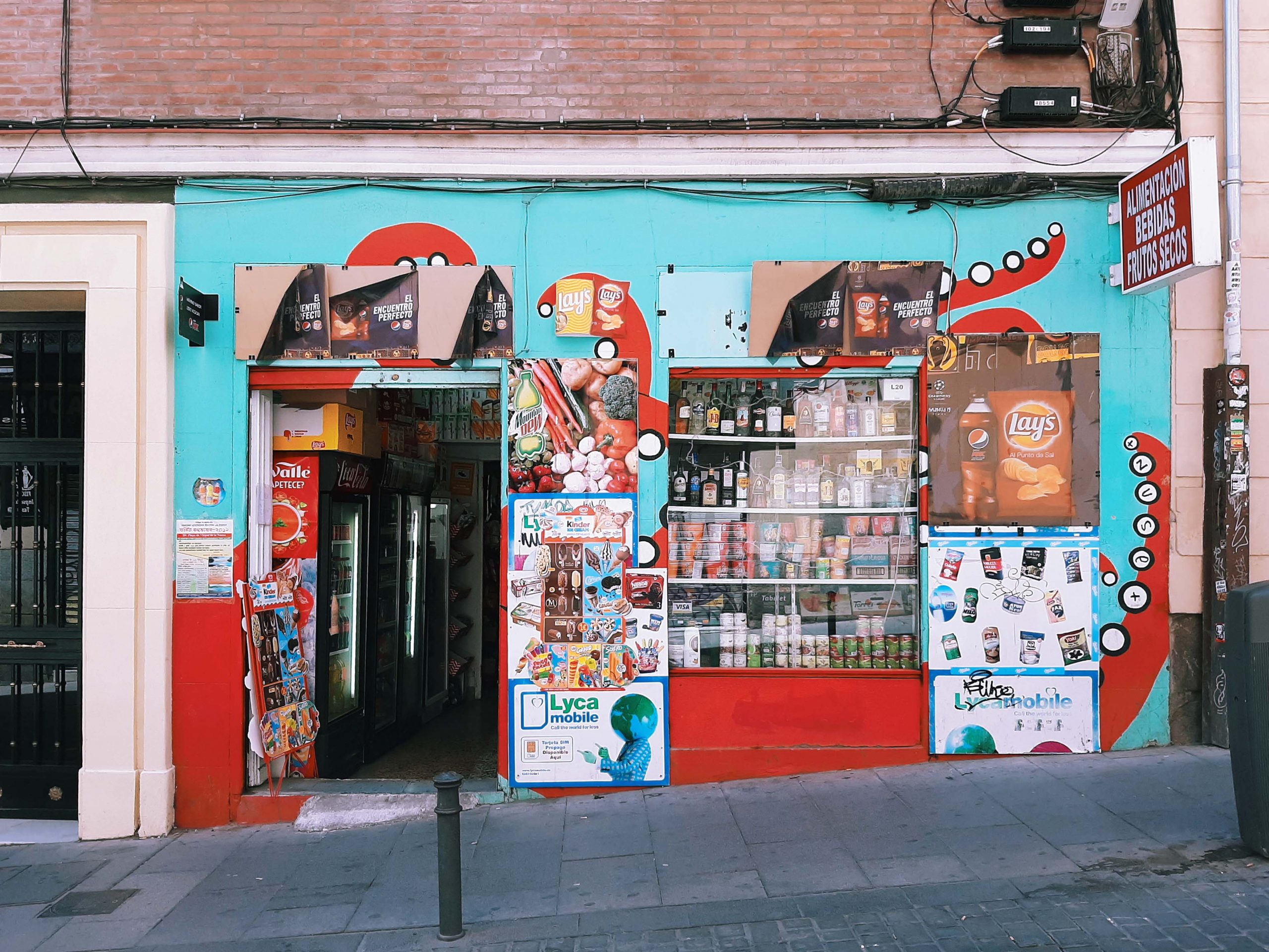 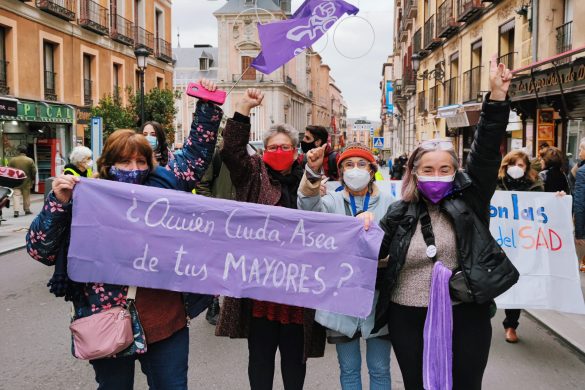 I say ”bajo al chino” when I’m going to the Chinese run shop across the road. It has never occurred to me that it could be derogatory. Sometimes I say ”voy al Ahorramás”, or ”al Día”, and sometimes ”voy la chino”. To me it’s just a shorthand way of saying the shop owned by the Chinese man across the road. I’m not sure it can be compared to saying ”Paki shop” as people did in the 70’s, because Paki is clearly a term of abuse, whereas ”chino” is simply the nationality. I’d be interested to hear what other readers think.

Hi Leah, this is a great article. One thing I would say is that Zhejiang is actually one of China’s richest provinces. The sheer size of China means that a lot of the migration is internal – from countryside to city within a particular region or from less developed areas (often inland) to wealthier coastal provinces such as Zhejiang, Guangdong and Jiangsu.

Economic migrants starting from these richer provinces with more international links, therefore, are generally the Chinese people that come to Europe to set up small businesses.

Keep up the good work!

Hi Patrick, you do seem to be right. Zhejiang has a growing economy and is actually quite wealthy, though this could be just for the lucky few as articles talk a lot about billionaires. My information is based on conversations with numerous Chinese nationals so perhaps there could be a discrepancy based on perspective. Thanks for your comment!

Great article. I have visited and lived in Cadiz province over the last 15 years and was initially surprised by the number of large “Chinese bazaars”, which seemed to increase, year on year. However, the number now seems to be waning – maybe due to over supply, or perhaps people have achieved what they wanted to? Have seen one or two Chinese owned bars, but never an alimentaciòn, to date. (A note on language, these bazaars are often referred to as El Chino, by the locals and Chinese bazaars by English speakers. I don’t think there is any malintent here)

Thanks for your comment. There most likely is no malintent but it’s still a racial slur and is best not used.