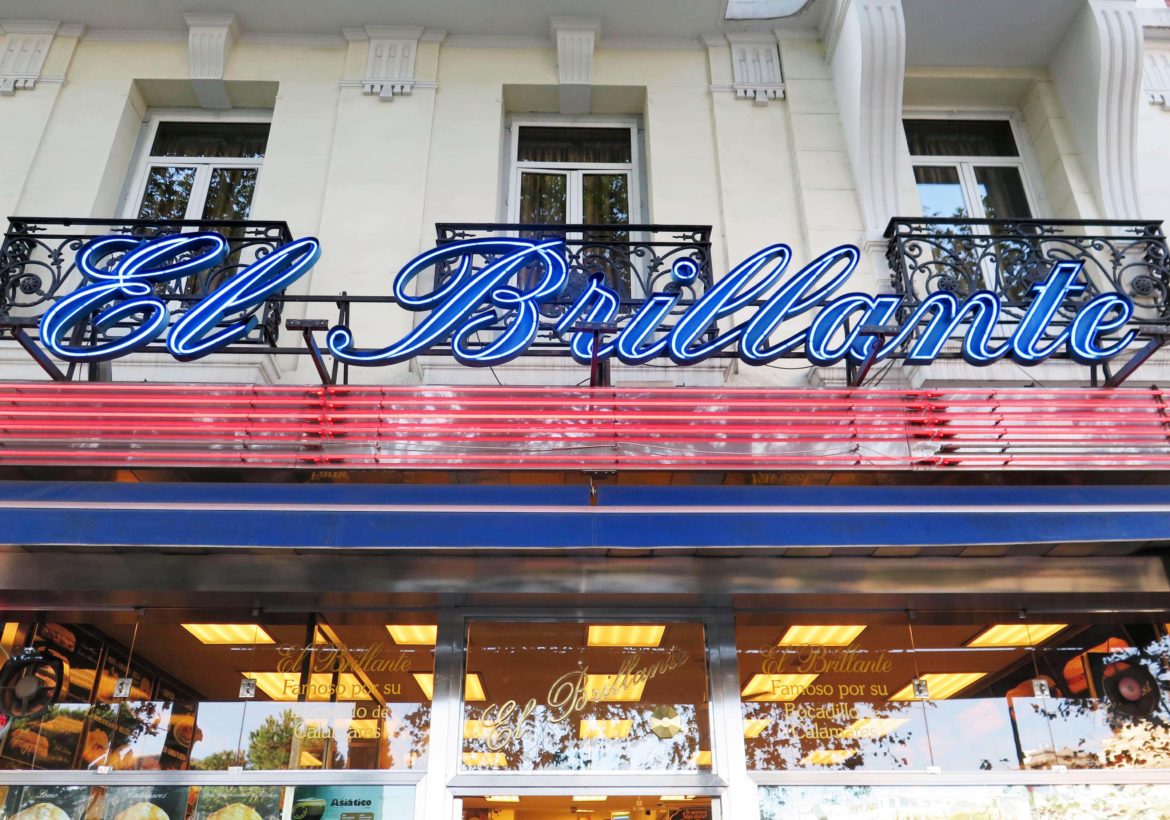 Since 1961, El Brillante has been the first and last port of call for millions of Atocha’s passengers. A first caña stood at the bar sets the tone for the rest of your stay, and that final bocadillo de calamares leaves you with a belly full of fondness for Madrid. Being in such a prime spot for more than half a century, El Brillante has predictably also caught the eye of a lot of tourists, yet this Madrid bar effortlessly holds on to its deep-rooted Spanish veracity.

El Brillante is as atmospheric and rammed as a busy neighbourhood bar, and its size has inevitably turned things up a notch: hear your order shouted across the bar and feel the shards of your shattered inner peace hit the litter-strewn floor. Your battered calamari rings are already being deep-fried in olive oil as though the place knew you were coming, and your bocadillo de calamares is served up less than half a minute later. It’s delicious, and still one of the best in Madrid – as are their chocolate con churros.

“When I was a child, I used to come here every Sunday with my father. We’d take a train to Atocha, come for a bocadillo de calamares and then go to El Rastro.” – Rubén 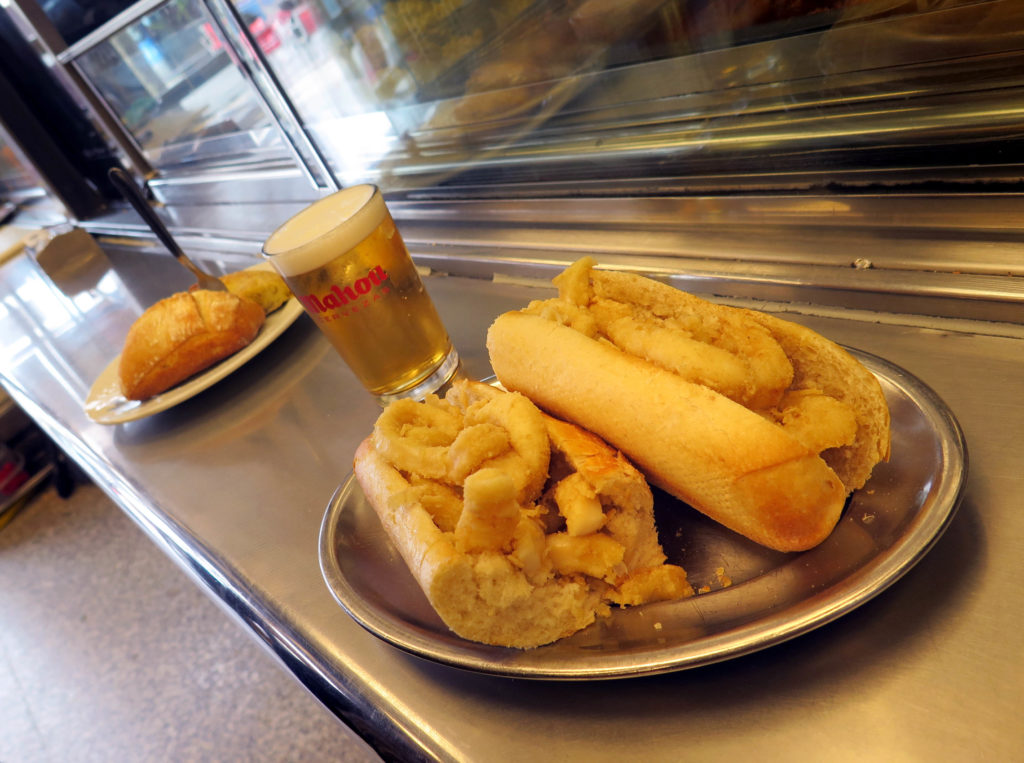 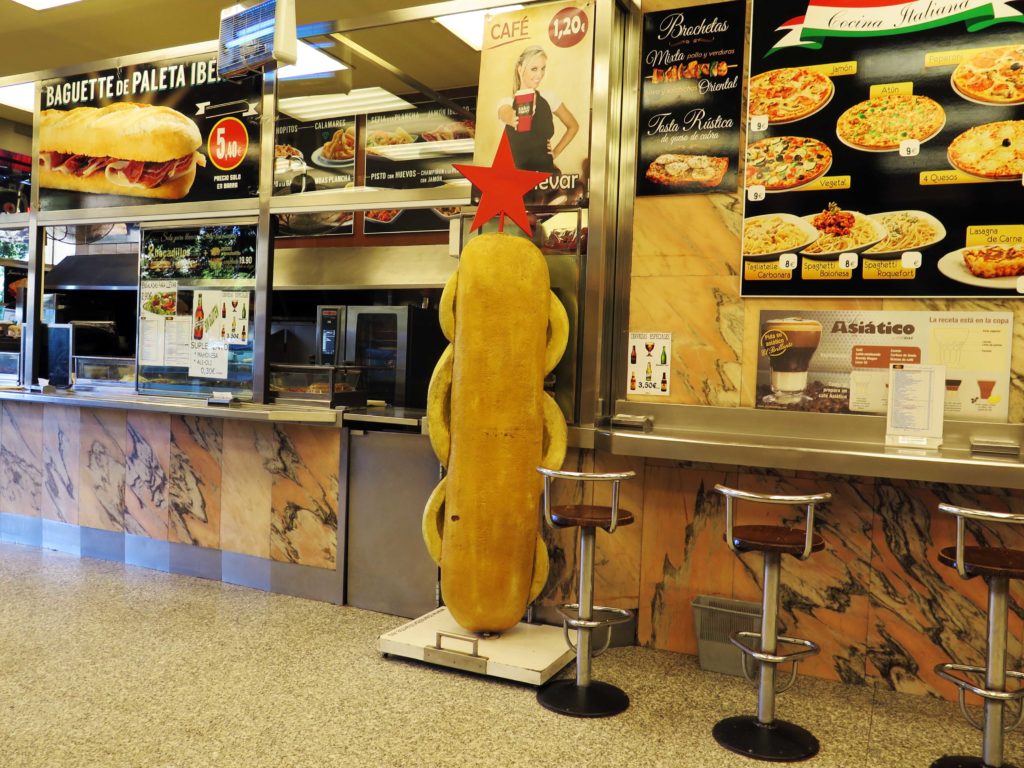 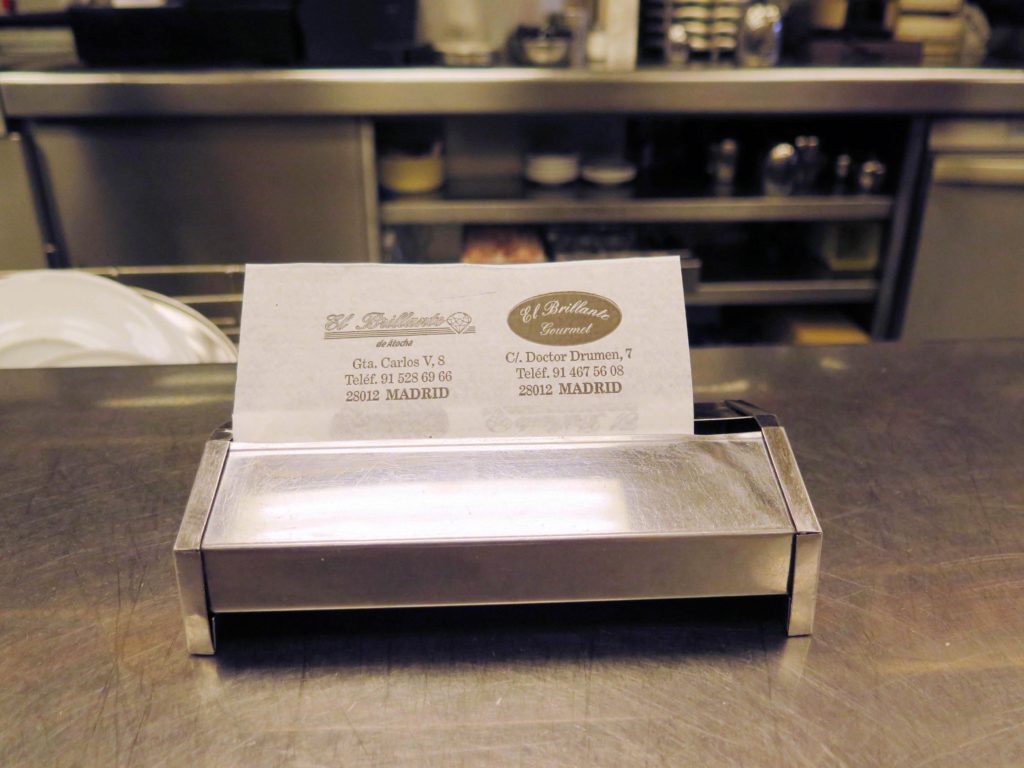 El Brillante runs an impressive operation – it’s colossal and has a capacity of 147, but no one’s counting on a Sunday lunchtime, when this number must easily double. The bar extends for the depth of an entire block and has two entrances: one on Ronda de Atocha and another on the square in front of the Reina Sofia, where it has a terrace. Some say that bars with two opposing entrances were popular places for secret anti-Franco meetings, so that if the police entered, you could escape out the other entrance.

The bar is lively – every waiter and waitress is suited up and ready for the growing multinational crowd hastily grabbing a spot at the bar, and it looks like a fun place to work. I was a waitress, and nothing quite beats a busy shift of bright-eyed customers. 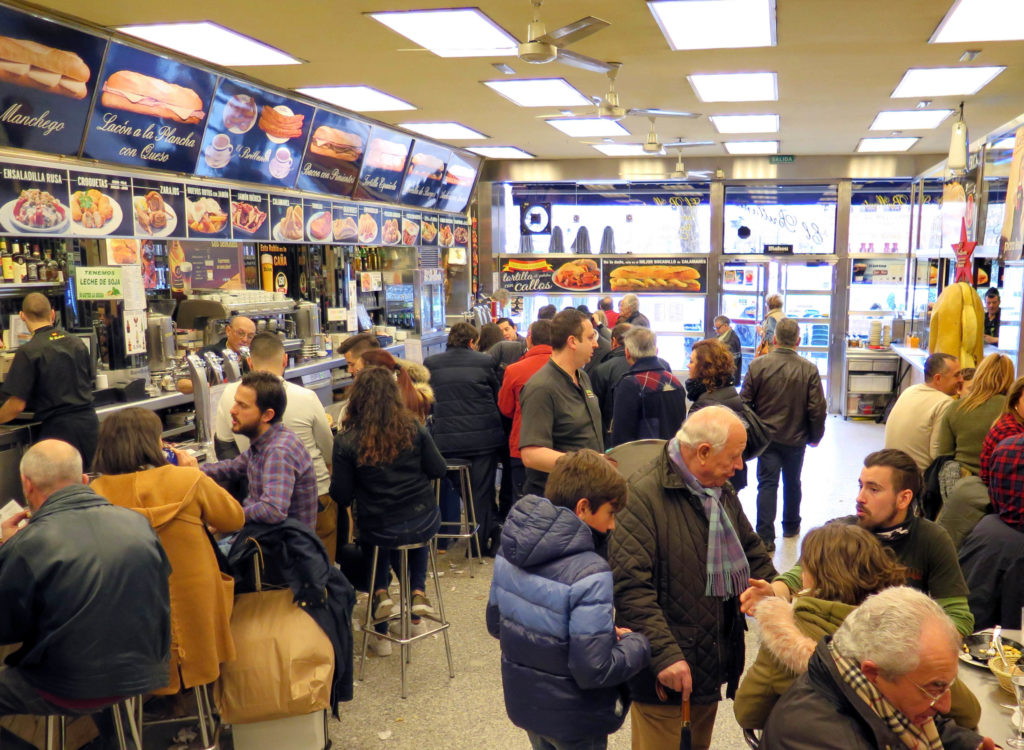 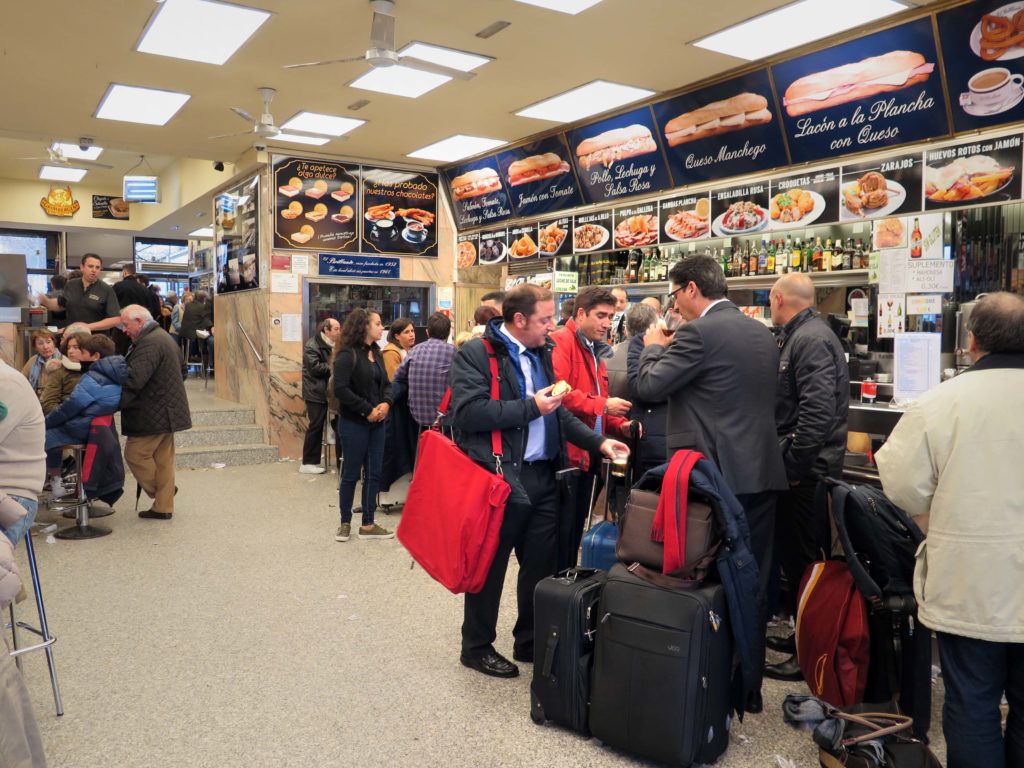 I had mixed reviews from my madrileño friends: some said it was touristy, overpriced and not how it used to be, and others were life-long fans and routinely for a bocadillo de calamares with their family. Either way, this is a successful family business that’s been bringing a devoted crowd through its doors 18 hours a day, every day, for 56 years – and there’s simply no other place like it any more. The owner of El Brillante is one of two brothers – the other brother owned El Diamante in La Latina, another proud Madrid bar. Unfortunately, he was getting “very old and tired”, according to one of the staff I spoke to a couple of months ago, and El Diamante sadly closed its doors for good just before Christmas. 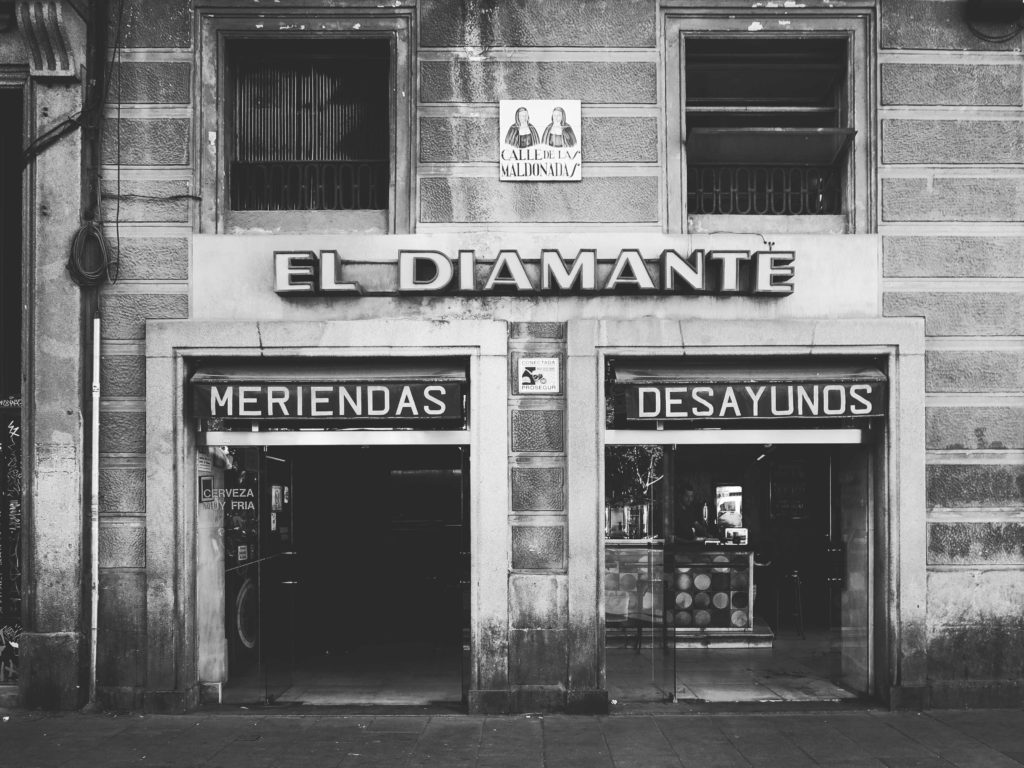 El Brillante, on the other hand, shows no signs of giving up – I’d like to think that it’s just too well-known and popular, but so was El Diamante. Half a dozen waiters lost their jobs overnight, and La Latina lost one of its favourite neighbourhood bars.

We can only hope that Madrid’s much-loved station bar will be there forever but, for now, let’s enjoy it while we still can.

Best calamares in Madrid. Not cheap but then the best of anything is almost never the cheapest option. I once asked how they made the calamari so tender, I was told was soaking it in milk the night before.