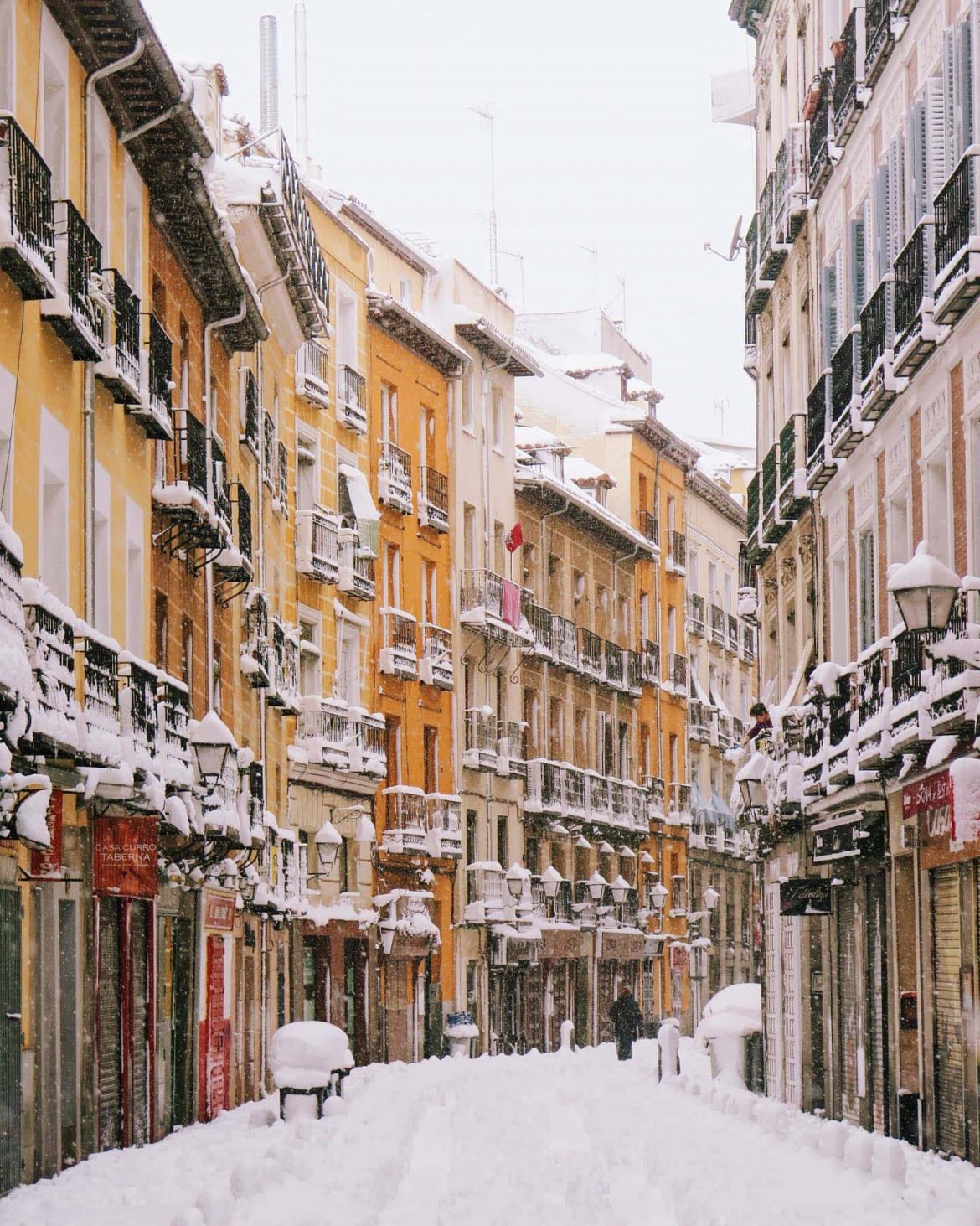 Now that the last remaining piles of snow have finally melted away, let’s reflect on a fortnight of Filomena’s presence in this city. With zero Council preparations and unprecedented snowfall, how did Filomena’s force unfold and take Madrid from its most beautiful to a disaster zone?

Many thought that this was it, so we all headed out to enjoy the snow from our natural habitat: the no-frills bar.

January 9, Filomena has landed and she’s decorated Madrid like a snowy paradise.

We awoke to find that Filomena had dropped a metre of snow across the city, so we did what anyone would do in an accidental snow theme park: play!

Temperatures bottomed out at -13C and stayed there, leaving rough sleepers vulnerable to freezing to death.

Four central Madrid metro stations (La Latina, Opera, Tirso de Molina, Estación del Arte) remained open for a week for homeless people to shelter from the freezing temperatures and to be attended to by Samur Social. Opening up metro platforms is something Madrid and many cities around the world do in extreme weather crises.

This is far from a solution but it will hopefully help save some lives during this storm. Please share 🙏

With no snowploughs in sight, and with concern over lack of mobility, Madrid’s residents had no choice but to clear the snow and ice ourselves.

On January 12, the police starting assisting the neighbours in clearing the snow and ice from the streets.

Little by little, we’re getting there. The streets are slowly being cleared, delivery vehicles are slowly (and carefully!) returning, and the police are back (and clearing the streets).

On January 14, the mayor of Madrid asked for the city to be declared a Disaster Zone.

Over 2,000 people have been hospitalised with ice-related fractures, bins haven’t been emptied for a week, post has no delivery date, schools remain shut, large areas of pavements have now been taped off with risk of falling ice, emergency services are struggling to operate, a quarter of trees across Madrid have been damaged, businesses can’t restock and open, and the Cañada Real is in its deepest crisis (not that this was factored into the Disaster Zone discussion).

The City Council knew Filomena was coming for a whole week, right down to the centimetre. And there were zero preparations.

On January 16, the body of a man emerged from beneath the melting snow in Barrio Arganzuela.

We don’t know how long he’d been there, and it’s believed that he died from the freezing temperatures.

During Madrid’s fortnight-long deep freeze, Samur Social were able to open up just 559 beds for people sleeping on the street, despite there being around 3,000 people sleeping rough, at the last count.

Many of these beds, however, are in hostels that are far away from the city centre where the majority of homeless people sleep, and with the bad weather making it difficult to access the hostels, four central metro stations opened up overnight for them to escape freezing temperatures.

But even once they’d escaped the snow and were fortunately allowed to bring inside their belongings and pets, provisions inside the stations have been minimal and undignified, with people being allowed to simply sleep on the tiled floor. It was you who brought blankets, food, hot drinks and clean clothes.

As Filomena recedes, Madrid has a moment to reflect.

Why don’t people just get a shovel and clear the snow themselves?

People expect municipal services to do everything.

Stop being cry-babies, it’s just a bit of snow.

We don’t have shovels because we live in a densely populated urban area which streamlines the provision of public services. It was part of the post-war model that brought millions from rural areas to work in urban hubs, and this shift continues today with over 80% of Spain’s population living in cities. More arrived today and more will arrive tomorrow.

We left our families behind for work, especially in Madrid, a city of migrants. Family is no longer the basic unit of social security – public services are designed to take their place. That was the post-war model, but with every cut to public services, the deal we subscribed to is further broken.

As hard labour becomes increasingly automated and the urban workforce shifts towards service work, manual skills don’t seem necessary but, of course, we still need them. Public services are supposed to be our family unit – a big family unit that we all chip into and use. But as cuts shrink it and leave us without the help we need, especially in a time of crisis, we turn to our next closest family: our neighbours.

Some of us had shovels leftover from a renovation, some porters had one in the basement just in case. Most of us had brooms whose handles we used to chip ice, and some with spare cash were able to buy up the two or three shovels gathering dust at the local DIY store. And some of us are strong, so we cleared paths for our more vulnerable neighbours. But none of us were equipped for what Filomena brought and nor should we have been: public services were supposed to be there for us, because what individual can afford a snow plough?

Cuts to public services affect the poorest in society first – those without a shovel, a car, a home. Shifting responsibility to the individuals and communities is dangerous: it shifts the blame for failure too and undermines the whole idea of collective provision of public services as a public good.

Filomena has gone, but leaves a quarter of all trees in Madrid damaged.

Not long after Filomena is gone, Madrid prepares for its next disaster: the gas explosion.