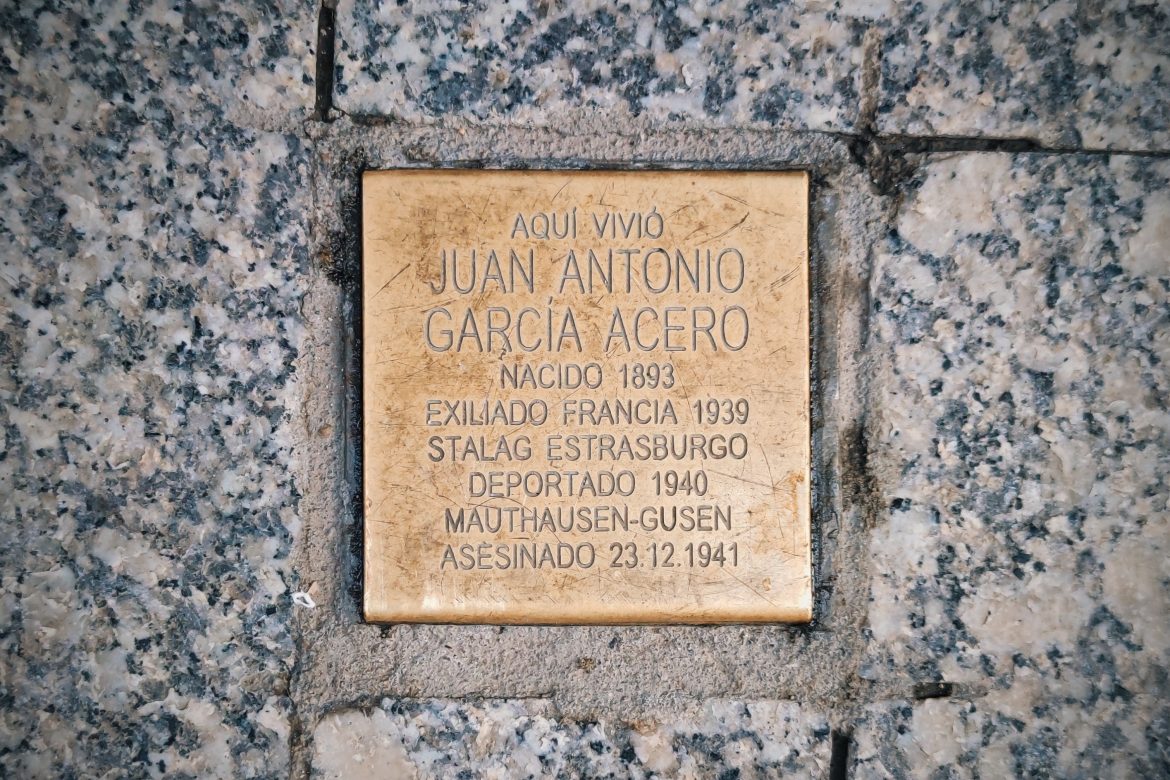 Over 75,000 Stolpersteine (stumbling stones) have been installed across Europe, marking where victims of Nazi war camps last lived by choice. Each small golden stone bears the name of the victim, their date of birth, the date of their camp deportation and when their lives ended – there are so far 12 in Madrid (update from May 2022, there are now hundreds).

Around 9,300 Spaniards found themselves imprisoned in Nazi concentration camps during the Second World War and some 5,000 died there. Spanish prisoners were mostly political exiles or Republican sympathisers who fled to France after the civil war ended in 1939 in order to avoid execution by the Franco regime. But their escape was short-lived.

German Nazi soldiers entered France and captured many Spanish refugees, some fifteen thousand of them. They were deported and put to work in prison camps, one of which was Mauthausen in Austria.

On Calle Mesón de Paredes, just around the corner from the ruins of the civil-war-damaged Escuela Pías, you’ll find a Holocaust memorial stone dedicated to a Lavapiés pastry chef.

Manuel García was a young Spaniard who lived in the historic working-class area of Lavapiés, starting his patisserie career in 1930. By 1936, he headed up the pastry team at the Hotel Nacional, and had met Carmen, his would-be life partner. But, when the Spanish Civil War started in 1936, García didn’t hesitate for a moment to join the Republican militias to defend his city from Franco’s troops.

He fought in the Sierra de Guadarrama, in the Battle of the Ebro. On January 25, 1941, he was captured and sent to Mauthausen: prisoner number 3243. Just a few months later, he was transferred to Gusen where he died on July 3, 1942 of “pulmonary tuberculosis”.

On Calle Huerta del Bay, you’ll find another stone that remembers Mauthausen camp victim Juan Antonio García Acero. He’s the deceased brother of a current neighbour, who in her old age still lives in their family home, in a traditional corrala in Lavapiés.

Acero was a policeman who fought in the fifth mixed Brigade for the Republican cause in Madrid before fleeing to France. As is written on the Stolperstein outside his former home, he was killed in Mauthausen on December 12, 1941.

In high school, history books have long stated that Spain remained neutral during World War II and, therefore, our history lessons imply that the Franco regime was not a part of the Holocaust. But remaining neutral in such a heinous crime against humanity is simply not possible, and that is why the Stolpersteine project is so important.

LOCATIONS OF MADRID’S FIRST 12 STOLPERSTEINE TO BE LAID

Four out of the nearly 450 Spanish prisoners were women, and will eventually be added to the Stolpersteine project.

You can also find all Stolpersteine marked on the downloadable MNF Map, here, in the Historic Memory category.

This article was written by Eero Jesurun, a Blogger of the Future graduate of the University of Madrid No Frills! Born and raised in Curaçao, he arrived in Spain as an exchange student. After completing his Ph.D. research on Sub-Saharan immigration in Spanish cinema, he now works at a study-abroad program in Madrid. You can follow Eero’s blog over on Instagram at @Intercultural_Madrid.