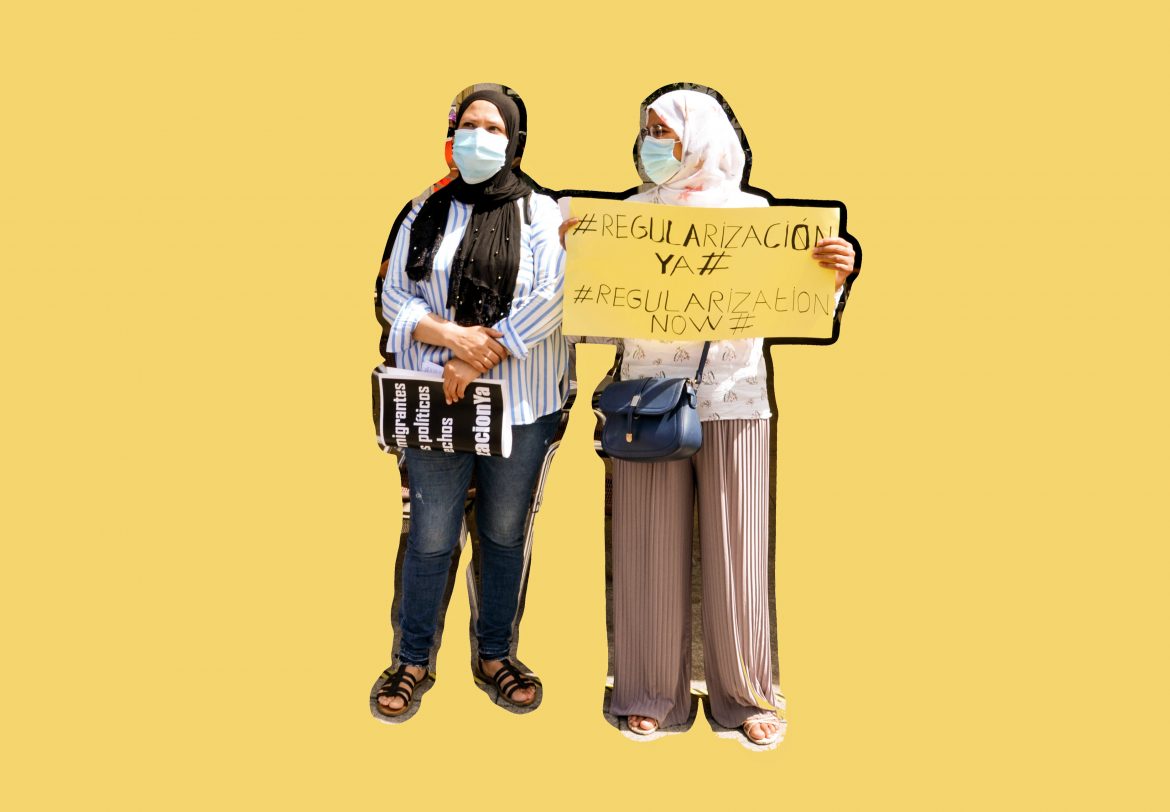 View article in French and Portuguese.

The Regularización Ya movement which fights for the legalisation of migrants in Spain is closely linked with the CIEs No movement. They believe a world without migration detention centres is possible.

There are two types of immigration detention facilities in Spain: Centros de Internamiento de Extranjeros (CIE), and Centros de Estancia Temporal de Inmigrantes (CETI). There are eight active CIEs in Spain, while there are only two CETIs: one Melilla and one in Ceuta, two Spanish enclaves on the north coast of Africa, bordering Morocco.

CETIs are primary points of access for entry into Spain where people can be detained indefinitely until their papers are processed, or deported if their case for migration is declined. CIEs, meanwhile, are where those who have already migrated to Spain are detained, legally for no more than 60 days.

There are several reasons someone might be detained in a CIE:

Regulations on migration detention in Spain leave ample room for injustice. While there is some concreteness to these points, immigrants could easily find themselves in situations where authorities broadly frame their actions as a reason for detention, for example breaking curfew due to being homeless.

Once someone is detained in a CIE, an investigation begins in order to identify them. If a detainee is identified, they are deported to their country of origin. If insufficient identification is found within 60 days, the detainee is released, but left in a legal limbo and not guaranteed the rights that apply to citizens or residents – neither can they be repatriated. Most of those who are subjected to this limbo state are unaccompanied minors, for whom it is often the most difficult to find substantial identification.

CIEs are essentially black boxes to the public. There is little information or documentation about what actually happens to people once they are detained in a CIE, which leaves huge opportunities for human rights abuses.

La Informacion! reports that in the CIE in Aluche, there is limited information about detainees’ legal statuses, nor is there a system in place where abuses can be reported. There are no cameras in rooms where people sleep, in bathrooms or in areas where detainees are frisked. There is also no official way to obtain any videos taken by security cameras.

Moreover, former detainees have reported regular use of solitary confinement, limited or difficult communication with the outside world, and verbal abuse from guards.

Most shocking is the state of healthcare in CIEs. While CETIs have clinics inside the facilities with permanent paid staff, no such thing exists inside CIEs. In Aluche, there is no space designated for medical care and detainees rely almost entirely on Red Cross volunteers for providing medical support. Being detained in a CIE means you are not guaranteed the right to medical care or the right to medical confidentiality. If you are confirmed to be deported you cannot receive a medical exam between confirmation and deportation.

LOCKED UP UNDER LOCKDOWN

Madrid’s CIE in Aluche opened in 2005 with capacity for 214 detainees. The detention center closed on April 2, 2020 due to its inability to conform to Covid-19 health standards, and by May 9, all CIEs in Spain had been closed for the same reason. However, in autumn, the Ministry of the Interior began to reopen them.

Aluche reopened in September, stating that only 67 people could be detained at a time due to the new Covid-19 regulations. Upon its reopening, 46 people were immediately detained with no guarantee that they would be released after completing the legal maximum of 60 days in detention. The closure of borders due to the pandemic means that inmates cannot be deported, leaving them imprisoned until Spain’s national lockdown is over.

On October 28 last year, detainees began a hunger strike protesting the reopening of CIEs in Spain. It’s alleged that they’re being denied access to medical care, and detainees report police telling them that their strike is in vain.

THE ‘CIEs NO MADRID’ ACTIVISTS

CIEs No Madrid is a platform that campaigns constantly for the closure of all immigration detention centres across Spain. They expose institutional racism within the justice system, raise suspicions over detainees’ deaths, fight for law and system change and make the public aware of the overall horrors going on inside Spain’s (and specifically Madrid’s) CIEs.

We asked CIEsNo if they can imagine a world without CIEs:

We pursue with great hope that places like the CIEs will be closed. We believe that it’s possible to build a fairer world in which people are not treated differently depending on their administrative situation, which is used as a justification to mistreat, harass and deprive migrants of their fundamental rights, especially while they are locked up in these places and undergoing the deportation process.

It’s unacceptable that in a state of law there are a lack of rights including health, communication, dignity, all for a minor administrative offence such as not having papers. The conscious suffering inflicted through the immigration law by locking up and expelling poor people to their countries of origin has consequences on their lives, which European States do not take charge of, thus exposing institutional racism.

Migration is a right.

This article was written in collaboration with Melina Vanni-González.