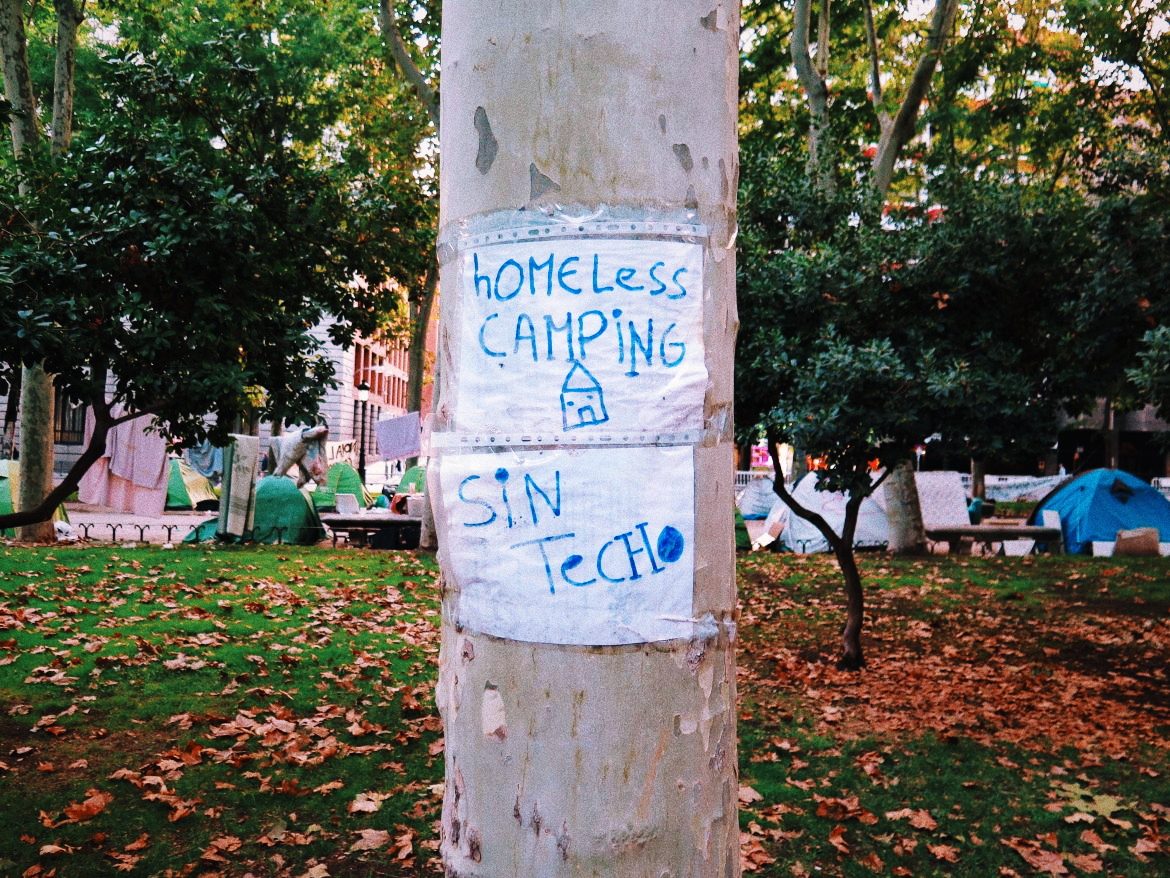 Around 150 people are currently sleeping rough on Paseo del Prado. Since February this year, a homeless community of activists have been camping out on one of Spain’s most prestigious streets. They’ve endured freezing temperatures, heatwaves and downpours in protest for visibility, security and access to affordable housing, and to end all homelessness in Spain.

The entrance of the camp felt like a gateway into a dense forest where a secret community of rebels live. But the reality, of course, is heart breaking.

The location of this homeless camp is key. It stretches most of the length of Paseo del Prado and is visible to six lanes of passing traffic as well as visitors to El Prado and workers of the Ministry of Health, Social Services and Equality. Yet, despite being in plain sight of thousands of people every day, residents of the homeless camp remain invisible to the vast majority of them. 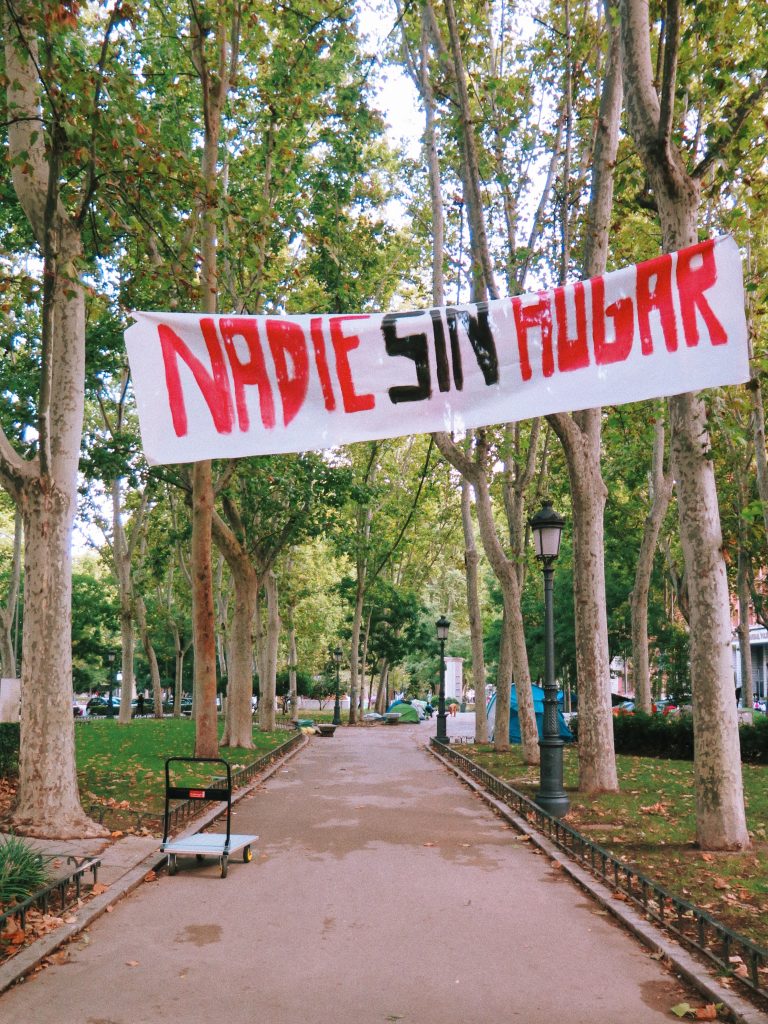 I went into the homeless camp on Monday evening and spent a few hours there, where I met Victor.

Last night was my hardest night.

Victor has been homeless for just one week and is sleeping in one of the iconic green tents along the tree-lined promenade. It’s propped up on pallets, which he found earlier that day.

I won’t make that mistake again. Everything I have is soaking wet now.

All over the camp, shirts, jeans and underwear are hanging from ropes tied between trees, or on clothes horses propped up along the footpath. Blankets are laid out on top of tents, and mattresses are stacked upright to catch the low sun. The night before, it had rained heavily and the homeless camp was drenched. 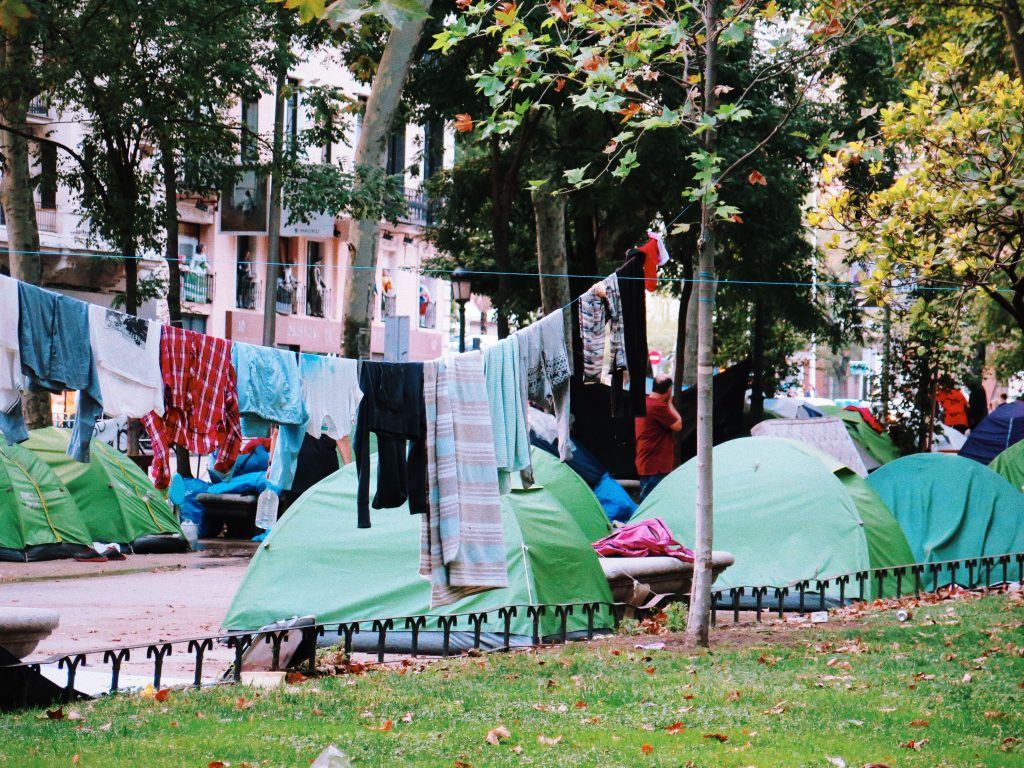 Spirits are low this evening, but I spot many residents pottering. Water from the drinking fountain needs to be collected, food needs to be cooked and the steady protesting must carry on.

Victor is sitting on a turquoise sofa inside a friend’s tent, smoking shisha and drinking a cup of tea… 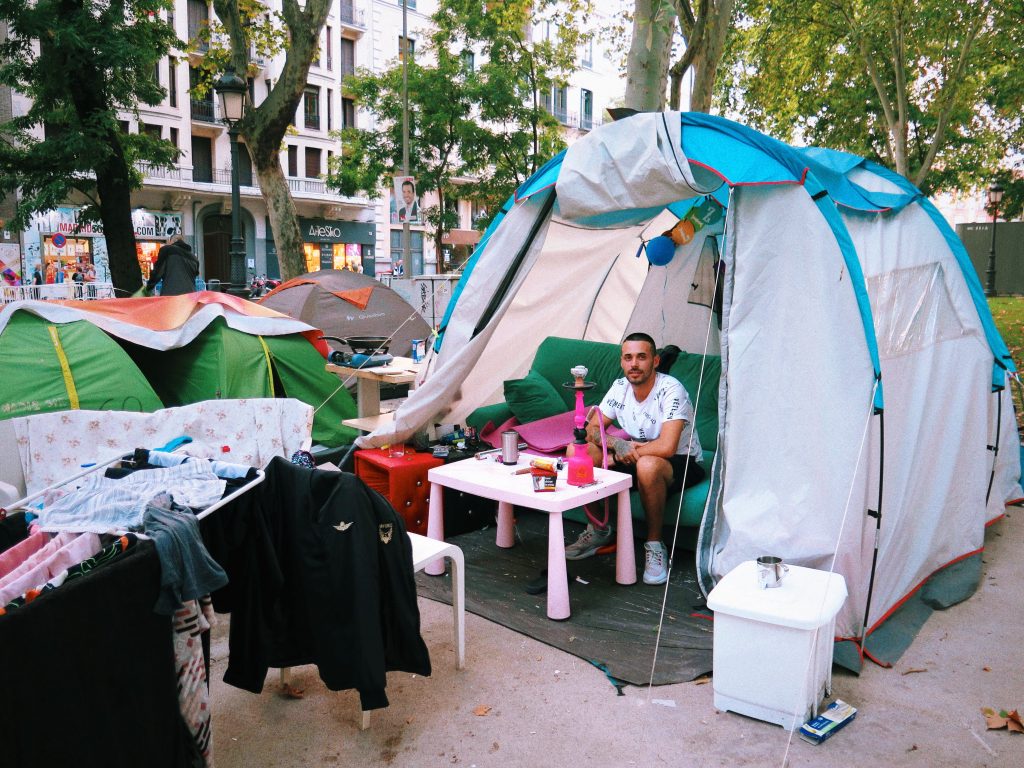 There are fairy lights hanging up inside, and a metre-high pile of clothes stacked up at the back of the tent. By music-festival standards, this is a palace, but what is clear is that the contents of an entire apartment are inside and around the tent: chairs, tables, pots and pans, a desk and home decor.

Other tents are smaller and many belong to longer-term homeless people. One hundred and fifty people with 150 different stories are living side-by-side in this makeshift activist village, and it’s not always easy.

While I was talking to Victor, a fight broke out between a man and a woman next to us. It escalated very quickly and Victor advised me to leave, warning me that this is what it can be like here. Before I left, I asked Victor what he wanted, expecting him to say a home, a job or simply dignity, but he sums them all up perfectly by saying,

I want to be able to look at my watch and think, oh, I’d better get going, I have somewhere to be.

As I walk away, I look back at him and he makes me promise I’ll be back. I tell him “of course”, and see the line of material between him and the drama unfolding next to him, and I know he’s wondering how and how and why the hell he’s here.

Victor moved to Europe from Brazil with Portuguese citizenship. He lost his job working in a bar in Móstoles a few weeks ago and doesn’t have a support network here yet. He would go home and stay with his family, like many would in a tough situation, but his pueblo is an intercontinental flight away and he doesn’t have the money to get there right now. 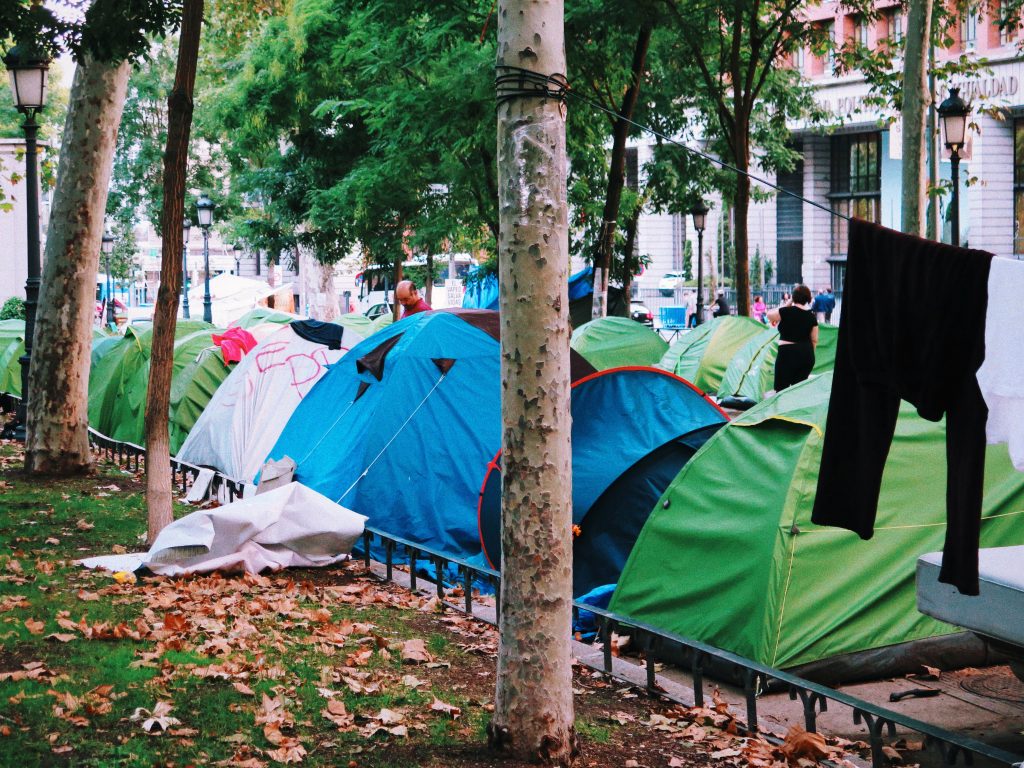 Then I got chatting to Immanuel, who had been homeless for a month. He spoke perfect English – he’d been living in Wales for around 30 years but “lost everything” so came back home. He told me that he’d just moved to in front of Congreso, then suddenly switches to Spanish…

Two nights ago, a guy came into my friend’s tent and I think he was going to rape her. I pulled him out, and then another guy from the camp came and helped me get rid of him. And a few nights ago, someone came at us with a knife. So that’s why I moved here, because maybe it’s safer. We’re out in the open and we’re in front of Congreso, and the police are nearby. 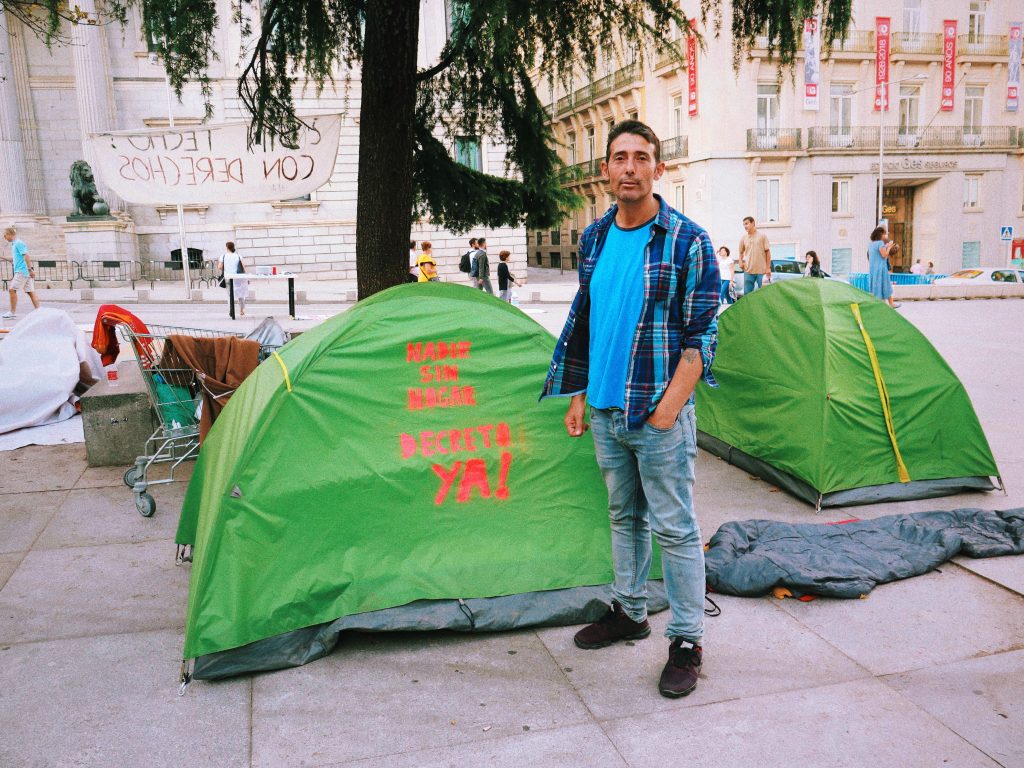 He switched back to English to tell me about the rebellious spirit within the camp, and how this is a community that is coming together over a common cause. But he seems to have no sympathy for himself. He believes it’s his own fault that he’s homeless, but he feels for the others in the camp who “don’t deserve to be here”.

I’m doing this for them. 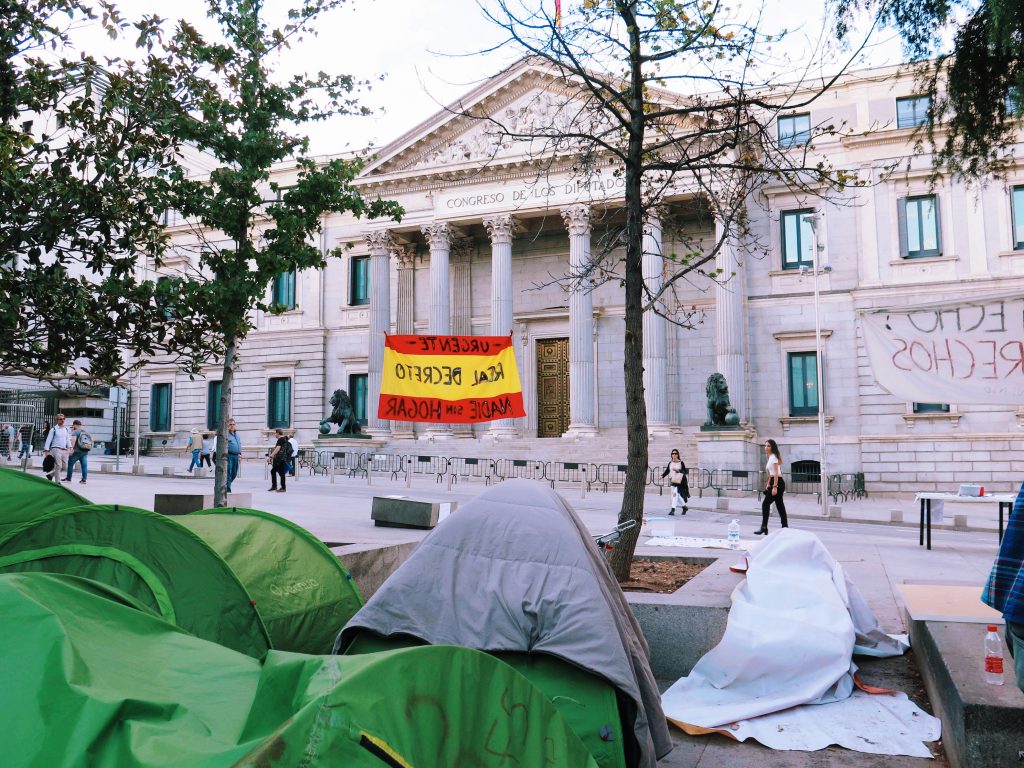 Immanuel is keeping an eye on everyone’s tents while they’re out for the day and I ask him where they are.

A group has gone to buy a gas canister through donations we collected from our activism, a few are in the town hall charging their phones and laptops. Maybe some are out begging or scavenging, I don’t know. I know a few have gone to the Casa de Baños to get washed.

Fortunately, there are still two public bath houses in Madrid. The Casa de Baños in Lavapiés is the nearest to the homeless camp. For just 50 cents, you get access to a toilet, sink and hot shower.

I ask Immanuel if he’s tried using some of Madrid hostels, and he told me that he went there for one night and was scared.

Someone threw a beer bottle and it smashed against the wall. And I saw a lot of drug use. I didn’t want to be dragged into that.

Statistics taken from the Ayuntamiento and Nadie Sin Hogar.

Mohammed (not his real name) is from Algeria. He jumped the fence in Melilla six years ago and still doesn’t have documents. He makes a living by selling second-hand clothes in El Rastro, which he stores in a second tent. He offered to show me around his home, which is where he moved to a month ago from the Cañada Real.

Here’s my kitchen, my chill out space, my bedroom and my closet. I put my shoes over here, and this is where I pray. 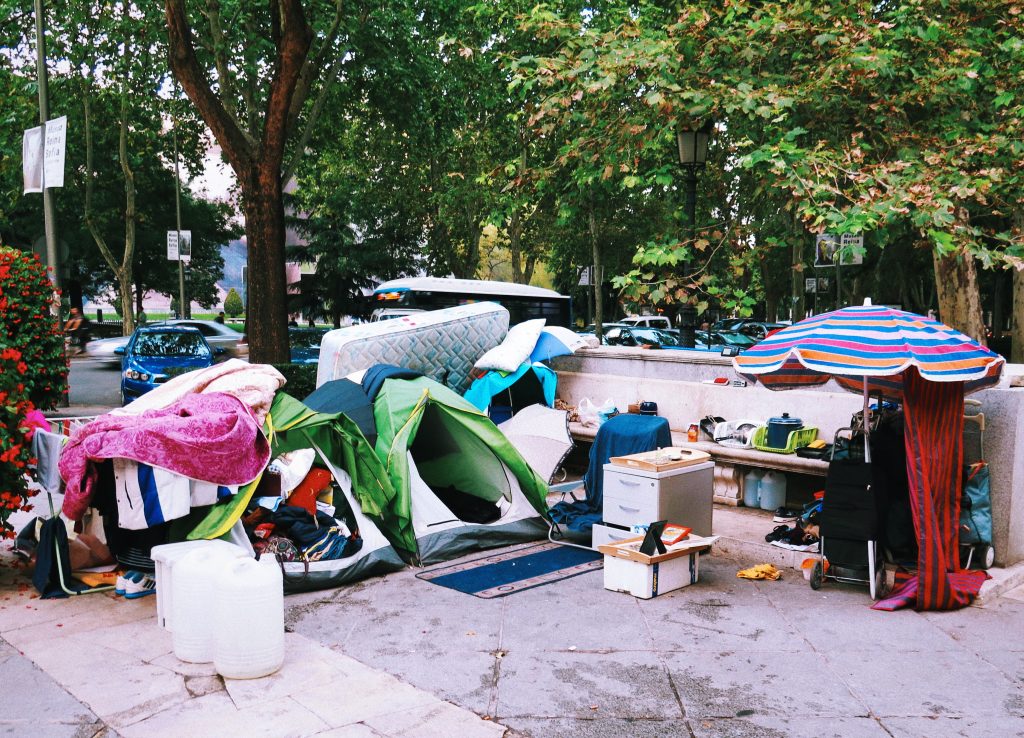 The town hall claims that around just 10% of the residents of the homeless camp are actually homeless. Speaking to the residents there, they believe homeless people make up the majority of the camp’s residents.

WHAT THE NADIE SIN HOGAR MOVEMENT ARE FIGHTING FOR 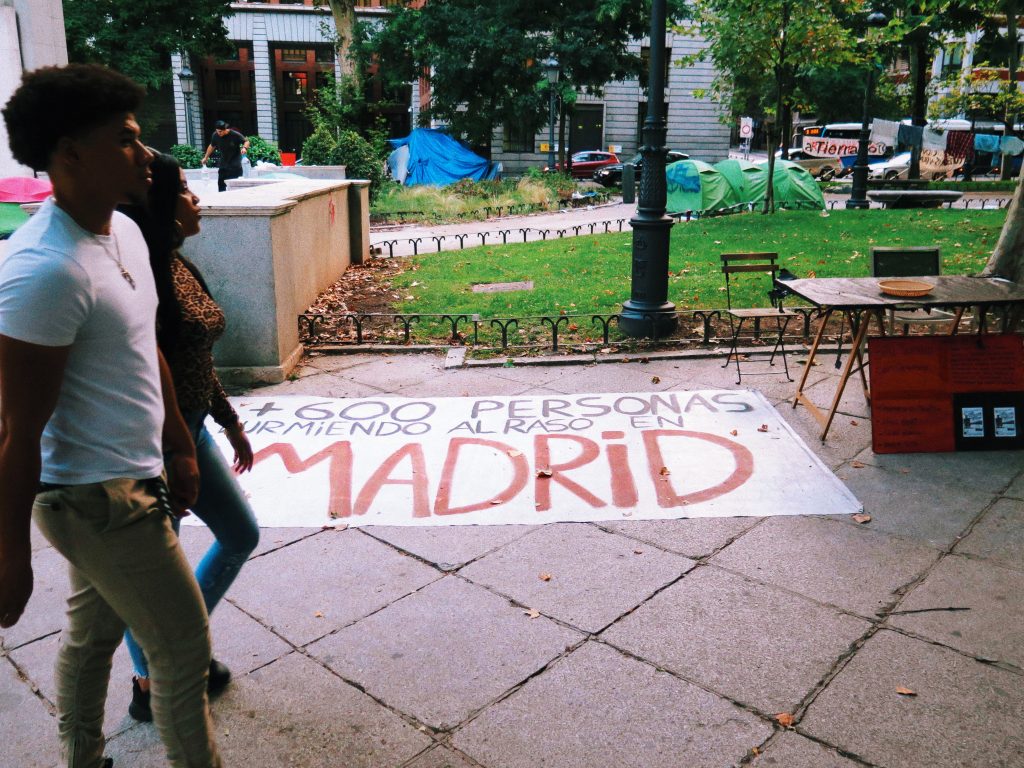 Around 150 camp residents will bed down on Paseo del Prado tonight and will do so every night until they are either housed or forced to leave the promenade. Time is running out for them as new elections approach (*sigh*), and this vulnerable community will undoubtedly be used as a device for political campaigns. As the homeless camp uses all of their physical and mental resources to fight for their rights, it’s not enough – they need our help too…

HOW YOU CAN HELP

Thank you for sharing this compassionate & in depth article. I too came across the encampment and for my short time in Madrid went over to talk with the activist group. I brought fruit and water, as well as my nonjudgmental ears to hear their plight. This was an eye-opener for me and reminded me that travel is more than simply exploring a people and its culture. It’s about connecting with our brothers and sisters and lending a hand. And if nothing else, it’s to offer a smile, a hug, a bit of warmth to another human being. Our circumstances may be different, but we are all children of this Madre Tierre.