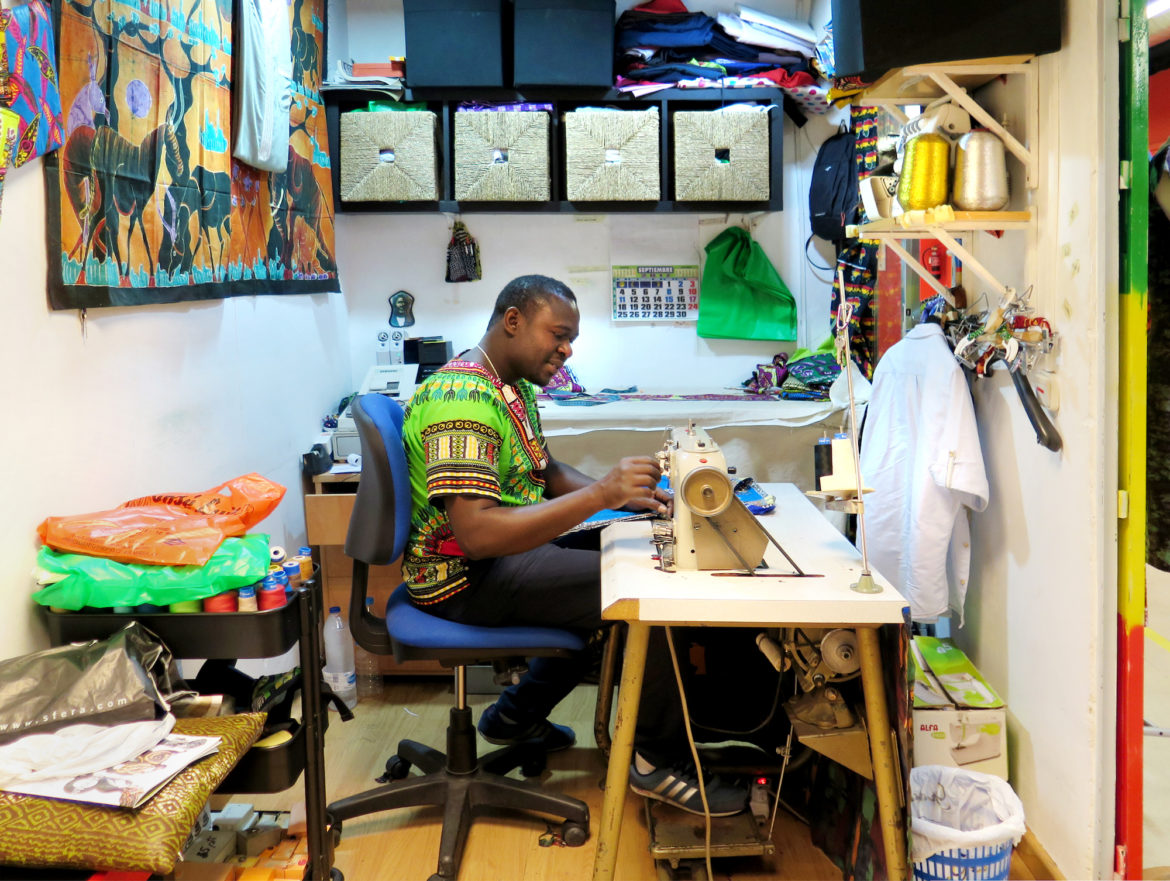 There are two important stories in Laye’s life. One starts at the age of 5, and the other begins around 20 years later when he stepped onto a small boat. The two stories are written below in parallel to highlight the sharp contrast between Laye’s hopeful expectations of Madrid and the unkind reality he faced.

Laye left school at 17, and decided that now was the time to start training as a tailor. He became the apprentice of his grandfather’s friend – a strict and thorough man.

He landed on the Canary Islands.

After finishing his apprenticeship and getting his licence to sew, Laye set up his very own shop in Senegal, which he still owns. His life was normal; he was earning a good living and was even able to employ people.

He was detained in an immigration centre for six weeks.

Some friends of Laye’s – tailors who he’d done his apprenticeship with and grown up alongside – had heard a rumour that life in Spain was good.

He arrived in mainland Spain and travelled to Madrid to join his uncle – the owner of Baobab.

Apparently, you could earn twice as much in Spain as you could in Senegal.

He made a living on the streets selling fake CDs and DVDs.

They said that everyone was rich and there were no poor people living on the streets.

The police came and took everything.

Life was hard in Madrid and nothing like what Laye had expected. He wanted to give up on everything and go home, but his uncle told him that this was all normal and that he had to stay strong because things would get easier.

Laye managed to find work, albeit off-the-books. His friend got him in with a leather factory, where he made clothing, garment lining and, ironically, leather covers for police batons.

Laye gradually learned Spanish and was eventually granted permanent residence in Spain. With his savings from the leather factory and his new-found rights, he opened up his own tailor shop in Mercado San Fernando. It’s in a small, quiet corner of the market just behind La Casquería. 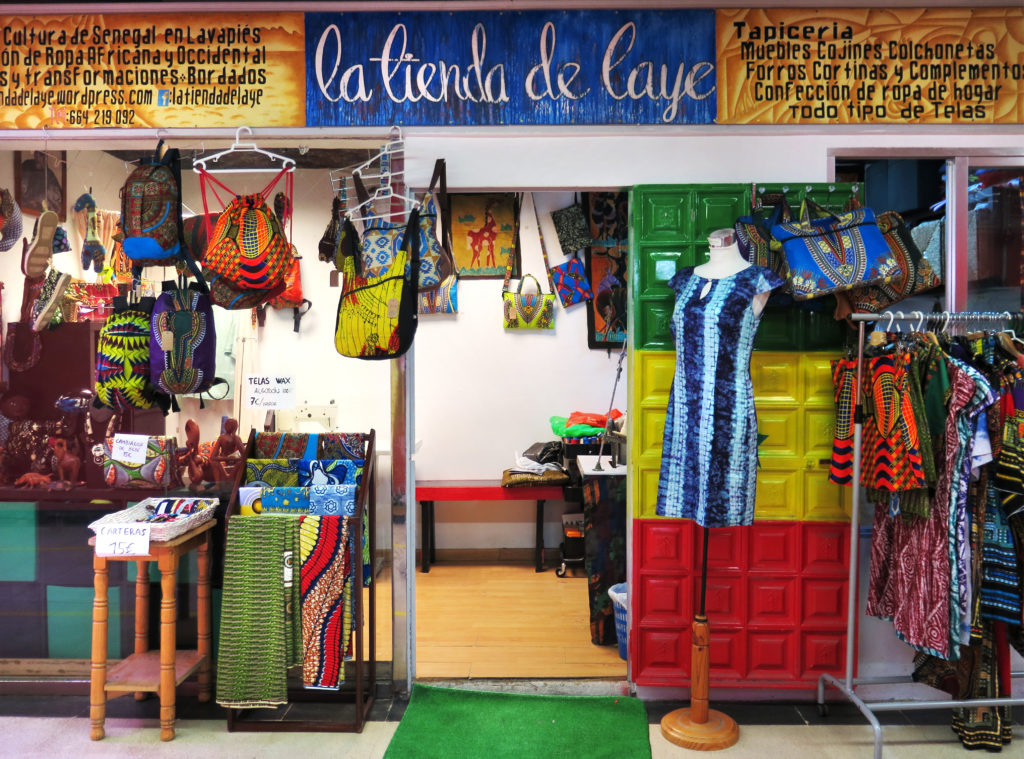 Laye is a gregarious fellow, keen to chat to passers-by in fluent Spanish, and he seems to know everyone. A boy, perhaps no more than 3 years old, cycles towards us on his tiny bicycle and parks outside Laye’s shop. Laye asks him about his holiday in Italy, and his Italian grandfather answers while the boy excitedly rummages through the handmade toys in the shop window.

Laye still wants to return to Senegal. It’s his home. He misses his family, his culture, the dancing, and the happiness he remembers. He talks animatedly about his family’s home, which he still goes to visit. “Are you happy here, Laye?” I ask.

He then puts his foot to the sewing machine pedal and places his hands on the ocean blue garment he’s currently working on. His posture sinks. In Spain, he carries the burden of the label “immigrant” on his shoulders, but in Senegal, in spite of everything else, he’s free. 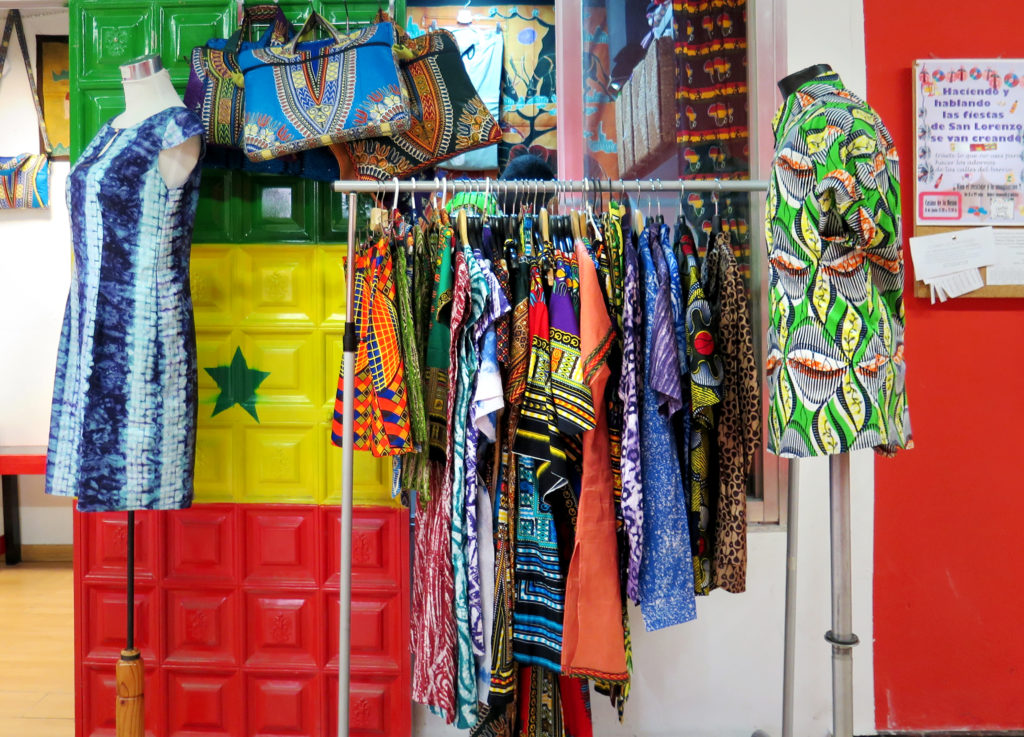 LAYE’S STORY IS JUST ONE OF MANY IN MADRID

Every black man you see with a big white bag of knock-off merchandise slung over their shoulder, running from the police may have spent 11 days at sea like Laye. Or perhaps they’re still struggling to find their feet in Madrid, such as Moha, who speaks about his Madrid life in this  interview.

These men don’t want to be living like this – they want to put their skills and strengths to use and contribute to society, just like everyone else. They might currently be doing the only thing they can to stop themselves from slipping through the cracks and ending up homeless like so many others you see sleeping under the shelter on Plaza Arturo Barea.

What can we do to help? Simply being aware of the problem is huge. Talk about it. Tell your friends about it. Teach your students about it. Help people understand that these people have a story just like Laye, and then change can start to happen.

Inspiring and innovative organisation Madrid for Refugees is grafting hard to help new immigrants set up their life here. They’ve already helped many refugees find homes and work, enabling people just like Laye to completely support themselves and even others.

Laye tailor-makes West African garments identical to those you would find in his home town, MBour in Senegal. He also makes bags, toys and shoes, and is skilled in furniture upholstery. His attention to detail is impressive. Pay Laye a visit – he loves a good natter.

How a starry-eyed rumour of a better life brought this young Senegalese tailor to Madrid was last modified: January 10th, 2019 by Madrid No Frills
Share:
Previous Post

I love the pants I had made while there visiting my daughter in Madrid. The quality and workmanship are spectacular!! And Laye makes you feel you’ve known him forever! Such a treat! I recommend his shop all over the world. If you’re in Spain, you must stop by this shop.