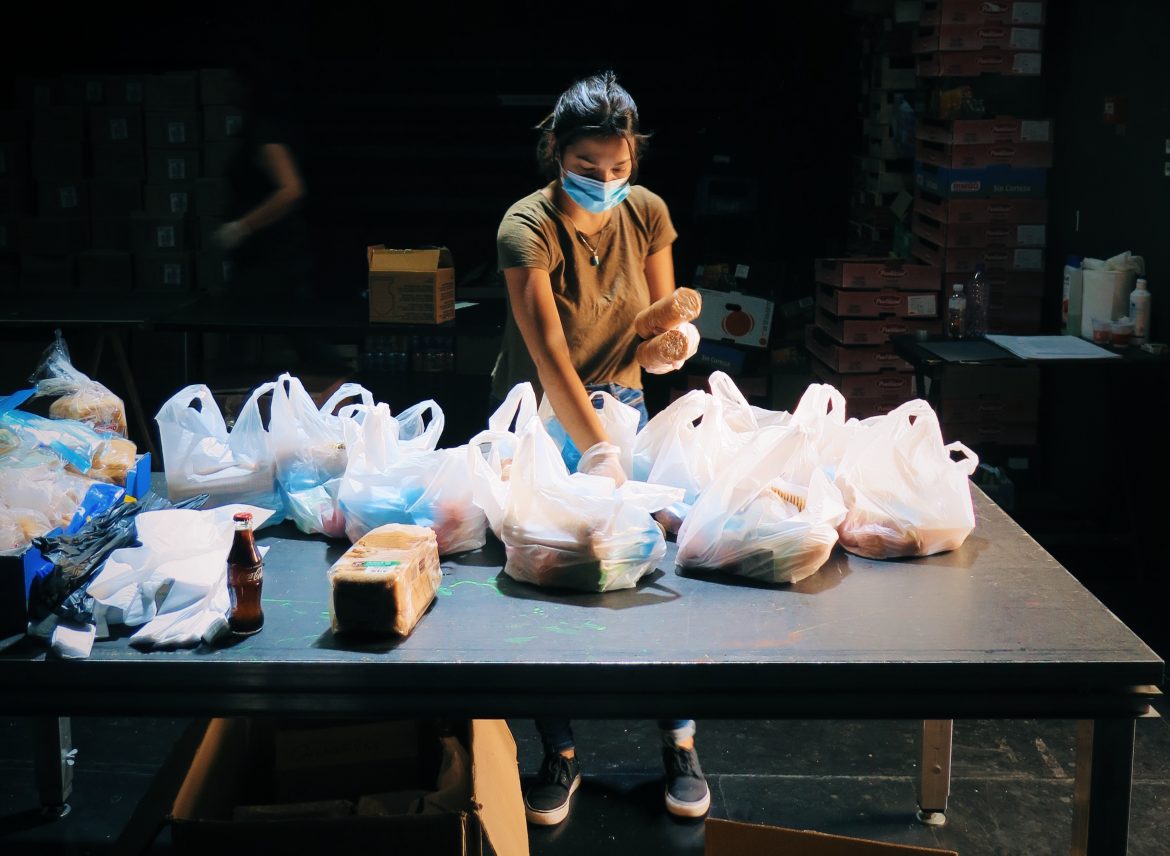 The same spotlights that once shone bright on the faces of Madrid’s rising stars now illuminate food parcels for victims of Lavapiés’ Covid-19 crisis.

Remember the Dragon heroes of Lavapiés? Plataforma La CuBa is their little sister, who grew up quickly under the wings of Dragones de Lavapiés – one of the first associations to set up a food bank under lockdown. Jorge Bolaños and his team of mothers whose children play in the Dragones de Lavapiés football club came together while the daily death toll hovered around the 900 mark and no one really knew if feeding the invisible would land them with a fine. 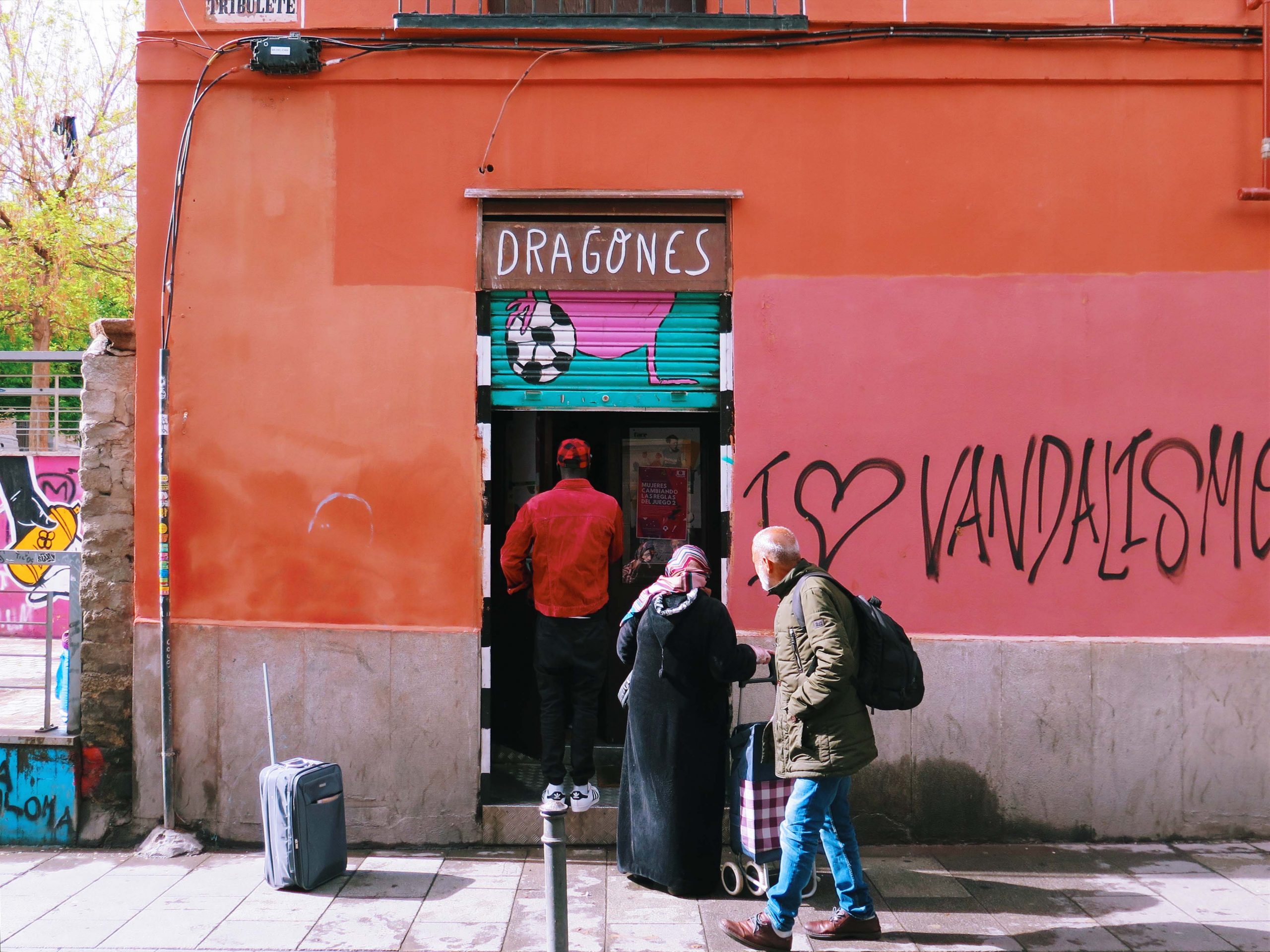 But word got around of the Dragons’ work and they quickly found themselves too small to keep up with both the demand and the help and donations offered, so they began looking for a bigger space.

Last week, I received a message on Instagram from long-time follower Caroline Bekaert, a Belgian volunteer at La CuBa and longterm resident of Lavapiés.

You know about La CuBa, right?

A few days later, Caroline and I are walking up the steep hill of Calle Zurita on our way to Teatro del Barrio. 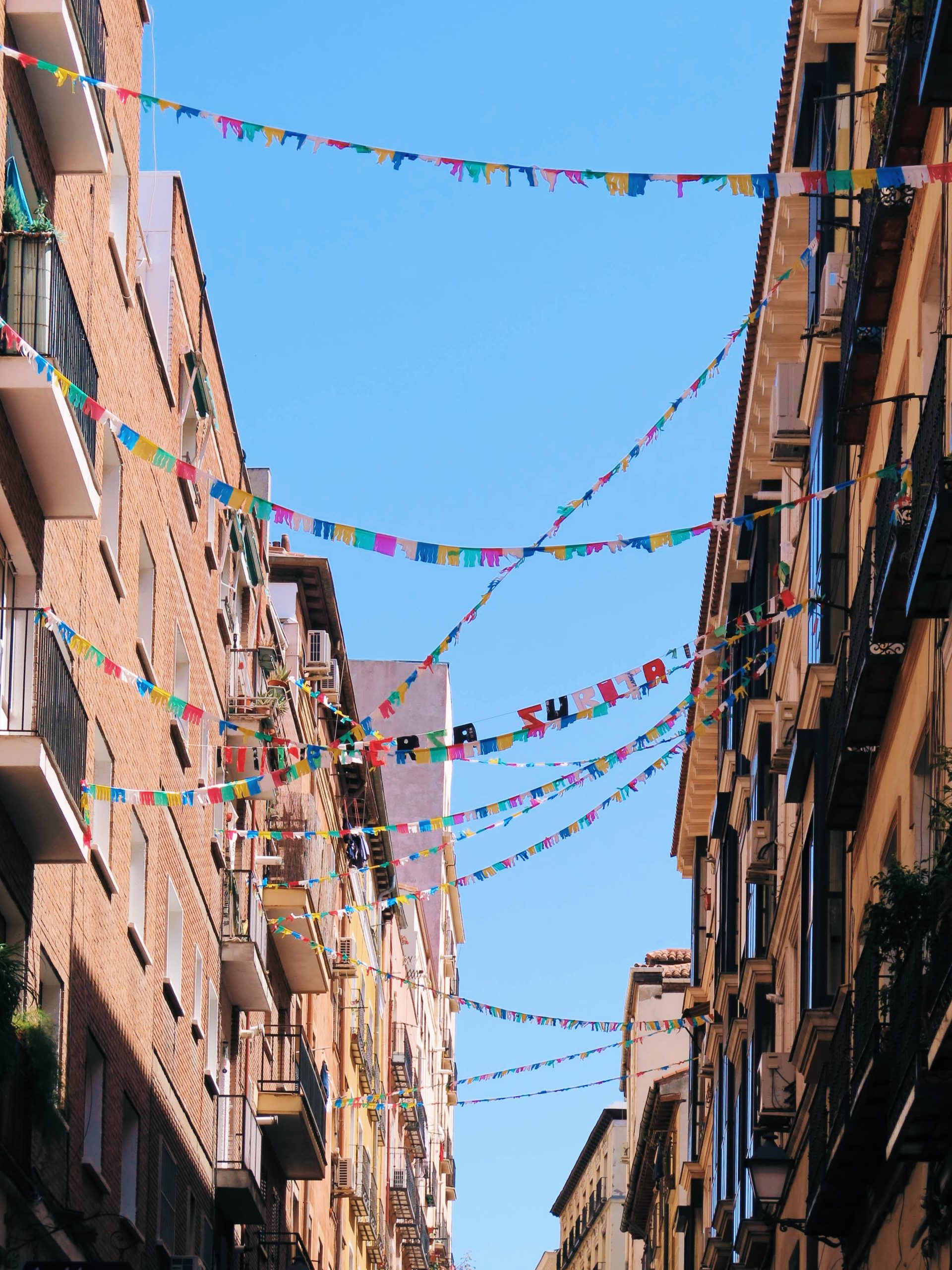 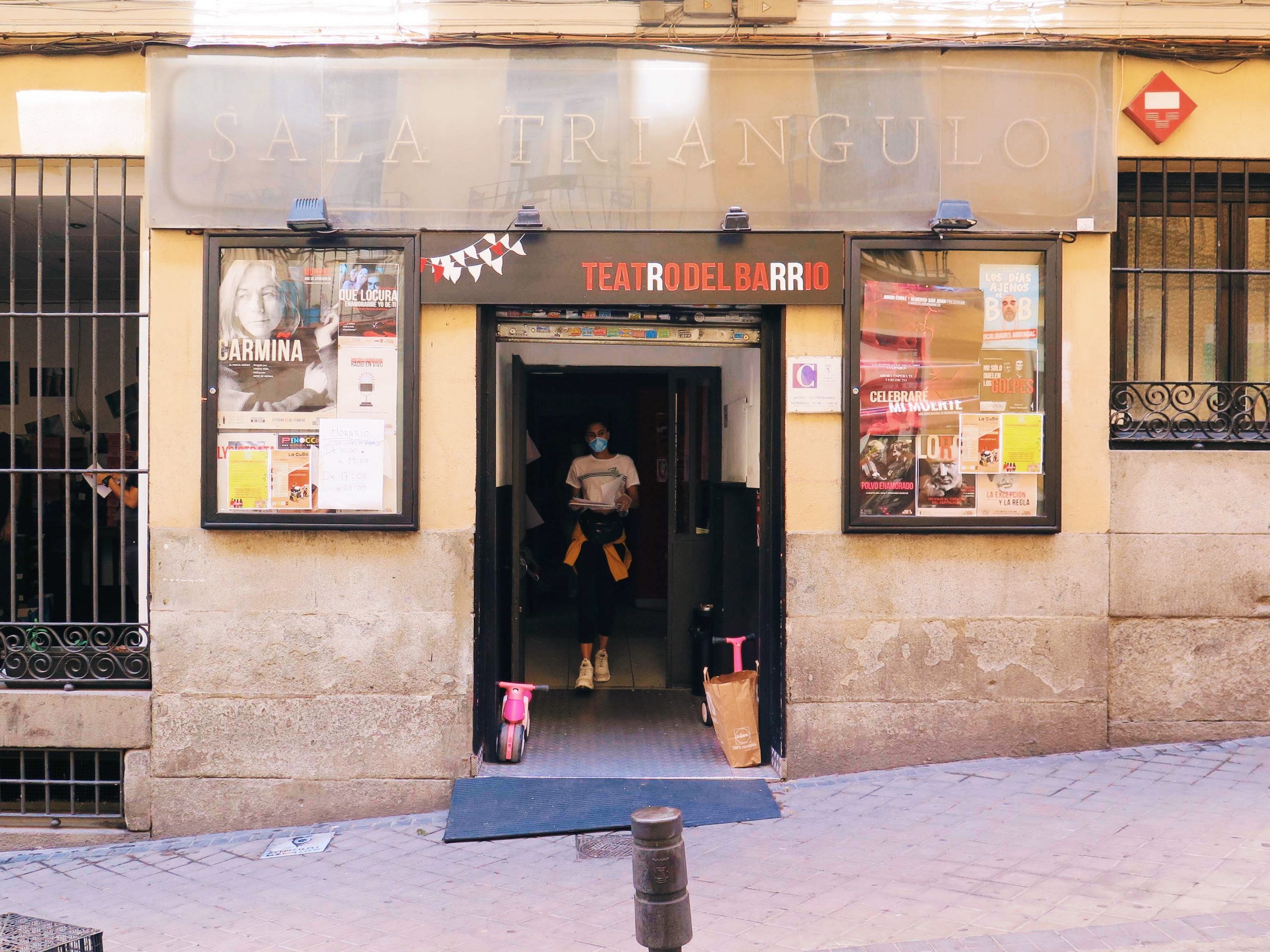 We head inside and I’m met with a dozen volunteers all wearing masks and gloves as they elegantly dance around the room packing food and hygiene boxes. They’re efficiencient and driven – they have a lot of demand and every minute counts. 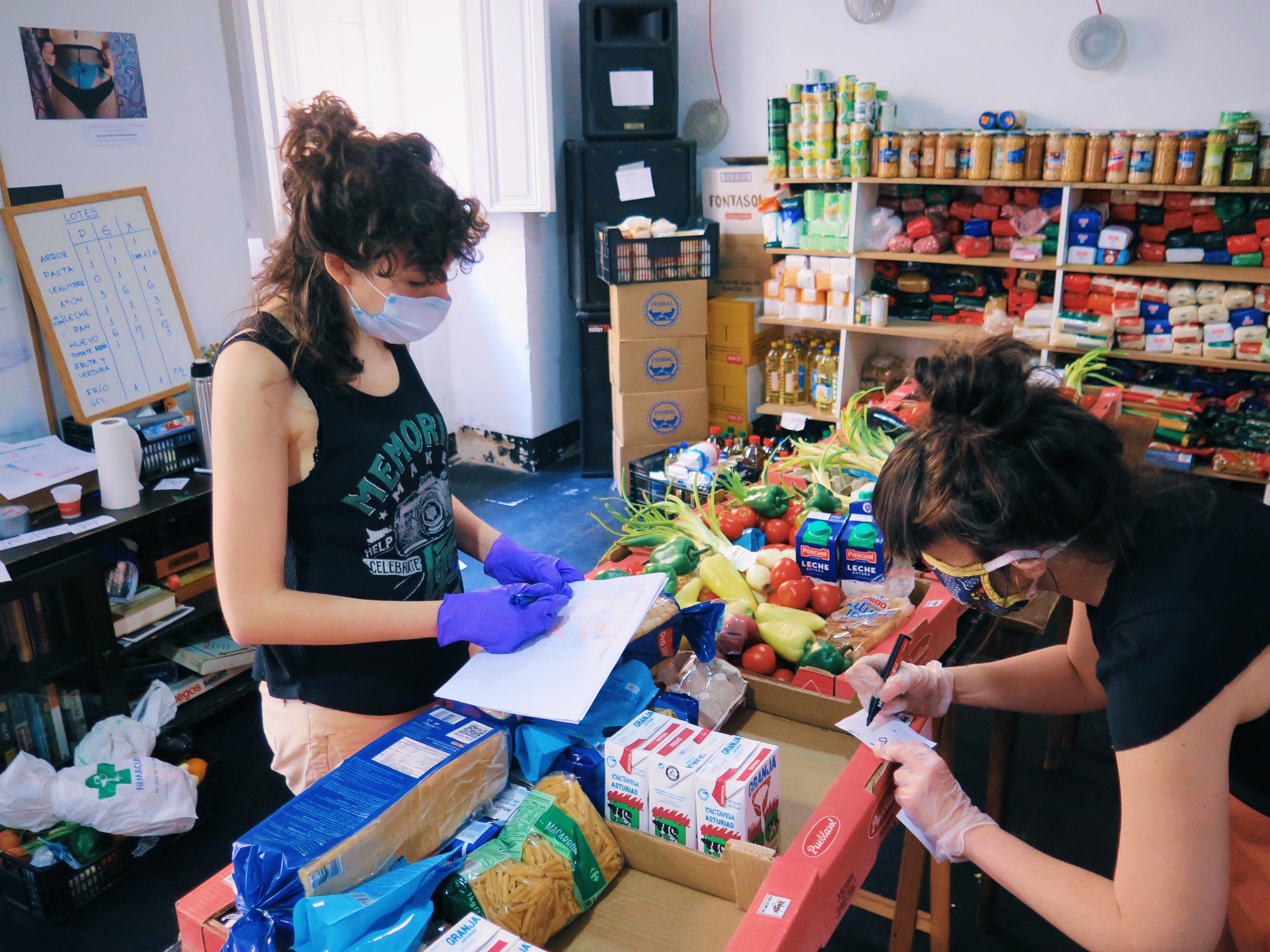 Flaqui, on the left, who is in coordinating today’s food parcels and distribution

Set up just weeks ago, La CuBa are already able to provide food to around 3,000 people. Donations come from many sources: from individuals bringing in tins of tuna and soap all the way to vans full of food from green grocers, bulk food stores, supermarkets and restaurants with surplus food.

Dragones also brings over whatever they don’t have room for, which has so far amounted to around 900kg of food. Even hotels, who donate shampoo, toothbrushes, slippers are coming with anything they can give. People also donate money, which the volunteers use to keep their stock above demand.

The salon is now where supplies are stored. 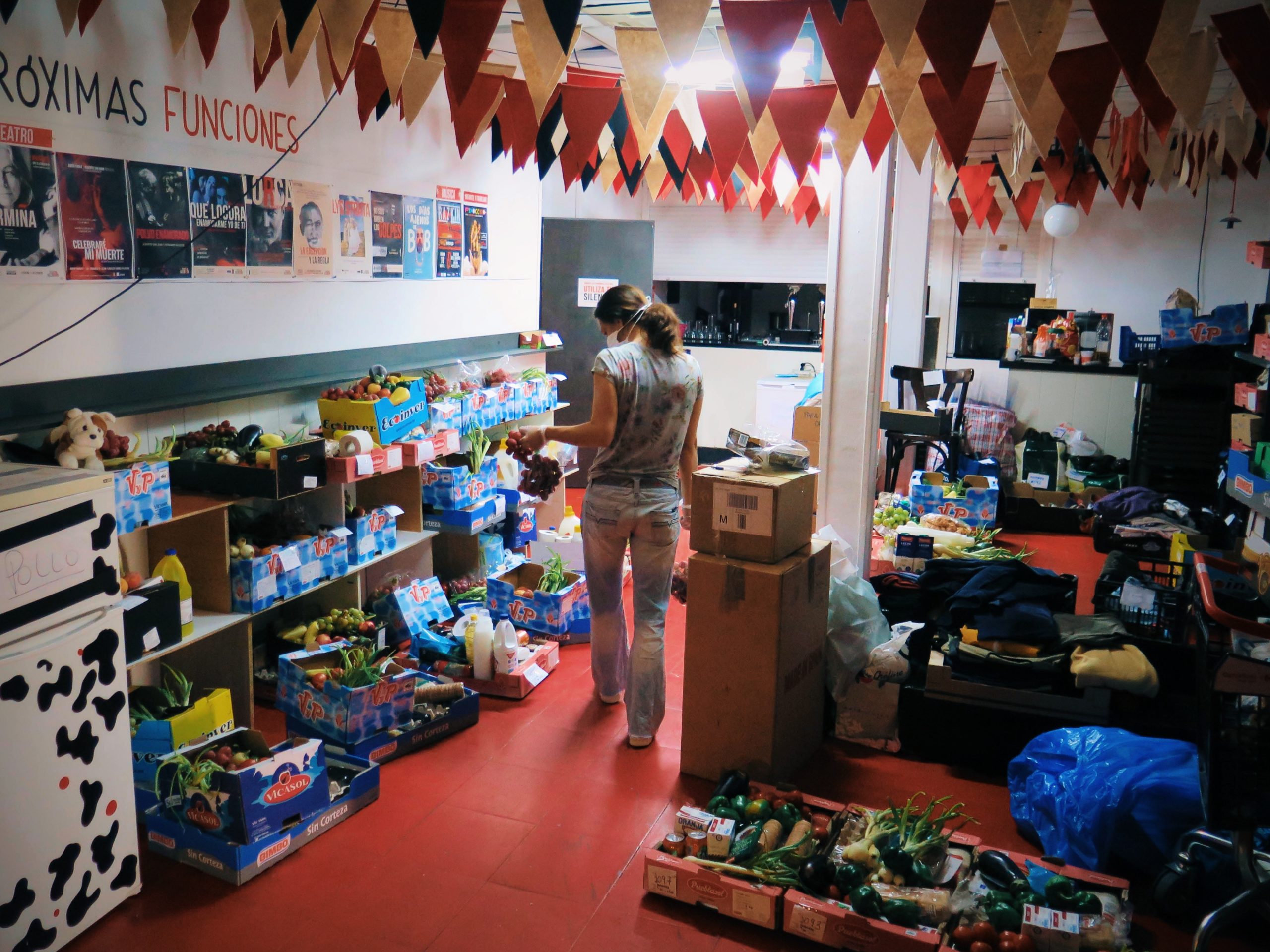 The bar area is where food parcels are packed. 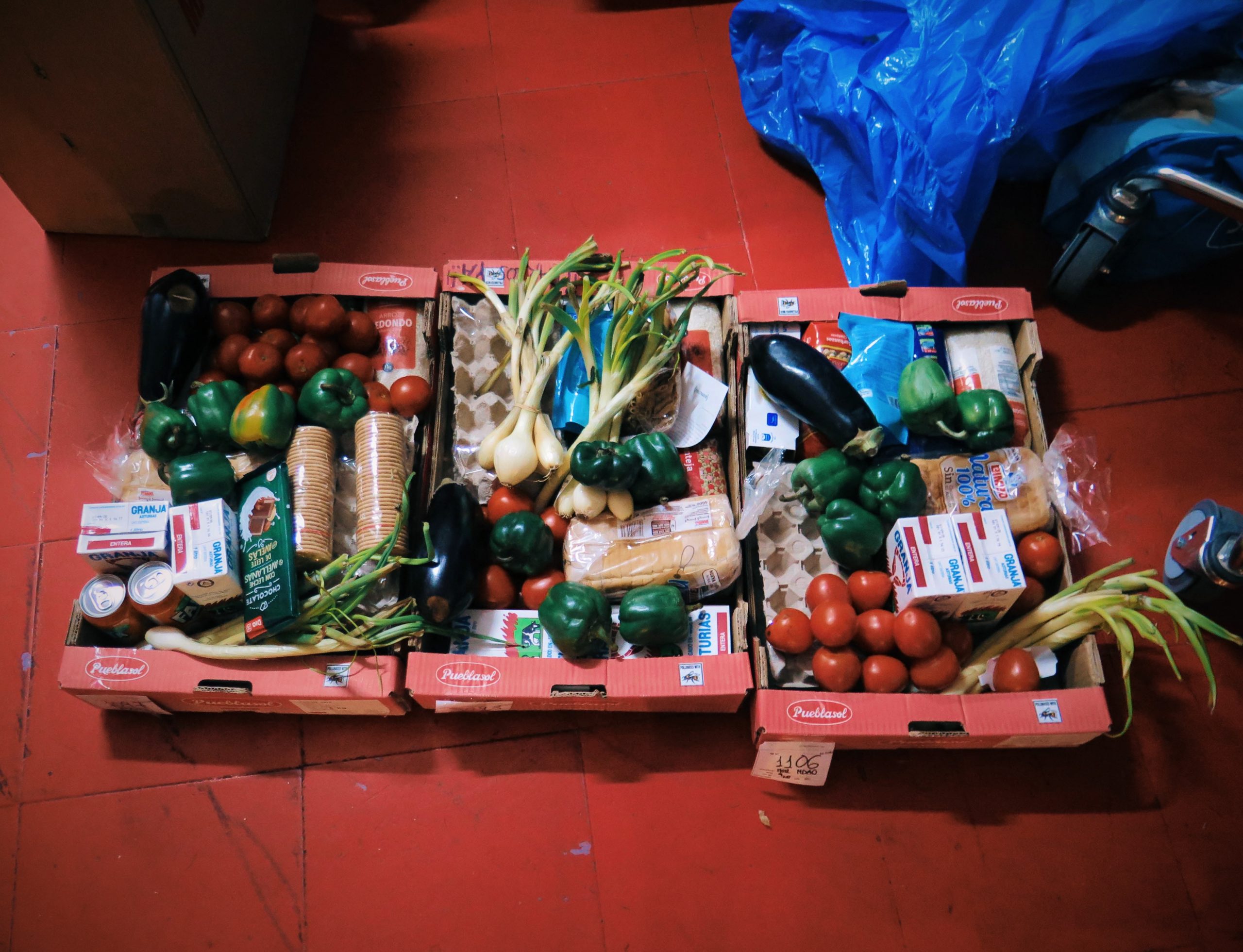 For every additional day the State of Emergency continues, more people turn to a food bank for the first time in their lives. People who had been living in precarious employment situations before the crisis have now crossed the breadline into poverty and either aren’t receiving the help they need, or aren’t entitled to help at all. 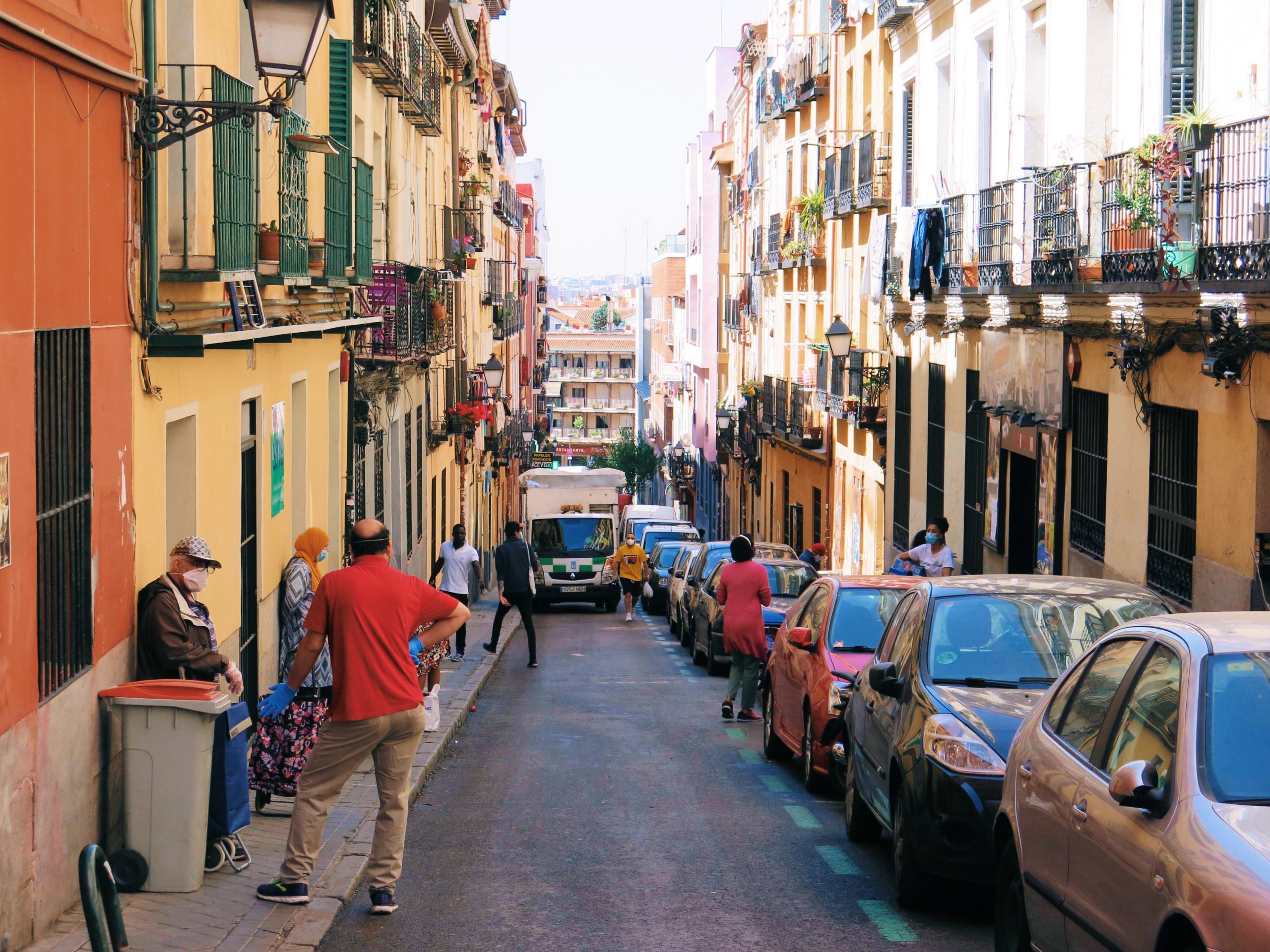 Women and men of all ages and nationalities begin queuing up on the opposite side of the street, two meters apart, waiting patiently to collect their weekly food parcels. Homeless people also wait patiently for breakfast, including one man who the team have gotten to know well.

You know the man that is always in front of Carrefour asking for money? A week and a half ago I passed by and asked him if he new about the existence of the theatre. He said he didn’t know about it so I brought him there and from then on he’s come everyday.

… explained Caroline. But his story goes back further.

He came to Madrid from Romania four months ago, trafficked by a sort of mafia with the idea of working as a painter and decorator here. He took a plane and was robbed in the airport – they took his money, documents and phone.

A group of women, who work alongside La CuBa distributing meals to Madrid’s rough sleepers, are trying to get him on a plane back to Romania this weekend coming, to rejoin his young family.

But not everyone can access this level of help. The limitations of donations and volunteers means that La CuBa is only able to serve people who live in Lavapiés, and this number is higher than many other neighbourhoods in Madrid – Lavapiés is one of the poorest neighbourhoods in Spain. On the register, La CuBa have close to 2,500 residents and 400 homeless people. Most days, they serve 150 homeless people a substantial breakfast, and one hot meal made by the staff at La Lorenza. 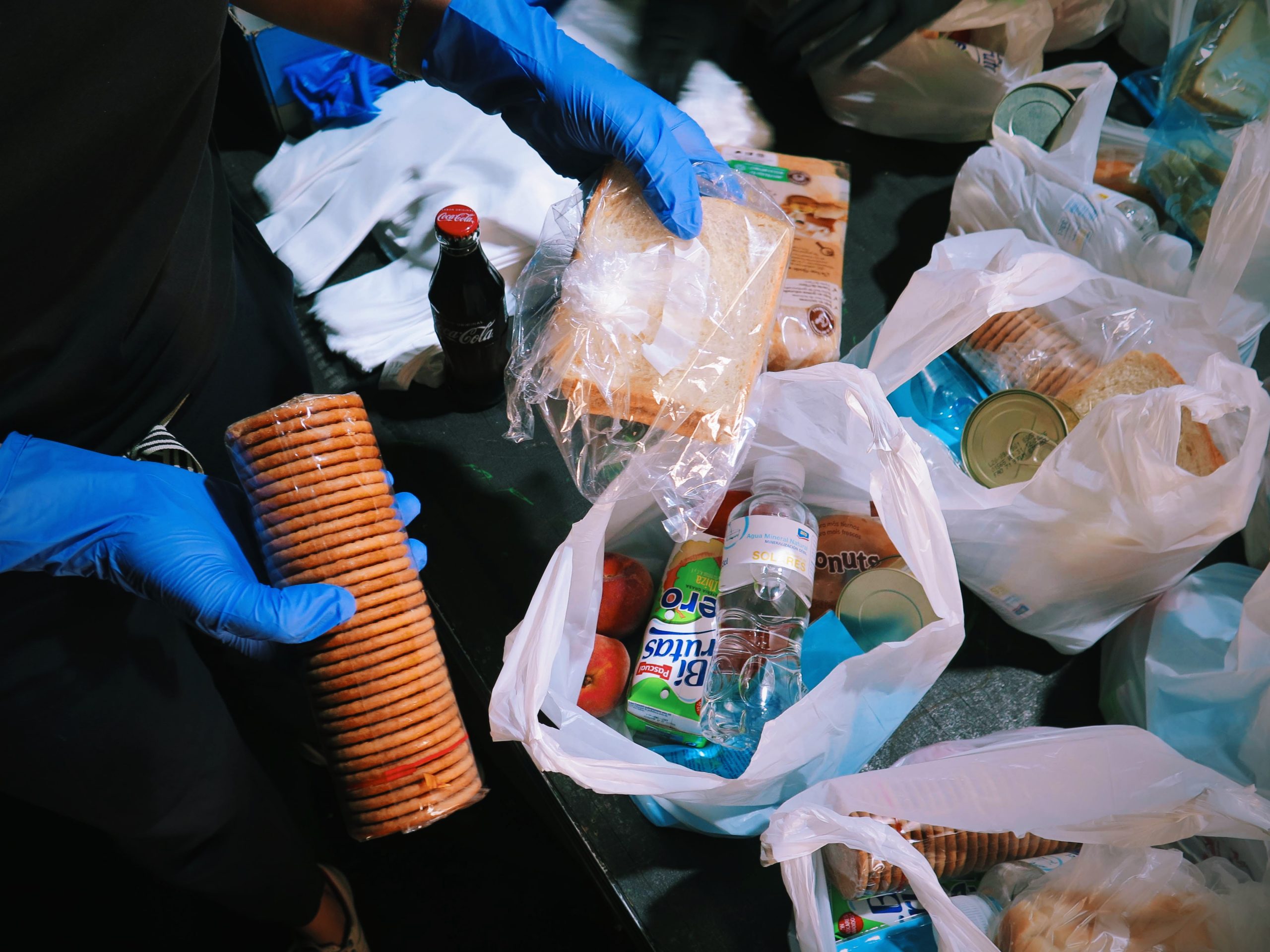 Breakfast of bread, tuna, biscuits, fruit, fruit juice, a pastry and a bottle of water. 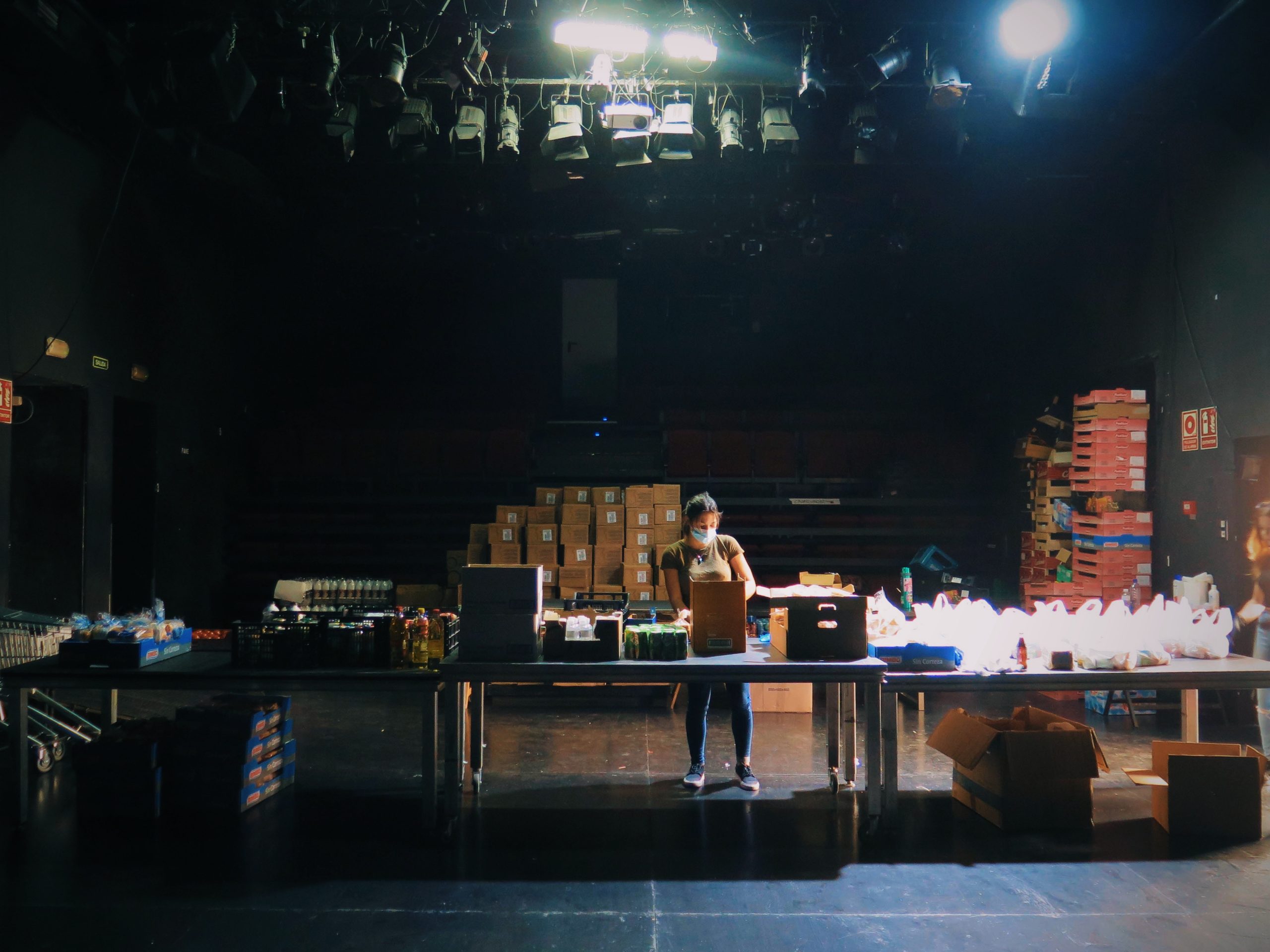 The stage is now the breakfast packing area. 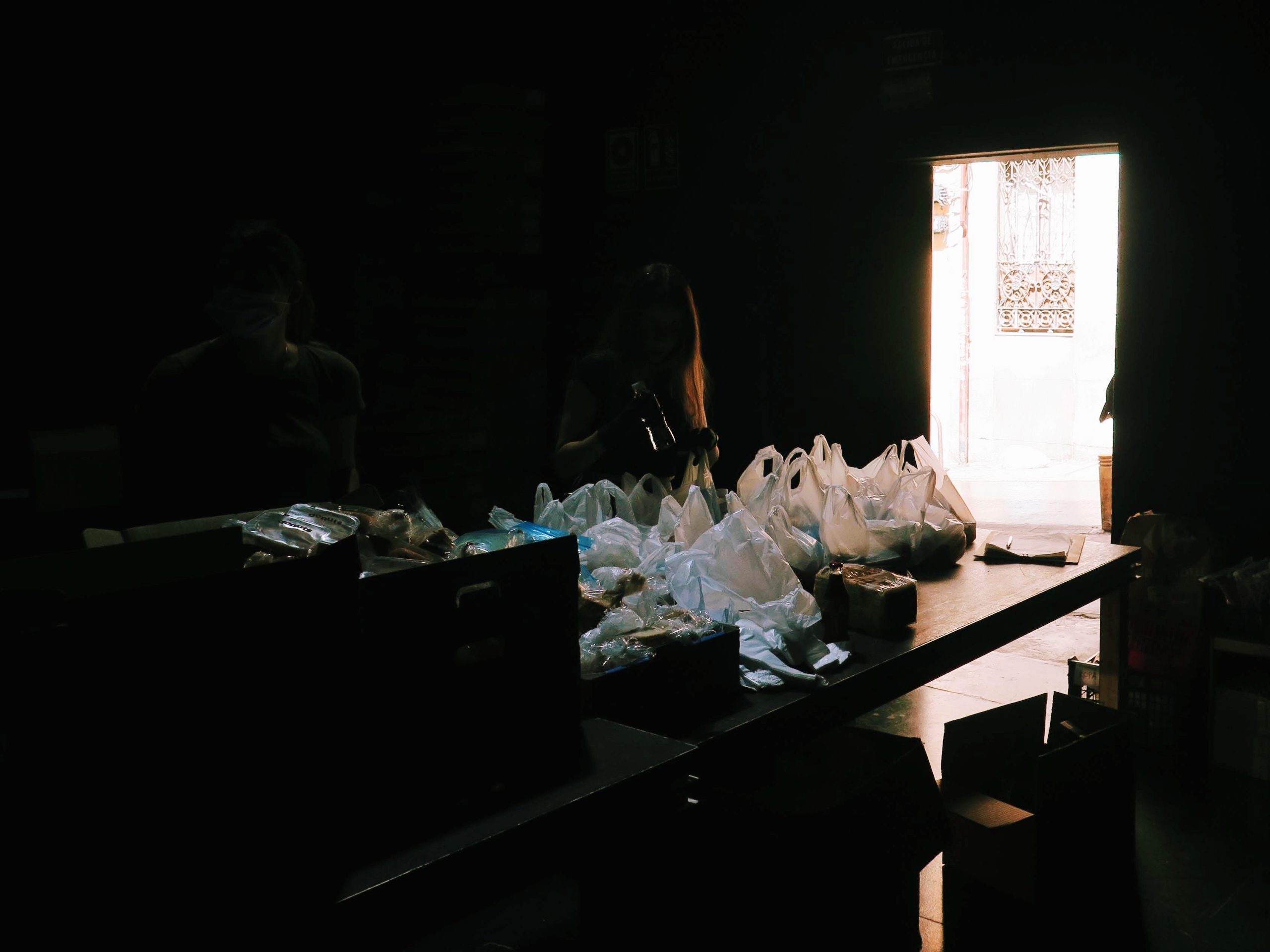 Homeless people wait outside the stage entrance for their breakfast.

Caroline and I walked round the corner from Teatro del Barrio to La Lorenza, a moderno bar and restaurant whose pretty tiles and zinc bar are remnants from its late no-frills grandfather, El Lorenzo. 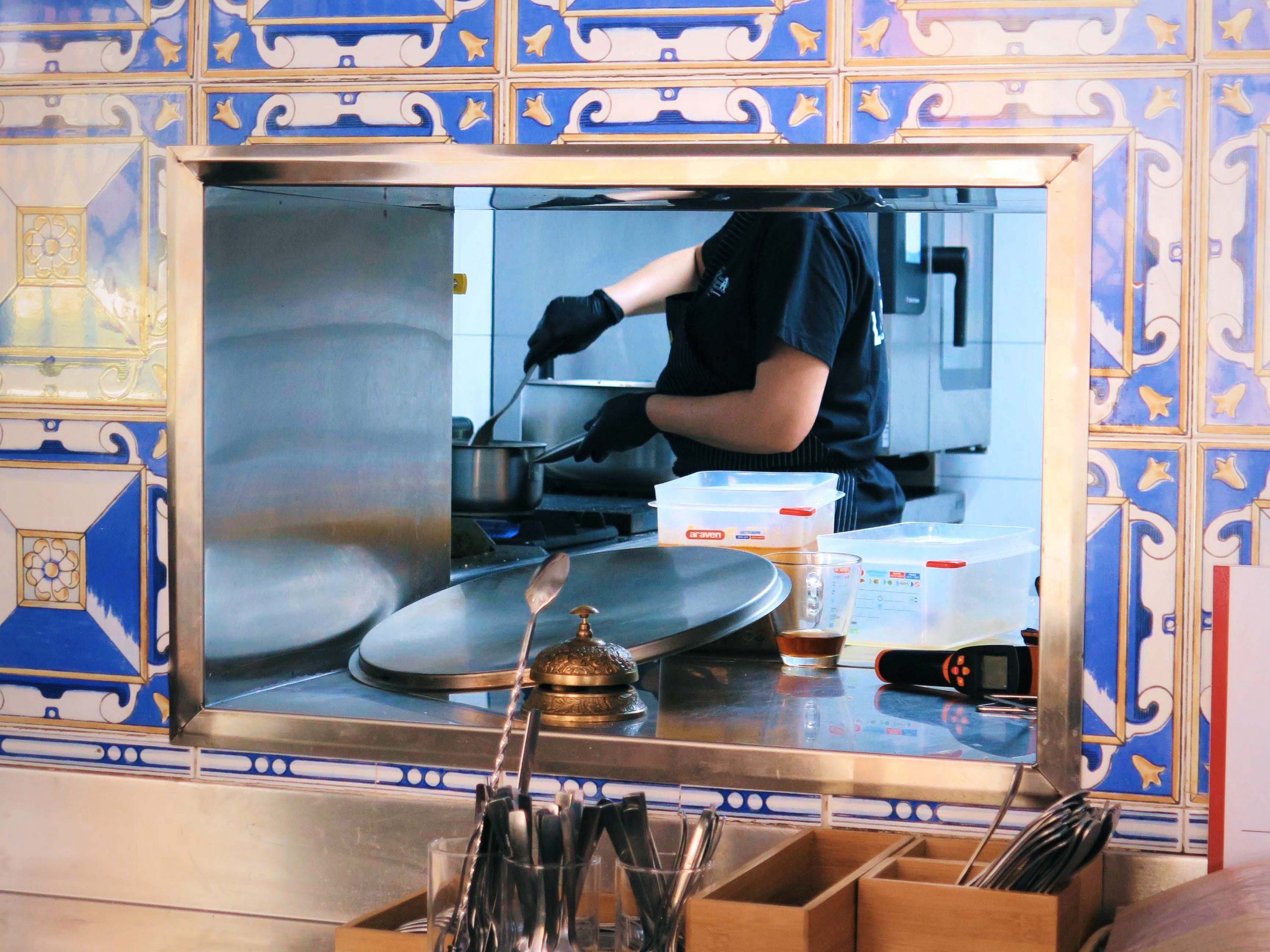 La Lorenza are fortunate enough to have the resources to reopen their kitchen to make hot meals, with staff happy to volunteer to cook, serve and pack. 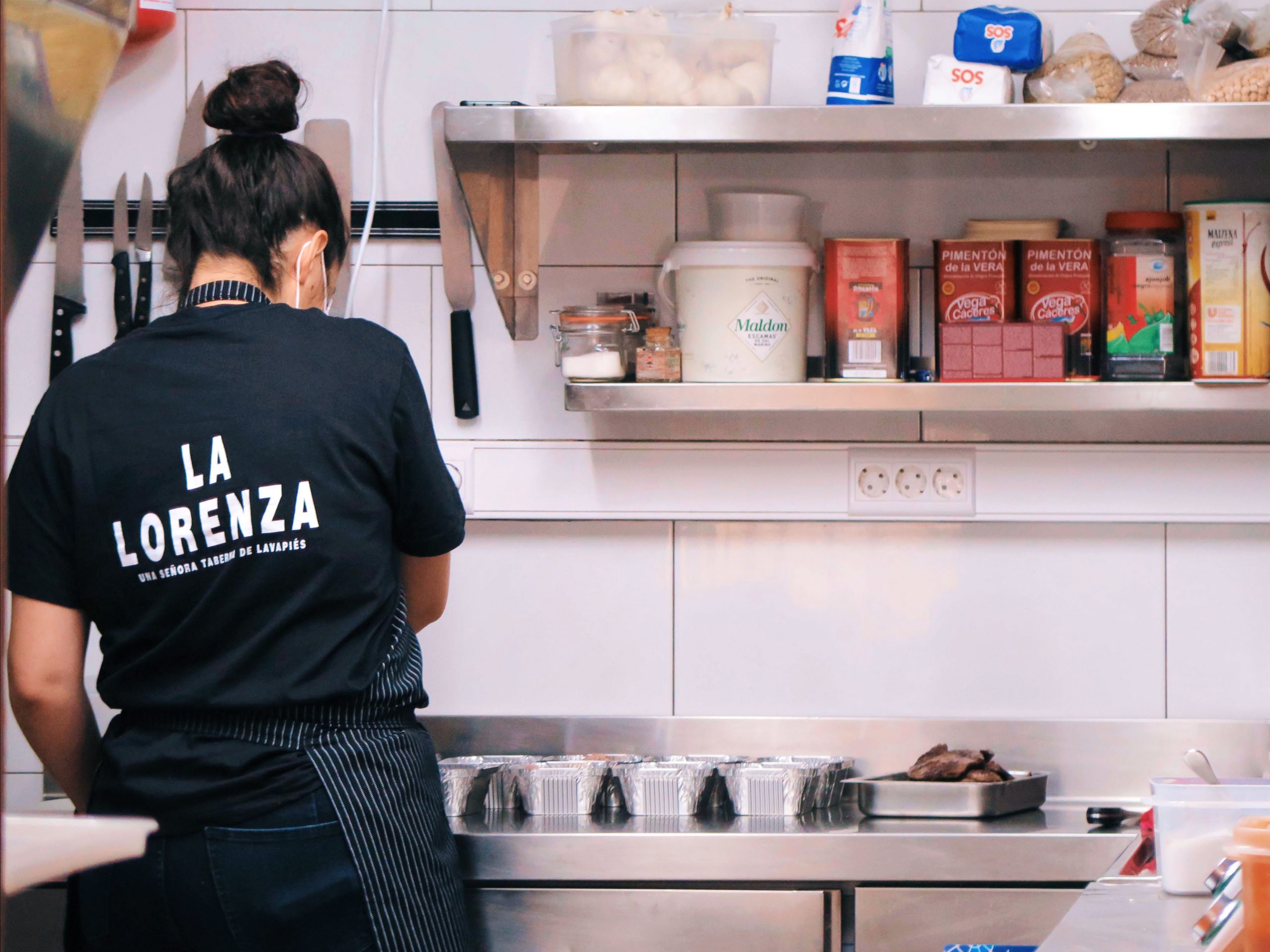 Their ingredients are donated by shoppers of Mercado Anton Martín, and their takeout tubs and cartons were donated by IFEMA following the closure of the emergency Covid-19 field hospital. 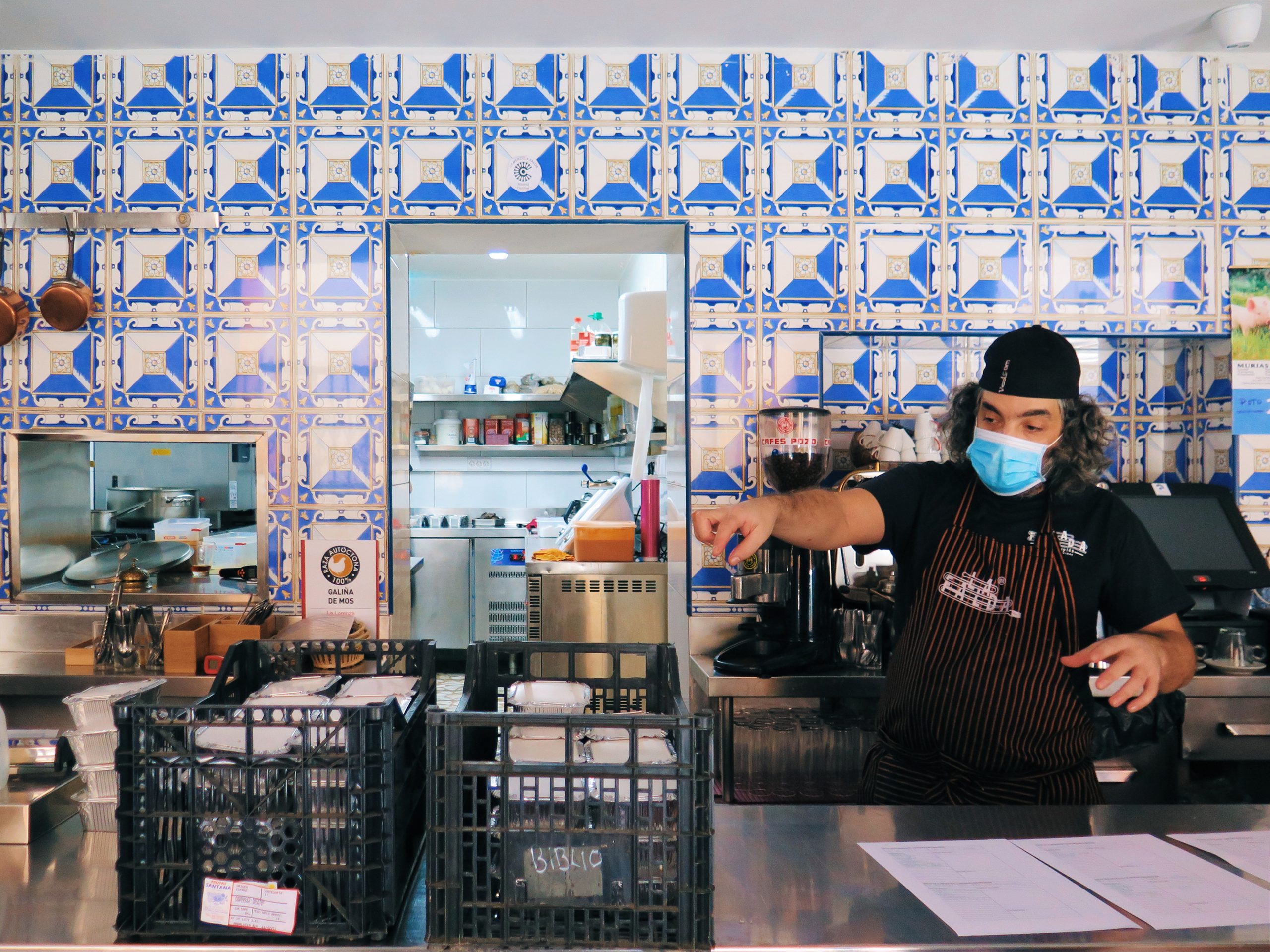 The food prepared in the kitchen of La Lorenza is then picked up by volunteers from La CuBa and walked back to the theatre, where it’s handed out to homeless people for lunch and dinner. 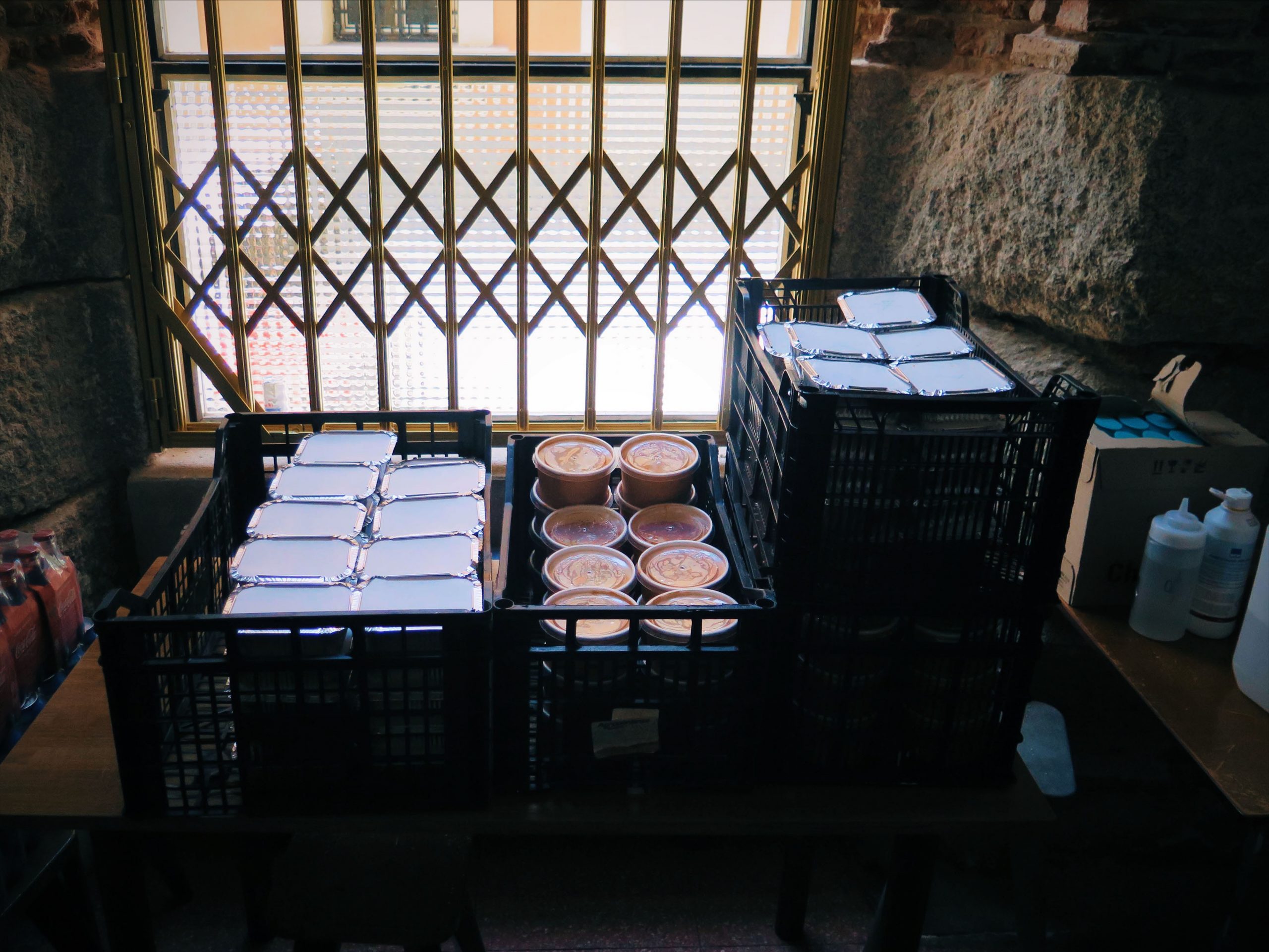 ♫ Everything I give you all comes back to me ♫

Perhaps if the regional government understood Madonna’s words of wisdom, local volunteers wouldn’t need to pick up their slack. But La CuBa would still exist, because that spirit of pulling together already pumps through Lavapiés’ veins.

The reason that this impressive operation was able to get underway so quickly is because everyone involved was already in position. Actors, accountants, technicians, lawyers, teachers and chefs all busy fighting for our rights to affordable housing, equality and freedom of expression simply realigned themselves for the Covid-19 pandemic.

When Flaqui joined La CuBa, she did so knowing that relief efforts could continue for not just weeks or months, but years.

I don’t know how long we’ll be doing this for, but I’ll be here, and so will my family of volunteers. 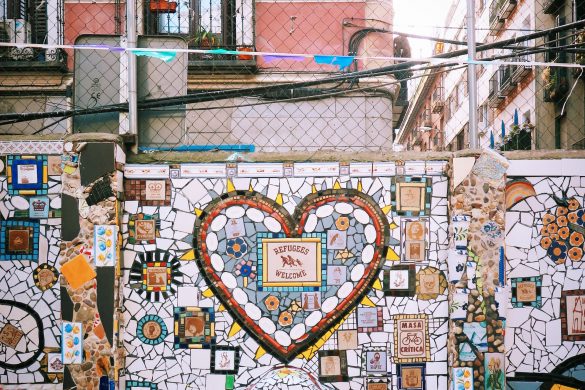 “Why don’t people just get a shovel and clear

Today, the mayor of Madrid asked for the city to b

In love with @bobby.quinones' painting of my photo

My 'Snowy Cava Baja' print is now available to buy