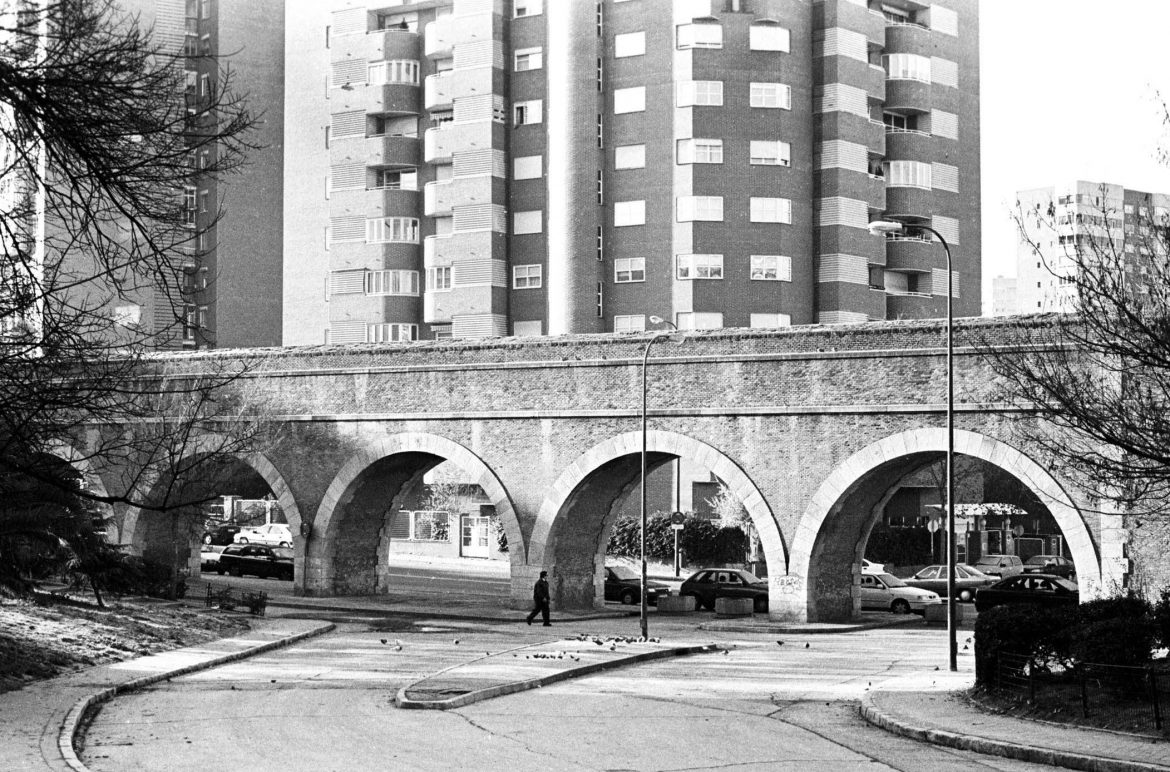 Along the Avenida de Pablo Iglesias in the north-west barrio of Buenas Vistas lies the Aqueduct of Amaniel, a half-buried vestige of one of the most important engineering projects ever made in Spain.

The aqueduct, which owes its name to the park Dehesa de Amaniel (now Dehesa de la Villa) was built in the 1850s when the canal system of Isabel II was constructed in order to provide the city with enough drinkable water for its growing needs.

Despite the proximity of the Manzanares River, its water was never used by Madrid population because of its unsuitable chemical composition and lower elevation with respect to the city itself. Instead, madrileños historically relied on water coming from the so-called qanat or viajes de agua. They constituted an underground network of canals that collected and delivered water from various subterranean sources, which Madrid owes its name to. In the 9th century, when Spain was a muslim country, it was named al-Majrīṭ in Arabic meaning ‘source of water’. From this came the name Majerit or Magerit in Spanish, later spelled Madrid.

Originally built during the city’s Arab domination, the qanat network was substantially extended from the early 17th century as a result of a population boom. In this period, just like the aqueduct that would be built two centuries afterwards, a viaje de Amaniel was constructed in this same area as part of the qanat network extension. It was delivering water to the Palacio Real, and was unsurprisingly one of the first ones being built.

As Madrid’s water needs kept growing, it became obvious that the qanat system would be insufficient to provide enough drinkable water to its population. In the mid 19th century, the canal system of Isabel II was created, an ambitious and forward-thinking project that represented a major milestone for the Madrid water supply system. Its construction work took seven years and resulted in almost 80 kilometres of canals, tunnels, syphons and aqueducts, providing the city with fresh water from the Lozoya river in the Sierra de Guadarrama.

The Aqueduct of Amaniel was created then, and is the last aqueduct before the water reaches the city’s reservoir of Islas Filipinas. It is part of the so-called Canal Bajo, the first branch of what today has grown into a canal network of several thousand kilometres, supplying water to the six million inhabitants of the Comunidad de Madrid.

Since the construction of this first branch to which the Aqueduct of Amaniel belongs, the Canal of Isabel II has kept growing in size alongside its community and the importance of the aqueduct itself has slowly declined.

When the Avenida de Pablo Iglesias was created back in the 1980s, the aqueduct ended up being partially buried underground, hiding part of its original arches. In 2004, a neighbourhood initiative saved it from being demolished altogether when the Madrid City Council was considering building an underground tunnel to connect Tetuán district with the M-30.

In 2018, the neighbourhood association of Cuatro Caminos–Tetuán launched the project ¿Redibujamos los jardines? with the aim of rethinking and rehabilitating the park around the aqueduct. With the help of the local community, the area was redesigned to revamp its daily use and role as a meeting space, and the park pavement and gardens were embellished with colourful artwork.

Today, despite this effort, the park appears neglected and mostly used as a crossing to other destinations.

Throughout the years, the local community have put forward several proposals to pedestrianise the aqueduct, to promote and facilitate walking around the neighbourhood – the aqueduct could indeed represent an easy, flat way to avoid the significant height change of the Avenida de Pablo Iglesias. However, as the aqueduct pertains to Canal de Isabel II public company, the Madrid City Council have so far rejected the proposals.

Despite its fascinating past, the Aqueduct of Amaniel remains today only a fenced addition to the Madrid urban landscape, and unless a new initiative successfully manages to integrate this piece of history into the current Buenas Vistas community life, it is doomed to stay this way.

This article was written by Alessandra Croce, a self-proclaimed urban explorer with a long-lasting romance with capital cities and an endless passion for human stories. After several years developing the left side of her brain, she eventually quit her scientific job to fully dedicate herself to her artistic and creative passions. She can be frequently seen climbing in random locations or dashing around Madrid on her faithful two-wheel companion.