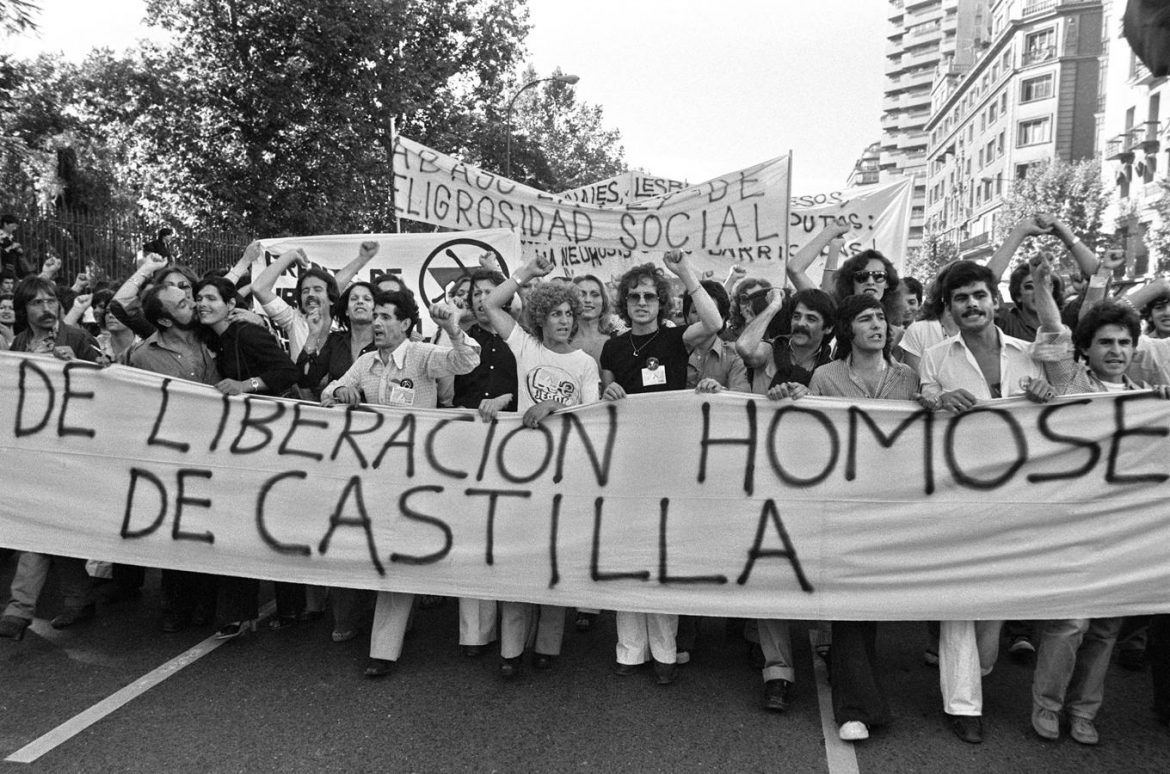 Secret gay nightclubs and bars were opening right under Franco’s nose and the cornerstones of Chueca’s infamous nightlife were being laid. By the time the dictator died, in 1975, Spain’s marginalised communities were already organised and ready to begin the countrywide fight for freedom of expression.

Even after Franco’s death, being gay continued to be an arrestable offence, as was being a sex worker, being homeless, and unemployed. La ley sobre peligrosidad y rehabilitación social (the law on danger and social rehabilitation) was used to arrest anyone the authorities loathed and many of those marginalised by this law would become Madrid’s earliest Pride protesters.

One hot June afternoon in 1978, protestors had just one demand: the abolition of this law. 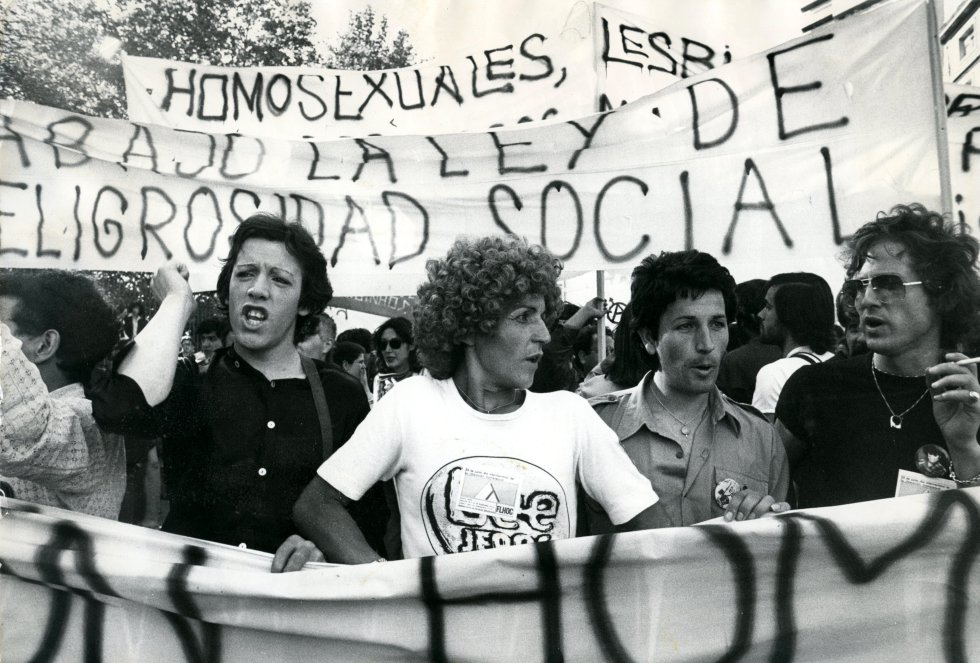 Ramón Linaza was there, who started smiling as he recounted the day to me. 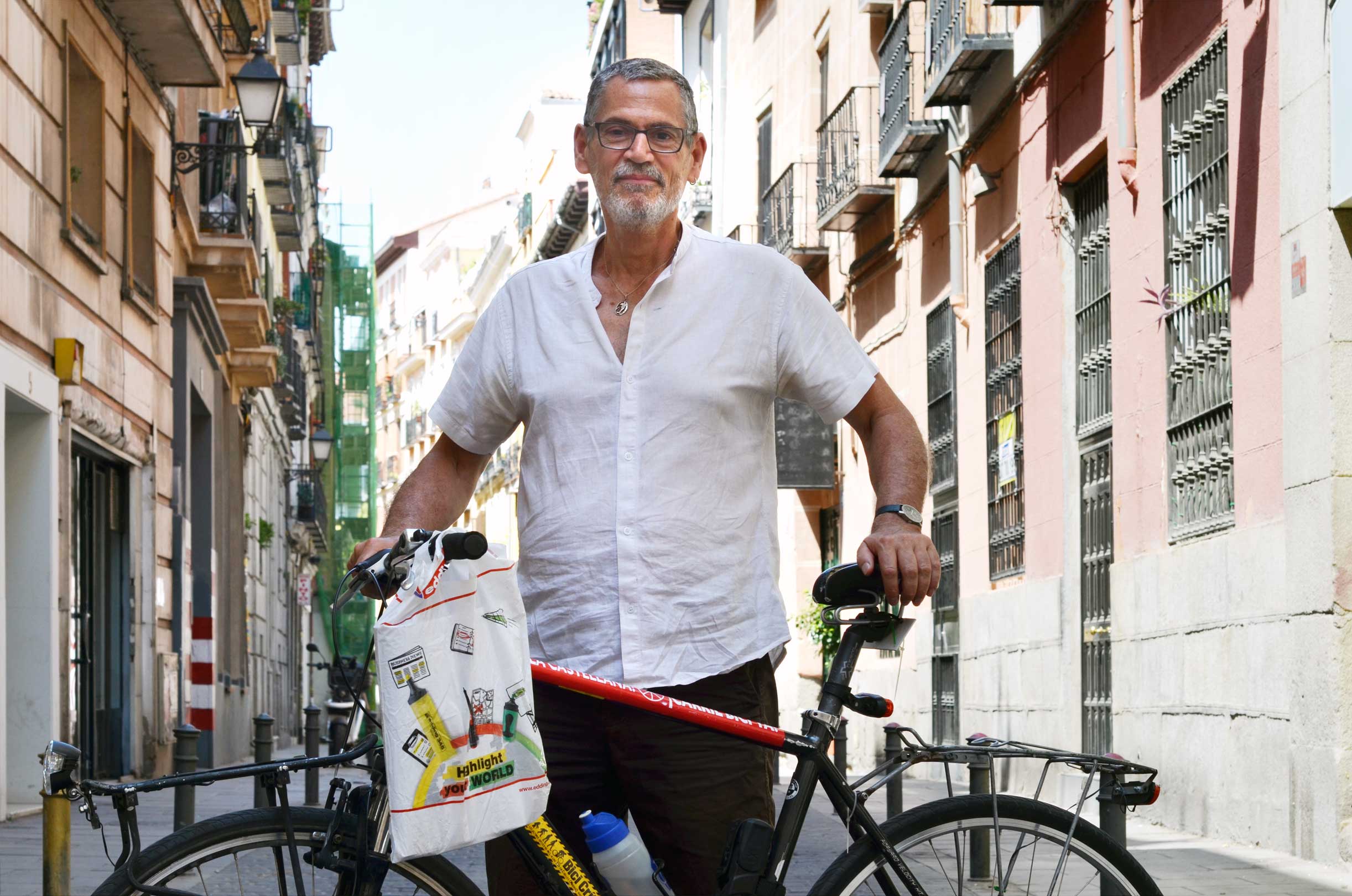 Somehow we got permission to march. I couldn’t believe it! And we were around 7000-strong! 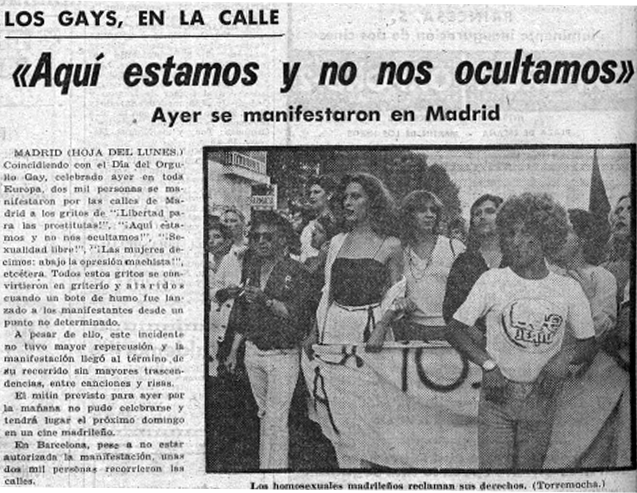 The group he was part of was called Frente de Liberacion Homosexual de Castilla (The Gay Liberation Front of Castile) and Ramón, pictured below in the middle holding the banner, proudly marched with them in 1978.

We were all so happy, but I remember at one point, the police were very nervous so they asked us to march faster. We created a chant to speed us up, which went “Que buenas son las fuertas represivas!” (How good are the repressive forces!)

The first Madrid Pride march in 1978 brought marginalised groups together. Sex workers fought for disabled people’s rights and single mothers fought for the right for homeless people to sleep on the streets. And by some miracle, the “acts of homosexuality” articles of ley sobre peligrosidad y rehabilitación social were abolished just seven months later, in January 1979. But the following year’s Pride march would prove to be a disaster in comparison.

The authorities never granted permission, so marching only around 1,000 people through Casa de Campo was believed to be a safe plan B. However, groups of ultra right-wing youths turned up and aggressively dispersed the crowd. They attacked protesters outside metro Lago, causing a head injury to one man, and one aggressor pulled out a gun firing four shots into the air. The police later recovered a revolver, four machetes and several clubs from the ultras.

The Frente de Liberacion Homosexual de Castilla released a statement, which was published in an article in El País in 1979:

For centuries, we’ve been hidden. They’ve persecuted us in a thousand and one ways: the Church, the patriarchal family and the States have all been our executioners. It’s time to rise up against all discrimination, against all legal or cultural repressive forms of sexuality in general, and against homosexuality in particular. “Sick, dangerous, sinners” – we have been attacked both by the totalitarian left and by the right – civilised or not. Today, we are illegal.

The fight to fully repeal the ley sobre peligrosidad y rehabilitación social would continue to be the running theme of every Pride march until its full repeal in 1995. Meanwhile, Madrid’s LGBT+ scene would continue thriving. According to Ramón,

The nightclubs were socially promiscuous. You had every character in there: from aristocrats to those who didn’t even identify as a minority. We were not an exclusive community, we were inclusive. Back then, we were even more open-minded than we are today. 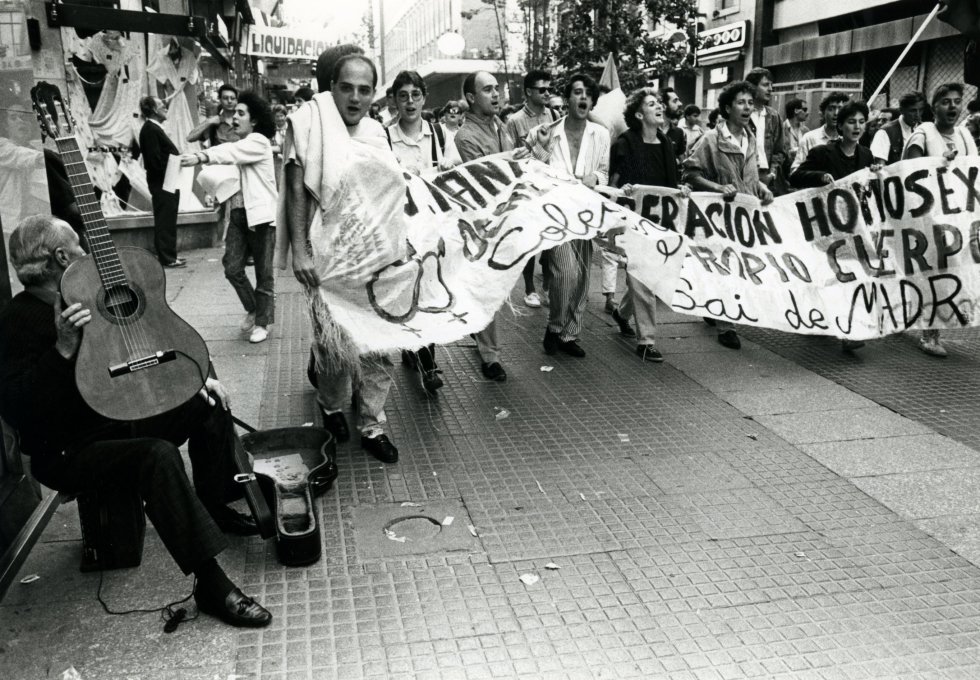 “MADRID IS AN LGBTQIA+ BUBBLE”

The dictator was dead and the transition to democracy was in full swing, but Spain was still deeply struggling with freedom of speech and expression, and claws of this past still grip the country today.

Madrid is an LGBTQIA+ bubble, and that’s why many lesbians, gays, transgender people move here from other parts of Spain and beyond.

… said Boti García Rodrigo, pictured in the middle, below. She was the Chair of COGAM, a non-profit organisation that fights for the rights of the LGBTQIA+ community and, at 74 years old, she continues taking to the streets: 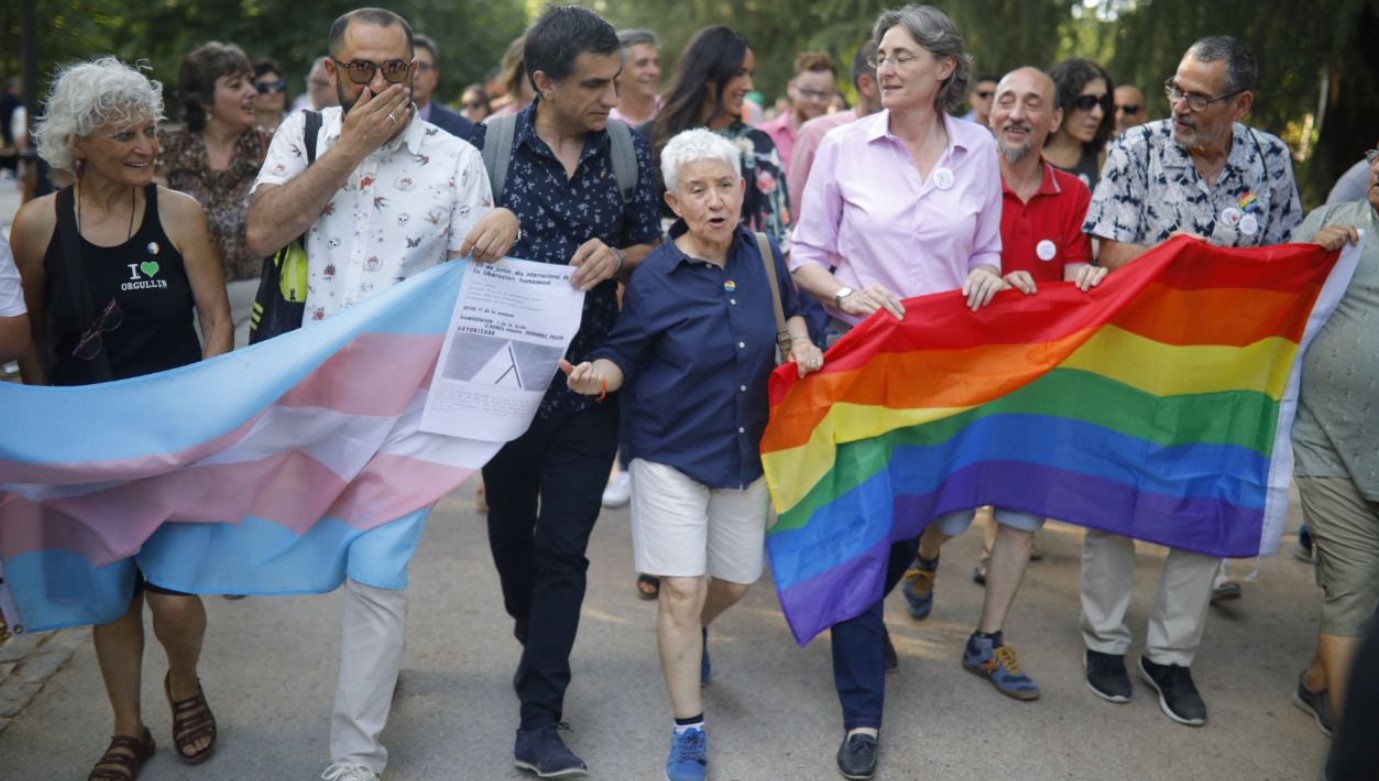 We met for coffee one morning last week in one of her favourite Lavapiés cafes, which has a shrine to Stonewall – the riots that changed gay rights history. I asked her why in other parts of Spain, people aren’t as open-minded as they are here in Madrid.

Oppressive laws may have been repealed and progressive laws may be in place, but society will always be slow to catch up. For example, I know a gay couple from Teruel, who got married without any problems, but they daren’t put their names on their letterbox for fear of what their neighbours would say or do.

We then got chatting about Spain’s first LGBTQIA+ retirement home, which opened recently.

It’s hard enough coming out the closet, but when you go into an old-people’s home in Spain, you have to go back in! They’re like churches – the worst of all hells! They’re deeply connected to religion and are very disapproving of our community. I wish I could say there were more LGBTQIA+ retirement homes being built, but it’s not the case. 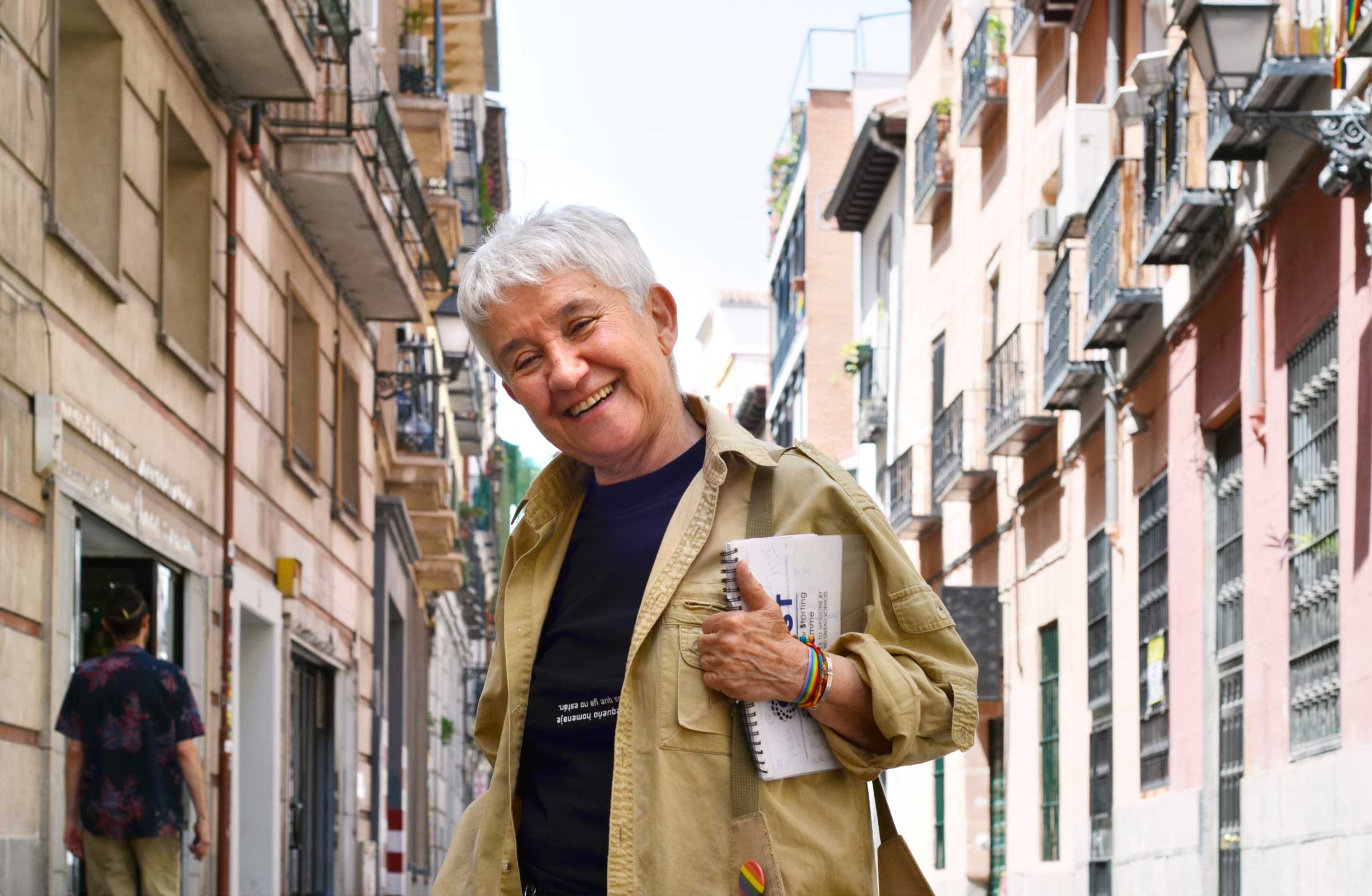 THE FIGHT IS FAR FROM OVER

It’s clear that Spain has made monumental progress in LGBTQIA+ rights since the death of Franco. Madrid – one of the most LGBTQIA+ friendly cities in the world – has a lot of be proud of,  but the fight is never over. The freedom of expression that we have today shouldn’t be taken for granted, because the path backwards does exist.

From Franco to freedom of expression, and the fight that is far from over was last modified: June 3rd, 2021 by Madrid No Frills
Share:
Previous Post 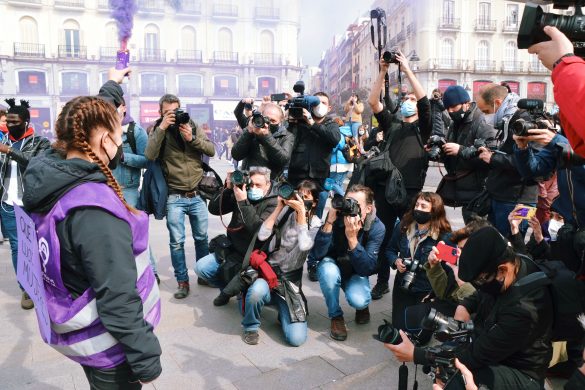