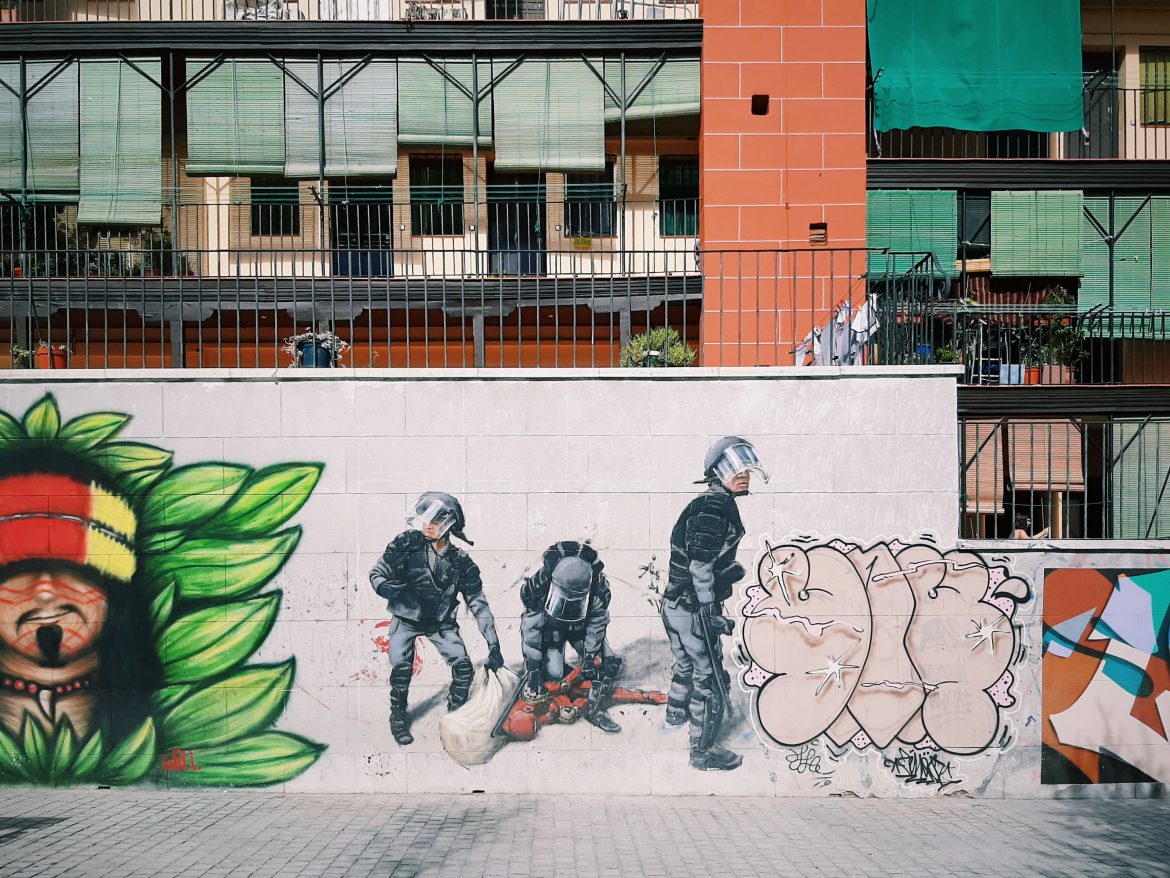 Although street art is deeply connected with gentrification, it often gives a voice to the precisely the victims of it. The spray-painted murals adorning the walls of Madrid speak truths – truths that the passionate graffiti hunter Gerardo taught me how to read. In the secret messages left behind by graffiti writers, I saw not only themes of suffering and discrimination but also a growing backlash against them.

Gerardo arranged for the group to meet at Atocha station. No sooner had we introduced ourselves than he began telling me things I didn’t know. I’ve been living in Madrid for five years and like to pay extremely close attention to what’s going on around me, and yet I’d missed something already. This turned out to be the theme of the afternoon.

I learned about the techniques graffiti writers use, how styles can differ between trained and self-taught artists, and about their upbringing – Gerardo seems to know some of these artists personally.

We walked into Lavapiés and straight past all the pretty murals adorning shop facades. These are commissioned by the shop owners of Lavapiés and sponsored by the Mahou brewery. 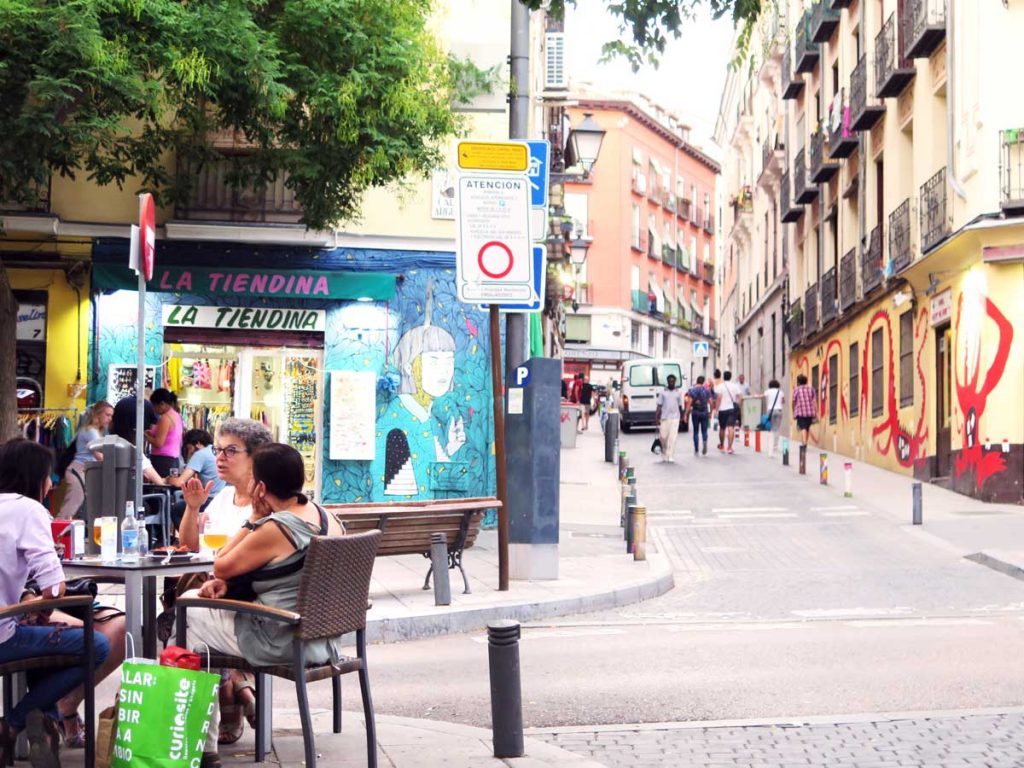 As talented as these artists are, they seem to use the walls of Lavapiés as their personal portfolio and aren’t of any interest to the tour. We’re on the hunt for something much more exciting: spontaneous street art and works that have political messages.

We wander through all my favourite parts of the barrio, and Gerardo points to a wall plastered with nightclub posters. “Do you see it?” he asks. “The young man sitting on the ground, crouched over his mobile phone?” Suddenly, a tiny spray painting emerged out of the dirt and torn posters, carrying a powerful message about the circumstances facing our younger generations.

As we continued through the narrow streets of Lavapiés, Gerardo’s stories turned a shade darker. Through various artworks, we learned about violence against women, systemic discrimination against racial minorities and the shifting soul of the neighbourhood due to creeping gentrification. 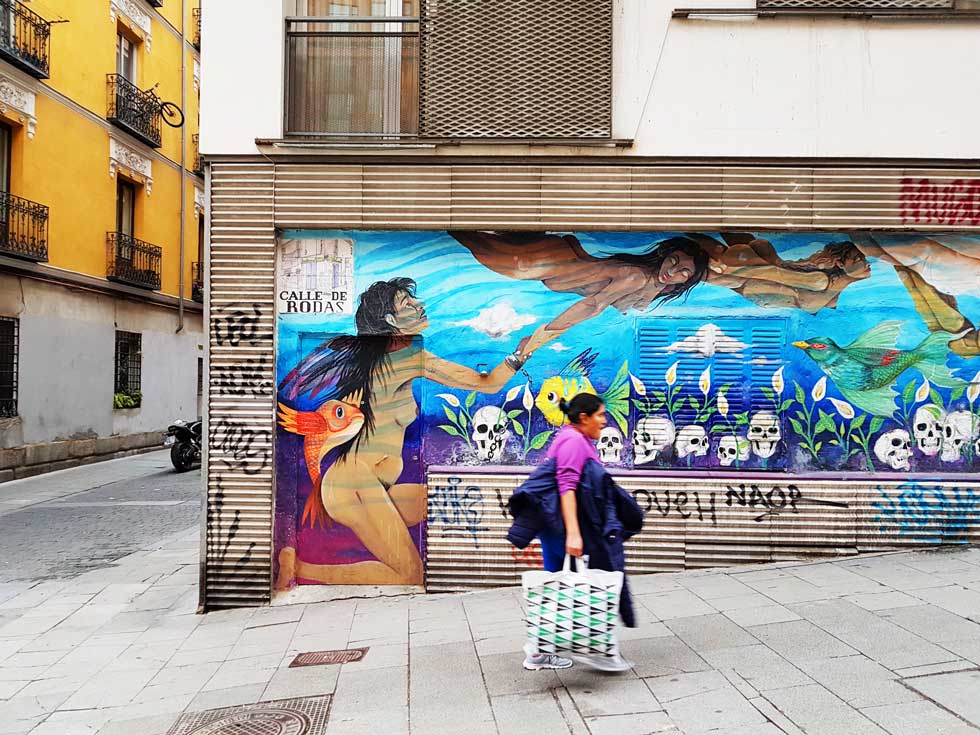 Though none of these issues are news to me, audible gasps from the tourists in the group reaffirmed how shocking these home truths really are.

Suddenly, one member of our group appeared unsettled.

You walk around this beautiful neighbourhood and it looks so pretty and perfect. But if you dig a bit deeper, you realise how much suffering there is.

In particular, she was referring to the message behind the artwork below depicting the late Mame Mbaye, whose death sparked off the Lavapiés riots. 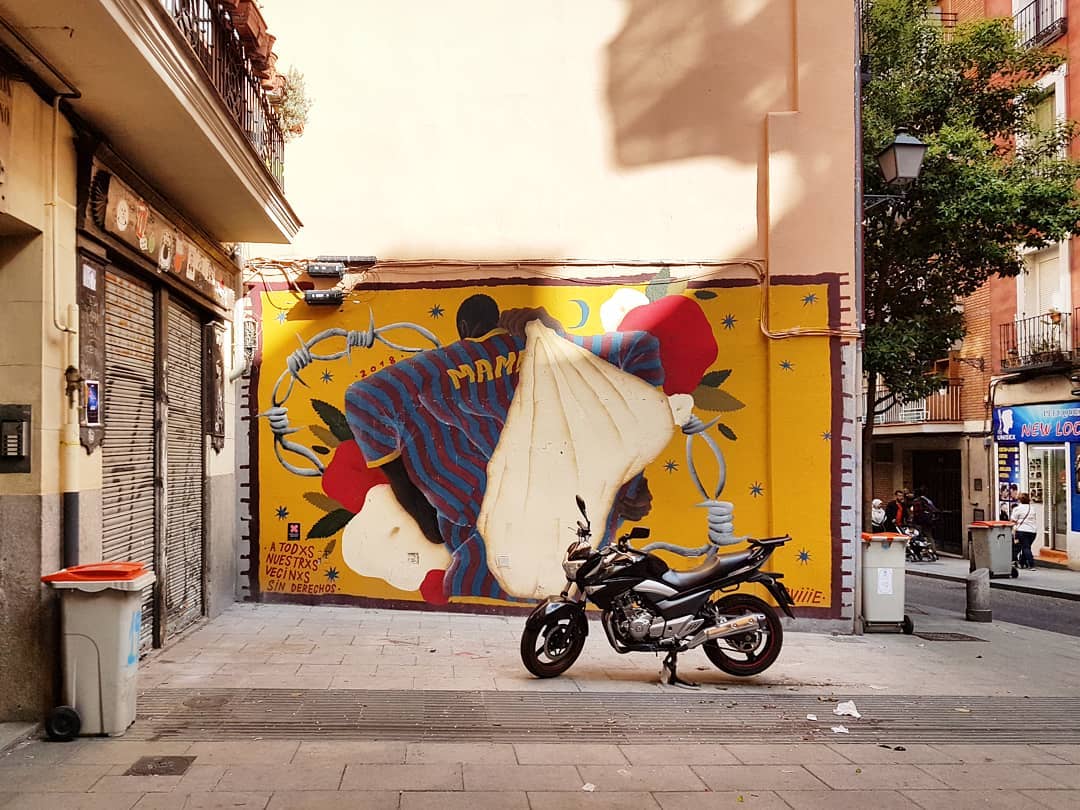 I chatted to Gerardo about my recent article for The Local about Time Out’s superficial crowning of Embajadores as the coolest neighbourhood in the world. It seems Gerardo and I have a lot in common, as he explains:

We try to show the reality of Madrid and especially of Lavapiés through the art on the streets. The lights and the shadows; the problems and the challenges as well as the good and bright side of this amazing city.

Not all of Madrid’s street art represents minorities, nor does it necessarily carry a powerful message. Sometimes street art is simply pretty paintings, or vanity tags, and artists can also be known to hijack social issues for their own portfolio and publicity. However, the artworks Gerardo showed me very much represented the people’s mood. 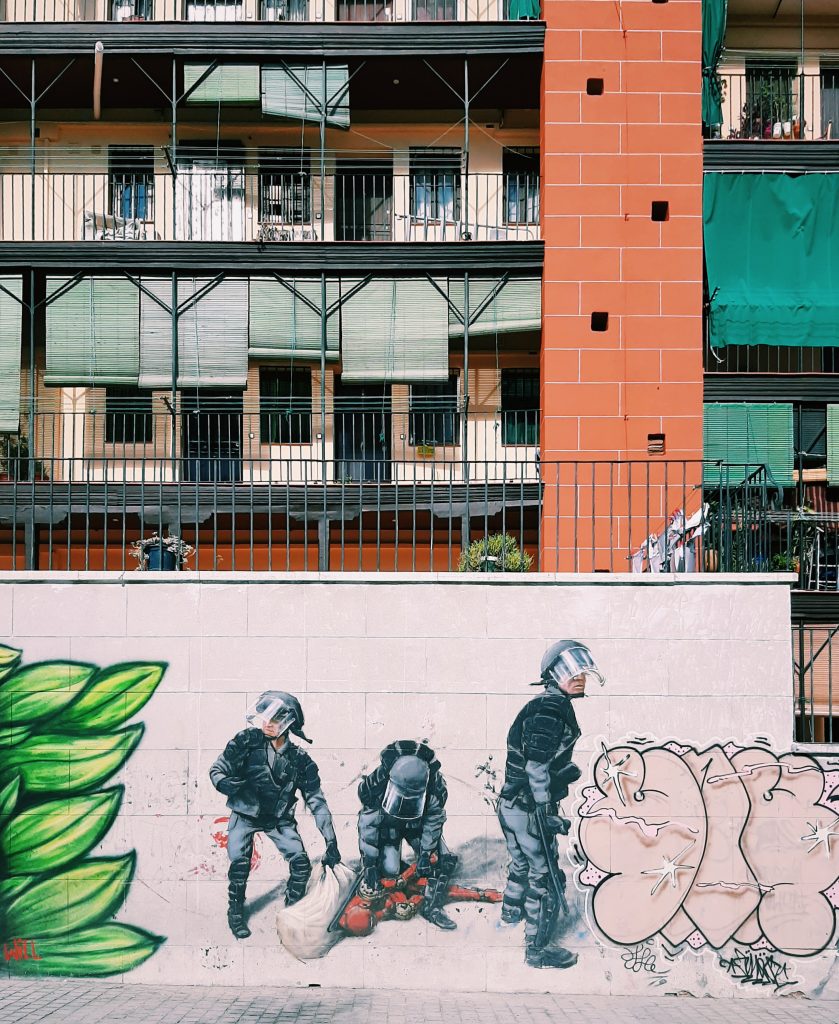 Street art doesn’t have to mean gentrification. Indeed, they’re linked but not directly. Meet the connector: capitalism, the money-driven disruptor of equality, also responsible for unregulated rent increases and the decay of long-standing communities.

This social regression is neatly illustrated in the artwork below, which Gerardo explains as we walk past.

Don’t blame street art: blame greedy property investors and the government for not stopping them. We should be free to enjoy street art (commissioned or spontaneous) without worrying that it’s going to price us out of our homes. But let’s not forget to discuss the issues that the political artworks portray, because that’s exactly why they’re there.

BE A TOURIST IN YOUR OWN CITY

Cool Tours Spain attracts a lot of foreign tourists, but it’s Madrid’s residents that their tours are really for. Even if you’ve been living in Madrid for years and walk through these streets every day, Gerardo will open your eyes to powerful messages that you had no idea existed, and whose darkness you will never be able to unsee.

Great article! I’ve lived in large cities all my life and enjoy great street art. A couple years back, I too, learned so much about Madrid with Cool Tours Spain when I treated my sons with a tour. They loved it and I absorbed it all! Since then, we as a family now book street art tours whenever we visit a cool city.

Thanks for the great article. I’ve been wanting to do a street art tour of Madrid, but never knew what place to go through. I definitely agree too that the street art isn’t what drives up rent and displaces neighborhoods but large property owners who buy up whole buildings just to turn them into AirBNBs or to leave empty as an “investment”.