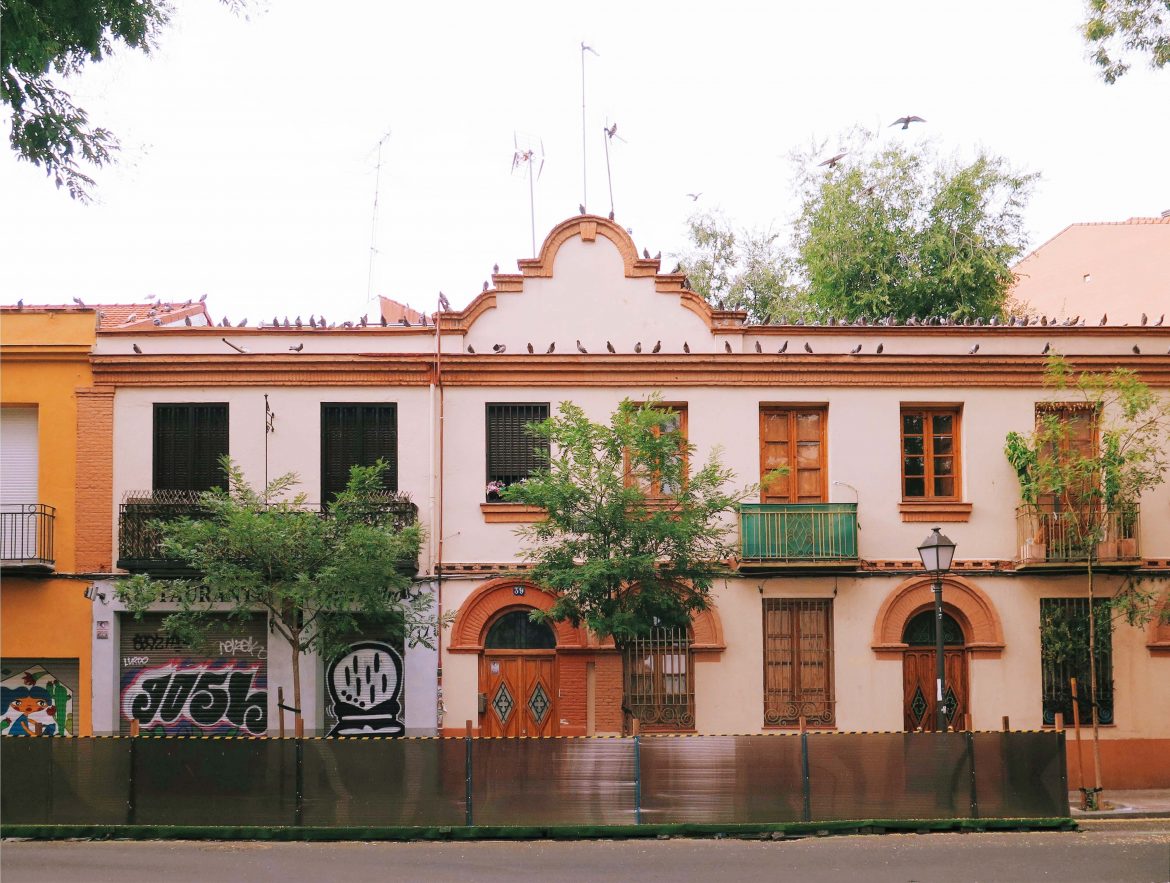 Museo de Ferrocarril, a living museum for generations of train carriages and locomotives, was once the heart of a huge railway community in Madrid. Thousands of railway workers lived in affordable, handsome homes just a two-minute walk from work – a utopian existence in the context of Madrid today.

This simple life was possible thanks to Spain’s first Ley de Casas Baratas (Cheap Housing Law), enacted in 1911. It paved the way for the creation a brand-new model of urban living: micro-barrios, based on an economic move to improve the living conditions of workers. Previously, Spanish migrant workers had been living in basements, slums and – if fortunate – corralas, where they had to share one toilet between up to 100 of their neighbours. An unhappy and unhealthy workforce is disastrous for an economy, so something had to be done.

However, just as workers began feeling optimistic, the ambitious development plan was vulnerable to the speculator – something we still very much see in Madrid today. Landowners took the housing subsidy to build homes on land that they owned but would erect luxury villas unaffordable for the majority of Madrid residents. Examples of this can be seen today in the barrio of El Viso near Nuevos Ministerios, and the Colonia de la Prensa in Carabanchel, where the wealthy live a village lifestyle.

The working classes and the middle classes had to find a way to take the new Cheap Housing Law back into their hands and so grouped together to form cooperatives, building hygienic, affordable single-family homes for themselves.

In 1923, with the Cheap Housing Law on their side, cooperatives began commissioning the construction of the Colonia Casas de Ferroviarios (Colony of Railway Workers’ Houses) and, by 1926, the first neighbours moved in. This micro-barrio – essentially a village in the middle of a bustling city – is laid out along two winding streets: Calle Tomás Bretón and Alonso Martos, tucked behind Delicias Station.

Each house consists of two floors with interior stairs connecting them. Most have their own front door and even a patio at the back. Their facades are ornate, decorated with a mix of exposed brick and plaster, painted earthy reds, yellows, and white. Big windows with Juliette balconies overlook tree-lined streets with wide pavements, but the most iconic feature of these houses are their arched doors.

On 19 April 1939, just 18 days into the dictatorship, another subsidised housing law came in and, in 1941, the original Renfe company was founded and employed around 12,000 people in Madrid. In December 1947, a further lot of railway workers’ housing, reaching a total of 248 units in 1957, was completed, but not in the style of the original casas. Taller buildings boxed in the original Colonia Casas de Ferroviarios and made it secluded and almost secret, but vulnerable to high-rise development.

As such, most of the original houses have now been either demolished or stacked up to modern high-rises that better serve the city’s real-estate interests, and most of the surviving houses have been divided into separate flats. Protection for these buildings didn’t come into place until the 1980s, when the City Council began cataloguing and conserving some of Madrid’s historic neighbourhoods. But there is one part of the Colony of Railway Workers’ Houses that remains exactly how it was built.

Madrid’s neighbourhoods are a Frankenstein of old houses, micro-barrios, urbanisations, and empty plots. Walking her streets has provided me with an endless source of fascination and theorising for almost 10 years now, but always leaves me wondering how housing has gone from being a basic human right provided by the state to something for which we have to fight for our lives. There hasn’t been a new Cheap Housing Law since 1939 (created under Franco) and, as a result, the houses on Calle Tomás Bretón – once humble cooperative housing for the working-classes – are now worth millions.