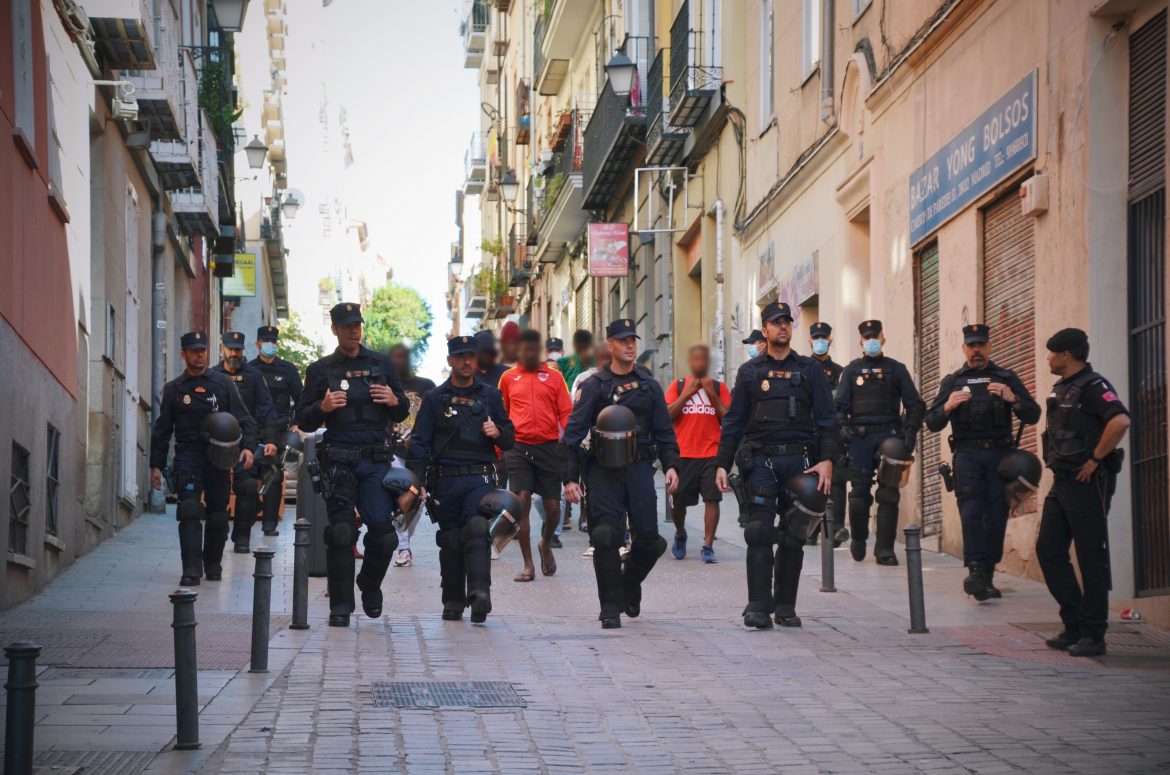 At 7 o’clock yesterday morning, 280 police officers evicted 70 homeless people sheltering inside an abandoned block of flats on Plaza Nelson Mandela. The eviction was calm, there was no violence, nor any form of protest from the neighbours as there usually would be when someone was being evicted. That’s because there was a collaborative effort involved in their eviction, which involved local residents making continuous complaints to the council leading to the police tracking down the owner of the building, who was reportedly pressured into ordering their eviction.

The disused building dates to 1970, when the owners, believed to be two brothers, had to abandon the project due to an unknown legal complication. Knowing they’d leave the apartment block empty for some time, they hired a security guard to stop squatters. But, with the passage of time and abandonment that seemed to have no end, the building has had numerous occupants over the years.

On 6 January, 1999, the uninhabited building on Plaza Nelson Mandela (named Plaza de Cabestreros at the time) was squatted. On the first floor there was a bar, meeting rooms and a telematics area. There were seminars, concerts, film screenings, neighbourhood meetings, dance classes and photography workshops. But, after a period of unsuccessful negotiations with the owner of the building, they were evicted on 28 August, 2001.

More than a decade of abandonment later, in 2013, local activists squatted the building and called it La Quimera, naming it after a mythical hybrid beast, which also means ‘pipe-dream’. Dozens of neighbourhood associations would meet on all nights of the week, and it was a place for children to get help with their homework, for migrants to learn Spanish, and for the neighbours to bond in a mutually owned safe space.

Just before the pandemic, I attended a meeting there about the fate of Baobab, and what would happen to the historical building after the restaurant closed. We discussed how to stop the planned hotel going forwards and how to protect the rent of flats on the square. Then the pandemic hit, and all activities in La Quimera stopped. I can’t confirm why activities never resumed – at least not on a regular basis – or who was responsible for the management of the building.

During this time, undocumented migrants, long-term homeless people, and vulnerable women and even one minor moved in, seeking a form of shelter Madrid city council failed to provide them with. Left without any help from social services, residents of the building were forgotten. According to residents living near La Quimera, they witnessed a local increase in crimes, fights and drug use, despite there being a near-constant police presence on the square.

After years of complaints to the council, yesterday morning, all 70 unofficial residents of La Quimera in Lavapiés were evicted without any solution. Some were arrested, and others were escorted two blocks away. Police walked around 10 men and one woman down calle Mesón de Paredes, out of the sight of most press, who’d been positioned on the south-east side of La Quimera with limited visibility of the operation. The police then left residents to disappear into the streets.

Watching this with my own eyes was like seeing a gang fly-tipping into a slow-running stream on the outskirts, except that the ‘rubbish’ was undocumented migrants, and that the ‘stream’ was just a couple of streets away from La Quimera. It was brutal.

Assisted by Besha, a local Lavapiés resident and anti-racism activist, seven men turned to Samur Social, who had just one van parked outside the Tabacalera, and only three staff. The social workers tried to provide advice but they said, with genuine dejection, “There are no beds. You’ll have to join the waiting list”.

This contradicts a statement by Madrid City Council, claiming that none of the 70 evicted from La Quimera needed alternative housing, and that all of them had found an alternative for that night. Having met the seven men who approached Samur Social yesterday, I’m confident that they did not have an overnight solution, and certainly not a long-term solution.

For the remainder of the evening, police officers formed an impenetrable frontline around the empty La Quimera building, preventing former residents from returning to collect their belongings, even as Besha attempted to negotiate, but with no success.

That evening, the whole of Lavapiés was talking about La Quimera, sparked by the question, “Why were there around 20 police vans parked on Plaza Arturo Barea all day?” I was disheartened to hear rumours claiming residents of La Quimera were delinquents. When someone is deliberately excluded from a country’s healthcare and social care system, it takes a miracle for them to not slip through the cracks.

Instead of turning the homeless residents of La Quimera into the villains, we must point the finger at the real culprit: a state so lost in its archaic box-ticking bureaucracy, combined with institutional racism and classism, that it’s willing to evict homeless people without any solution and expect them to pick themselves up again.

“Evicting these people and leaving them on the street brings more problems,” said Besha. “More problems for everyone, not just them.”