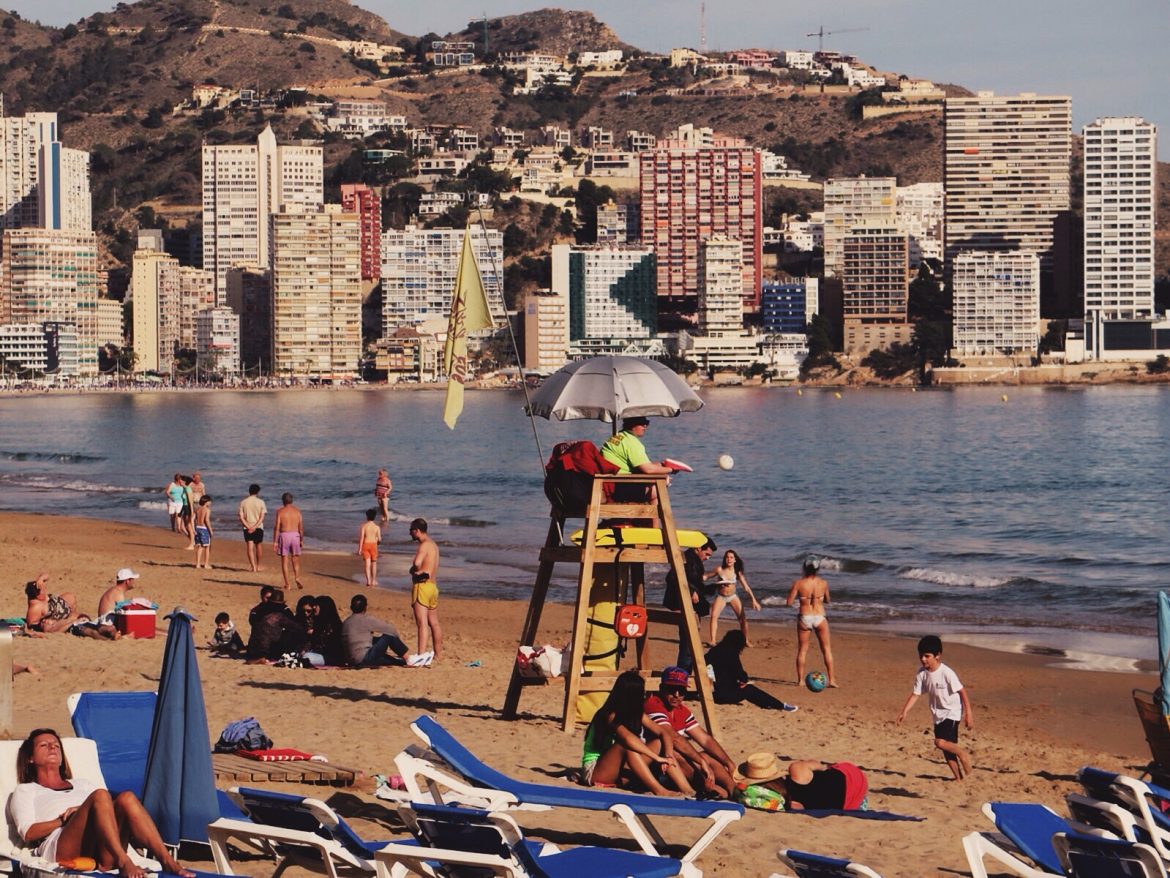 No foreigner being called ‘guiri’ is going to take it as a compliment yet we’re expected to just take it. Digging deeper into the word guiri, I’ve confirmed that it is, indeed, not something that I’m okay with being called. Here’s why.

The word guiri entered the Spanish dictionary in 1925. According to the Real Academia Dictionary, it has Basque origins in reference to the Cristinos (pronounced guiristinos) during the Carlist Wars. A guiristino (guiri for short) was a member of the enemy forces. Guiri then became a popular way to describe opposing political parties and, later, during the Francoist regime, to describe the Guardia Civil. Another potential origin is from Caló, the language of Spanish gitanes. In Caló, a guripa (also kuripén) is someone who maintains order – perhaps the community’s own way to describe the Guardia Civil.

But there’s another word that must be considered in the origin of the word guiri, which is gora. It means ‘white people’ in Hindi (gori means white woman) and is widely used in India and among the Indian diaspora. Because it’s believed that Roma people originated in India, this could suggest that the word guiri may in fact go back even further than the Basque country and even further back than 1925. It also establishes that the naming and, therefore, the othering of white people has long had its place in communities around the world.

Today, in the context of Spain, guiri typically refers to a pale white person – someone whiter than the way most Spaniards perceive themselves. Guiri is also a cultural reference for someone who is from a northern European country or a predominantly English-speaking continent such as America and Australia, also including people of colour.

Guiri is also a term that carries entitlement, imperial wealth and power, a lot like how Gora is used in Hindi, and how guripa is used in Caló. But a guiri is also categorised as naïve and/or ignorant, trapped in their own culture due to refusal or inability to integrate. They will dress wrong, be sunburnt and generally look hot and bothered.

Spaniards look down on guiris and may even feel pity for them, seeing them as missing out on Spanish culture because they’re too lost in their own world. Most Spaniards will argue that the word guiri is not offensive, but it undeniably makes sweeping assumptions about a person based on either their appearance, their nationality, or their behaviour.

I’ve been called a guiri many times and I don’t like it. Although I don’t find it as offensive as racist slurs I have been called (I’m mixed-race, white/South Indian), nor do I categorise Guiri as a racist term, being called a guiri does remind me of how it feels to be othered for my appearance, my origins, or assumptions made about my culture and behaviour. While the racism I’ve received has aimed to position me as being less intelligent, less able, and less capable than my white counterparts, I feel that the term guiri carries the idea that I’m better, or at least I think I’m better than Spaniards, which, if true, would be quite problematic.

In 2017, Spain’s Christmas lottery, El Gordo, released an advert called “The Guiris”. The advert was filmed in Benidorm, a popular tourist destination where many ‘guiris’ can be found. According to La Vanguardia, “The Guiris shows, in a humorous tone, how foreigners are adopting all Spanish customs. They eat paella, dance, or sunbathe by the sea, but they also buy the Christmas Lottery to buy a flat in Benidorm or even “a piece of the beach”.” In the closing scene, the music becomes menacing and the camera pans to guiris holding their lottery tickets as they laugh wickedly.

The moral of the story: Spaniards, buy a lottery ticket and reduce the chances of guiris winning your money and therefore buying up your land! The advert openly demonises guiris and perpetuates the idea of them colonising Spain. Although is not the case with most foreigners who visit Spain or live here, it must also be noted that some foreigners do, in fact, colonise Spain.

Blackstone is an American vulture fund that owns tens of thousands of residential properties in Spain, including thousands of social housing units. The company is responsible for a bulk of Spain’s daily, violent evictions, but foreign companies and individuals are not solely responsible. Spanish landlords have cashed in on the property and tourism industries, indirectly displacing long-term residents.

The Spanish government too is to blame, having consciously dragged its feet in regulating the property industry. Instead of ensuring that its citizens have access to decent and affordable housing (a basic human right), the government’s neoliberal approach to the Spanish economy has resulted in mass deregulation and privatisation. They’re encouraging mass foreign investment and takeovers, causing devastating cuts to public institutions, such as healthcare, housing, and education. This capitalist and globalist policy strategy has exacerbated hatred towards foreigners in general, adding further stigmatisation to the word guiri.

I’m not saying we should stop using the word guiri or that it doesn’t exist – some people do fall into the definition of a guiri. They arrive in Spain with a preconceived idea of what this country and its people are. They look down on Spain, exploit it and treat it like their playground. They even impose their own narrative on what this nation is, serving to justify their obnoxious and, at times, xenophobic behaviours towards Spaniards. This is the reality of the definition of the word guiri, and I don’t like it.

In an interview for El País, a journalist referred to Madrid No Frills as “the guiri blog”, which I felt demonstrated a disappointing lack of pre-interview research. The grassroots journalism that I do requires integration and a deep understanding of the environment around me. It requires building trust with marginalised communities – Spanish and foreign – and speaking Spanish.

So please don’t call me a guiri, because I’m not one. And don’t tell a person that, when you call them a guiri, you don’t mean to cause offence. It’s not the person using the word that gets to decide if a word is offensive, it’s the person on the receiving end.

You may have noticed that, unlike the vast majority of publications, this platform remains free of ads, sponsors and investors. Independence is everything and we will not be influenced by those in a position of privilege or power. Therefore, I invite only our audience to support this project and only you to help us keep doing what we do.

Sorry – intent matters when using a word. You can’t say someone not to use a word because you find it offensive.

That’s… exactly how it works, actually? I am a fluent Spanish speaker who is not from Spain and I agree with every word Leah has said; guiri is offensive and dismissive. You can still use it, no one can stop you, but that doesn’t make it non-offensive.

Yes yes and yes! We’ve been arguing against the use of it for many years now – and our Spanish friends NEVER refer to us as “guiris”. It seems (to us anyway) that it is the British who seem to think it is acceptable.
Not to our household it isn’t.

Technically a guiri is also someone with non-Mediterranean northern european or anglosaxon features who comes from richer countries. Blonde, blue eyed Spaniards are often referred to as “guiri” as a nickname. A black American in Spain will rarely be referred to as a guiri. Neither will a Greek person or an Italian or even a (blond) Ukrainian immigrant. Any pejorative element in the term is a throwback from when Spain was a poor country which recieved richer tourists from northern Europe. Now its less of an insult than 15 or 20 years ago since Spain has become a fully developed country.