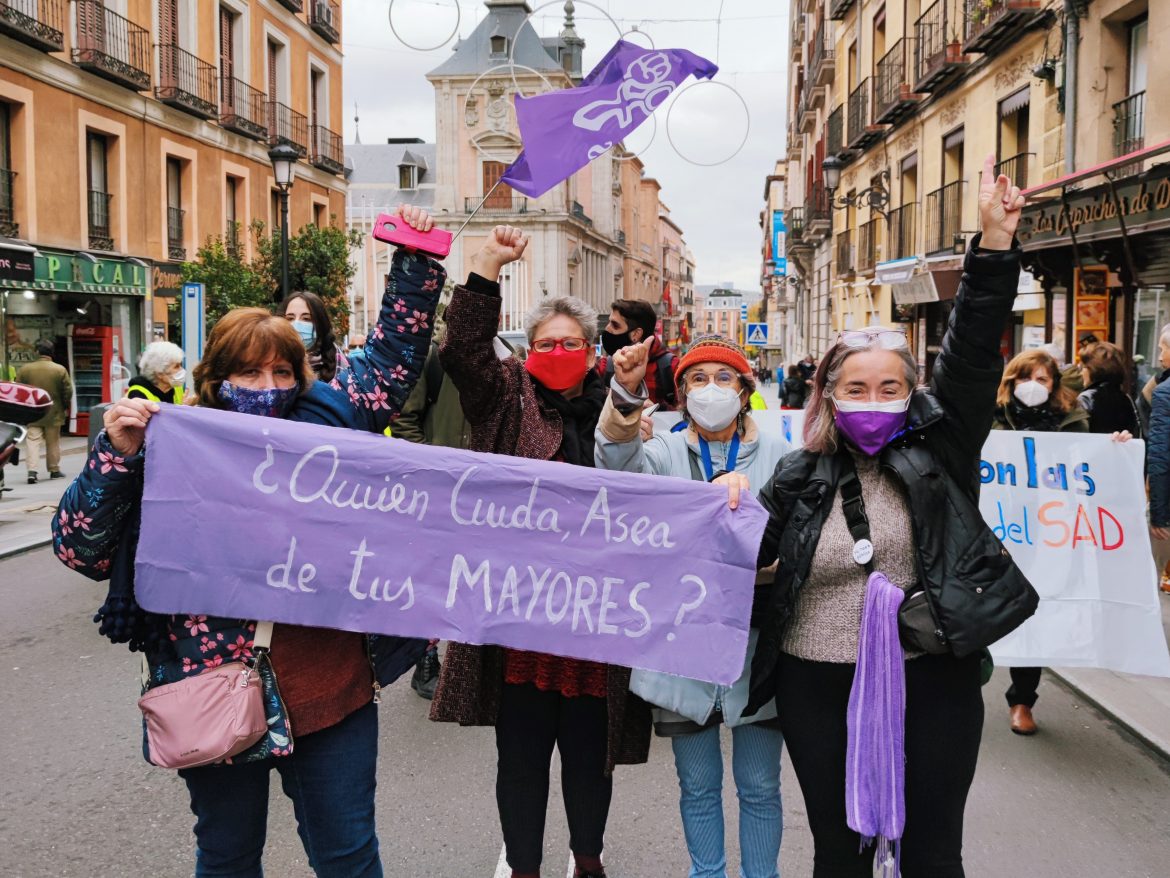 In a leafy and affluent neighbourhood in the northern suburbs of Madrid, the school run swings around. Women dressed in maid’s scrubs that are hues of clinical pink, purple and blue – rush around collecting other people’s children, walk other people’s dogs, take out other people’s rubbish and fetch other people’s groceries. Their uniforms mark who belongs to these security-patrolled communities, but the reality that exists beyond their scrubs is one of exploitation; long hours, low wages, limited legal protection and in some cases abuse.

[Domestic workers are people engaged in domestic work within an employment relationship performing work for a household or households (for example, cleaning, cooking and caring). It does not refer to those who conduct domestic work occasionally and sporadically (such as chores or light housework) as is not on an occupational basis.]

Spain, alongside Italy, has the highest number of domestic workers in Europe. In 2019, this figure was around 615,000 individuals, which is 3.3% of Spain’s workforce. Of this percentage, 70% are thought to be ‘internas’ (those who reside in the wealthy households in which they are employed), and 36% of domestic workers in Spain are known to be immigrant women. This equates to 120,000 registered domestic workers in the Comunidad de Madrid, however SEDOAC estimates the true number to be closer to 200,000. The domestic work sector is represented overwhelmingly by women from migrant communities and, as a widely unregulated sector, it’s very easy for workers’ rights to be violated.

Spain is one of the largest users of domestic workers in Europe. It seems surprising then, with Spain being one of Europe’s highest placed countries on the Gender Equality Index, that it is also so complicit in facilitating a sector that has been described as modern day slavery.

Carolina Alonso, a spokesperson for anti-austerity party Unidas Podemos, believes that there has always been a problem with the experiences of domestic workers. She explains that it remains a sector outside of traditional labour regulations, and that domestic workers are burdened with the double discrimination of being a woman and an immigrant.

The labour market actively discriminates against women, as women are forced to choose between being the primary caregivers, or working. There is no effective state-funded child care system.

It’s easy for wealthy women to maintain autonomy and freedom – to both have children and work – as they can pay for nannies or carers at a nominal hourly rate. Perhaps the demand for domestic workers can be explained by the lack of social care options. Carolina adds, “You can be sure that if this were a sector dominated by men, the precarity of this work would not be the same way it is now.”

It is clear that Ayuso’s proposed policy, “Comunidad enfocada a las familias y a la infancia” (Community focused on the families and infancy), is an insult to the families suffering financially. Her manifesto is written bearing only in mind the families who can afford to pay for an extra pair of hands. Carolina calls this la doble moral de la extrema derecha (the double morality of the far-right):

They are happy to exploit and benefit from the labour of immigrant workers, but they will openly discriminate against these people.

SAD (Plataforma Unitaria de Sociosanitarias de Atención en Domicilio (Union of Professional Caregivers)), is a trade union fighting for the rights of domestic helpers specifically contracted privately by the state to care for individuals in their homes. Carmen Diego, the spokesperson for SAD, explains that her organisation seeks to “dignificar” (dignify) their profession.

“There has been no study on the illnesses of these women in our workforce” Carmen explains, “and no risk assessment on our place of work. In this respect, we are discriminated against compared to other Spanish workers.” Carmen highlights how vulnerable these women are, which was proven during the pandemic when workers in the home help sector were the group second most Covid-infected sector in Spain. “What is even worse is that these women were excluded from the legal protections of Covid-19 because their jobs were considered low risk.”

It appears that internas, women who reside in the houses of their employers often experience some of the worst employment abuses. Young Peruvian influencer @angelica.lagarcia on TikTok, has taken to the Gen Z platform to share her experiences of working as an interna with sarcastic skitz and candid advice for women in the same situation.

Her videos talk about the little time she has in her role, how she is treated by her employers, and her legal status in Spain. As a young woman, she also maximises her free time to travel and explore her new country of residence, which she also shares on her TikTok account. Her popularity on the app has attracted not only many other women like her, but also countless xenophobic trolls who leave comments such as “Don’t return to Spain – stay in your country”, “We don’t want you here – get out illegal immigrants” and “Are you from Honduras? They always complain, they get a job and tell lies.”

Yet Carolina is clear: “Whilst Ayuso’s government is only preoccupied with the ruling class, precarious employment runs rampant”. Not only will it take local and national governments to change their priorities, it will require a change in societal attitudes to domestic and care labour. Domestic work should not be seen as a low paid or assumed labour for women, but as a societal burden. As Carmen reiterates,

We have to care for those who care for us. Care is a constitutional right and it should not be privatised or commodified.

This article was written by Eve Willis, a graduate of Spanish and Politics from the University of Surrey, whose interests include sustainability, gender issues, politics and historical memory. You can find her on Instagram at @evexplorando.