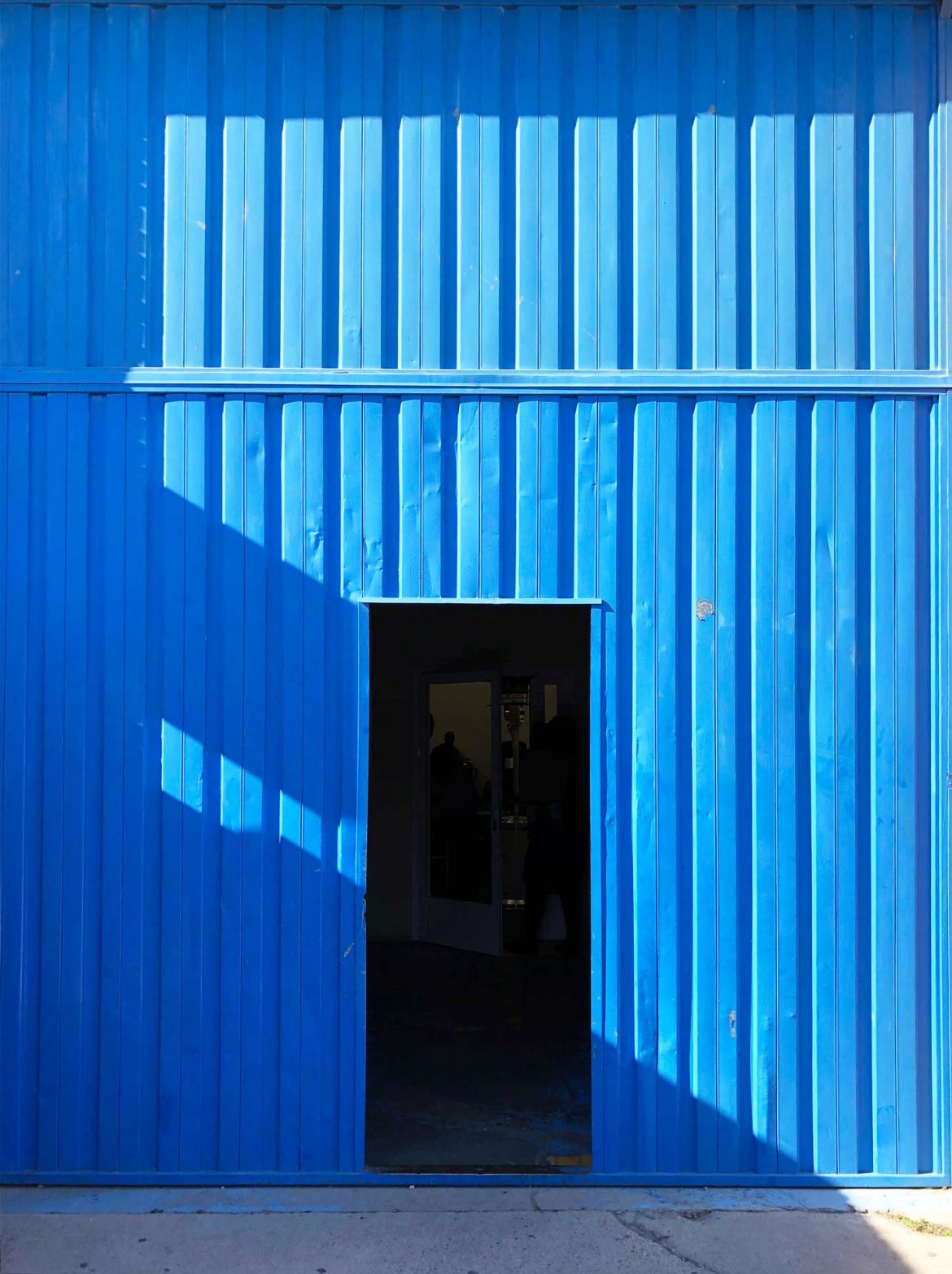 In one of Madrid’s many stark industrial zones, a Nigerian church provides an oasis of soul for its community. On any given Sunday, the area would be empty and silent, but for the rich gospel being performed to a lively crowd of parishioners, as Isaac Shamam explains.

The landscape is typical: factories, warehouses, construction sites and vacant lots filled with weeds and brothels. Red brick buildings with large metal grilles for gates painted in electric blue line the streets and, behind one of these gates, lies a brightly lit space where pastor Amos leads the daily church services. 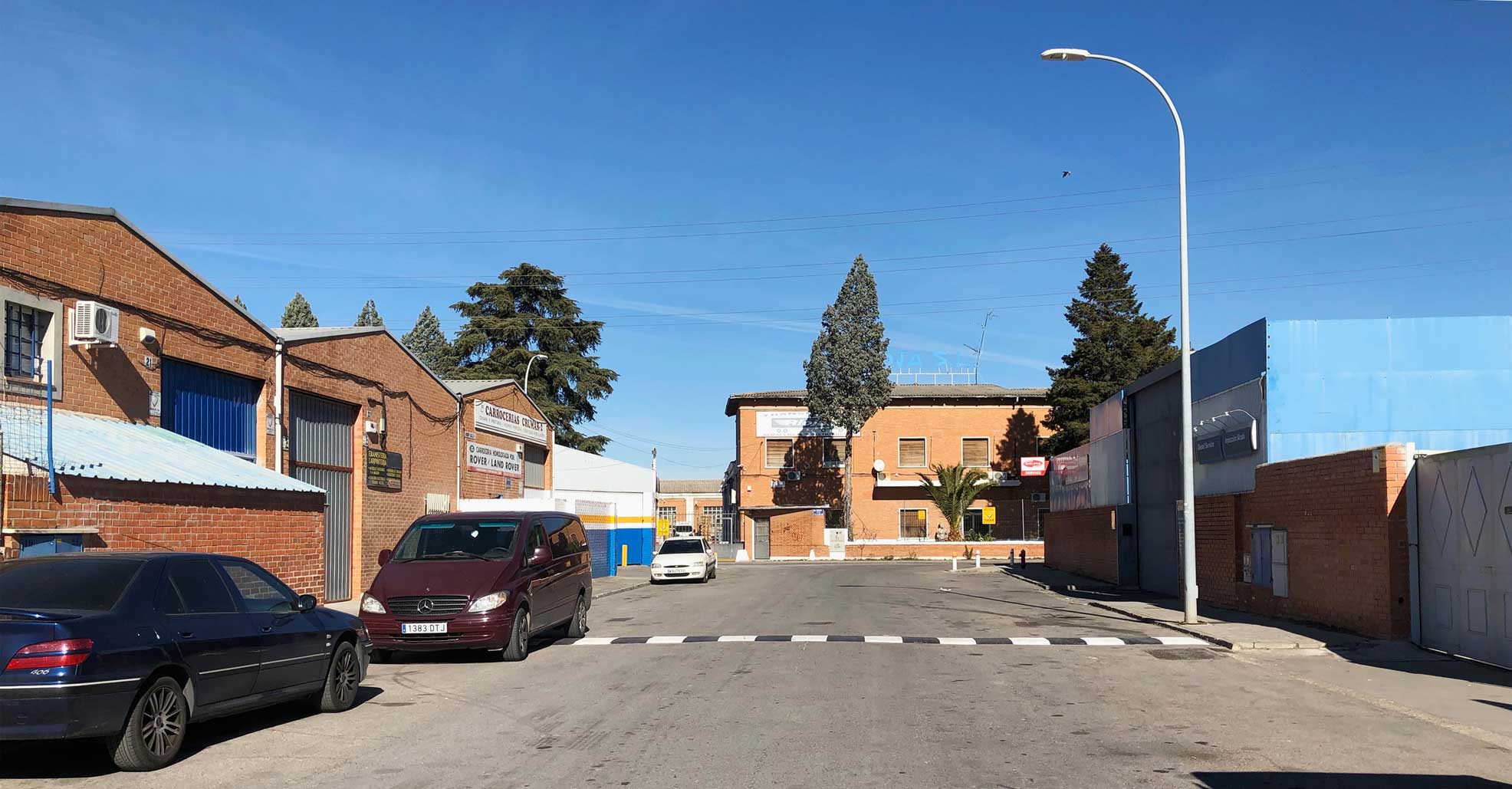 I got to know the Nigerian community in Madrid by playing Afrobeat music in the underground scene. I once rehearsed at one of the many Nigerian churches in the Spanish capital, and that’s where I first met Amos, the pastor. Our paths wouldn’t cross again till over a decade later, and it was thanks to our mutual friend Erik, another Californian living in Spain, that we met again. He and Amos have a band together called Soul Lift and every Sunday at church, they play gospel in between sermons. 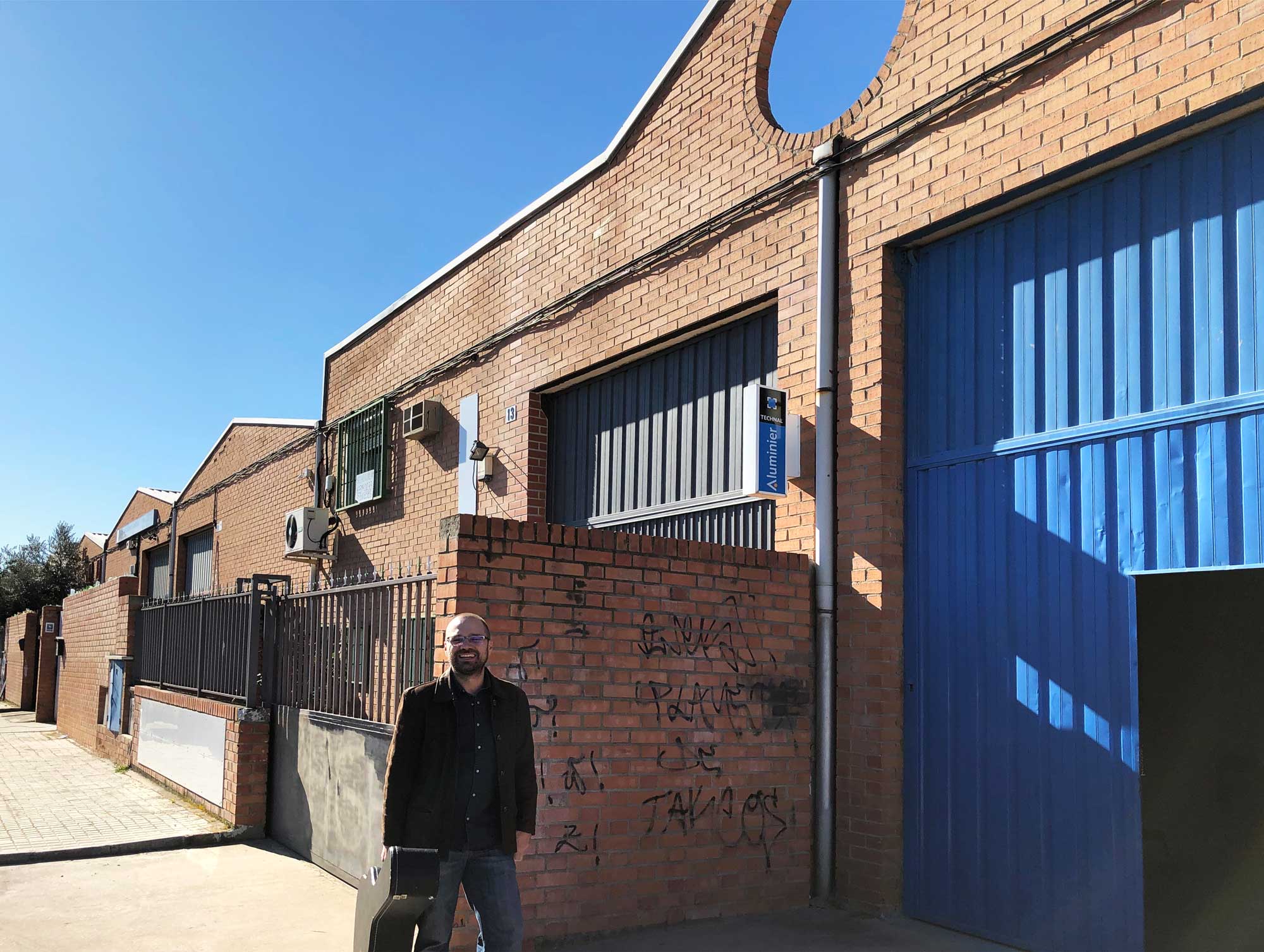 When I first walked through that bright blue gate, I distinctly remember feeling a special glow in the hidden indoor space – it contrasted sharply with the raw, barren feel of the industrial landscape. The atmosphere in the church has a sense of community that would be hard to find anywhere nearby. 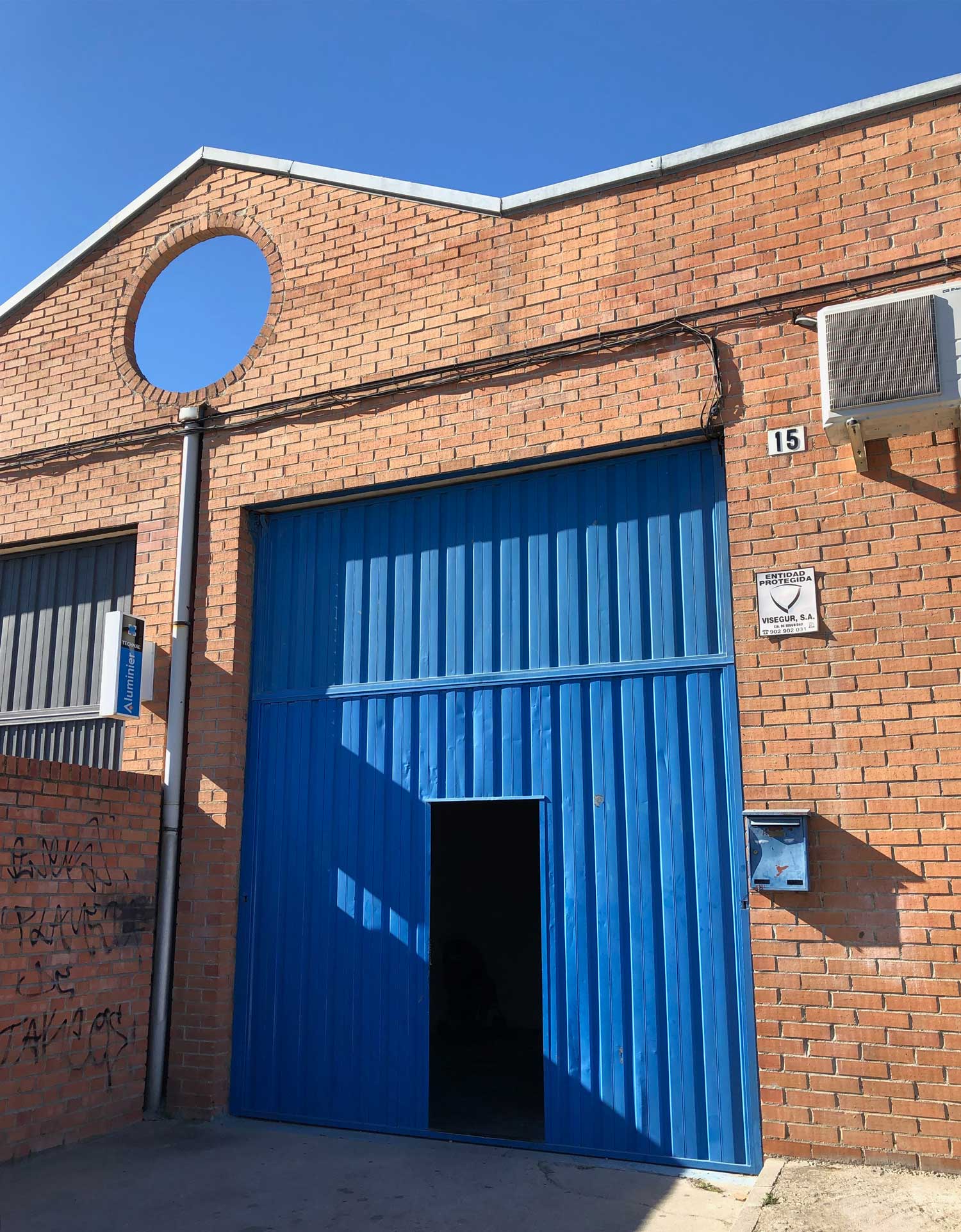 The church was packed and hot. Half a dozen heaters were evenly dispersed throughout the church, warming a crowd of people dressed in a mixture of styles. Some sported trendy urban clothes, others wore vibrant traditional dress. 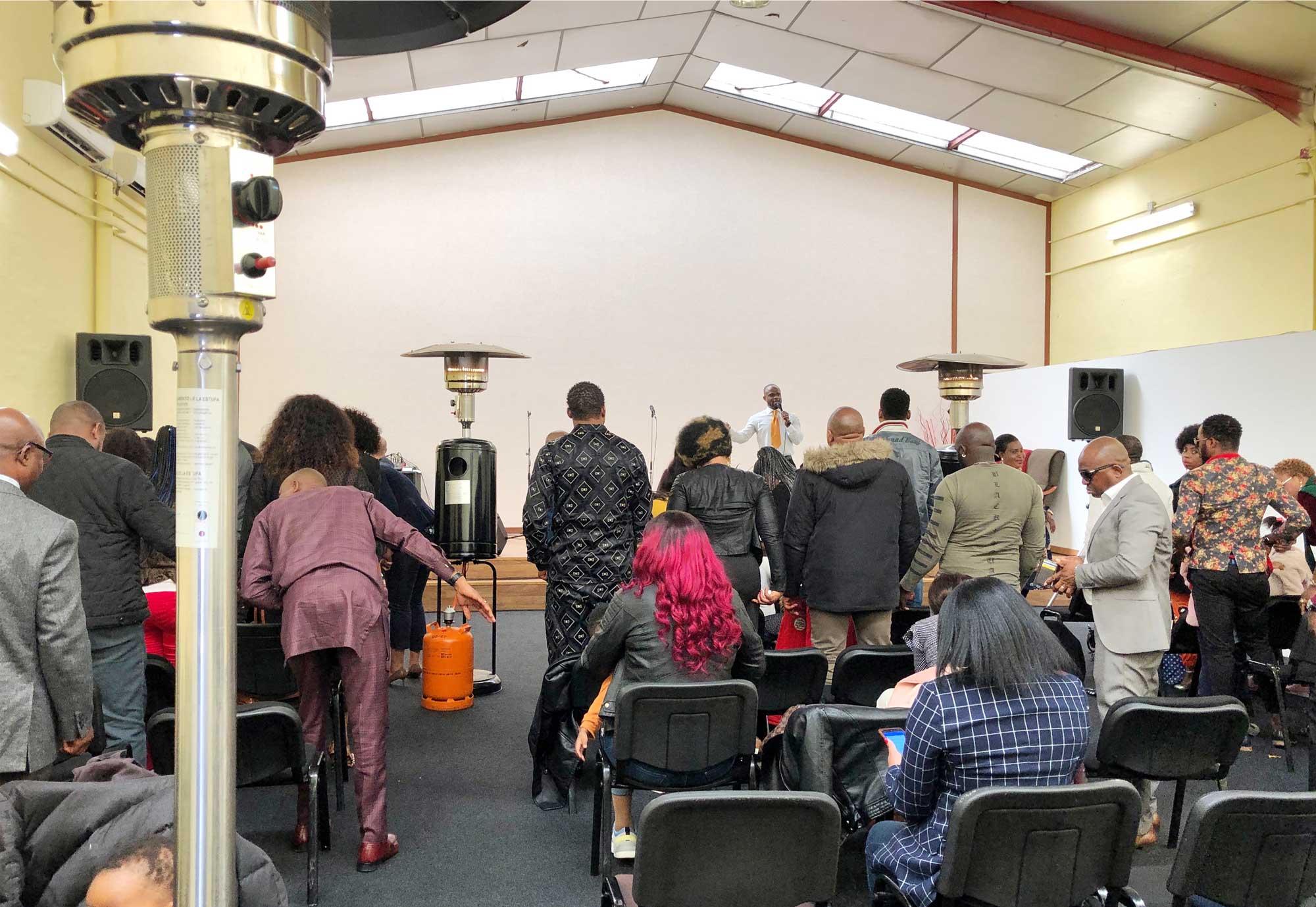 The church, as Amos explained to me, is not only a place of worship: it’s a community centre that hosts celebrations, reunions and talks about anything from love and sex to business and finance. As Amos says, a Nigerian church is where both the wedding ceremony and reception take place. Festive gatherings of hundreds of people could easily sing and chant till well past midnight. It’s no wonder, therefore, that the church is located in the outskirts of town – this way, the noise won’t bother any neighbours. 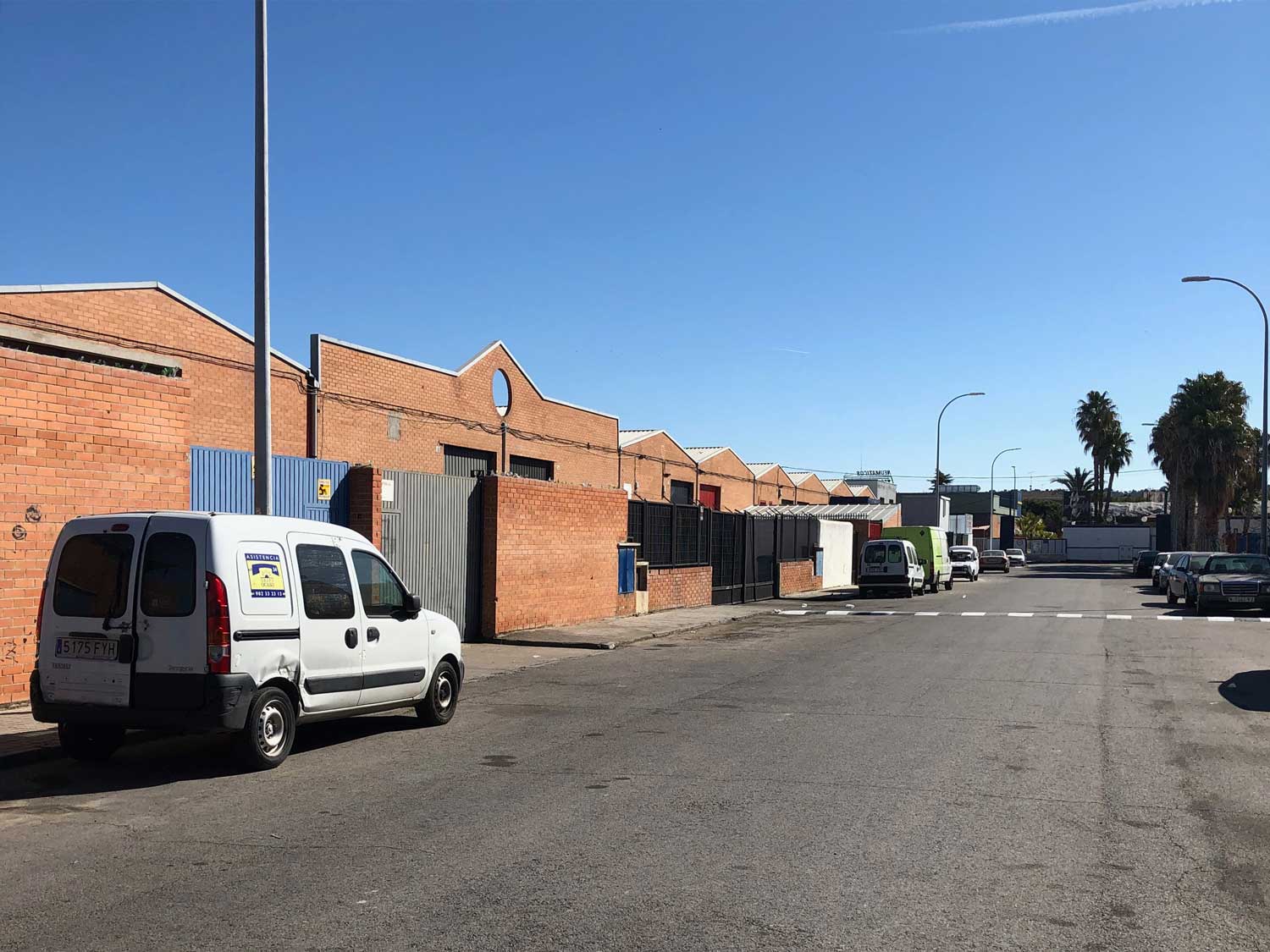 Today, they’d improvised a marriage counselling session instead of the regular service. There was a special reason for having a spontaneous counselling session on this particular Sunday – I did notice a certain urgency to it at the time – but I wouldn’t find out why until later.

The assembly lasted for well over two hours as everyone had a lot to say. I was initially surprised that they carried out the session in English because the Nigerians I know in Madrid, like Amos, speak in Yoruba amongst themselves. But, Nigeria is home to over 250 ethnic groups, each with their own language, so English, which was left behind by Britain’s colonisation of the country, is Nigeria’s most all-inclusive language.

The core of the discussion revolved around the types of problems facing Nigerian marriages in Spain. A variety of opinions were expressed – some applauded, others booed, and others came off as so outlandish and sexist that they were met with derisive laughter. It was generally agreed that a lack of respect for one’s spouse and family was a driving force in breaking up a marriage, but another important factor seemed to be the difficulty in reconciling certain Nigerian gender norms with those of Spain. 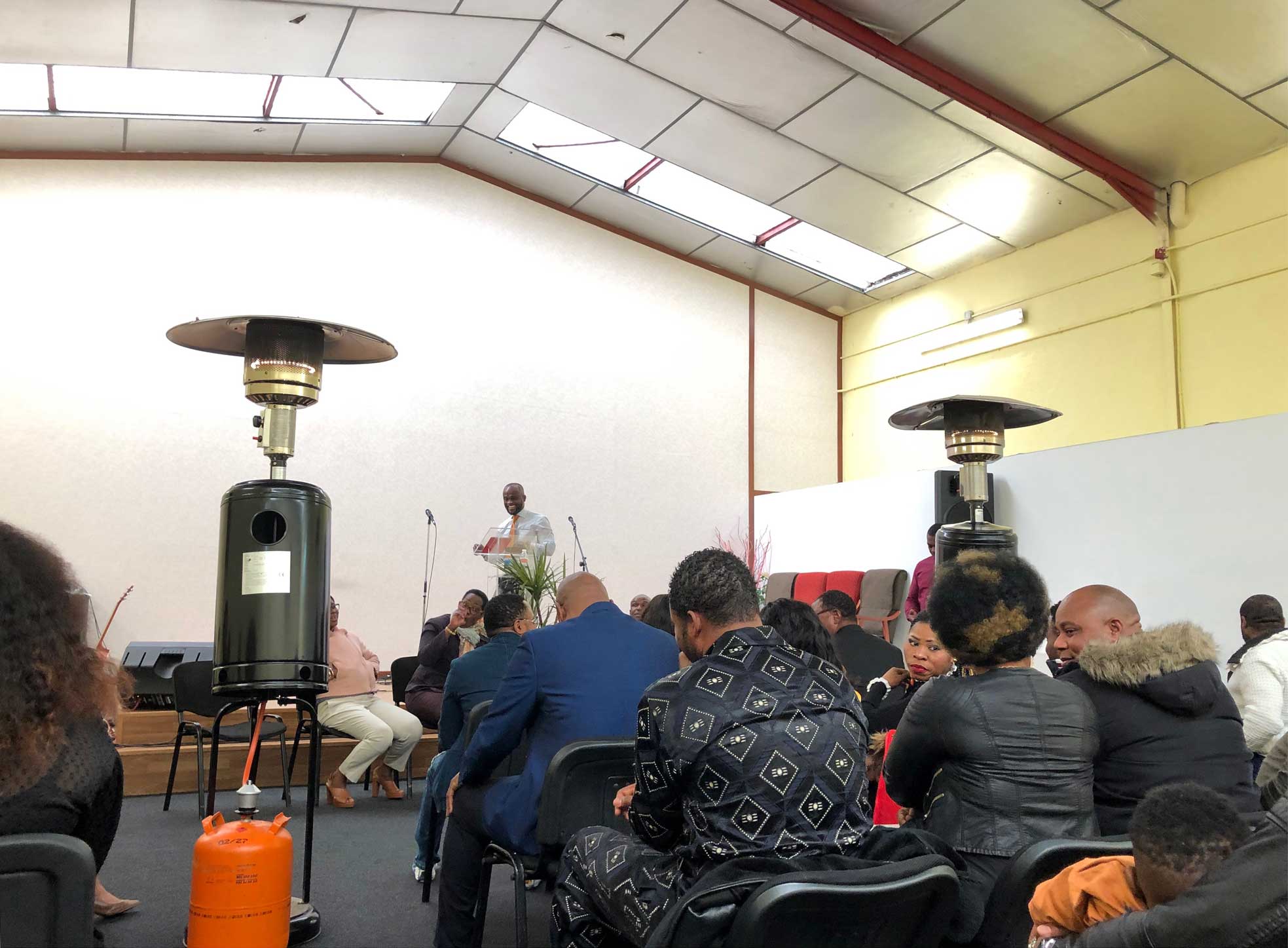 For example, quite a few complained about having to work all day while their spouses did nothing. Some women were indignant, not because of their partner’s trouble finding a job, but because of how they themselves were still expected to carry out the household chores after a long day at work – just for being women – and some men deemed helping out around the house to be beneath them. Between chuckles, Amos mentioned to me that he’d dealt with cases in which a man’s family humiliated him for doing housework, criticising their wife for making them do it.

It seems that these patriarchal norms plague countries worldwide. What became clear however, was that women increasingly feel empowered to express their discontent, with the consensus being that both men and women could and should walk away from marriages that don’t work.

Amos told me that while the divorce rate is skyrocketing in Nigeria, it’s still easier to get divorced in Spain, partly due to social programs that provide financial aid to women with children. In Nigeria, he says, many people get married and have kids out of social pressure. If things don’t go well, they often find themselves trapped because they simply can’t afford to live separately while taking care of the children. 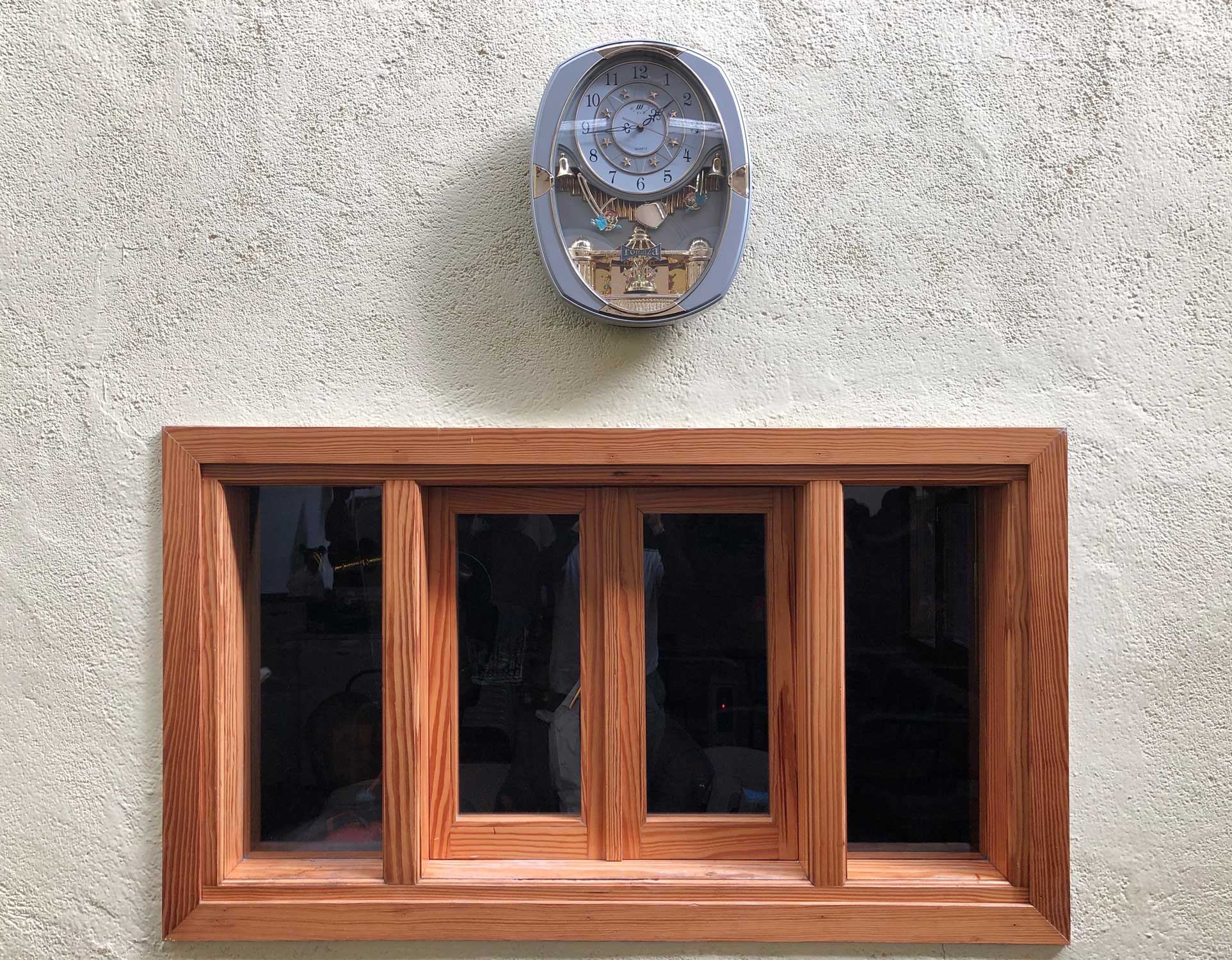 It turned out there had been quite a few divorces within the church recently, leaving some members in fear that their tightly knit community might break up. The option for an easier divorce was seen as both liberating and threatening. While Amos quietly embraces this new trend – “not everyone is wired for marriage,” he says – he doesn’t want people to give up so easily either. Some marriages can be salvaged if things are properly discussed, and certain expectations can be cast aside. 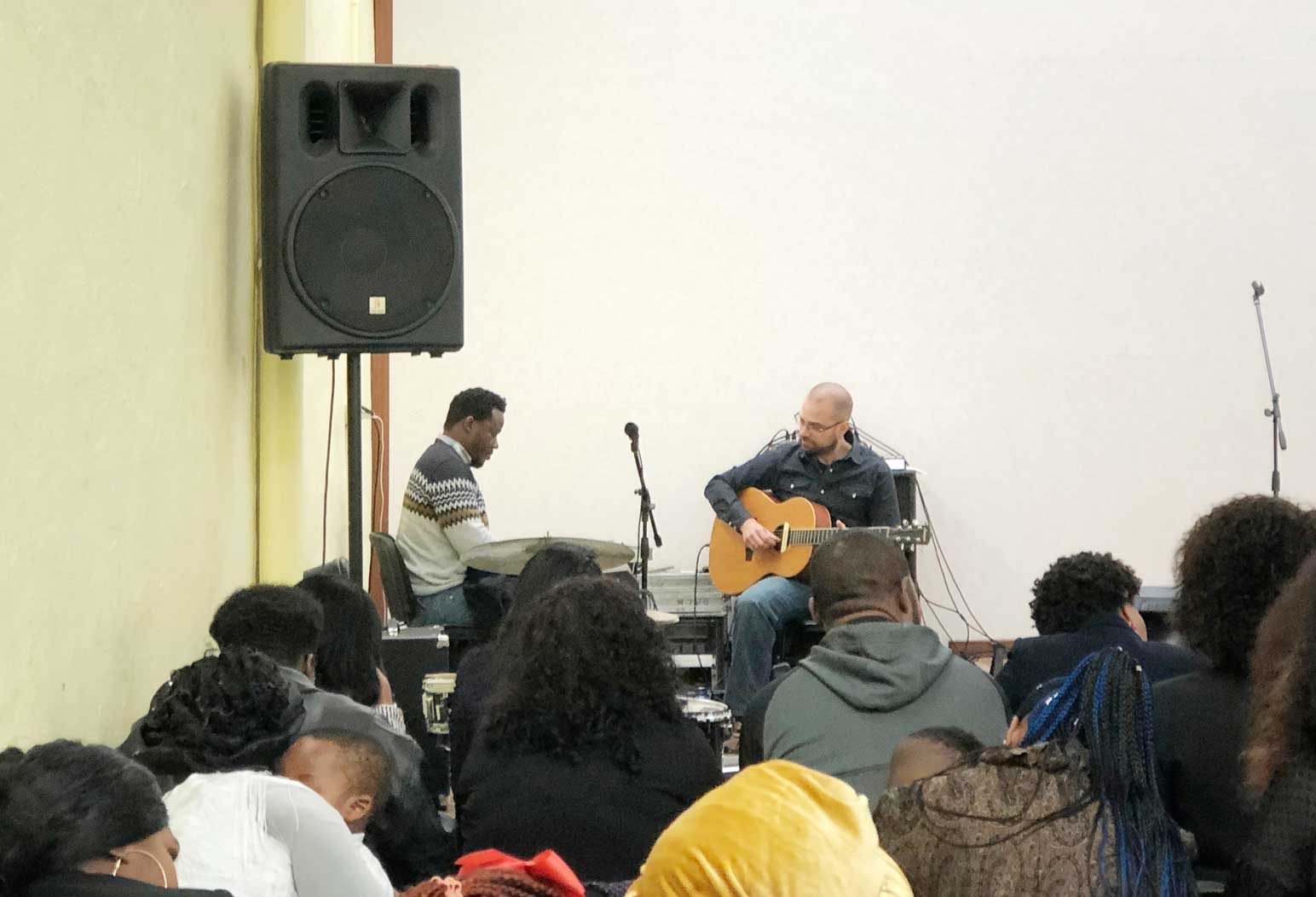 The Nigerian church in the industrial unit plays a crucial role in keeping its members united. I can only imagine the struggles of a community who, out of necessity, leave their country and head to one so vastly different from their own, which is not always as welcoming as they’d hoped, as Senegalese ex-mantero Laye experienced.

Here’s my friend Erik, alongside Amos in the middle, and another member of the church: 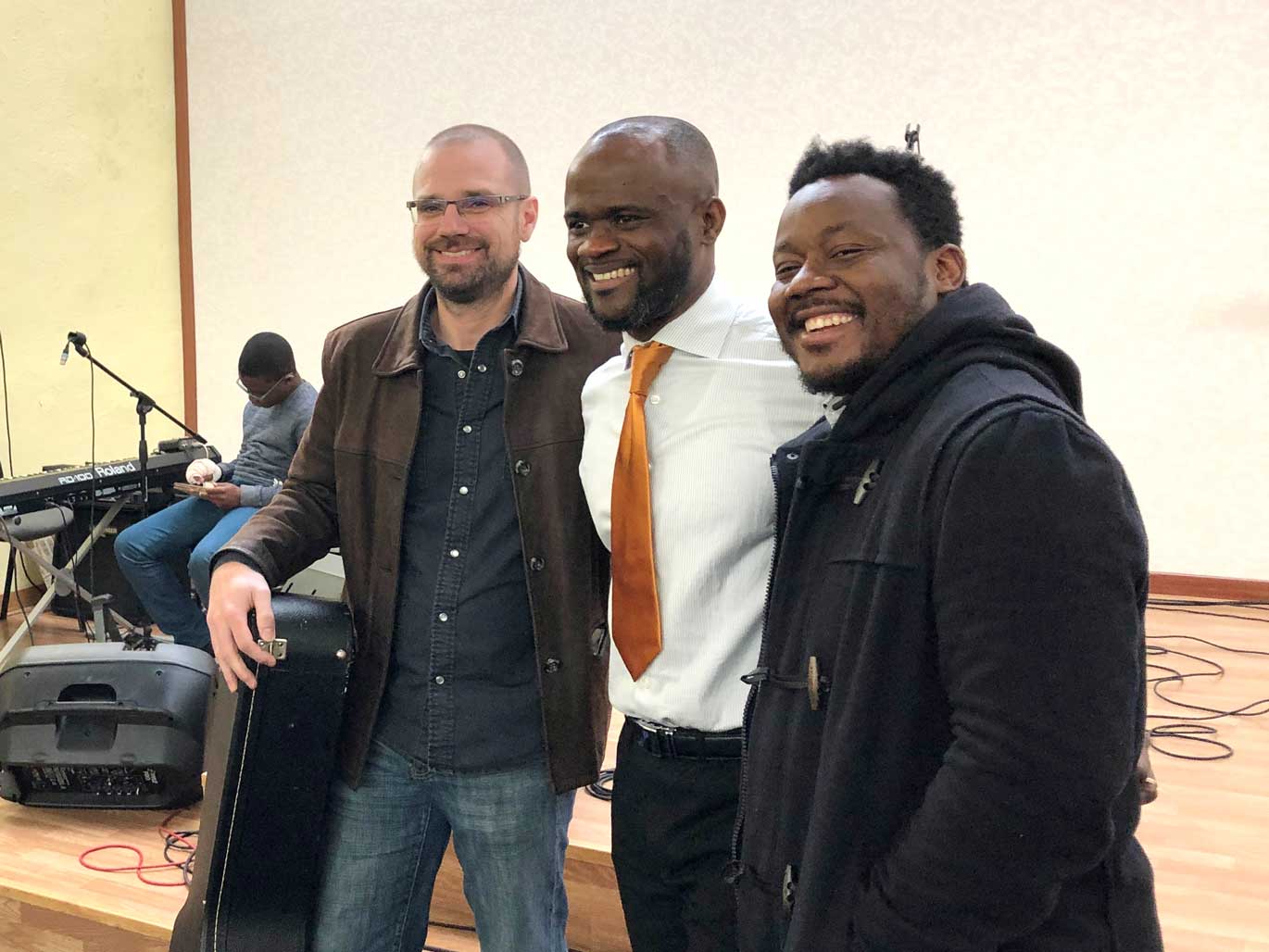 As with any church belonging to the vast network of Madrid’s Nigerian community centers, sermons are passionate and musical, overflowing with religious fervour and devotion. Sticking together is vital, and it’s people like Amos who work hard to maintain those strong bonds, allowing his community to not only survive here, but thrive here.

This article was written by Isaac Shamam, our expert on Madrid’s thriving underground music scene.

The Nigerian church in the industrial outskirts of Madrid was last modified: October 10th, 2020 by Isaac Shamam
Share:
Previous Post

God bless you sir, i am Emeka Agboje from Nigeria. i love your ministry. Please am writing a book the Lord gave to me. It is very inspirational for the body of Christ.
Please i want you to be a part of the project. Thank you sir.
My email (emekasagboje@yahoo.com)
(+234 8066272208).
Thank you sir,

Dear Pastor Amos, I am so thrilled by your pastoral service to the Nigerian community in Madrid.I am reading about from Cairo. Could you please provide your email as I would like to have further discussion with you.
God Bless you richly.

Where is the location of the church, I’m looking for living church here in Madrid Spain thanks