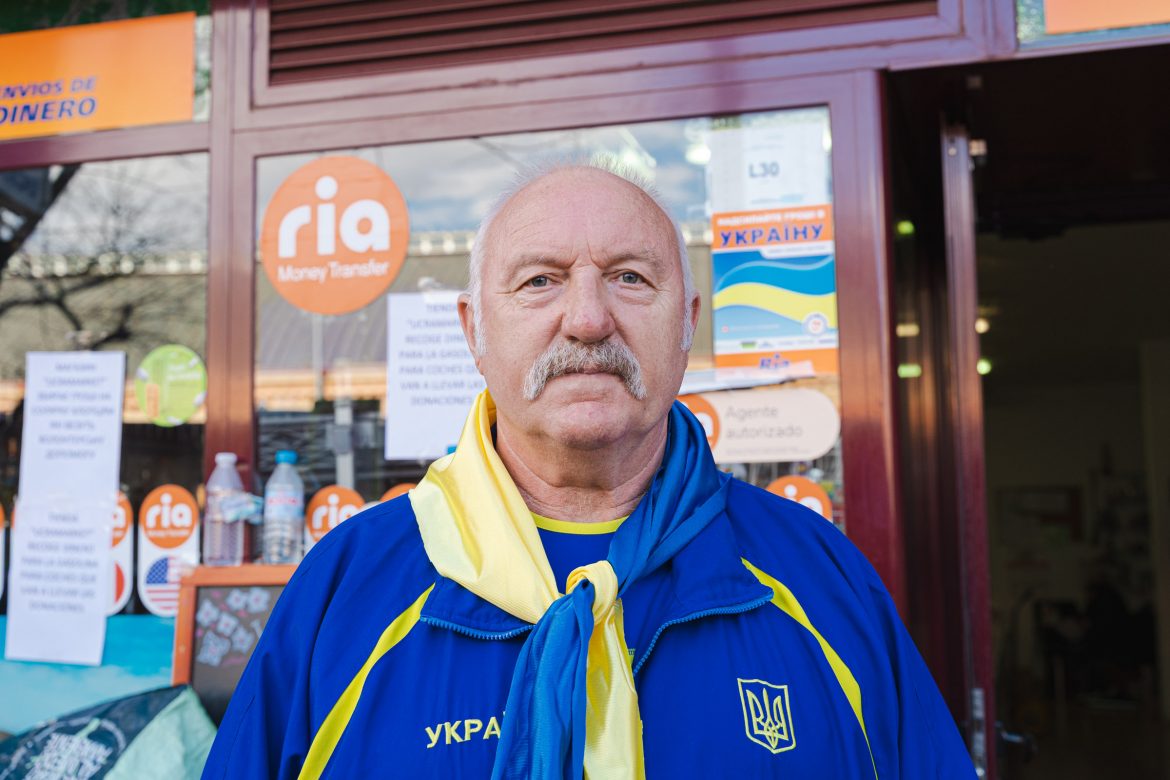 Immediately opposite Madrid’s iconic Atocha Station is a small, narrow shop selling niche products from Eastern Europe. Ucramarket is one of the most important hubs for the Ukrainian community in Madrid and, in just one week, it’s also become a collection point for donations from madrileñes destined for Ukraine.

The scene is busy and hectic. Dozens of Ukrainians, Eastern Europeans and madrileñes with various nationalities are receiving bags – some stuffed full of medicine, and others heavy with tinned food. Repurposed cardboard boxes from Ucramarket’s products are stacked on the pavement ready to be packed into vans by the strongest of volunteers for the 30-hour drive to Ukraine.

The volunteers try to keep busy. They’re focused on their community both here in Spain and in Ukraine but, despite enjoying small breaks to enjoy refreshments provided by the no-frills bar next door, nobody is able to shake the feeling of worry. Between giving instructions to volunteers and dealing with bags of vitamins, Ludmila Krasko begins telling me she has five children and 12 grandchildren in Ukraine.

“They cry a lot, they are extremely worried. A lot of bad things happen during war. Right now, everything is peaceful in our hometown, but tomorrow we don’t know. Some of my family and friends wish to leave, but men have to stay [for military conscription], while others are feeling very patriotic and have chosen to stay and fight.”

On the phone earlier that day, I spoke to Ivanna Vatamanyuk. “I’m sorry I’m so emotional today, but this is an incredibly hard situation for me,” she explains, before apologising again for taking another call. Ivanna has been living in Madrid for 20 years after an economic crisis hit her hometown, Chernivtshi, a historical city in southwest Ukraine. Ivanna feels deeply connected to her roots and, in 2008, she founded the Association of Ukrainian Parents (Asociación de padres ucranianos), which focuses on the wellbeing of children within and beyond Ukraine’s borders.

“We’re currently accepting donations to help children: displaced children, those newly orphaned, disabled children. Some of them don’t have documentation, some have family still in Ukraine, and some have already left the country.”

Ivanna has family in Ukraine and, even though they’re currently safe, uncertainty shapes her days. “It’s extremely stressful. Communication isn’t possible some days because of internet failures, so that affects us – those who are not there with our loved ones.”

Over 350 Ukrainian civilians, including 14 children, have been killed and more than 2,000 wounded since the Russian invasion in Ukraine began. According to the UN, one million people have fled Ukraine in the past week, most of whom are women and children, as well as many foreign students and migrant workers.

Yulia Zhyurkqte arrived in Madrid as a child at the turn of the millennium. Her family migrated to Spain from Lviv, as many Ukrainians did back then, driven by better work opportunities here in Spain. Yulia is also a member of Con Ucrania, a digital platform born out of Ukraine’s 2014 armed conflict in Crimea.

“Many Ukrainians in Madrid started organising during that crisis,” says Yulia, “and the community keeps growing. At the moment, we’re trying to respond as quickly as possible, coordinating aid from many fronts. We aim to distribute food and medicine, we contact people who are willing to travel to Ukraine’s borders to deliver humanitarian aid, and we organise translators who help us with verified information. We also support the platform for Ukrainians seeking refuge abroad and for those who can provide it.”

Yulia tells me that her family still in Ukraine feels relatively safe near the Polish border. “We all feel shocked… indignation, constant nerves, but we all try to keep a cool head to be able to respond properly. We want to be functional, to work and keep people busy and optimistic. We would like there to be the greatest possible support from countries and governments, and for them to express their opposition to what Russia is doing, which is a violation of our rights and our independence.”

Around 112,000 Ukrainians live in Spain, according to data from the National Institute of Statistics. The greatest number (more than half) live in Madrid, followed by Barcelona, Alicante, and Malaga. The migration of Ukrainians to Spain started in the 1940s and increased during the 1980s, following the end of the Franco dictatorship, when Spanish liberal legislation suddenly regularised foreigners and integrated them into the workforce. During this time, support networks were established to preserve and enjoy traditions from back home, and to keep the Ukrainian language and culture thriving within the community.

In the queue waiting to deliver his donations is Yuri, a member of the Ukrainian Community of Spain. He is slightly agitated by the journalists who approach him. “I’m just tired, we have worked endless hours. So many journalists from Russia Today and Sputnik are interpreting it all wrong: this isn’t an armed conflict, it’s a war by Russia against the people of Ukraine. Putin will be judged as a war criminal and for crimes against humanity.” Yuri wipes away tears with his hand and apologises. “I’m sorry. It’s just too hard for me.”

Yuri is currently organizing the volunteers who wish to go to Ukraine to fight. Without revealing too many details, he tells me, “We organized a group of 35 Ukrainians who went back to our country to contribute. They have family in Ukraine, but also here, in Spain.” He explains that some of their wives are worried sick. Nobody really knows what to expect in Ukraine.

Inside the Ucramarket is Valentin Kilishynkyy, standing proudly with a flag wrapped around his neck. “I was born in a town 50km away from Chernobyl which was occupied by Russia on the first day of the war. I have no mother and father, but I do have sisters, family and friends in my hometown. I just feel profound sadness for my hometown, my memories and my friends who are still there.”

Gabriela Mesones Rojo is a Venezuelan journalist based in Madrid, specialising in gender issues, migration and human rights. You can follow her here.

Melanie Guil is an Argentinian photojournalist based in Madrid. She enjoys documenting the music scene and writing about arts and culture. You can follow her here.

How Madrid’s Ukrainian community are organising in response to Putin’s invasion was last modified: March 12th, 2022 by Madrid No Frills
Share:
Previous Post 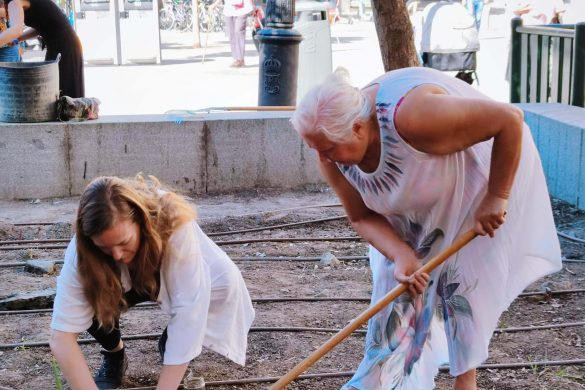