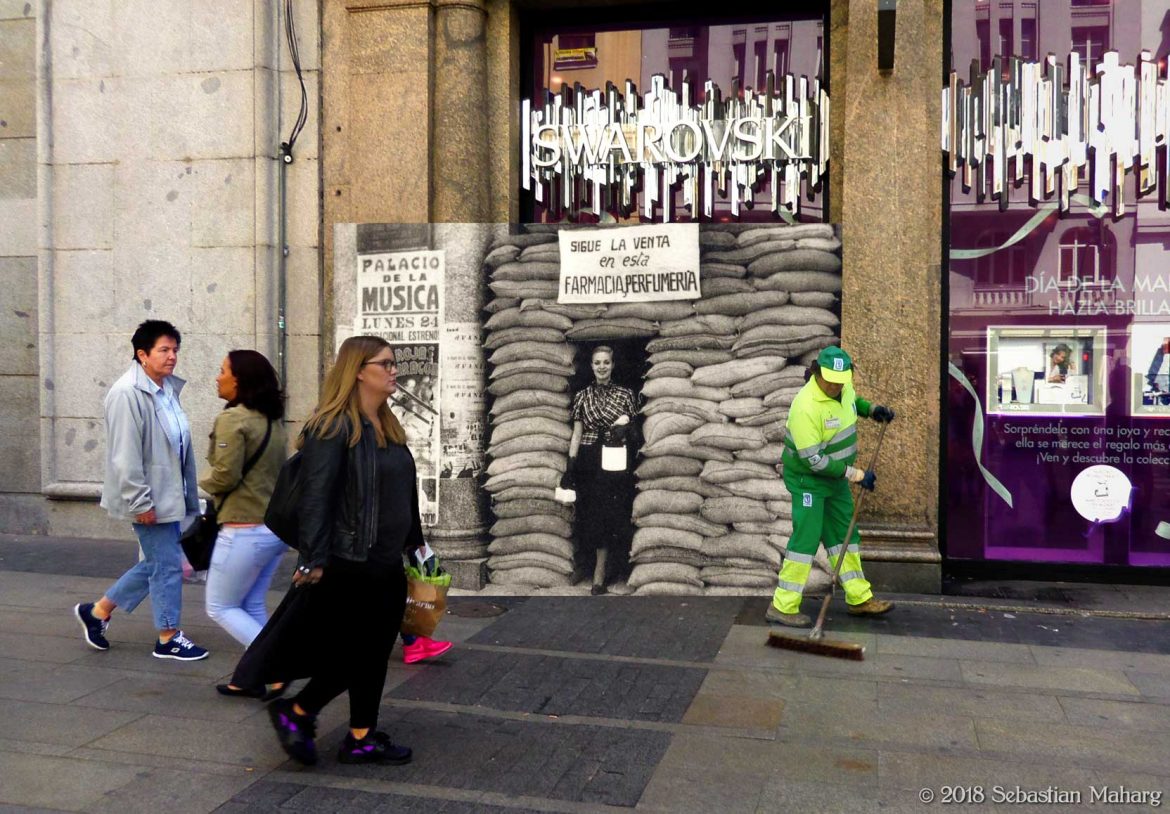 Hell’s bitter winds have suddenly reversed and the darkest visions of the Spanish Civil War have drifted back onto the streets of Madrid. And for this, we can thank Chicago-born artist Sebastian Maharg, who has made it possible for us to remember what many of us never even saw.

I want people to realise that this happened right here – closer than we think. It’s easy to look at an old, black and white photograph and be fairly detached  or unfazed by what’s in it. But, if that same photo is slotted into a context you walk by every day, then suddenly you’re a participant in that bit of history.

Sebastian Maharg, the creator of these powerful, inter-dimensional images, also revealed to me a personal story behind them:

My maternal grandfather fought in the war on the National side and was killed in action on January 21st, 1939, making it almost 80 years to the day. That certainly makes it hit home.

Spain still struggles to deal with what happened during the Spanish Civil War – the subject that Sebastian covers in his works. All of the vintage photographs featured in his images were taken between 1936 and 1939, during the fighting, and it doesn’t make easy viewing.

The Spanish Civil War and the subsequent dictatorship are still taboo subjects in many respects. There’s a pervasive attitude by most to just sweep it all under the carpet. Unlike in Italy and Germany, the Franco regime was never toppled, so the elite forged during the dictatorship was never purged and very much still held sway over policy on how to deal with the legacy of the Civil War after Franco’s death. That’s, of course, very one-sided, but today, we’re still seeing how these issues have never been properly resolved.

One example is the whole Valley of the Fallen question about where to bury Franco. There are those who still have family members buried in unmarked ditches on the sides of roads, while many streets and squares have been named after the men who were responsible for their deaths.

Passions still run high and putting aside the diverging stances on the war itself, ultimately the project is about people, not politics. I’d like my photographs to tell the story of ordinary folks coping in very dark times – we shouldn’t sweep that under the carpet. 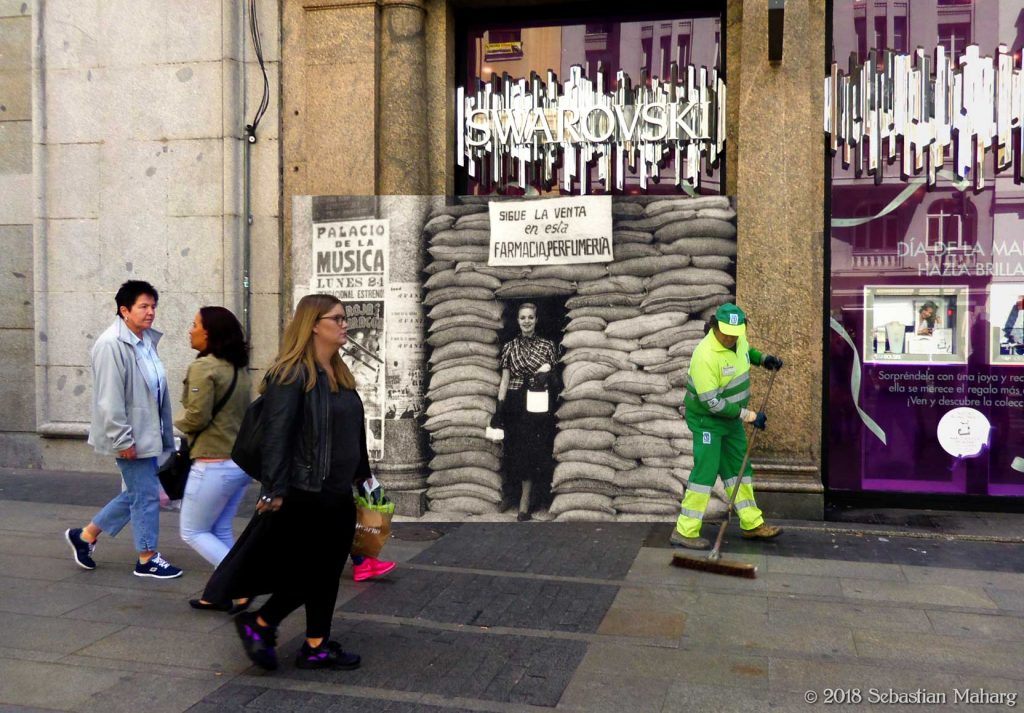 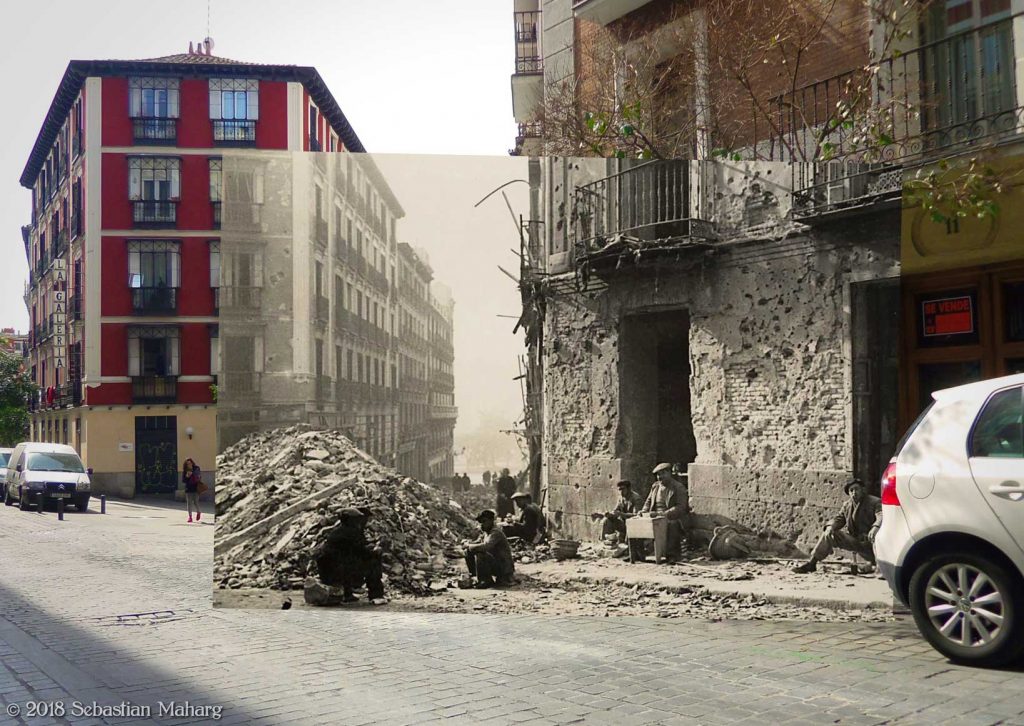 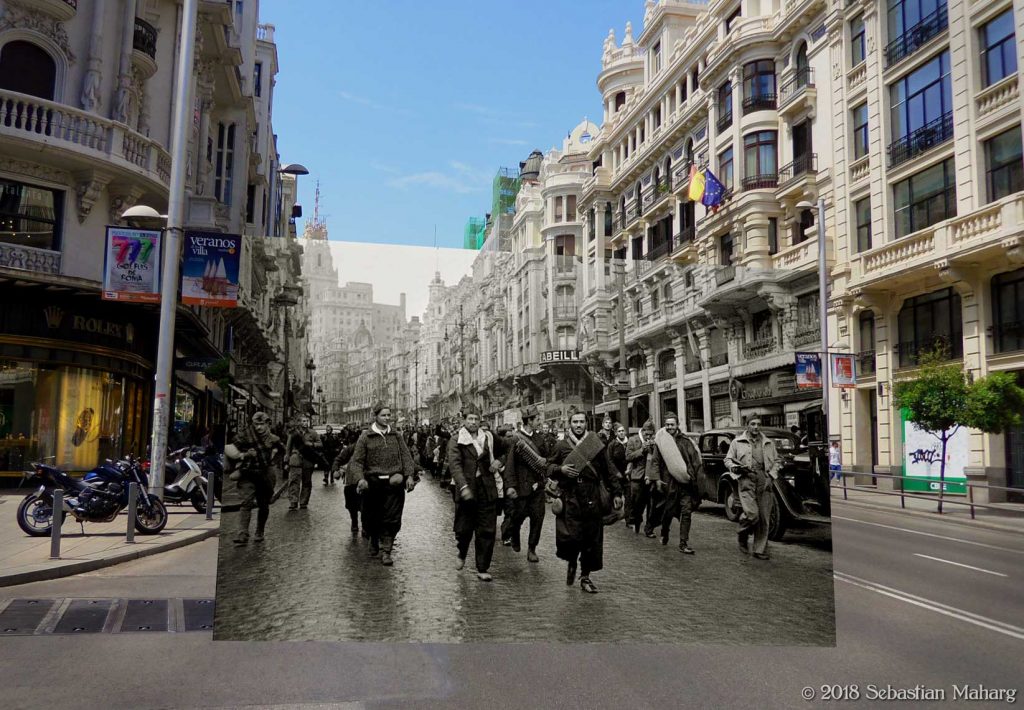 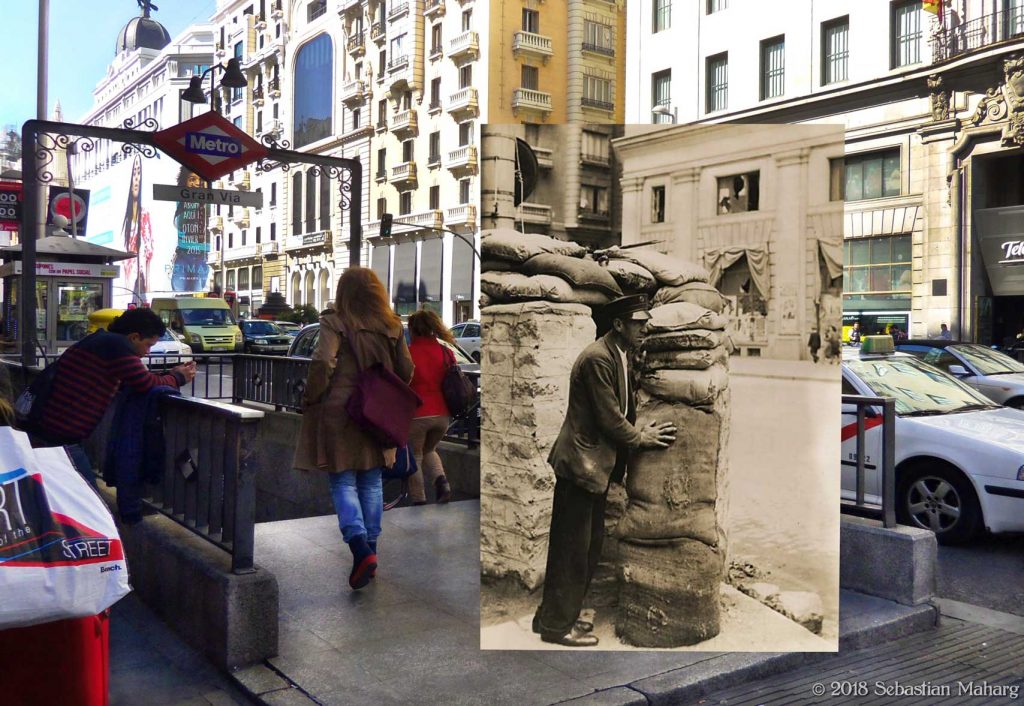 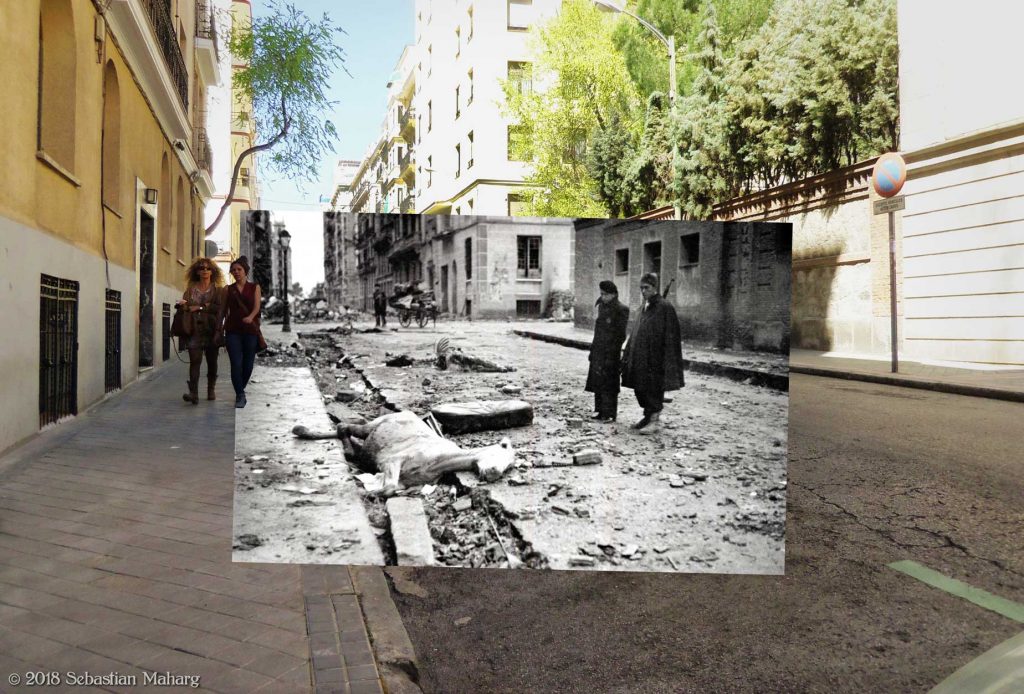 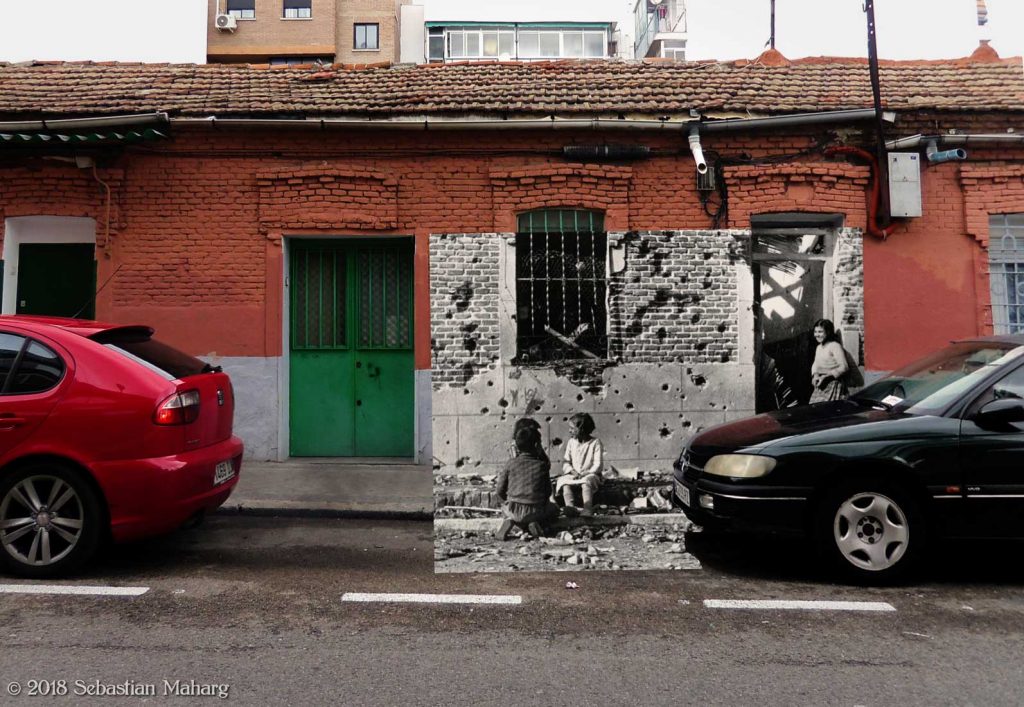 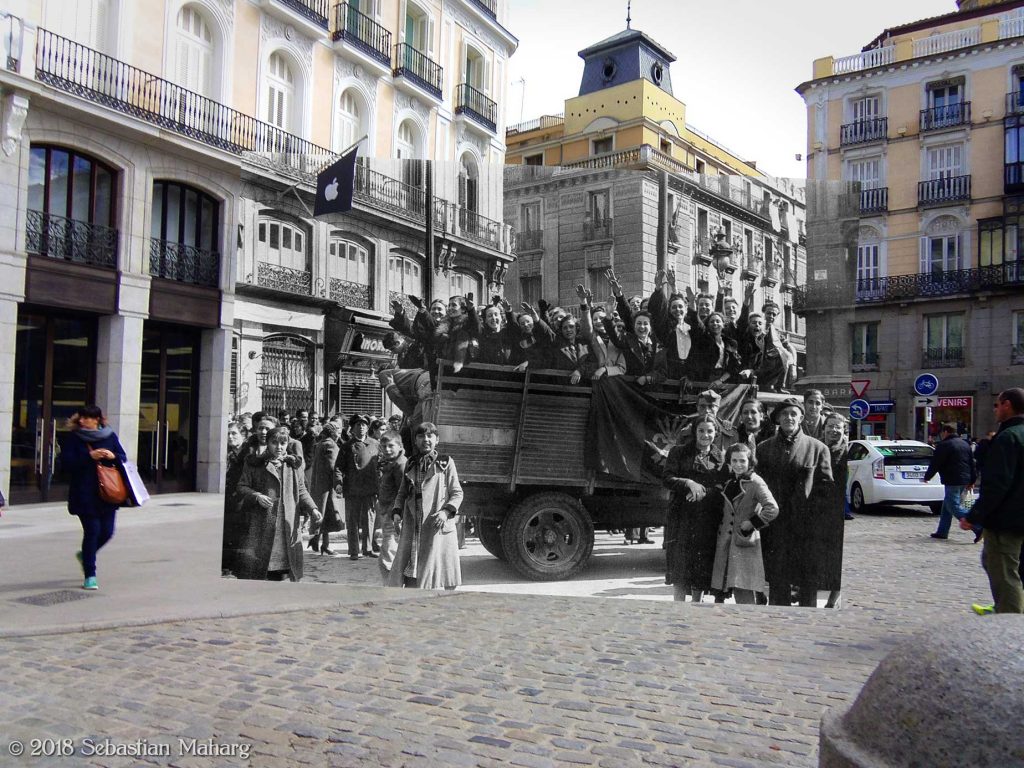 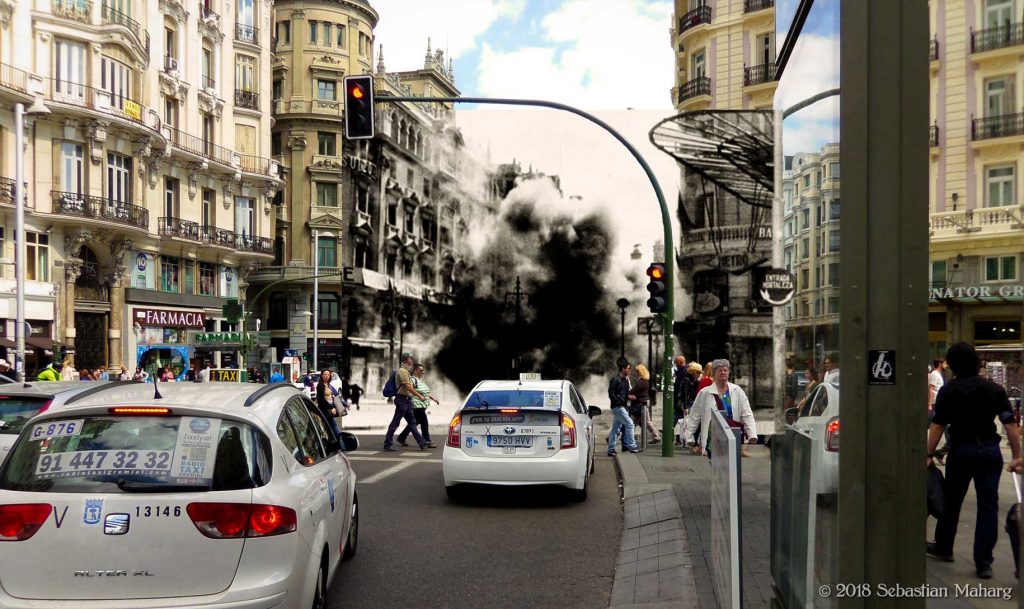 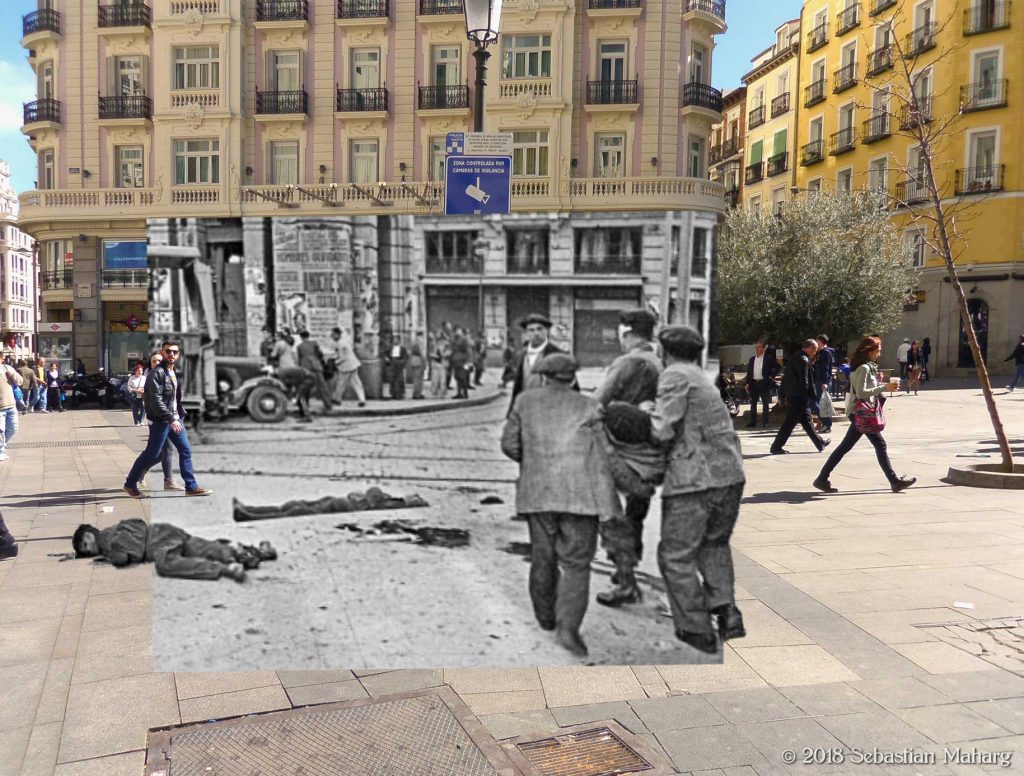 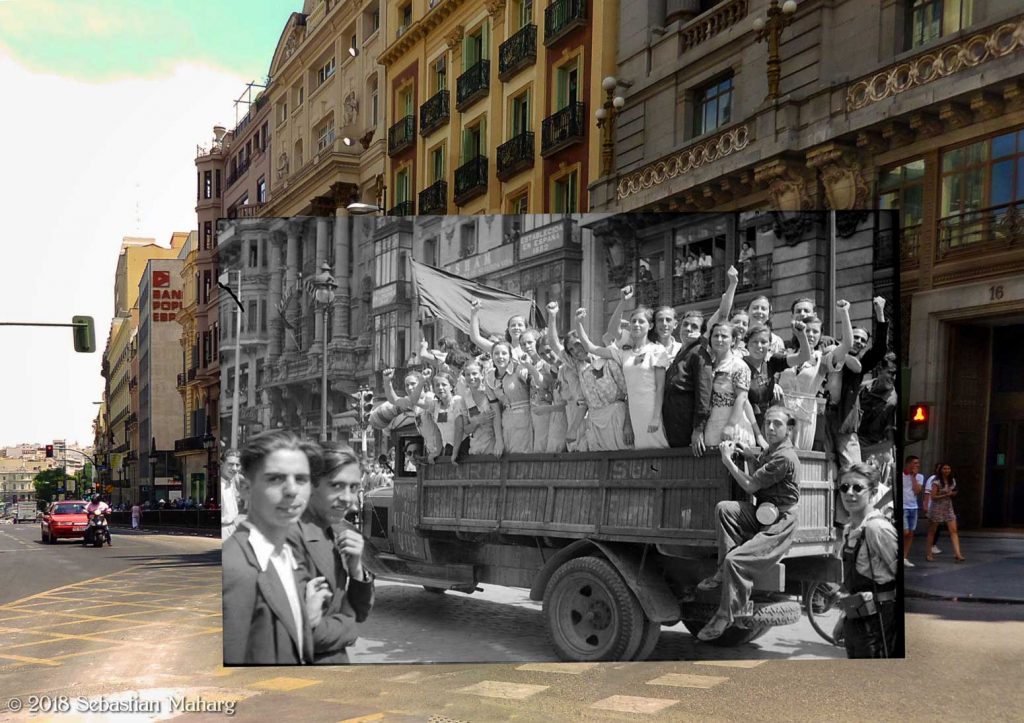 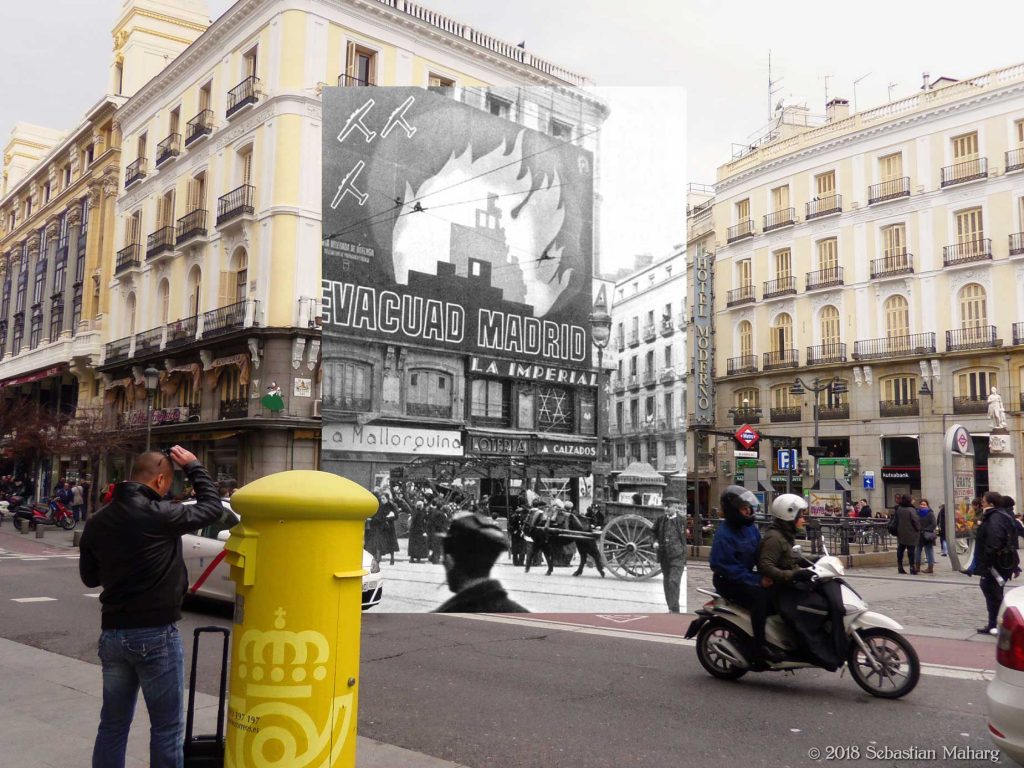 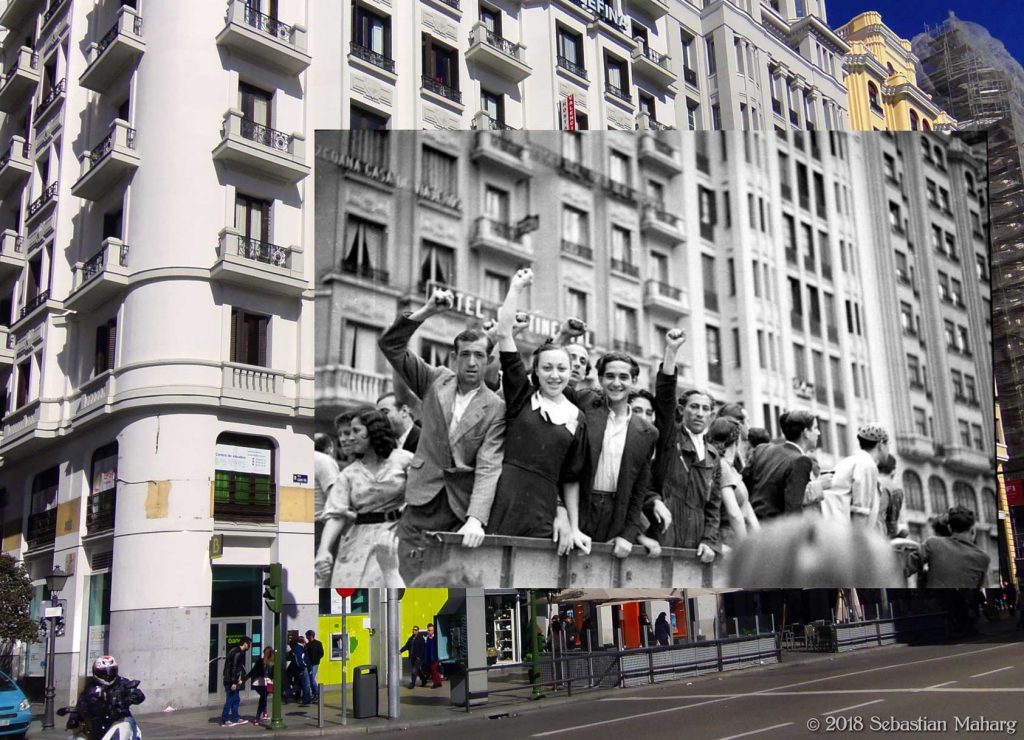 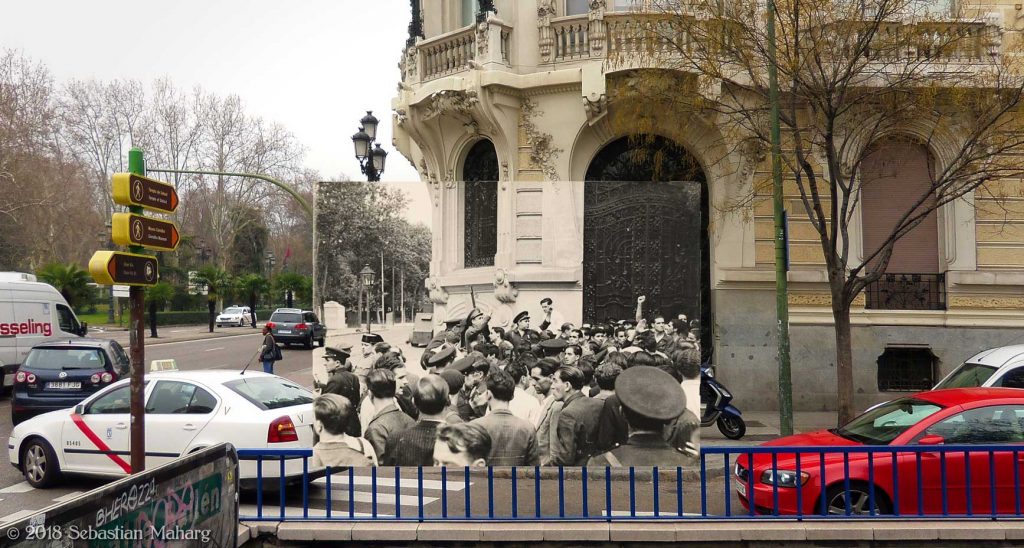 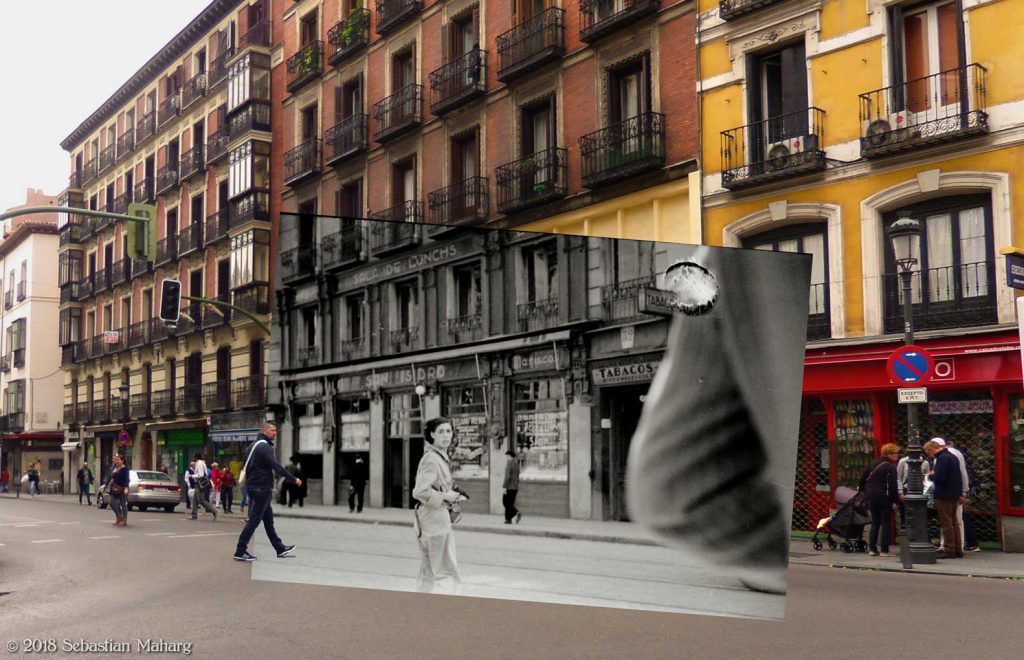 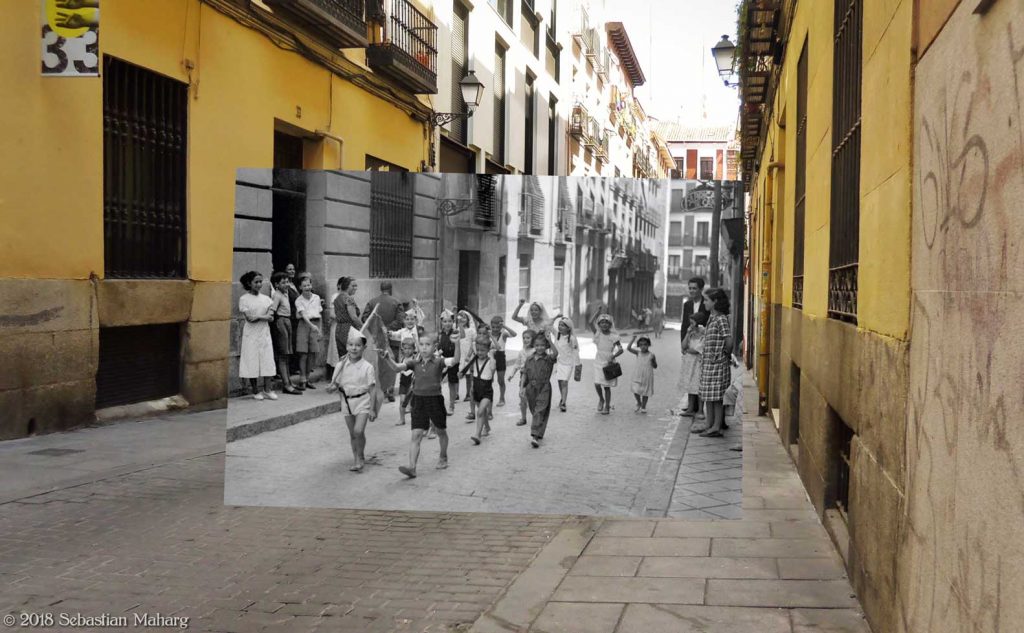 Artist brings the Spanish Civil War back to the streets of Madrid was last modified: September 25th, 2020 by Madrid No Frills
Share:
Previous Post

Hi Leah, I’ve only just subscribed to madridnofrills today so haven’t yet had the chance to explore the website that deeply but I really like what I’ve seen so far. I particularly like the “no frills” emphasis and the strong perspective you appear to give to history but also to the issues and politics of the present day, such as homelessness, for example. The Civil war photos superimposed on today’s settings by Sebastian Mahorg are amazing and truly bring the history alive. So many websites about Spain are aimed at people with plenty of money who can afford to splash out 100 euros on tapas tasting tours and expensive restaurants so it’s really refreshing to find one geared towards people who don’t necessarily have that kind of income, Madrilenos and visitors alike. One of the best things about visiting Spain is, of course, the bars and the incredible diversity of food and drinks available. Such a shame that the effects of globalisation and other factors are forcing so many to close down. These working people’s bars are, to me, simply heaven so I feel that it’s really important that as many as possible stay open and keep the culture and traditions of their particular barrios alive. Absolutely adore the 100 bars article, Bar Eutiquio looks great too. Unfortunately I live in London so don’t get to Spain as often as I would like (permanently, to be honest, sadly not possible at present) but am very glad to have discovered madridnofrills. Thanks very much, exactly the type of website I’ve been looking for. Hope you have plenty of fun and success with it.

Thanks so much, Michael, and for sharing with me how much you enjoy my work. It is indeed geared towards those with a lower income and who also want to explore the very real side of the city. If you’re ever in Madrid, I think you might enjoy pg 12 of the weekend guide that’s just found its way into your inbox 🙂

You've probably all heard that Wes Anderson is in

It's important to recognise and celebrate each ind

Our Latino community gets ready on the streets of