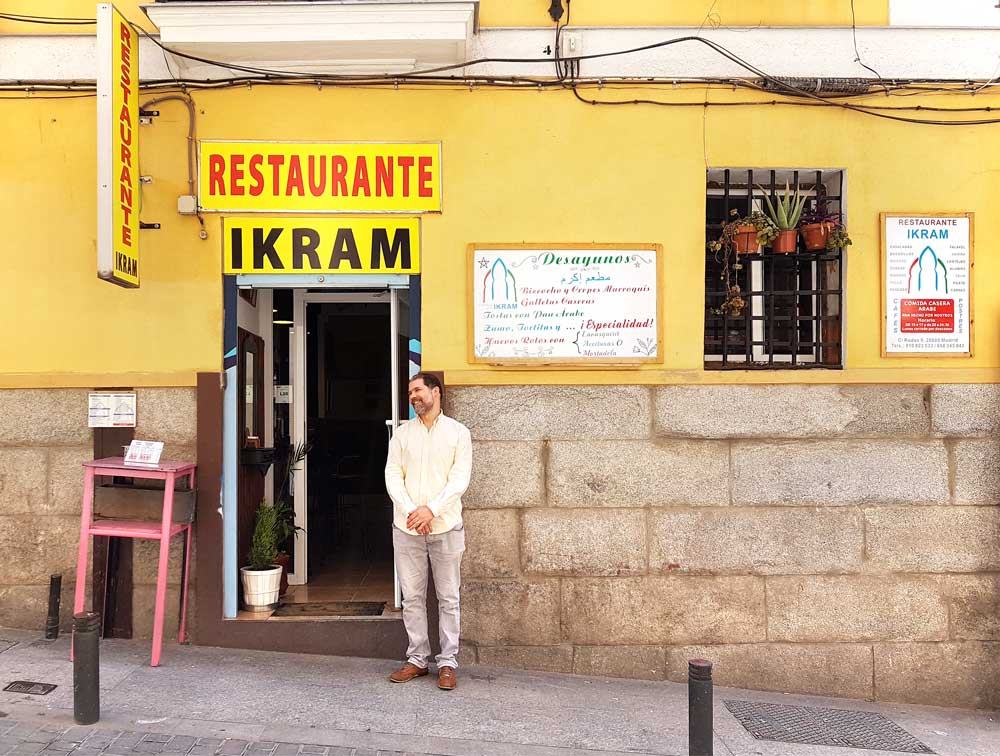 Mohamed serves really good Moroccan food, which he makes himself in his tiny kitchen at the back of the restaurant. The food at Ikram is even better than meals I’ve had in Morocco, and you’ll find it right here in the northernmost neighbourhood of Africa: Lavapiés. 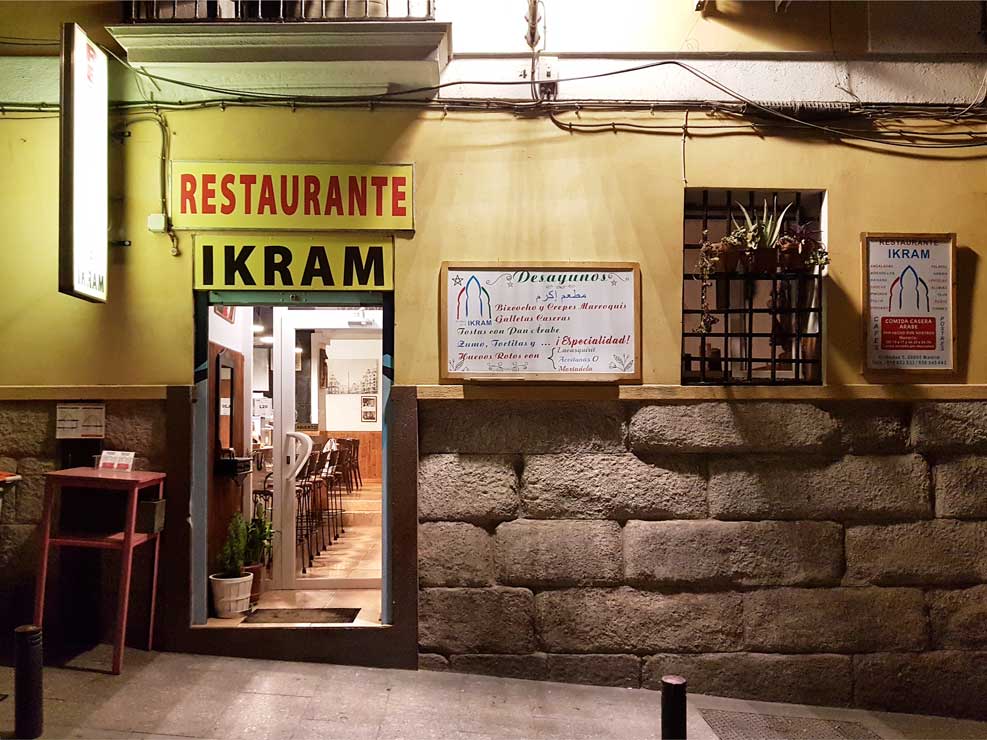 Food evokes nostalgia, and can often transport us back to a specific moment that we’ve let slip from the front our minds. At the sight of Mohamed’s bean and lentil dishes, I was transported back to Sidi Ifni in southern Morocco, where the dunes of the Sahara come face to face with the Atlantic. 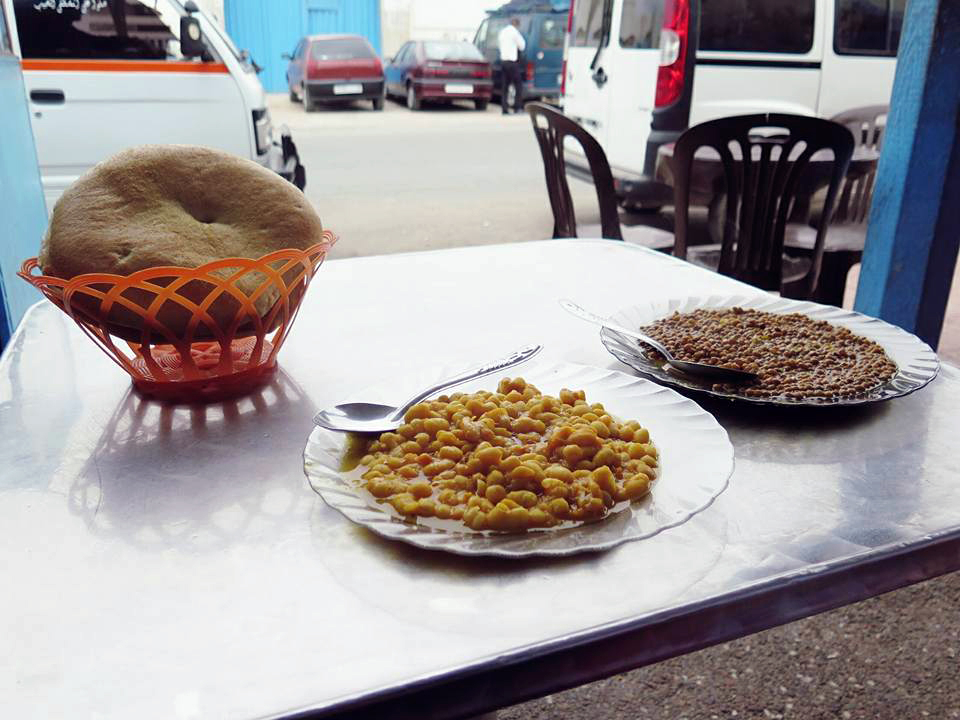 The little no-frills shack you see in the picture above – plastic chairs and all – straddled an abandoned airfield on the edge of the town. A man sitting next to us had parked his camel out back before taking his place at the only other table in the ‘snack bar’. He ordered a plate of lentils, bread and mint tea just as we had done (well, there was nothing else on the menu), but I’ll also never forget his bright blue eyes – many people in this part of Morocco are Berber.

IN THE HEART OF EL RASTRO

Back in Lavapiés, Restaurante Ikram is run by Mohamed, who’s from a small village in the province of Larache, in northern Morocco. He opened up Ikram a year ago and has a small but loyal group of regular customers, who have all given him five-star reviews on Google and Trip Advisor. And now it’s my turn… 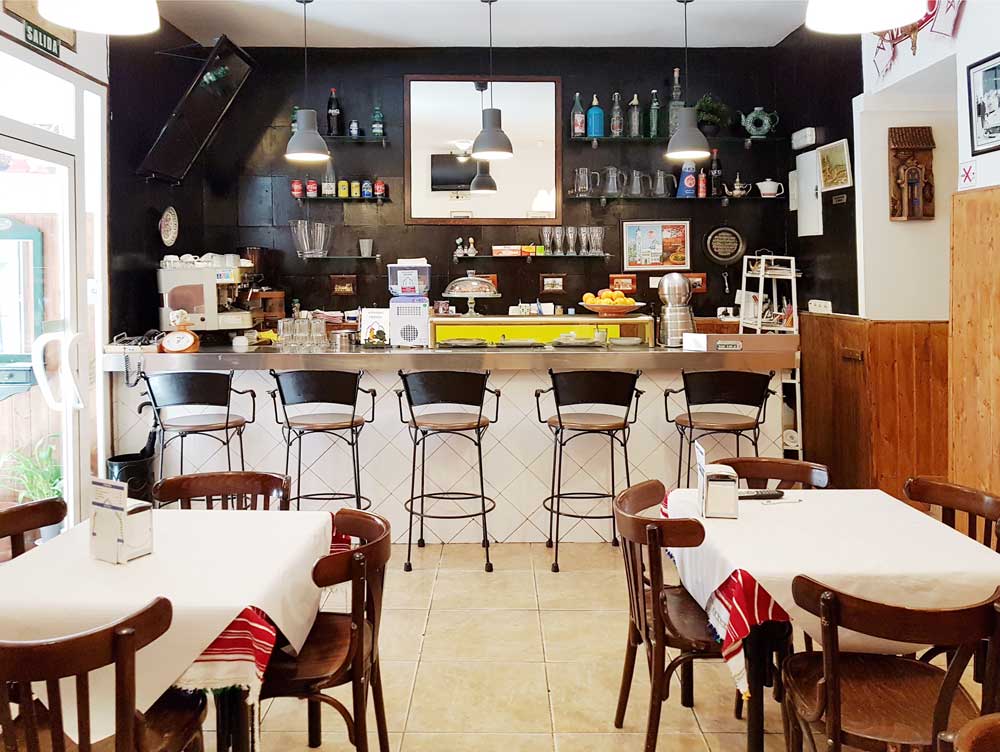 Apart from the typical couscous dishes and tagines, Mohamed has created a slightly fusion menu, taking in recipes from various parts of the Mediterranean and the Middle East, as well as a selection of classic bocadillos, which are popular on Sundays during El Rastro. 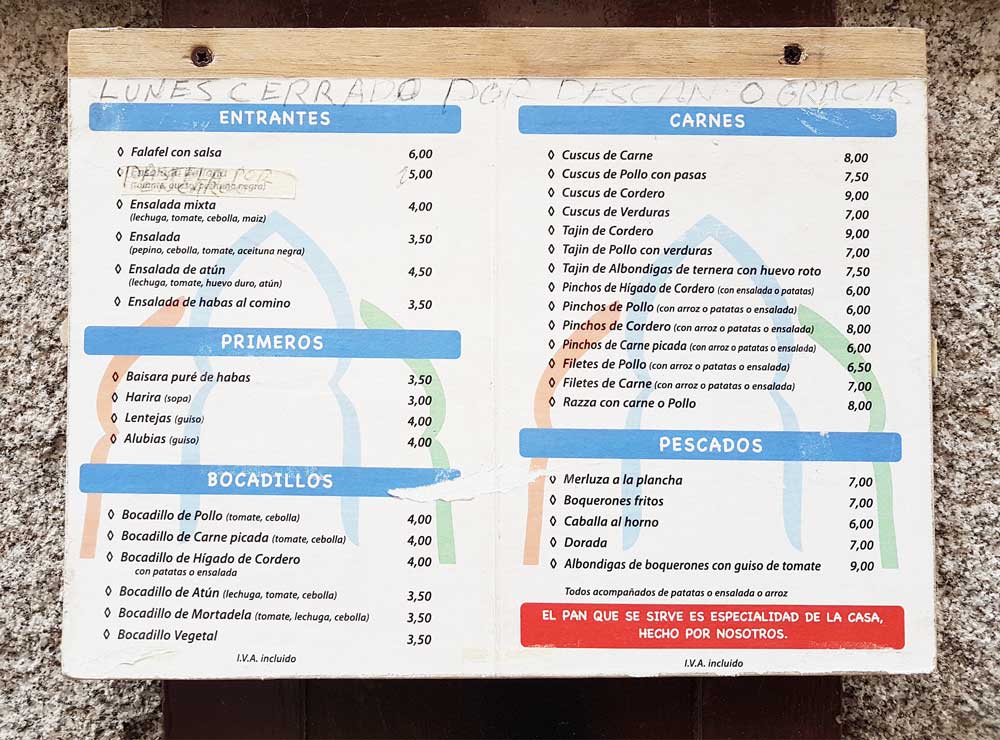 The fish balls made with boquerones are delicious, as are the subtly spiced chicken skewers and piping-hot falafel. The bean and lentil dishes are identical to the photo in Sidi Ifni above and are similarly unsalty, a quality I wouldn’t normally expect in Madrid. 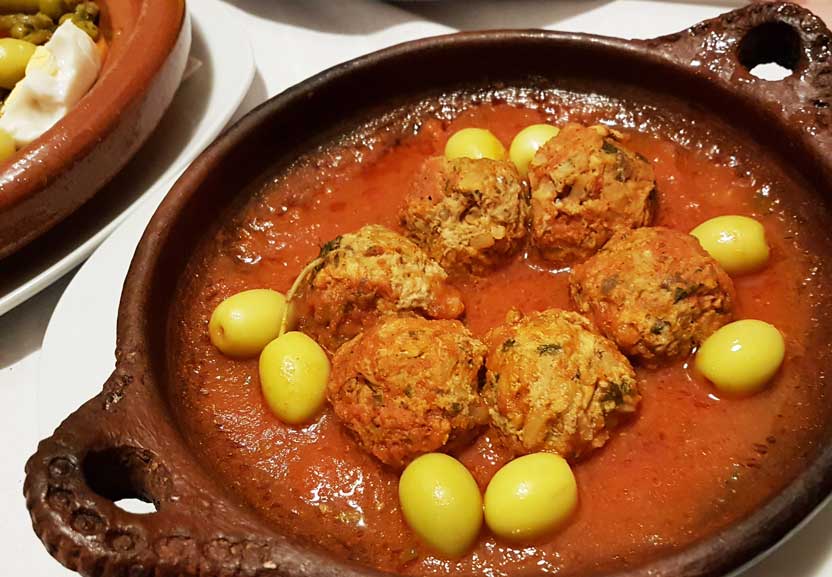 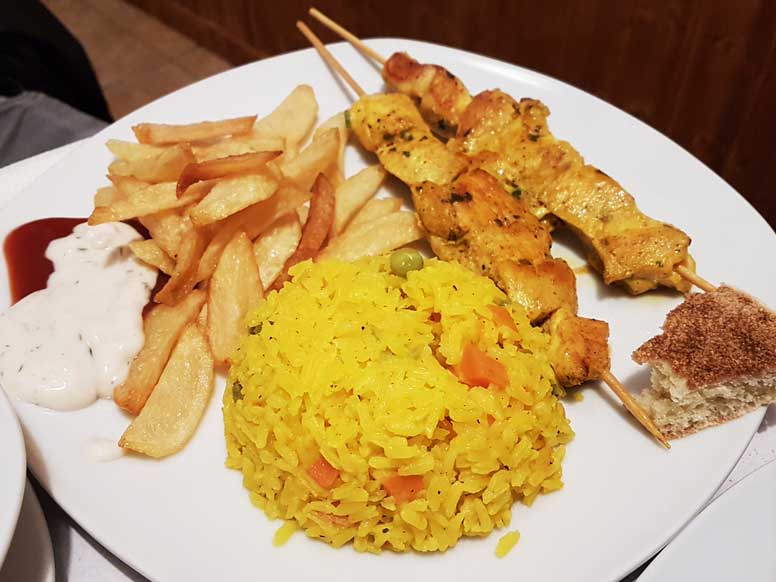 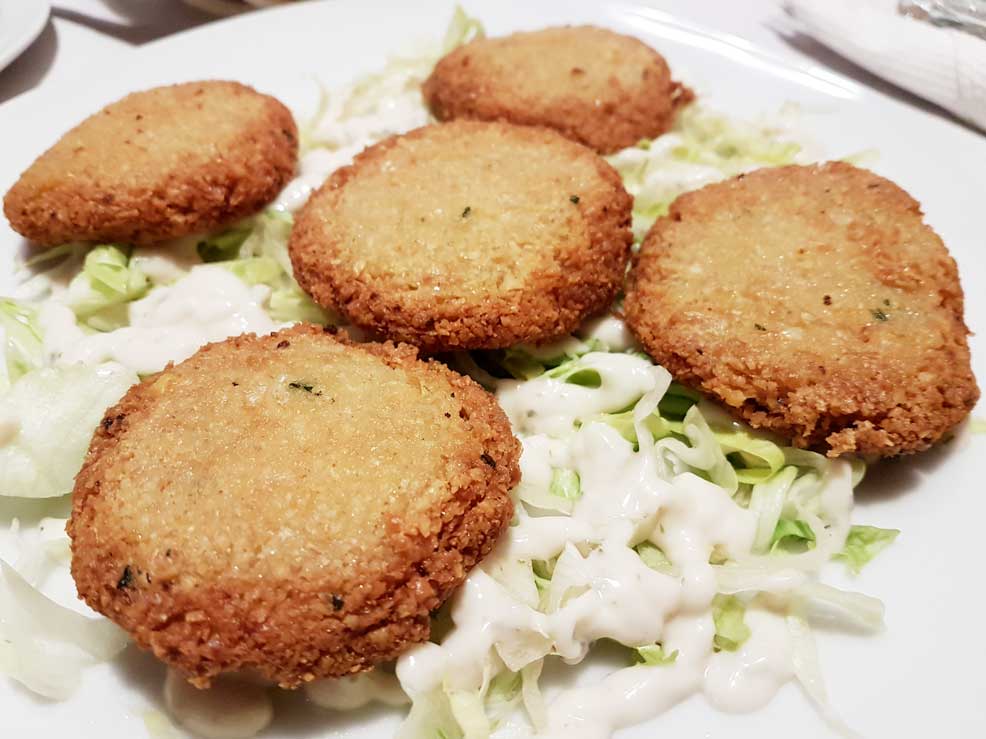 As in most Moroccan restaurants in Madrid and beyond, we were given a complimentary post-meal mint tea. This one wasn’t as sweet as others I’ve had in Lavapiés – indeed, the sugar was optional. 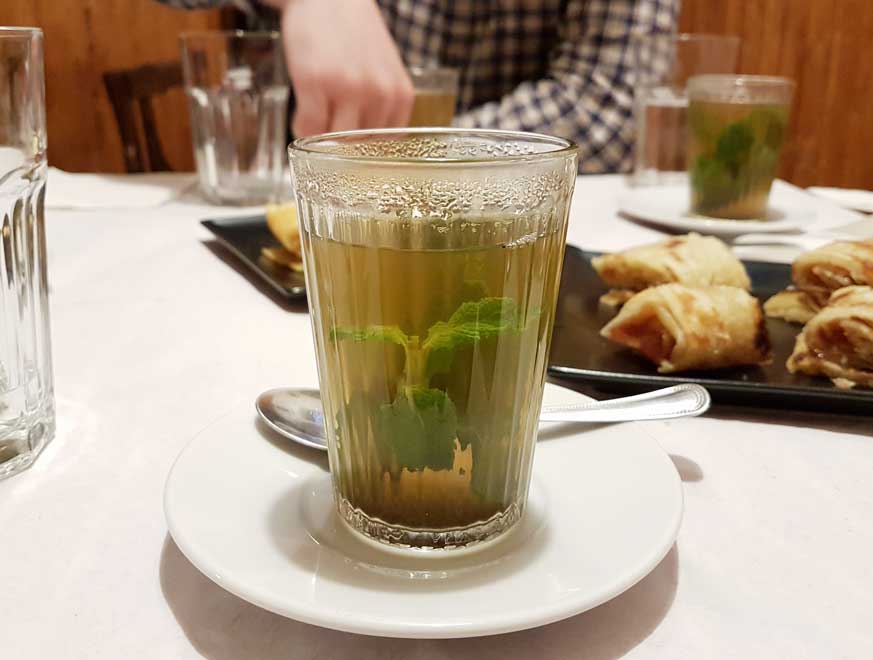 Below are the happy hands of friends who came along for the no-frills adventure, tucking into tea and a dessert of Moroccan breakfast breads, which you can also buy at these shops in Lavapiés. 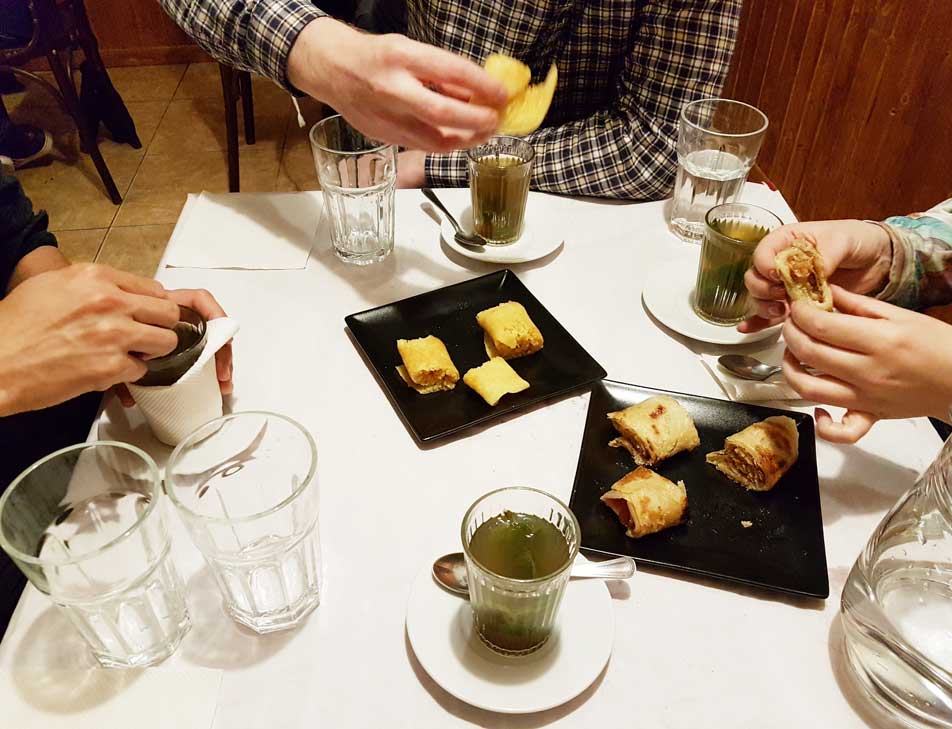 Like many authentic Moroccan restaurants in Madrid, Ikram doesn’t serve alcohol. If you’re after a pre-dinner no-frills tipple, Peñalaire is just around the corner, but be careful not to fill up on their generous tapas before dinner!