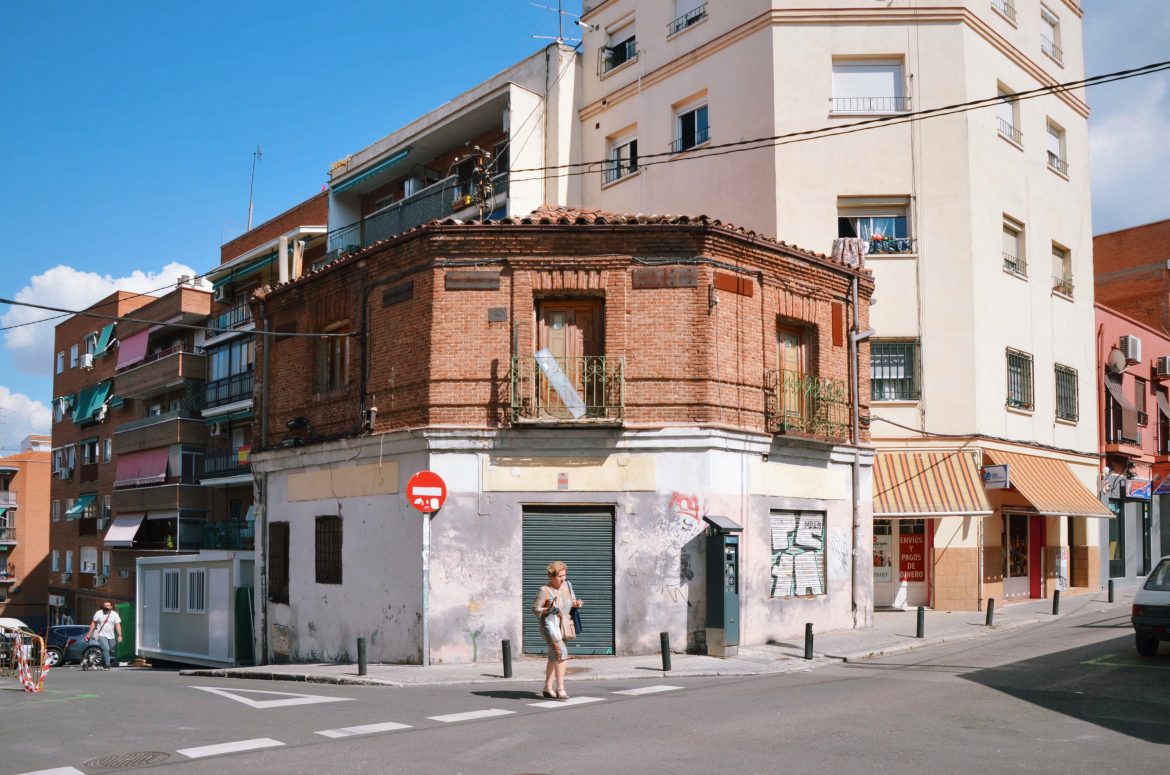 The creators of the grand and ornate red-brick buildings you can find all around Madrid are the same architects, builders and brick merchants who built the pretty little casas bajas in the barrios of Tetuán, Vallecas and Carabanchel. Look closely at Las Ventas bullring, one of Madrid’s most famous examples of Moorish Revival architecture, and find the same intricate brickwork decorating little houses all around Madrid.

In the 19th and 20th centuries, Madrid was in the process of becoming the expansive capital city she is today. Construction workers building the Neomudejar buildings in the city would take their skills to their own homes in the outskirts. Equipped with ancient artisanal knowledge, they headed to the edge of the capital, which was then countryside, to build their own mini Neomudejar masterpieces. Little did they know that, in the process, the barrio of Tetuán would accidentally become an important part of Madrid’s history and a barrio that neighbours are fighting to preserve.

Over the years, owners of these one-storey self-built houses have passed away and their homes have been demolished to make way for multi-storey utilitarian residential blocks. Fortunately, around 100 original mini Neomudejar homes are still standing and there’s a neighbourhood association in the barrio fighting for them to be preserved.

It all started with a campaign to save the building at Calle Bravo Murillo 315, a typical example of the first peripheral Neomudejar houses that were built in Madrid. The building had been abandoned and the owner wanted to demolish it but there was a swift intervention – reminiscent of Peironcely 10, the shrapnel scarred building in Vallecas that will be turned into Spain’s first Spanish Civil War museum.

The neighbours of Tetuán began searching Madrid City Council’s Catalogue of Protected Buildings and verified that this building was, in fact, one of them. But, they found out that this listing was open for review, and that’s where the idea to locate and list the Neomudejar houses of Tetuán came from.

By walking the streets, a group of around 40 neighbours have mapped more than 100 Neomudejar houses in Tetuán. They call themselves the Grupo de Protección del Patrimonio de Tetuán (Tetuán Heritage Protection Group) and here’s their map:

While many of these houses are lived in, some are squatted and others are empty and semi-dilapidated. Some are in perfect condition, having been maintained over the years, and others have been whitewashed but secretly retain the intricate brick patterns under the plastered facade.

Despite the brickwork being plastered over, interesting iconic details of these buildings remain, such as curved bases of the building possibly for reinforcement, or perhaps simply for decorative purposes. This would be the opposite of utilitarianism, the architectural concept that shapes how most modern residential properties are built.

Some of the Neomudejar-style houses in Tetuan also have a front door step – a small and social piece of outdoor space to sit on while keeping an eye on the kids as they play.

Many of the houses, however, are so old and run-down that they are essentially slum dwellings, so the Tetuán Heritage Protection Group is pushing for funding for the interiors to be renovated with the aim of preserving the whole building. They hope their map will make local residents and the city council aware of the Neomudejar houses, which will help push the overall cause.

But it’s not just the beautiful buildings that the neighbours want to preserve; it’s their story too – the history of the working class way of life that still defines this barrio. As seen below, this history is illustrated in a photo hung on the facade of a Neomudejar building.

To the visitor, Madrid feels like a wealthy city. In the centre and in many barrios, it is – but there are neighbourhoods where income is far below the national average. Following the 2008 financial crash and a decade of austerity, the wealth gap between neighbourhoods has grown. In fact, Tetuán is where one of the richest parts of Spain borders one of the poorest, and its streets can tell you the full story.

Paseo de Castellana marks the point where the winding alleys of Tetuán end and the wide avenues of the business district begin, and where architecture, wealth and ethnicity change from one metre to the next. But it’s because Tetuán remains one of Madrid’s poorest neighbourhoods that these Neomudejar houses still exist, for it wasn’t too long along ago that the streets looked like this…

Almost all of us had animals, chickens, rabbits, pigeons, cats, dogs. No cars passed by, there were no telephones, only a few of us had water and electricity at home. We used coal, and it warmed up the whole house.

Although the houses in this photo are not Neomudejar, their preservation is still important. Six of the same houses in the photos above still exist today, while the rest of the bungalows have been demolished over the years and replaced with multi-storey flats. However, if this were Lavapiés, where real estate is much more expensive per square metre, there would be no chance of a one-storey house surviving when the landowner could profit by building vertically on a small plot of land.

On almost every street in Tetuán, there are empty plots where Neomudejar houses once stood. After a 10-year post-crisis lull in construction work, Tetuán is once again in the process of reconstruction – and neighbours fear that many more Neomudejar houses in their barrio will be destroyed. They’re staunch believers that preserving what is left brings historical value to the neighbourhood, one of the first features of community that the capital-driven property industry destroys.

We can be glad that the neighbours of Tetuán have awoken to the significance of their neighbourhood’s history just in time (somewhere between pre- and post-crisis demolitions and construction). Their work to preserve their Neomudejar housing means that Tetuán will now forever be a barrio-wide living museum to Madrid’s working-class history.