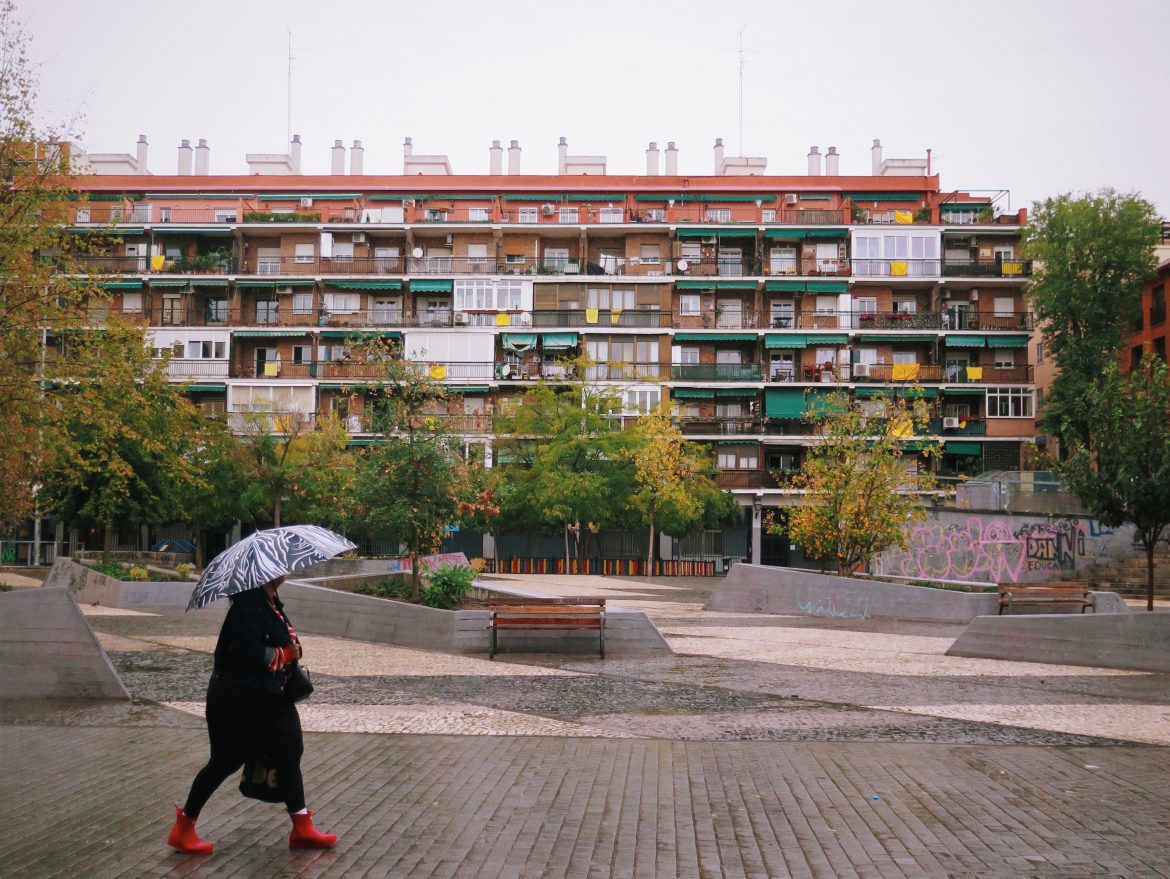 I’ve been a resident of Lavapiés for almost 10 years. In that time, even though a lot has changed, there have been a lot of constants. Police are everywhere. Gentrification – the systematic loss of the barrio’s traditional bars, shops and markets – is a day-to-day reality here. On most streets, spray-painted bedsheets hang from balconies expressing an array of concerns from noise pollution and touristification to drug dealing and evictions. Large tour groups that snake through our streets and cluster on our squares have long incorporated the stories of our struggles into their voyeuristic spiel.

While for many, life in the barrio is not an easy one, something I’ve always been able to say is that I feel safe here, but I know that those who don’t live here don’t generally believe me. When I first moved here and wanted to live in the neighbourhood, an estate agent who had one property in Lavapiés refused to show us it. Some years later, on finding out I lived here, one of my students insisted I took his personal number and told me that if I ever needed help, he’d come. Even now, when an outsider finds out I live in Lavapiés, they seem surprised.

I suspect the stigma associated with Lavapiés is connected to it being the most visibly ethnically diverse barrio in the city. Enter, and you’ll quickly see Bangladeshi restaurants receiving large deliveries of tropical fruits and vegetables, friends braiding each other’s hair on benches, and commuters queuing for Indian sweets on their way home. Far too many who visit, however, hurry past these scenes to the wildly busy four-euro-for-a-coffee shops we’re seeing more and more of here, then quickly leave again without ever truly interacting with the neighbourhood.

To those who don’t live here, it should go without saying but, did you know that most foreigners who live in Lavapiés have a permanent residence permit and rent or own a flat legally? We work, we pay our taxes, send our kids to the local schools, catch up with each other on squares while collectively watching the kids play nearby. We’re members of local associations and political parties and are constantly trying to improve the neighbourhood for everyone who lives here and visits it.

But this isn’t the Lavapiés you see in the news – it never has been and still isn’t. And in the past month, press having been coming here every day and adding to the stigmatisation. The word “narcopiso” (drug den) rolls off the reporters’ tongues like it’s just part of the barrio’s furniture, commenting on drug users like they’re not even human beings but roaming cancers that must be violently removed. Journalists say that this is a neighbourhood of drugs, violence, and delinquency, and how a constant police presence is required. All are failing to tell the full story.

Yes, we have problems here and they’re getting worse, but is it just a coincidence that there’s an election round the corner? And that, suddenly, there are very few patrolling police compared with a month ago?

After almost four years of sitting on their hands, Madrid City Council is finally taking action in the city (roadworks and renovations) because they’ve got an election to fight. But everything they’re doing feels like one step forwards and two steps back. For example, they’re renovating streets but chopping down trees. They’re fixing potholes but replacing cobbles with tarmac.

Another example – one very big thing on the council’s bucket list – is ‘dealing with okupas’ and the most prominent one in Lavapiés is La Quimera on Plaza Nelson Mandela. Last month, police evicted 70 people without offering alternative housing, despite saying that they did offer it. I was there and I have a video recording of Samur Social staff telling eight former residents of La Quimera that “there are no beds.”

Undocumented migrants had been living in the block, built in 1970 and immediately abandoned. These people – some of them minors – are the same people you see footage of in crowded rubber dinghies or being beaten by police at the Ceuta and Melilla border crossing. They survived one of the most dangerous crossings in the world for a better, more dignified life, and I’d bet you anything they weren’t drug users when they got on that boat or climbed that fence.

But, without any social care or support from the government, which are the same basic human rights afforded unconditionally to EU citizens here (except for Cañada Real residents), some find themselves living rough in Lavapiés while dealing with PTSD from their journey here. And drugs are prevalent in this neighbourhood, so combine easy access to hard drugs with homelessness, mental health issues, social exclusion and, to top it all off, the retreat of police patrols in the neighbourhood, and it’s no surprise problems increase.

The people who were evicted from La Quimera are still in the neighbourhood, taking it in shifts to sleep a couple of hours at a time while their friends watch over them. I see them doing this, and I saw them approach Samur Social last month. These people are human beings whose situation of vulnerability could be temporary if only they could access social services.

Coming back to the topic of police presence. In the last month, there have been very few police patrols in Lavapiés. For the past 10 years, you could almost guarantee there’d be a police car parked on Plaza Nelson Mandela day and night. Now, for some reason, the force has retreated almost completely. And, at the same time, new security cameras are being installed around the barrio, which are not the solution.

The situation of institutional abandonment and insecurity in Lavapiés has reached tipping point and, in response, many residents have joined a new neighbourhood initiative called #LavapiésDenuncia who hang yellow flags from their balconies to express their frustration. The Twitter account also posts photos and videos of fights and drug use in the neighbourhood, but the people in the footage aren’t, in my opinion, the culprits. In the 10 years I’ve lived in Lavapiés, I’ve never felt so abandoned by the local government, and it cannot be overlooked that we’re now in election mode.

One could be forgiven for thinking that the current Madrid City Council is using their power to make Lavapiés look, feel and be a less safe place so that they can swoop in at the last minute and rescue us with a short-term shock injection of authoritarian policing followed by a return to daily police intimidation. Therefore, whatever the #LavapiésDenuncia movement does, it needs to be careful not to request unconditional state intervention. But, at the same time, the barrio also can’t be left to self-manage this situation.

The Lavapiés community is doing as best we can but, for the first time in 10 years, I’m sad to say that I no longer feel safe in Lavapiés. Instead of the council playing us in a cruel game of ‘be careful what you wish for’, we need long-term investment in social care, housing support and the regularisation of immigrants already here.

In Lavapiés, all of us have the right to be safe.

“In Lavapiés, all of us have the right to be safe” was last modified: October 21st, 2022 by Madrid No Frills
Share:
Previous Post

The reality is clear ; many groups of different people hold different values and beliefs that can never reconcile.
The liberal world view of unceasing tolerance and acceptance will not work.
Instead, more atomisation, individualism and disconnection from the people and places around us.